Essay on Traffic Problems: The development in the world has given us many gifts but not without its bane. Travelling to faraway places has become more comfortable and quicker due to the boom in the automobile industry. But it comes with the limitations of traffic jams. One of the perils of living in the cities is a traffic jam.

As we see development in the automobile industry, there is a rise in traffic problems on the road. Traffic is movement as of vehicles and pedestrians through an area or along a route. The fundamental problem of traffic arises when many people commute at the same time and cause congestion on the road. There is an increase in the demand for vehicles, but the roads’ condition leads to traffic problems. To solve the pain caused due to traffic jams, people are coming up with new and more straightforward commuting solutions. The government has also started many campaigns on traffic problems to enlighten the citizens of the country. People try to use public transport or share their rides to stop traffic congestion. They avoid going out in peak traffic hours. Living with congestion is a problem everyone wants to fight and get a smoother flow on the road. 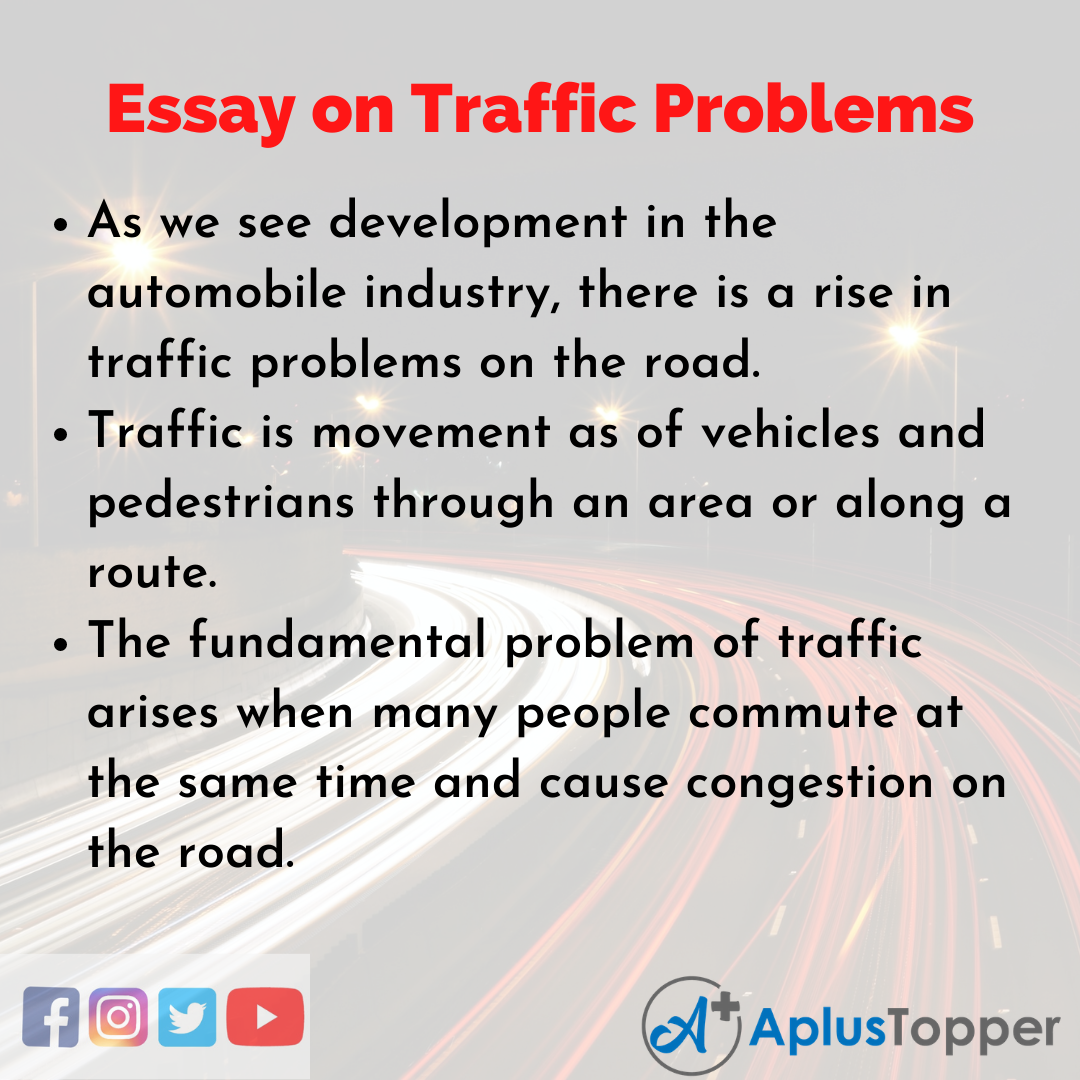 Life in urban cities is running day and night. People have places to reach and workloads to finish. The population explosion is seen not only in the graphs but on the roads too. The primary time of a human being living in a city spent on-road commuting between the office and home. The primary cause is traffic on the road for delaying a person to reach their destination. The primary reason for traffic congestion on the street is the growth of industry and the economy. People have to go office simultaneously, so peak hours are on the road when the congestion is high.

Self-awareness is there in the citizens regarding this issue. The government is also taking many measures to eradicate the traffic problems. People prefer to take public transport during peak hours to avoid heavy traffic. Roads widened to meet the demand of the traffic on the road. Traffic police are more vigilant to avoid unnecessary blockages on the way. Sometimes the streets are blocked for V.I.P movements; it leads to traffic blocks. It will be joined the effort by citizens and government to bring changes in the traffic problems.

Introduction to Essay on Traffic Problems: The traffic problem is one of the common problems in metropolitan cities around the world. Cities like Delhi, Mumbai, Tokyo, Shanghai, Beijing, and other cities in the US and Europe face traffic congestion daily.

The urban transportation system is a big challenge for the governments because it requires a state of the art Vehicles and a state of the art roads designed for public transport. There are many reasons for traffic problems, but the aftereffects of getting stuck in traffic for long are only frustration and anger.

Problems Due to Traffic

Traffic jam is a part of our daily lives. It is one of the primary causes of air pollution and noise pollution. The government and concerned citizens are taking a lot of measures to avoid traffic problems. The use of public transport is encouraged by the government. Carpool is a powerful solution to avoid bringing a lot of cars on the road. The citizens strictly follow traffic rules; the government’s role is to check that all the traffic rules followed. The traffic control system needs t controlled, and road infrastructure needs to improve as a government’s duty. Improvement in public transport infrastructure is a must to encourage people to use it more often. It is possible to prevent traffic problems, but we need to work sincerely on it. 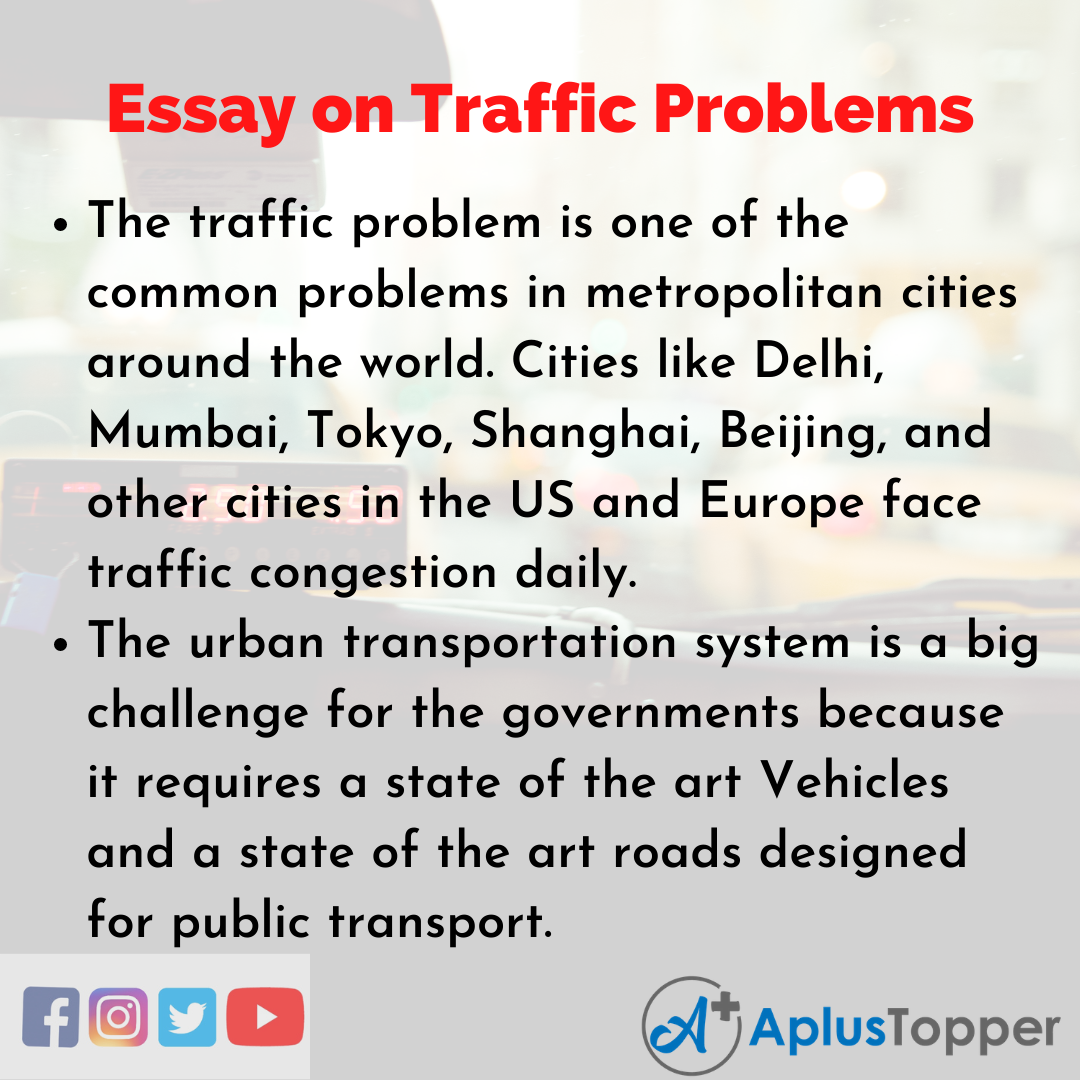 Introduction to Traffic Problems Essay: The modern dilemma in general people as rightly quoted by Paul Mc Cartney” I think the idea of getting out of a traffic jam and getting out of work each week and going and doing all this stuff would be exhausting.”A significant chunk of the time of the day spent on the road due to traffic congestion. It seems like a specific condition in progressing metropolitan and urban cities. Nobody likes to get stuck up in traffic for long hours.

Traffic is a Problem

As the automobile industry is booming day by day, our roads are boom with cars daily. The primary reason for the increase in traffic is

In simple words, the transport network’s major problem is increasing vehicles and roads’ overuse. Generally, we all have got used to traffic around us but underlining the silver line in this black cloud makes people angry and frustrated. The problems which arise due to traffic are

A big issue can be seen by the general people of the country and the government too. The solution is to work together. Some of the measures which followed are

How Can We Avoid Traffic?

Traffic congestion has become a global problem because sitting idle and unproductive for long hours in the car is a significant problem for most countries. Studies show that on average due to congestion Boston loses 164 productive hours, New York City, Los Angeles, Seattle all lose almost 100 productive hours.

Pondering at the Red Light

In the end, red light is where waiting for minutes sometimes hours a lot of thoughts come into our mind. Our choice of how we spend that time, generally getting tired and frustrated is the answer. By J.G.Ballard,” People nowadays like to be together not in the old-fashioned way of, say, mingling on the piazza of an Italian Renaissance city, but, instead huddled together in traffic jams, bus queues, on escalators and so on. It’s a new kind of totally alien, but it’s the togetherness of modern technology.”  Even if traffic is a problem in our lives, but with continuous efforts, we can indeed find a way to solve it. Living with congestion is not a solution to our problem but at present an unavoidable circumstance.