Essay on to Kill a Mocking Bird: A novel by Harper Lee, To Kill a Mockingbird was published in 1960. It was an instant success and was widely read in middle schools and high schools of the United States. The novel became a classic of the modern American literature and won the Pulitzer Prize.

The plot of the novel and the characters are based loosely off of Lee’s observation of her family, her neighbours and an event that took place near her hometown of Monroeville, Alabama when she was ten in 1936.

We provide students with essay samples on a long essay of 500 words and a short essay of 150 words on the topic To Kill A Mocking Bird for reference.

The novel To Kill a Mockingbird takes place during the Great Depression and is set in the fictional town of Maycomb, Alabama. The protagonist of the story is an intelligent though unconventional girl named Jean Louise (“Scout”) Finch, to ages from six to nine years during the course of the novel. Their widowed father, Atticus Finch, raise her and her brother Jeremy Atticus (“Jem”). Atticus Finch is a well-known lawyer by profession, and he encourages his children to be and empathetic. He particularly tells them that it is “a sin to kill a mockingbird”, implying to the fact that birds are harmless and innocent creatures.

When one of the town’s black residents, Tom Robinson is falsely accused of raping Mayella Ewell, a white woman, Atticus decides to defend him despite the threats from the community. At one point, Atticus faces a mob intent on knocking off his client, but he refuses to abandon him.

Scout unintentionally diffuses the situation. Even though Atticus presents a dense that gives a more reasonable interpretation with evidence – that the woman, Mayella was attacked by her father, Bob Ewell – Tom is convicted. However later he is killed when he tries to escape custody. A character in the novel compares Tom’s death to “the senseless slaughter of the songbird.” The novel To Kill a Mockingbird showcases both a young girl’s coming-to-age story as well as a darker drama about the roots and consequences of racism and prejudice, exploring how the good and the evil can co-exist in an individual or a community.

Scout’s moral education is bifold – to refrain from abusing others with unfounded negativity but also to preserve these values when they are inevitable and sometimes even violently subverted. The writer has based the character of Atticus Finch on her father, Amasa Coleman Lee, a dedicated and compassionate lawyer. The plot of the novel was inspired by his unsuccessful youthful defence of two African-American men who were convicted for murder.

One character of the novel Charles Baker (“Dill”) Harris, is based on the author’s childhood friend and next-door neighbour in Monroeville, Alabama – Truman Capote. After the extraordinary success of the novel, many suspected that Capote was the real author of Lee’s work. This rumour was put to rest when in 2006, a letter written in 1959 from Capote to his aunt was discovered, stating that he read and liked the draft of To Kill a Mockingbird that Lee had shown him, but there was no mention of any role in writing it.

The novel had inspired numerous adaptations out of which the most notable one was the classic 1962 film that starred Gregory Peck as Atticus. His performance in the movie won him an Academy Award, and it became an enduring part in the history of cinema. There were other adaptations which included a Broadway play that was adapted by Aaron Sorkin and debuted in 2018.

In 2015 Go Set a Watchman was a second novel released by Lee. This had been written before To Kill a Mockingbird but essentially was a sequel that featured Scout as a grown woman now based in New York City who returns to her childhood home, Alabama to visit her father. 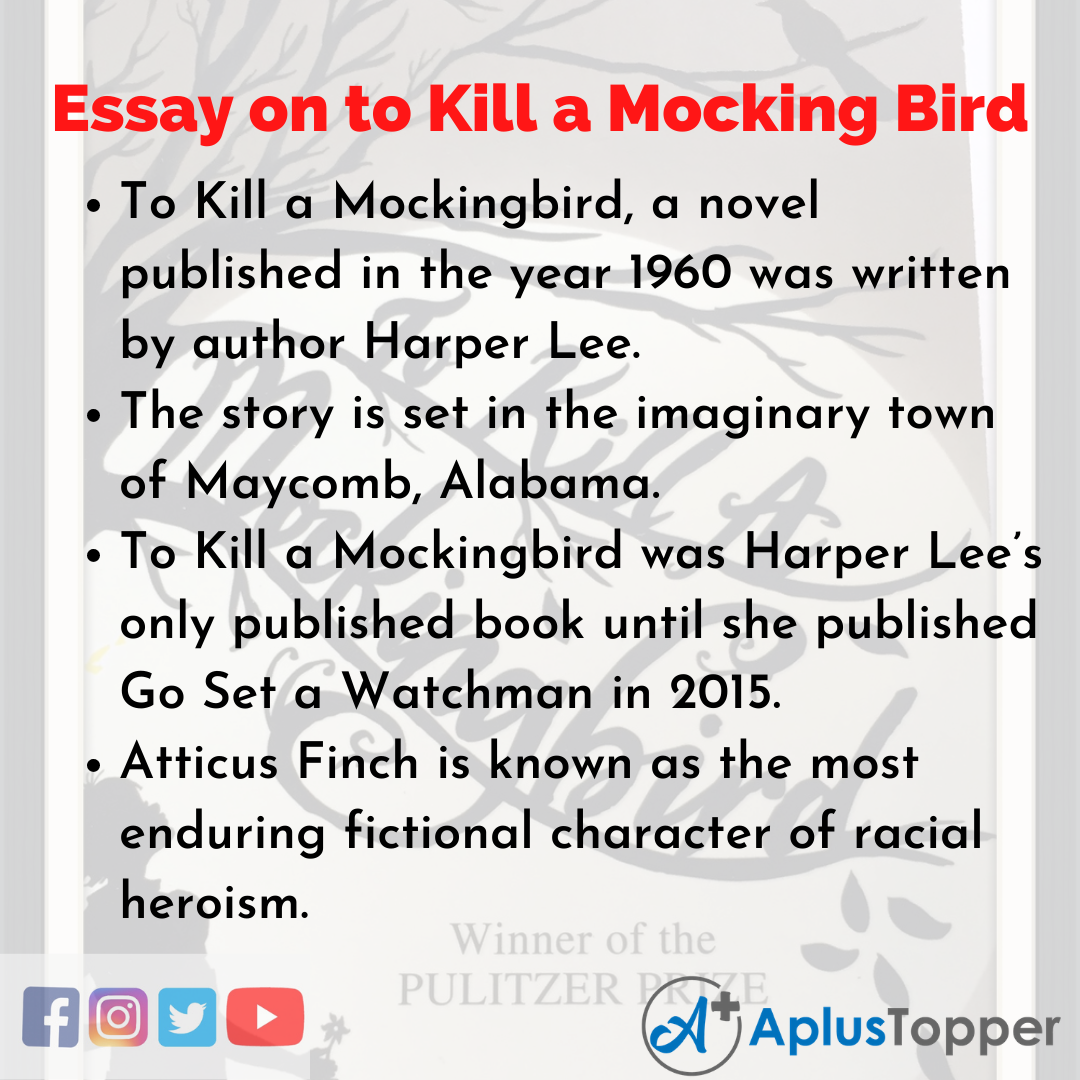 To Kill a Mockingbird, a novel by author Harper Lee was published in 1960. The book gained enormous popularity and has been translated into some 40 languages. The novel was read throughout all middle schools and high schools in the United States. More than 30 million copies were sold worldwide.

In the year 1961, the novel won a Pulitzer Prize. The novel received appreciation for its sensitive and sensible treatment of a child’s awakening to racism and prejudice in the American South. The plot and the characters of the novel are loosely based on Lee’s observation of the people near her.

Even though dealing with serious issues such as rape and racial inequality, the novel is well-known for its humour and warmth. The narrator’s father, Atticus Finch, has served as a hero of morality for many readers and also as a model of integrity for many lawyers.

10 Lines on to Kill a Mocking Bird in English 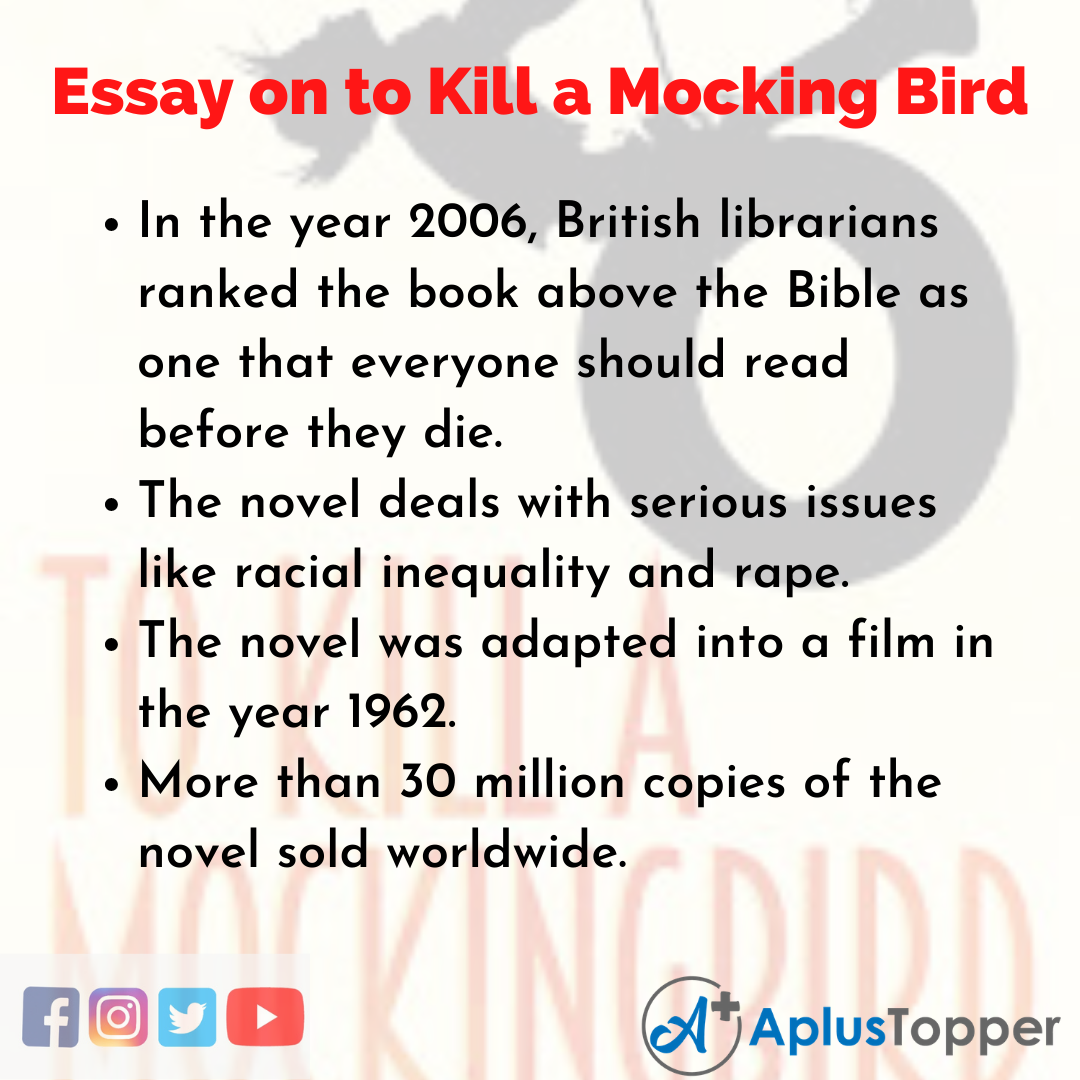 FAQ’s on to Kill a Mocking Bird Essay

Question 1.
When as To Kill a Mockingbird published?

Answer:
The novel To Kill a Mockingbird was published on 11th July 1960.

Question 2.
Which is the other novel published by Harper Lee?

Answer:
Go Set a Watchman published on 14th July 2015 is an earlier draft of the novel To Kill a Mockingbird.

Question 3.
Who is the protagonist of To Kill a Mockingbird?