Essay on Taj Mahal with headings: The Taj Mahal is a historic and the most beautiful place world. The cultural monument is located in Agra, Uttar Pradesh, India, and holds a symbol of love. This seamless beauty is constructed using white marbles and is a hotspot of tourist attraction. The Mughal Architecture represents cultural diversity prevailing in the country and is identified as UNESCO World Heritage Site the year 2007. Below this historic paradise lies the tombs of great Indian kings and queens cremated in the darkroom.

The great Rabindranath Tagore refers to the Taj Mahal as ” the dream of marble.” Located on the banks of the river Yamuna, the green atmosphere surrounding the monument increases the fragrance of the environment. The monument’s view gets brightened by the beautiful moonlight dawned at night.

To assist students and children with relevant information on the topic, here is a long and essay that guides the students through their assignments. Additionally, ten summarized pointers are given as a form of a basic framework for comprehension. Below-mentioned is a descriptive essay on 450-500 words and a short 200 words summarized article on the topic as a framework guide. Read on to find more about Essay on Taj Mahal for Class 2, Class 4, Class 5, Class 6, Class 8.

The Taj Mahal is the materialized vision of love and marks a perfect indelible remark on it’s Mughal Architecture. This historical monument is the mausoleum of Emporer Shan Jahan’s beloved wife, Empress Arjuman Banu Begum, most commonly known as Mumtaz mahal. The Taj Mahal is a complex comprising of the astonishing vision Ustad Isa Khan of Turkey, the chief architect of this historic monument.

The Taj Mahal now holds a renowned place in UNESCO’s World Heritage Site. The tomb contains a 17-hectare centerpiece. The Taj Mahal is located 2.5 km away from the famous Agra Fort and is a renowned masterpiece of the world holds a special place as the 7th wonders in the world.

About Taj Mahal, The conventional story behind the stunning 17th-century marble mausoleum is Emperor Shah Jahan’s eternal for Mumtaz, who died in childbirth. Historians believe that Shah Jahan remained heartbroken over the Empress’s death and ordered his court into mourning for two whole years.  To treasure all memories of his beloved wife, Shah Jahan undertook the task of building the world’s most treasured beautiful monument as a symbol of love. The construction of the imperial structure took almost 22 solid years with the labor of 22,000 workers. However, there are a few debates that question the construction of the Taj Mahal as a monument of love or guilt.

To invoke the memories of the Mughal era,  a 10-day annual event called the ‘Taj Festival’ is celebrated in February, in front of the Taj Mahal.

The grandeur of the Taj Mahal despite decades after construction resonates as the most attractive human-made tourist spot of the world. The Taj Mahal unveils five major structural components- the Darwaza or the main entrance, the Bageecha or gardens, the Masjid or Mosque, the Naqqar Khana or the rest house, and Rauza, the central mausoleum.

The Taj Mahal’s main chambers consist of pseudo-tombs perforated marble screens. Beneath this lies the shadowy burial crypt that homes the tombs of both the Empress Mumtaz and the Emperor Shah Jahan. The perforated screens transmit light into the grave and is a structure of typical Mughal mausoleum. The tombs hold semi-precious stone linings, and calligraphic inscriptions are found to be inscribed on the sides on Mumtaz’s monument, reveal ing the ninety-nine names, Allah. The Taj structures add great artistic wonder and architectural realm to the place.

Located on banks of the sacred river Yamuna, in Agra, Uttar Pradesh, the Taj Mahal is a royal artwork of multiple talented artisans and artists. The area surrounding the Taj holds many decorative elements such as grass lawns and trees that increase the fragrance of the environment. A few feet apart, at the foothills of the entrance pathway lies a fascinating fountain gleaming with water. However, due to the growing pollution, the white Taj marbles have reacted, leaving yellow-tinged surfaces. To protect the Mahal from further damage, the Indian government has enforced around 4,000-square-mile Taj Trapezium Zone, with strict emissions standards. This beautiful marble masterpiece gives immense pride to all Indians and is considered as a devout symbol of love. 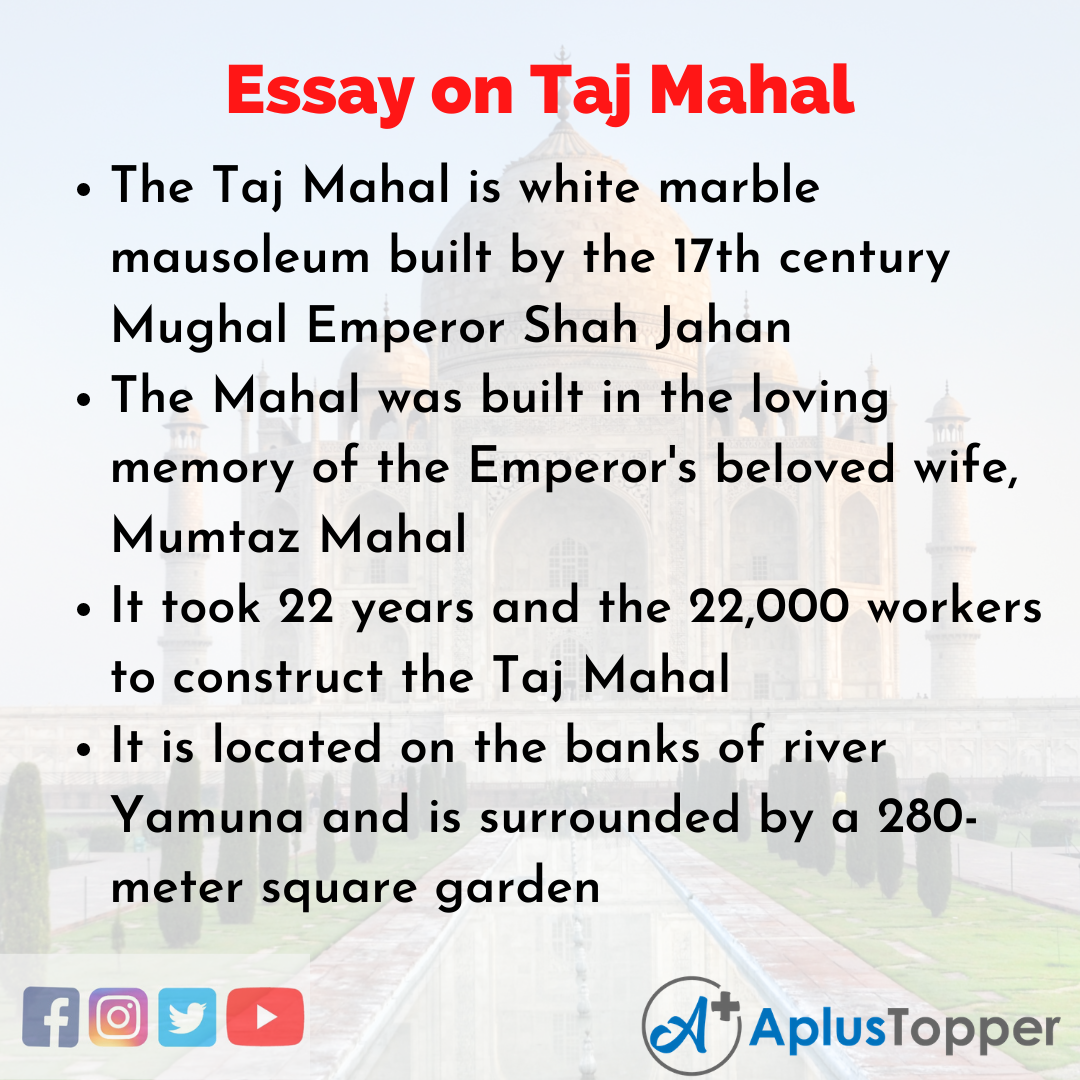 The Taj Mahal is one of the most magnificent Indian historical monuments with complex visualization. It attracts thousands of tourists with no preference for religion or lifestyle. No matter what nationality, people must various parts of the world remain mesmerized by this beauty. The words Taj Mahal means ‘ crown of the palace’ and is a symbol of eternal love. The ivory-marble realm is located on the banks of river Yamuna in the city of Agra, Uttar Pradesh, in India.

The monument unveils the story of the 17the century Mughal Emperor Shah Jahan. Shah Jahan reigned from the 1628-1658 period as the fifth Mughal Emperor and built the mausoleum after the death of his favorite wife, Mumtaz Mahal. It took Shah Jahan almost 22 years of  22,000 worker’s toil to complete the royal tomb.

UNESCO has placed the Taj Mahal as the World Heritage Site, and in 2007, it was identified as one of the seven wonders of the world. The architecture is a combined structure of diverse culture such as Indian, Parsi, Islam, etc. After the death of Shah Jahan, he buried at the Taj next to his wife.

The Taj Mahal is considered as a top tourist-centric spot with thousands of flooding visitors every year. 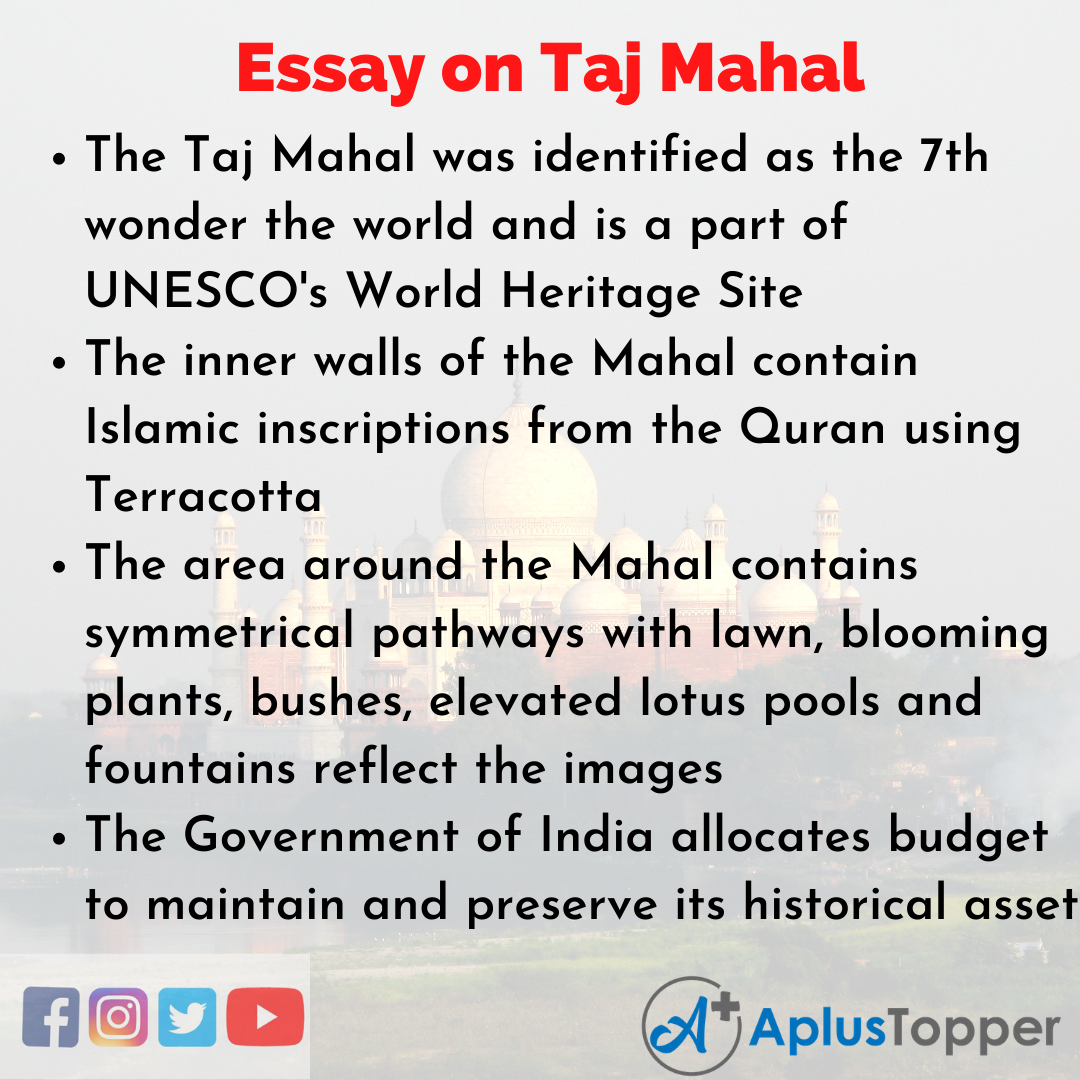 FAQ’s on Essay on Taj Mahal

Question 1.
Who constructed the Taj Mahal and Why?

Answer:
The Taj Mahal was constructed by the 17th century Mughal Emperor Shah Jahan in the memory of his beloved wife, Mumtaz Mahal, as an underlying symbol of eternal love.

Question 2.
Who ruled India after Jahangir?

Answer:
Shah Jahan was the fifth Mughal Emperor, and the richest person in the world. It is believed that during his reign, 27 percent of the world’s GDP was from India, therefore making him the richest man in the world. He is the son of Emperor Jahangir and the grandson of King Akbar.

Question 3.
Was Mumtaz the only wife of Shah Jahan?

Answer:
As per the historians, Shah Jahan was married four times. Mumtaz Mahal was a Persian and the most beautiful women of Persia. She was Shah Jahan’s second and most favorite wife. After her death, Shah Jahan built the Taj Mahal as a symbol of eternal love.