Essay on Power Of Youth: India, now aged 68 is one of the largest reservoir of youth population. ‘Youth’ refers to the age group of 16-30. This age group in India constitutes more than 40% of India’s population which is indeed a large force. Leadership of Adolf Hitler proved the importance of youth in nation building. The youth plays a significant role in today’s time. Today, the entire world is eyeing India as source of technical manpower. They are looking at our youth as a source of talents at low costs for their future super profits. Indian youth has the power to transform our country from developing nation to a developed nation.

Long Essay on Power Of  Youth 500 Words in English

Below we have given a long essay on Power Of Youth of 500 words is helpful for classes 7, 8, 9 and 10 and Competitive Exam Aspirants. This long essay on the topic is suitable for students of class 7 to class 10, and also for competitive exam aspirants.

On one side our history is full of examples of young people whose mere mention fills every Indian with pride; such as Prithviraj Chauhan, Swami Vivekananda, the great sacrifices of Chandra Shekhar Azad, Shaheed Bhagat Singh, Mangal Pandey. We owe our present to the youth of the previous generations who forsook their lives for the freedom of India. On the other side, today’s shining stars such as Mary Kom, Abhinav Bindra, Vijendra Singh are amongst some to bring India back the glory in the Olympic Games. Sachin Tendulkar, Kalpana Chawla, Subir Chowdhary, Satya Nadella, all have shown their charisma to the world.

Narendra Modi once said, “It is important how we view the youth of our nation. To simply consider them new age voter is a big mistake, they are the new age power!” The advantage with India’s big population is that it has huge number of youth population. By 2020, the working age population in India is expected to grow by more than 47 million people, the number far ahead to that of China or US. If we can harness 4his powerhouse of the nation in the right direction, then the country can reach untold heights. The creative potential of the younger Indians coupled with their zeal, enthusiasm, energy and versatility in the field of information technology, management and science have already proved wondrous to the world.

Sadly, our youth is losing touch with a sense of right and wrong or good or bad. This is because, as a nation, we have failed in our duty to capture their energy and mould it in the right direction.

Due to increasing unemployment, we have been unable to keep them busy in constructive work. Some of them are ignorant or are aspiring for their personal goals.The result is that nothing inspires our youth except short cuts to make money. Our politicians too have failed to harness the power of youth in a productive way. Youth is the best medicine to cure the social diseases, like corruption, casteism, regionalism etc. It would be a great national wastage of human resources if these strong hands are not allocated some suitable jobs. Dr APJ Abdul Kalam, our former president once exclaimed: “youth without relevant skills and knowledge can actually derail the economy and create more trouble for the country”.

Therefore, its high time that the policy planners of the country make plans to nurture the youth and their aspirations. In times of acute modernisation and innovation quest of knowledge of each youth will prove to be an asset. Education should prepare our youth for life. Youth of India must be able to come up with new ideas of entrepreneurship which is very vital for the country’s growth. Development of India should be their utmost priority. 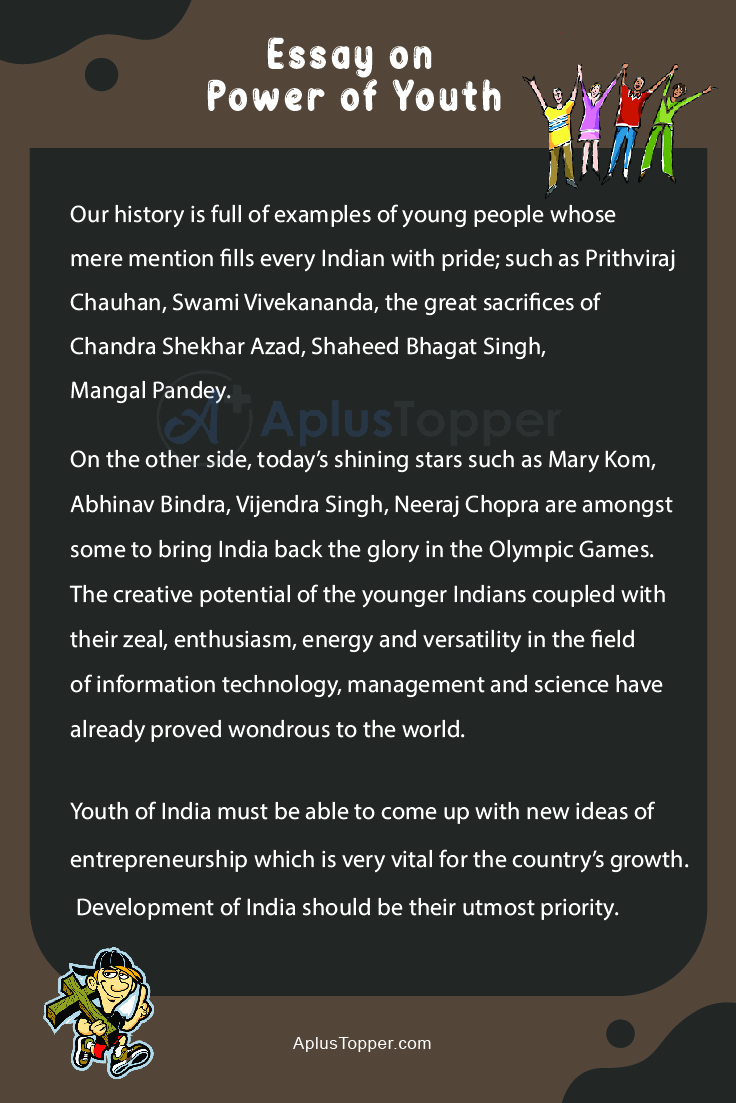 Short Essay on Power Of  Youth 200 Words in English

Below we have given a short essay on Power Of Youth is for Classes 1, 2, 3, 4, 5, and 6. This short essay on the topic is suitable for students of class 6 and below.

The example of Tata Tea’s Jago Re’ advertisements showcasing a young student’s fight against corruption, made him a ‘youth icon’ of the country where he makes the fellow youth aware of the reasons of corruption. In the same way films like Rang de Basanti revolutionised the thinking of youth of our country. The power, youth can wield was recently on display during the general elections when they played a crucial role in boosting the UPA’s campaign alongside Rahul Gandhi. During the riots against Mandal Commission in India, it was thousands of college students who agitated on the streets of the cities.

Youth has underplayed itself in the field of politics. They should become aspiring entrepreneurs, scientists, innovators rather than mere workers. They can play a vital role in elimination of terrorism. Indian youth has never lagged behind when called upon to meet a challenge. Being given a little dose of incentive, encouragement and support, they can make the great responsibility of fulfilling the targets. For this, certain steps need to be taken which should be more than tools and programmes, it requires role models who inspire. In the absence of any real model, youth feel lost and confused.