Essay On Parrot: Parrots are one of the fabulous bird on the planet. PSITTACINES is the scientific term for a parrot. The attractive color on a parrot’s body gives everybody a feeling of joy and happiness.

There are almost 339 species of parrot around the world. Parrots are generally found in warm regions. We can find different body color patterns on different parrot species. Those include rainbow color, yellow color, scarlet macaw shows red, and green color.Parrots are intelligent birds who can mimic human speech.

We are here providing students with essay samples on a long essay of 500 words and a short essay of 150 words on the topic essay on parrot for reference.

Parrots are mainly known for their colors, including single color, bright colors, and rainbow colors. These are small to medium-sized.

Parrots have a different life span compared to other species. Larger species of parrot, including cockatoos, Amazons, and macaws live for around 80 years. There are small species of parrots like love birds or budgies who live around 15 years.

Parrots are also said to be one of the intelligent types of birds along with the Crows, Jays, and Magpies. They can mimic human speech, which is one of their part of intelligence. However, the hunting and trapping of parrots have increased, which significantly impacted the wild populations of parrots.

For commercial purposes, parrots are a prevalent type. Different measures are taken in different parts of the world to make sure that parrots are treated well.

There are several characteristics and behavior of parrots, which include vivid colors, curved beak, and loud squawk, which they use as a signal purpose to demand their needs.

The parrot spends most of the time in tree canopies, hidden from their prey. Occasionally, they walk on the ground, and their body moves from side to side. A parrot’s diet is determined by its beak’s shape and the amount of food that they can chew and swallow. Most of the diet includes eating seeds, fruit, pollen, and buds. They also sometimes drink nectar and eat small insects. Parrots are very careful about the way they eat their seeds.

The seeds are covered with poisonous substances for protection, so parrots make sure to peel the seeds before consuming it.

Parrots are intelligent birds who can imitate the sounds of humans, which includes the words. Some parrots can put together with full sentences with accurate grammar along with numbers.

Parrots also can Interact with their siblings and can learn and mimic each other’s behavior. Parrots love to play because it serves them as a practice to protect themselves from the predators.

The young parrots must spend time with their species in their childhood as they learn to mimic different behaviors.

Humans love to keep parrot as their pets. Because of the different abilities of a parrot and their attractive colors, they catch much attention.

So, anyone who wants to keep a parrot as their pet should remember that a parrot needs a lot of attention and care. Parrots have an instinct of biting people when they are angry. So, make sure to train them.

Parrots can adequately grow and show off their talent if they are nurtured properly. So, make sure you keep your pet parrot healthy and happy. Parrots are a magnificent bird with a lot of intelligence. They have a red mouth, and the Quills are green. Its nose is bent, which is very solid and pointed.

The parrots can fly quickly, and generally, they fly in herds. They live to a decent maturity. Parrots can speak. They learn from the words which are spoken in front of them over and over. Parrots can learn numerous things.

Because of their lot of abilities, humans love to keep parrots as their pets. But nurturing them is very important. Giving them healthy food and training them will help in their growth.

10 Lines On Essay on Parrot In English 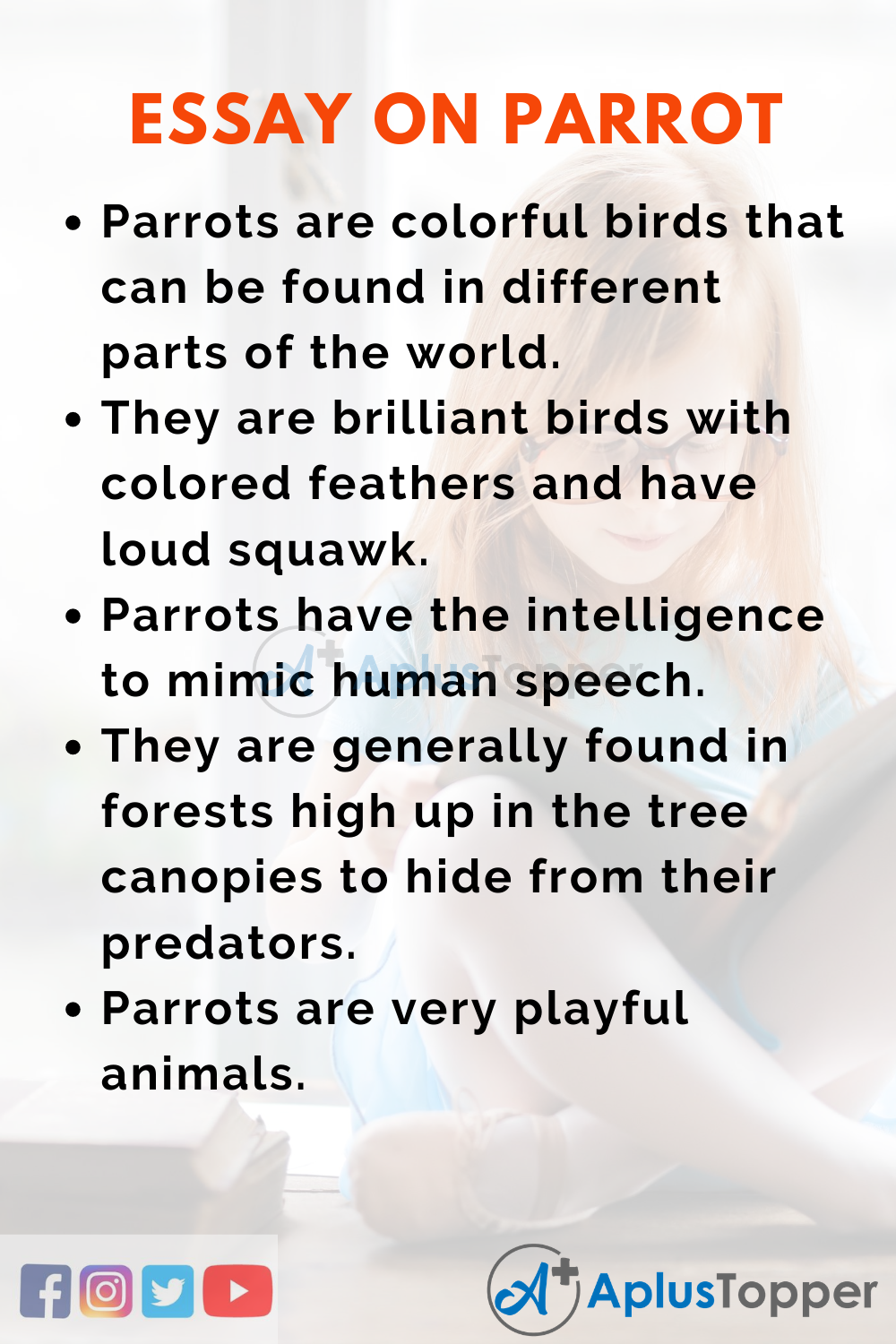 FAQ’s on Essay on Parrot

Question 1.
Explain the description of the parrot.

Answer:
Parrots’ body is covered with green feathers. Parrots have a long tail, and the color of the parrot’s beak is red. The beak is round and slightly bent, which is quite sharp.

Question 2.
How can parrots be useful?

Answer:
Parrots are brilliant birds who can mimic human voices and sounds. Parrots are used in circuses, and tarot card reading.

Question 3.
Where can we find parrots?

Answer:
We can find parrots in both tropical and temperate regions of the world.

Question 4.
Why are humans attracted to parrots?

Answer:
Humans are attracted to parrots because of their intelligence. Parrots can easily mimic sentences from a human.