The issue due to ocean acidification is a decreased production of the shells of shellfish as well as other aquatic life that have calcium carbonate shells. The marine and coral ecosystems are under extreme stress from climate change. Ocean acidification poses a real threat to the survival of many marine species.

We provide students with essay samples on a long essay of 500 words and a short essay of 150 words on the topic of ocean acidification for reference.

Even though this helps reduce the rate of atmospheric warming and climate change, it also has an immediate chemical effect on seawater known as ocean acidification.

Since the industrial revolution, for more than 200 years, the concentration of carbon dioxide in the atmosphere has increased because of the burning of fossil fuels and land-use change.

The ocean water absorbs about 30 percent of the carbon dioxide, which is released into the atmosphere. As the levels of carbon dioxide increase, so does the sea level.

Carbonated icons are an essential building block from structures such as shells and coral skeletons. Decreased carbonate ions can make the building and maintaining of shells and other calcium carbonate structures difficult to calcify organisms such as clams, sea urchins, oysters, shallow water corals, and calcareous plankton and deep-sea corals.

These changes in the chemistry of the ocean can affect the behaviour of the non-calcifying organisms as well. Certain fish’s – which can detect predators – are being decreased in more acidic waters. As these marine organisms are at risk, the whole food web might also be at risk.

Ocean acidification affects all the oceans in the world, along with coastal estuaries and waterways. Several economies are dependent on shellfish and fish, and people worldwide depend on food from the oceans as their leading sources for protein.

Marine scientists are also worried that the process of ocean acidification possesses a severe threat to marine life and the cultures which depend on the ocean for their livelihood and food.

Ocean acidification also has an adverse effect on the health of humans. Humans are intricately linked with the health of the ocean. We humans have relied on the ocean for resources such as food, recreation, medication and transportation. One of the most apparent connections is with seafood.

One of the most effective ways for limiting ocean acidification is to act on climate change – implementing solutions dramatically reducing the use of fossils fuels. When global warming emissions are controlled, future warming will be limited, eventually decreasing the marine ecosystems’ harm.

The oceans in the world’s Polar Regions – in the Arctic and Antarctic – are especially sensitive to ocean acidification. The Bay of Bengal in India is another main focus of research, partly because of the unique seawater characteristics and partly because of the poor data coverage with the use of traditional methods. Ocean acidification implies a reduction in the ocean’s pH levels over a long period of time, which is caused primarily due to the uptake of carbon dioxide from the atmosphere.

The pH of seawater in present-day is highly variable, and a single organism can manage in the fluctuations of different pH levels during its lifetime. One of the main problems with ocean acidification is the change’s sustained nature. The rapid pace of acidification might influence the extent to which calcifying organisms will be able to adapt.

Ocean acidification can have a negative effect on the marine ecosystem, which causes the shells and skeletons of organisms made with calcium carbonate to dissolve. Animals that produce calcium carbonate structures have to spend extra energy to repair their damaged shells or thicken them to survive.

The shellfish’s ability to build their shells will be impacted. Also, lower pH levels will have an effect on the metabolism of several organisms.

10 Lines On Ocean Acidification In English 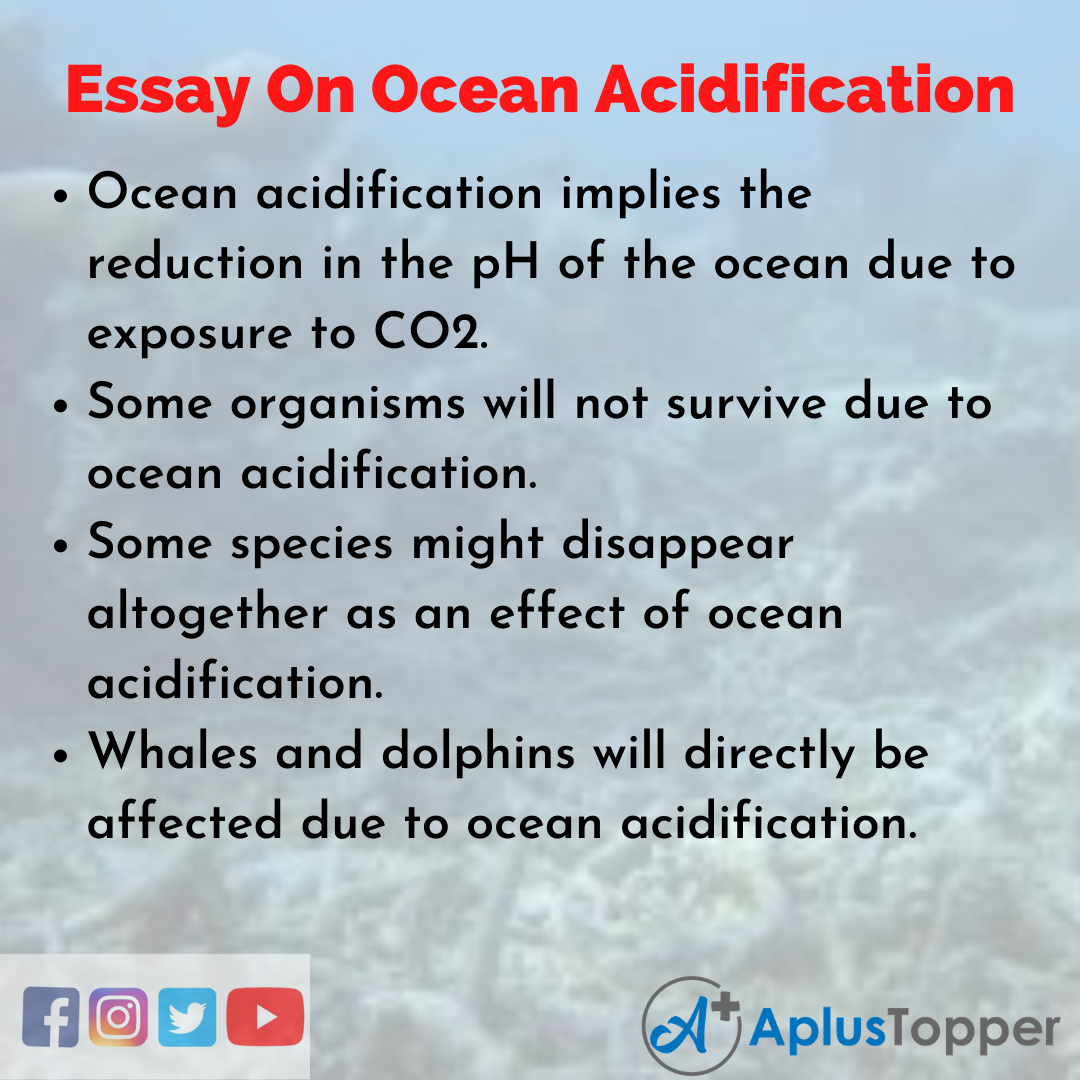 Question 1.
How serious is ocean acidification?

Answer:
The overload of CO2 in the seawater is causing sea changes, threatening fragile, finite marine life and livelihoods, food security and local to global economies.

Question 3.
Which animals are majorly affected by ocean acidification?

Answer:
Shell-forming animals such as crabs, corals, oysters and urchins will be first hit by ocean acidification.