Essay on Lotus: The Lotus symbolizes beauty, purity, and knowledge. The flower is the National flower of India. It is of aquatic origin with round leaves patterning on the water.

The Lotus is considered sacred and used for religious purposes and decoration purposes in temples and religious occasions. The flower also symbolizes the principle of the Eightfold path. It is cultivated widely in a semi-tropical climate.

We provide students with essay samples on an extended essay of 500 words and a short piece of 150 words on Lotus for reference.

The Lotus is also commonly called as Indian Lotus, Kamal, Padma, and Sacred Lotus. The scientific name used for biological reference is Nelumbo nucifera. Adoption of the word for Lotus took place in the year 1950. These flowers are present in native to South-Eastern Asian countries; widely cultivated in Australia, Europe, Japan, and America. It is grown in stationary water bodies like ponds, lakes, and artificial pools. The average dimensions of the flower are 1.5 cm in length, and the horizontal spread of 3 m. the average diameter of leaves is 0.6 cm, and flowers are 0.2 m. the average number of petals is 30.

Lotus symbolizes spirituality, fruitfulness, wealth, knowledge, and illumination and is India’s National flower. The National flower of a country should represent the culture, history, and heritage of a nation. It symbolizes the country’s image to the world and plays a part in upholding the government’s qualities.

The most crucial feature of Lotus is that even after growing in murky water, its impurity is untouched. It also represents the purity of heart and mind. The Lotus or water lily is an aquatic plant of Nymphaea with broad green floating leaves and bright flowers that grow in shallow waters. These flowers have long stems that contain air vacuoles in them. The lotus flowers have many bright petals in overlapping symmetrical patterns.

The root plays an essential function in the survival tactics of Lotus. It contains rhizomes that fan out horizontally through the mud below the water. Lotus cherish their tranquil beauty and provide a delightful scenario to look at as their blossoms open on the pond’s surface.

The flower classifies itself in Kingdom Plantae. It is mostly found in a semi-tropical climate like in Indonesia, Malaysia, etc. Lotus is widely cultivated in semi-tropical climates, for example, in places like Australia and European countries, for its aesthetic value and majorly in America’s tropical parts.

Lotus is a perennial herb, preferably grown in shallow, murky water in a warm climate. The flowers remained above the water’s surface while the stems, leaf stalks, and roots remain submerged. The upper surface of the leaves is impervious to water. The Lotus has curative properties in traditional medicine. It is useful in the treatment of infections like smallpox and diarrhea.

The lotus flower connects with the symbolism of Indian philosophy. Lotuses are cherished for their tranquil beauty and provide a delightful scenario to take a look at as their blossom open on the pond’s surface. Lotus is the flower that is the symbol of divinity and beauty and is often used as a simile to describe someone with pure and delicate attributes. 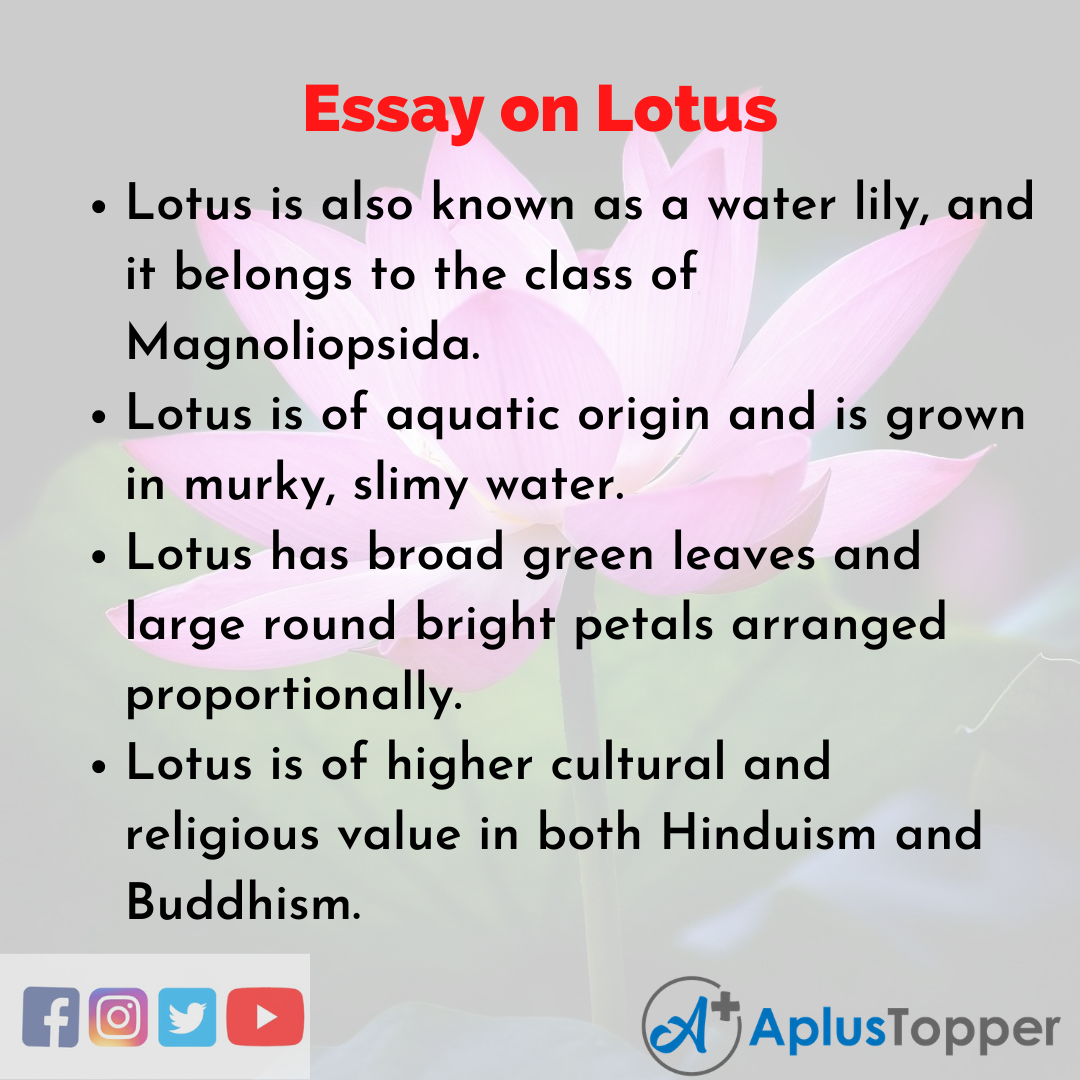 Lotus is considered sacred in both Hinduism and Buddhism. The Lotus symbolizes the reversibility of purity of one’s soul amidst the grime of mortal life.

Lotus has detoxifying properties and helps stop blood flow in injuries. It is suitable for the general wellness of the stomach and reproductive organs. Lotus flower works as a remedy to health problems like throat complications and pigmentation problems in the skin.

The Lotus plants are mostly propagated through seeds initially. The seeds are grown in damp soil and should be exposed to sunlight for at least 6 hours each day initially. The temperature should be around 25 – 30 degrees centigrade should be maintained.

The lotus flower is itself an evocative of this powerful imagery symbolizing this spiritually desired way of life; it grows among mud and murk and remains pristine, and upholds something of intense beauty.

10 Lines on Lotus in English 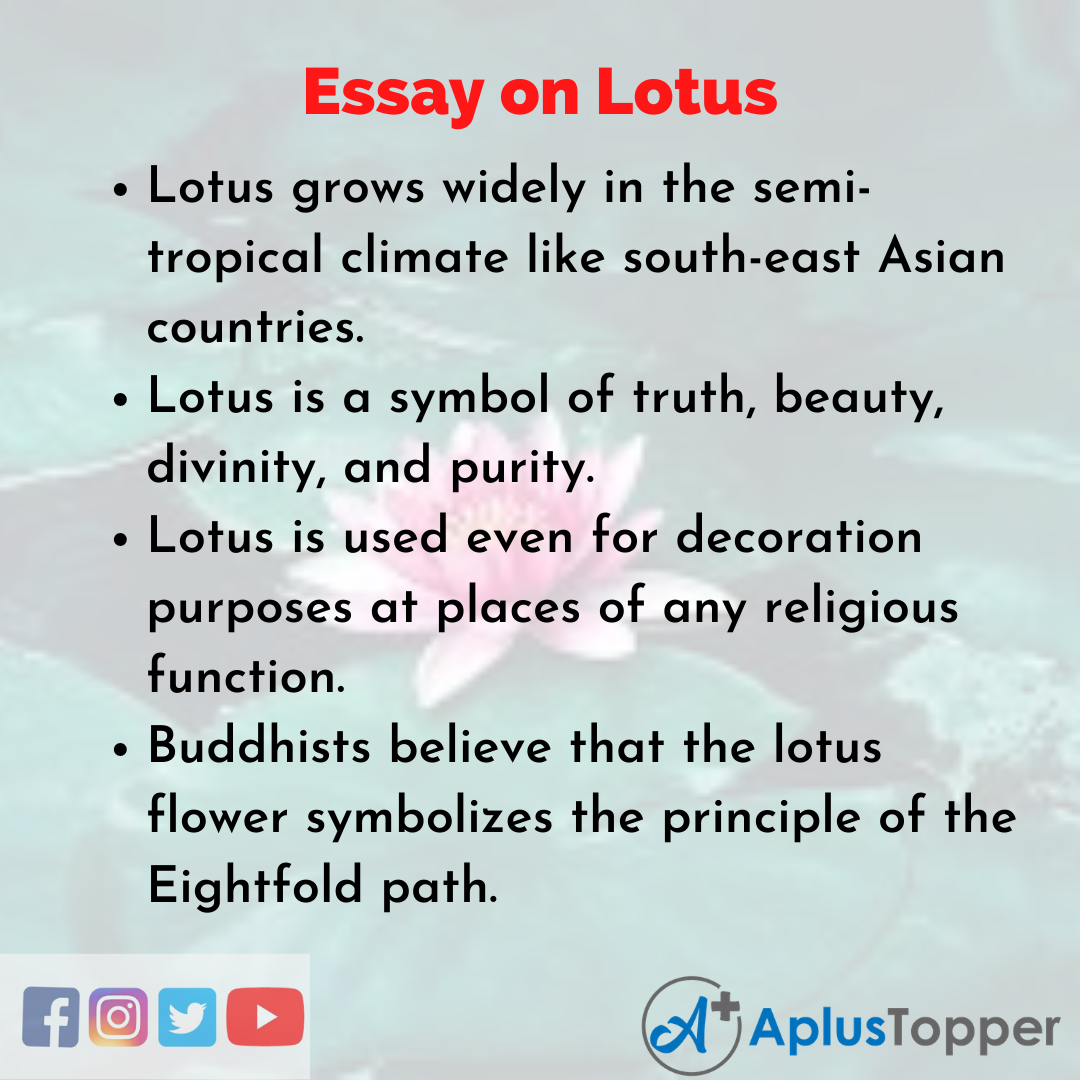 Question 1.
What does the Lotus flower symbolize?

Answer:
Lotus is a symbol of truth, beauty, divinity, and purity. It is of higher religious and cultural value.

Question 2.
Where is Lotus generally found?

Answer:
Lotus is of aquatic origin and is grown in murky, slimy water. It is cultivated widely in a semi-tropical climate like south-east Asian countries.

Question 3.
What is the importance of the Lotus flower?

Answer:
Lotus is the National flower of India. Lotus is used for decoration purposes and has several medicinal properties, and is used to treat kidney and spleen problems. It also symbolizes the principle of the Eightfold path.

Question 4.
Why is the Lotus flower cultivated?

Answer:
Lotus has curative properties in traditional medicine. The leaf is useful for wrapping other food items, and it helps preserve their freshness. Lotus cultivation is also majorly done for its aesthetic value.