Essay on Kanpur: Kanpur is a city which is famous for its inventions and other discoveries. This city is considered in fifth place when it comes to the biggest cities in India. It is also considered the industrial centre of India. It is situated at 80km from Lucknow and 44km distance from Delhi. This is the main reason for it being the industrial capital.

This city is also known for its industries, such as rayon, leather, cotton, and metal. There are various shopping centres, huge malls, and shops that make it an excellent place to visit. Different tourist spots are located all over the city. Also, several institutions, colleges, and schools are available in Lucknow that helps different students build their futures.

We are providing students with essay samples on a long essay of 500 words and a short essay of 150 words on the topic Bangalore for reference.

One of the most important industrial centres present throughout Uttar Pradesh is the city of Kanpur. It is known to be the biggest city across Uttar Pradesh. The population of Kanpur is more than 3.5 million. It is located near the banks of Ganga. It is prevalent for the manufacturing of textile and leather goods of premium quality. It is currently considered one of the leading industrial towns comprising wool, aviation, leather companies, fluor, vegetable oils, cotton, sugar refineries, oil mills, and so on. It is also referred to as the state’s commercial capital.

The development of Kanpur from a mere village occurred when the British took over this place in 1801. They turned Kanpur into a frontier station. It was considered a focal point throughout the early phases of the Indian Mutiny. Several European women and British troops were killed by the Indian troops guided by Nana Sahib. There was a well where these bodies were thrown into, although it was suspected that few of the victims were still breathing. Not long after, the British took over Kanpur again and followed strict rules to punish the massacre’s ones.

In terms of population, Kanpur holds second place in Uttar Pradesh. The urban agglomeration of Kanpur is considered to be the highest throughout the country. It is a vital rail hub and road and consists of an airport dedicated to domestic flights.

It is known to be a popular industrial and commercial centre, specially recognized for its leather industry, which comprises some of the world’s biggest tanneries. The northwest part of the city comprises its central part; most of its industries are situated somewhere along the northwest direction.

There are three kinds of railway colonies in the urban part of the city. Closer to the Armapur suburb, a military field is situated. There are a variety of prestigious universities and colleges comprising of law, medicine, and education. Few of Kanpur’sKanpur’s famous buildings include the Hindu glass temple, Kamla retreat, and so on. It also consists of numerous museums.

The region between the Ganges and Yamuna rivers is a fertile alluvial plain. These rivers water this region. The crops comprise grain sorghum, barley, wheat, and gram. It also includes trees like mango, mahua, groves, and so on. There is a historic area in Kanpur, i.e., Bithur, which is considered a holy or divine place. This region is the home of several small temples created between the 6th to 9th centuries.

Several locations display the beauty and the charms of Kanpur. The Nana Roa Park in this city holds important value across the globe. Since this place had a huge role in the independence war back in 1857. Besides, the zoo present in Kanpur, i.e., Allen Forest Zoo, is also widely popular across Asia.

A few of the most incredible tourist locations in this place are the ISKON temple, blue whale theme, Shri Radhakrishnan temple, etc. It is popularly stated to a divine place where many visits to witness the holiness of the place. 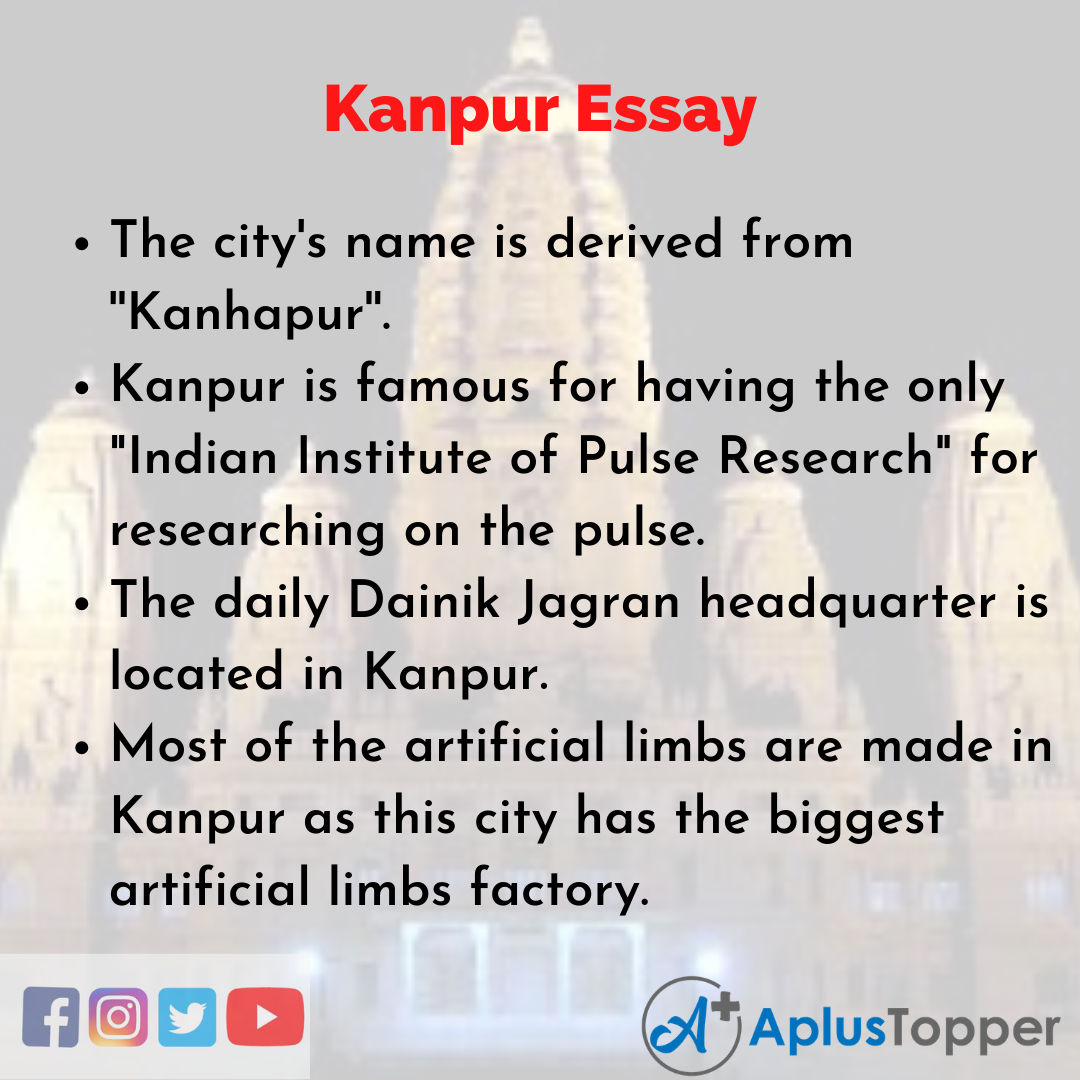 In ancient times people referred to Kanpur as Cawnpore. Besides, in terms of population, Kanpur is considered the 11th one in the list of populated cities.

Kanpur is highly popular for being an industrial city. It is primarily popular for rayon, leather, metal, and many other industries across the world. Kanpur is considered to have some of the best markets based on the buyer’s viewpoint.

These shops usually keep all the latest and premium quality goods. It also comprises of modern styles and fashions that are in trend. These are also decorated in an elegant manner, which never fails to appeal to the customers.

Kanpur is also well-known for the number of prestigious educational institutes. It comprises a variety of institutes for the students to pursue their career goals. It consists of humanities, science, and commerce. Besides, medical college and technological universities are considered to be one of the best across Asia.

10 Lines on Kanpur Essay in English

1. The city’s name is derived from ”Kanhapur”.
2. Kanpur is famous for having the only “Indian Institute of Pulse Research” for researching on the pulse.
3. The daily Dainik Jagran headquarter is located in Kanpur.
4. Most of the artificial limbs are made in Kanpur as this city has the biggest artificial limbs factory.
5. The golf course of 9-hole half is one of the biggest across the state.
6. It has a mixture of religions; it is considered to hold beauty in the city.
7. Allen Forest Zoo is one of the most renowned zoos of Kanpur.
8. This city is well-known for manufacturing premium quality leather.
9. The vehicle can be registered in two different names, i.e. UP77 for rural and UP78 for urban.
10. It is referred to as “Manchester of the East” due to the abundance of leather and cotton products. 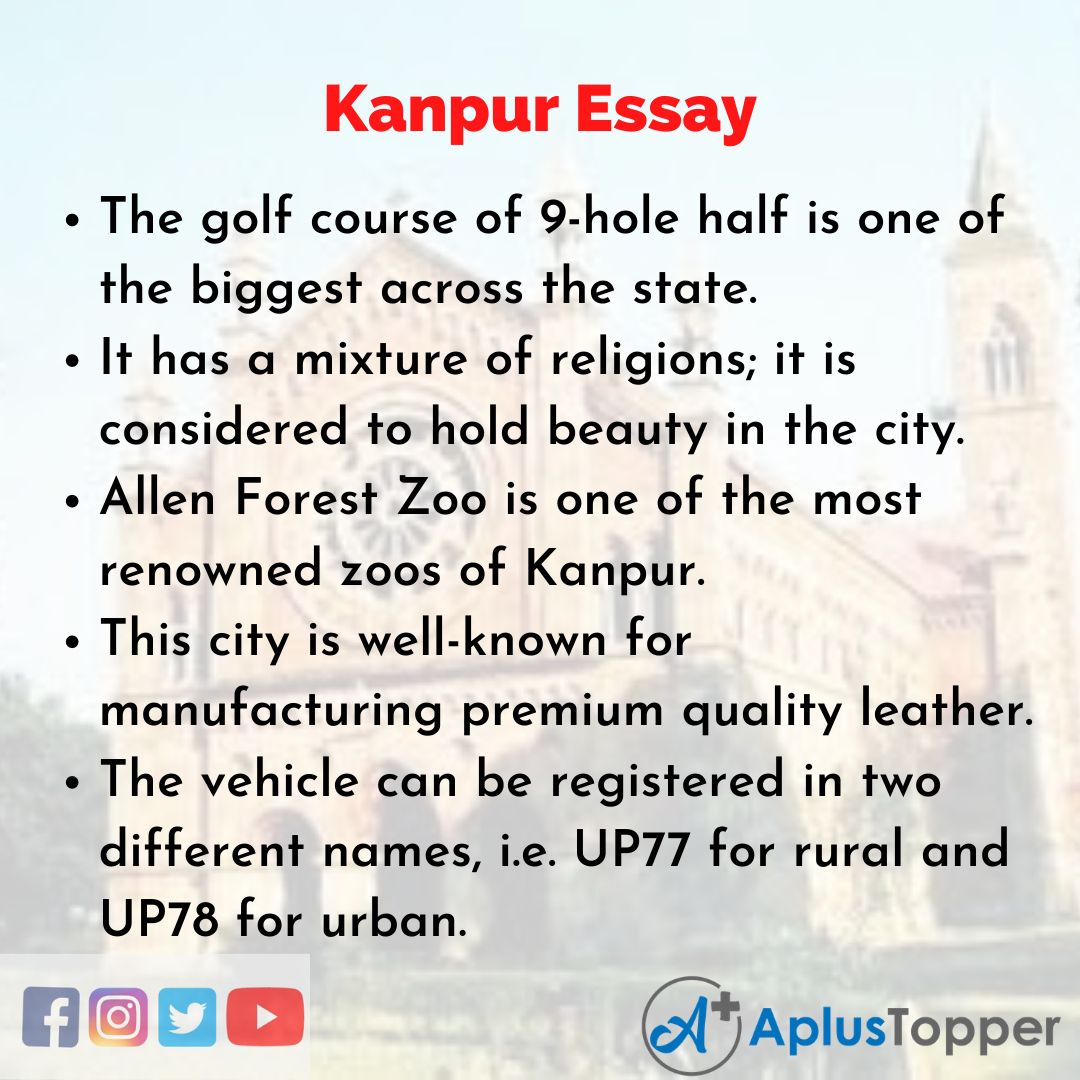 Question 1.
What are the things that are popular regarding Kanpur?

Answer:
It is well-known for the number of prestigious industries and textiles present here.

Question 2.
When is it suitable to travel to Kanpur?

Answer:
You can travel to Kanpur between October to March.

Question 3.
Which places are highly popular in Kanpur?

Question 4.
What are the mouth-watering food available in Kanpur?