Essay on Jodhpur: Jodhpur is the second-largest city in the largest state of India, Rajasthan. It is also the second metropolitan city of the state. It is known for being one of the most popular tourist destinations of all time. It houses several heritage sites and is also home to some wonderful architectural marvels.

The city is called the “blue city.” It is a well-planned city with some stalwart educational and technological institutes like the Indian Space Research Organisation, Defence Research and Development Organisation and many more. Historically, Jodhpur was a princely state, and it was also the capital of the Kingdom of Marwar in Rajasthan.

We are providing students with essay samples on a long essay of 500 words and a short essay of 150 words on the topic Jodhpur.

Jodhpur is the second-largest city in the state of Rajasthan. It is often termed as the “blue city.” It is one of the most popular tourist destinations for its history, heritage and beautiful architectural marvels.

Thar desert, the largest desert of India, is situated here. The city surrounds the historical Mehrangarh Fort. Jodhpur city was a princely state and was also the capital of the Kingdom of Malawar in Rajasthan.

Even before the arrival of the Rajputs, Abhiras were the inhabitants of Jodhpur. The city was founded in 1459 by Rao Jodha, a Rajput chief who belonged to the Rathore clan.

Mughal Period- After the death of Chandrasen Rathore, the kingdom was annexed by the Mughal emperor Akbar. However, soon after Aurangzeb died in 1707, the city witnessed Maratha intervention.
British Period: About 50 years later of the Maratha intervention, the Marawars came into a subsidiary alliance with the British. During the colonial rule, Jodhpur was the largest land of any Rajputana, and the merchants of Marawars, called Marwaris kept flourishing.
After Independence- India attained independence in 1947. During independence, the ruler of Jodhpur was Hanwant Singh. He was initially reluctant to join the Indian union and instead wanted to carry on his autonomous rule over the state. However, after some persuasion by Sardar Valabbhai Patel, the then Home minister if India, the Jodhpur State joined the union as the second largest city of Rajasthan.

Location: The city is just 250 kilometres from the Pakistan borders and therefore, it is a very crucial military base for India. It is strategically placed closer to the borders with well-connectivity to the capital city Delhi. The airports of Jodhpur played an instrumental role in the Indo-Pak wars of 1965 and 1971.

Culture Of Jodhpur: The city has a thick Rajput heritage, and it is often termed as “Jodhana” by the local inhabitants. It is situated on the onshore of the largest dessert in India, Thar dessert.

Motion Pictures: The picturesque beauty of Jodhpur is appreciated by well-known filmmakers who take the historical city as backgrounds for their films and other creations. Wes Anderson’s “Darjeeling Limited” which was a tribute to the Indian filmmaker Satyajit Ray, was shot in the Jodhpur City. The notable Batman movie called “The Dark Knight Rises” also had scenes shot in this city. Moreover, Bollywood films very frequently chose this city for their films, advertisements, web series and other shootings. 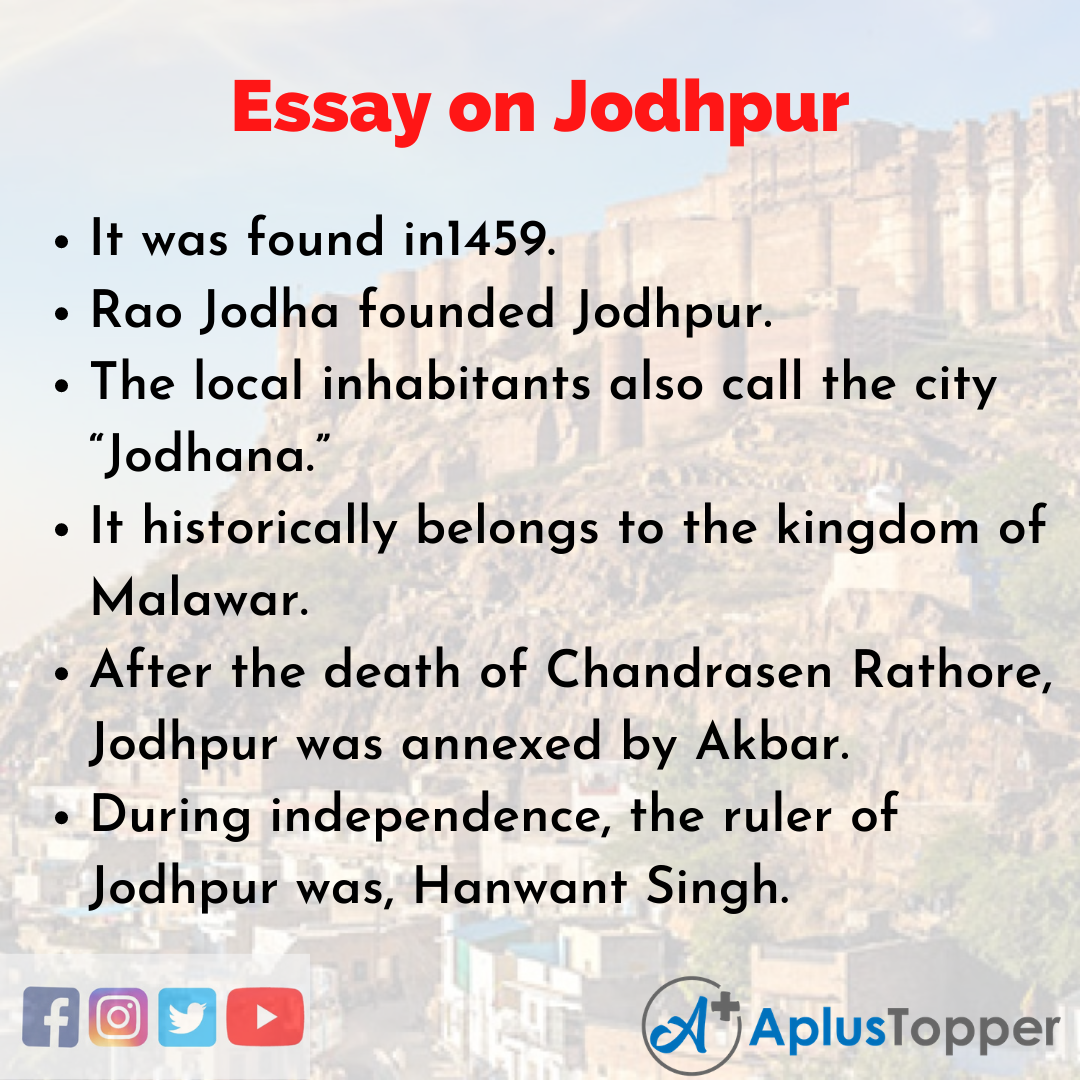 Jodhpur city is popularly known as the “blue city.” It is situated in the state of Rajasthan, the largest state of India. Jodhpur city is the second-largest city of the state. It is located 250 kilometres from the Pakistan birders and is a very strong military base of India.

Jodhpur is also located on the onshore of the Thar desert. It is a city of great historical and archaeological importance. The most notable monument is the Mehrgarh fort. There several beautiful architectural as well as natural marvels that have turned this city into one of the most notable tourist destinations of the country.

It was founded in the year 1459 by Rao Jodha, a Rajput of the Rathore family.

The city of Jodhpur historically belonged to the Kingdom of Malawar. After independence, the princely state formed a union with the state of Rajasthan. The city is known for some popular educational as well as research institutes of the country.

10 Lines on Jodhpur Essay in English

1. It was found in1459.
2. Rao Jodha founded Jodhpur.
3. The local inhabitants also call the city “Jodhana.”
4. It historically belongs to the kingdom of Malawar.
5. After the death of Chandrasen Rathore, Jodhpur was annexed by Akbar.
6. It was an integral part of the Mughal empire until the death of Aurangzeb in 1707.
7. Jodhpur was a princely state which was in a subsidiary alliance with the British.
8. During independence, the ruler of Jodhpur was, Hanwant Singh.
9. The Marwaris are the merchant class of Jodhpur.
10. During British rule, the city was the second-largest land in the Rajputana. 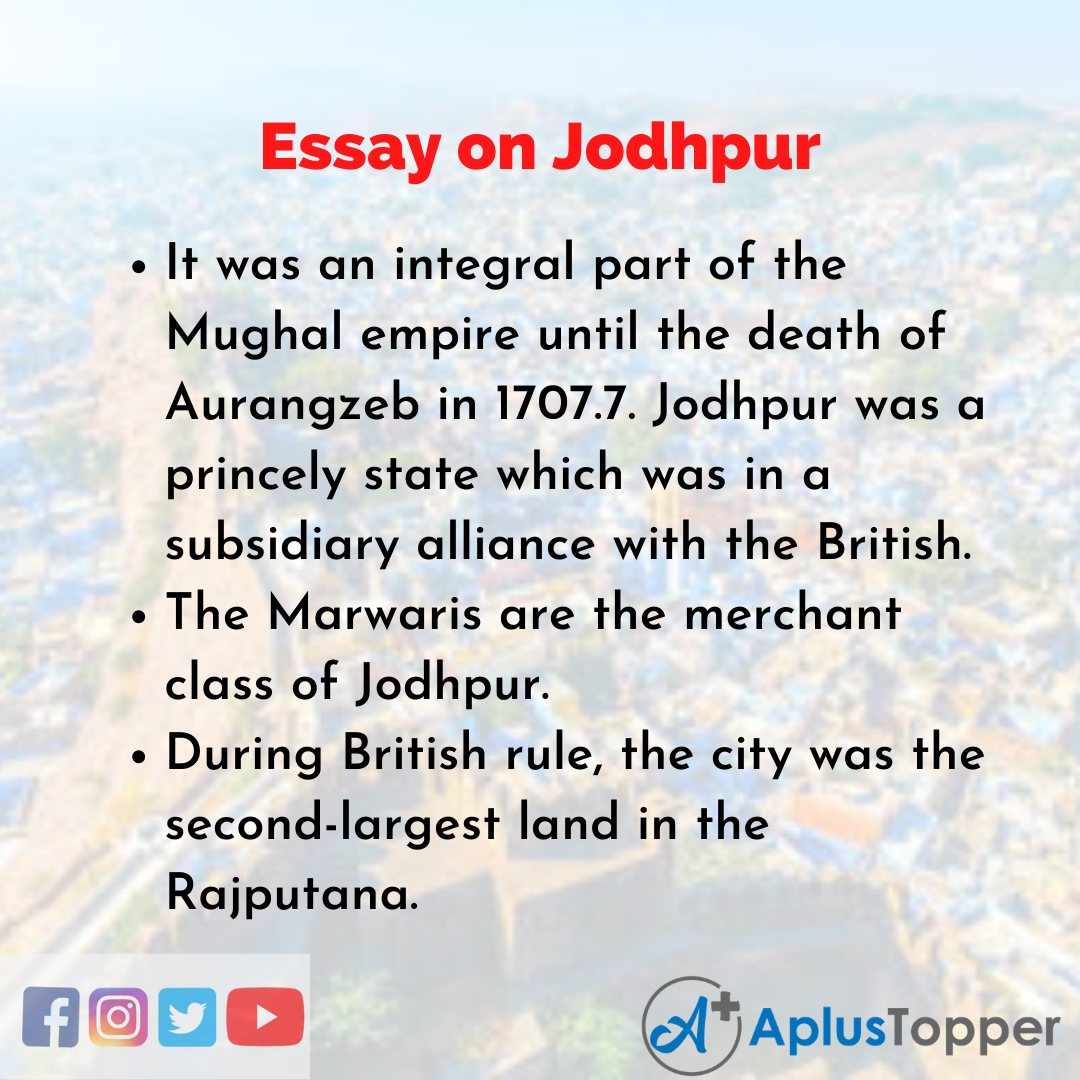 Answer:
The city is called “blue city” because of its uniform coloured houses in the oldest district. All are painted in shades of light blue.

Question 2.
Why is Jodhpur called the “sun city”?

Answer:
It is called the sun city because the weather almost always remains clear and sunny throughout the year.

Question 3.
What is the name given to it by the residents?

Answer:
They call it “Jodhana.”

Question 4.
Who founded the city?

Answer:
Rao Jodha of the Rathore Family founded it.