Essay on ISRO: The Indian Space Research Organisation is the national space agency of India. It was founded in 1969 to develop an Indian space program. ISRO operates through a countrywide network of centres. ISRO is the primary agency that performs tasks related to space-based applications.

ISRO has launched more than 50 satellites of other countries. In India, the manufacturing of satellites their development and their launch is done by ISRO. Space and planet related researches and their development works are carried out with the help of space-based experiments carried out by ISRO. Dr A.P.J Abdul Kalam had a major role to play in manufacturing Indian satellite launching vehicle during working on many important projects of ISRO.

We are providing essay samples to students on a long essay of 500 words and a short essay of 150 words on the topic Essay On ISRO for reference.

ISRO is the space agency under the Department of Space Government of India. It has its headquarters situated in Bengaluru, Karnataka. The space research activities are initiated and guided by Dr Vikram Sarabhai, the founder of the Indian space program in 1962. ISRO was formed in 1969, holding the vision to develop and harness space technology in national development, during the process of pursuing the planetary exploration and space science research.

ISRO had replaced its predecessor the Indian National Committee for Space Research that was established in the year 1962 by the first prime minister of India. ISRO has gained a place among the elite space agencies in the world. The first Indian satellite that was built by ISRO was Aryabhata and was launched on April 19th 1975 with the helping hand of the Soviet Union.

1980 was an important year because it marked the launch of Rohini, the first satellite that was successfully placed in the orbit by SLV-3. In the year 2014 on January, ISRO used an indigenously built cryogenic engine for GSLV-D5 which was the launch of GSAT-14 satellite that made it one of the only six countries to develop a cryogenic technology.

Throughout many years ISRO has tried to incorporate space to the service of the common man as well as the nation. ISRO maintains one of the largest fleets of communication satellites and remote sensing satellites that fulfil the ongoing demand for fast and reliable communication and earth observation. ISRO also takes the responsibility of delivering application specific satellite products and tools to the nation.

ISRO has developed two rockets the Polar Satellite Launch Vehicle (PSLV), which was for launching satellites into polar orbits and the Geosynchronous Satellite Launch Vehicle (GSLV) for placing satellites into geostationary orbits. ISRO had sent a lunar orbiter the Chandrayaan-1 on October 22nd 2008 which made a discovery of lunar water in th4e form of ice. It had also sent the Mars Orbiter Mission on November 5th 2013, which entered the mars orbit on September 24th 2014, which had made India the first nation to succeed on its attempt to Mars.

ISRO also contributed to developing the Indian National Satellite (INSAT) program for development applications. ISRO ranks 5th in the entire world among space agencies with a budget of 1.5 billion dollars. ISRO has come a long way since its inception 50 years ago and still has a long way to go and do wonders. 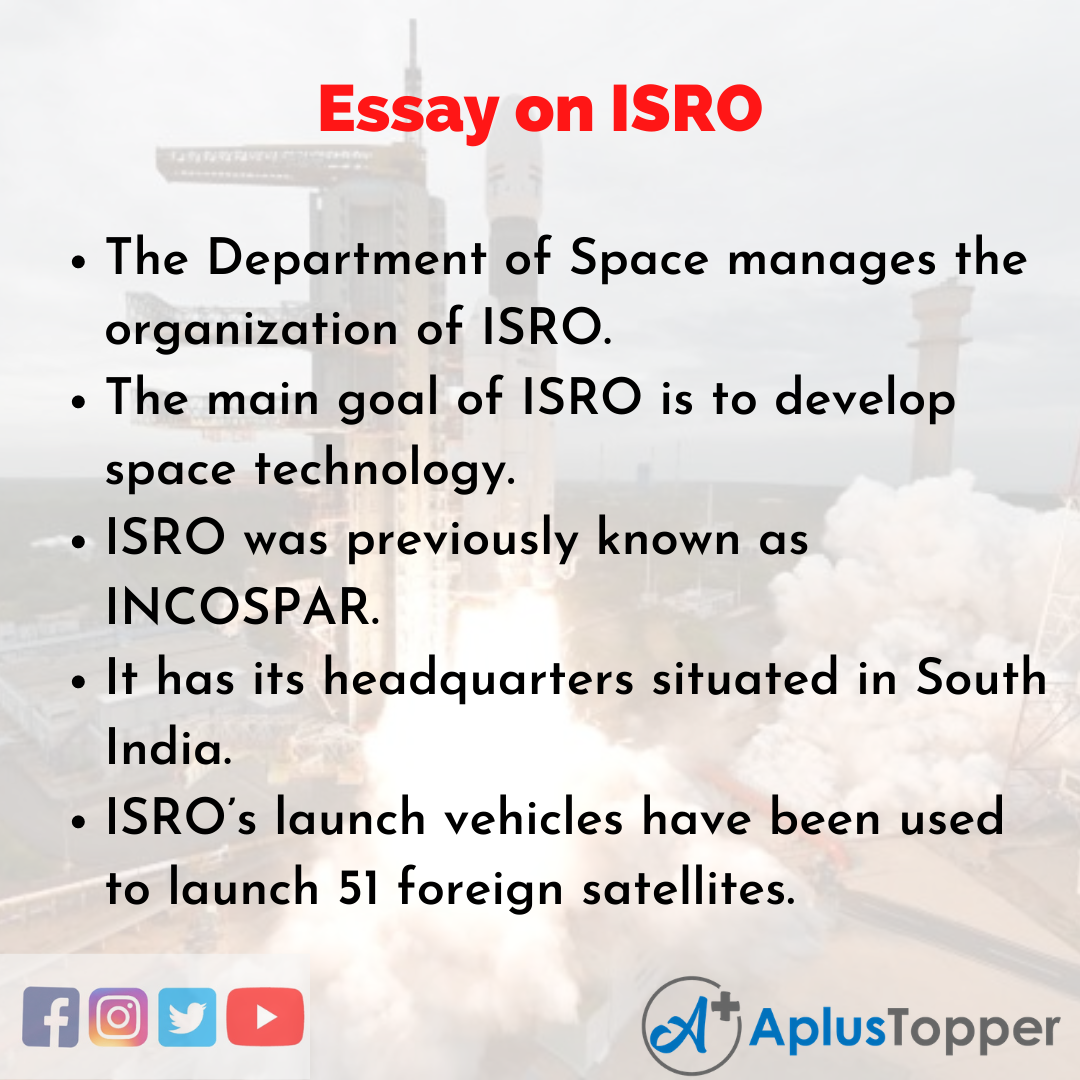 ISRO is a space agency of the Indian Government. It has its headquarters situated in the city of Bangalore in Karnataka. ISRO was established in the year 1962 by our former Prime Minister Jawaharlal Nehru. The famous scientist Vikram Sarabhai was his assistant. He was the first chairman of ISRO. He was called the father of Indian Space Programme.

The main aim of ISRO was to develop Space Technology to benefit the nation for various national tasks. ISRO has successfully completed 75 spacecraft missions. 46 Launch Missions have been successfully by ISRO. SLV was the first Indian made vehicle that launched the satellite Rohin.

10 Lines on ISRO Essay in English

1. The Department of Space manages the organization of ISRO.
2. The main goal of ISRO is to develop space technology.
3. ISRO was previously known as INCOSPAR.
4. It has its headquarters situated in South India.
5. ISRO’s launch vehicles have been used to launch 51 foreign satellites.
6. Twenty-eight satellites of ISRO have been similarly launched by foreign launch vehicles.
7. ISRO has applied its technology for the benefits of humanity in telemedicine.
8. The SLV launched by ISRO was intended to reach a low earth orbit of 500km.
9. ISRO only had two out of four of its test flights successful.
10. ASLV was a 5-stage solid-propellant rocket launched by ISRO. 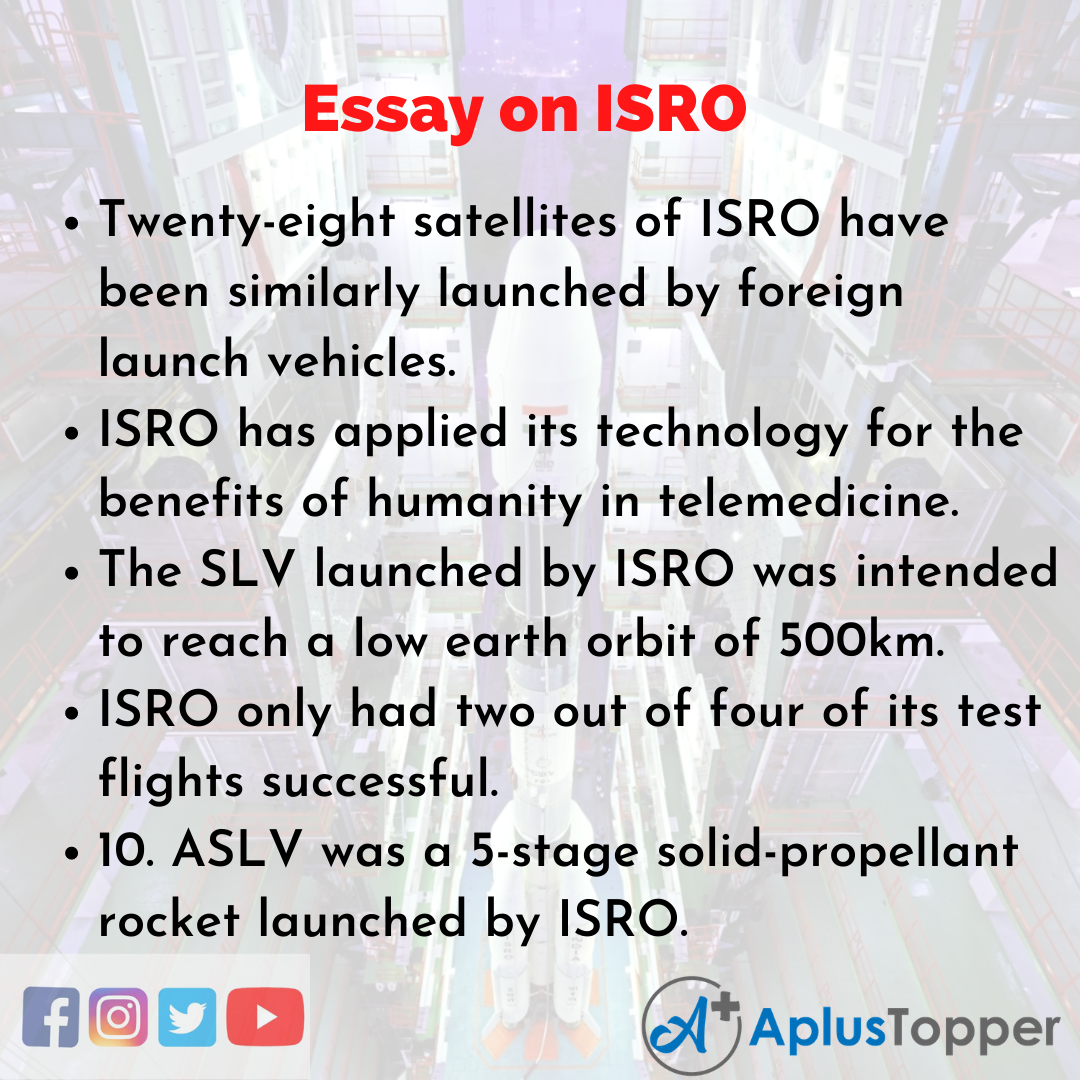 Question 1.
How many centres are there in ISRO?

Answer:
There are six centres and several other units, agencies and facilities spread across the entire country.

Question 2.
Which was the first launch vehicle of India?

Question 3.
What is ISRO’s main objective?

Answer:
The prime objective of ISRO is to develop space technology and to cater to the needs of various national needs.

Question 4.
How many satellites are launched by ISRO?