Essay on Ishwar Chandra Vidyasagar: Ishwar Chandra Vidyasagar who is also known as Ishwar Chandra Bandyopadhyay, was an Indian educator and social reformer. He did an excellent job in simplifying and modernizing some Bengali prose. He also contributed in rationalizing the Bengali alphabet and type which was not changed since Charles Wilkins and Panchanan Karmakar were involved in cutting the first Bengali type. Because of this contribution throughout his life, he is considered as the “Father of Bengali Prose”.  He was also a campaigner for Hindu remarriage, for which he also filed a petition in the court. Here are some essays on Ishwar Chandra Vidyasagar of varying word length which might help you in exams:

We provide children and students with essay samples on a long essay of 500 words and a short essay of 150 words on the topic “Ishwar Chandra Vidyasagar” for reference. 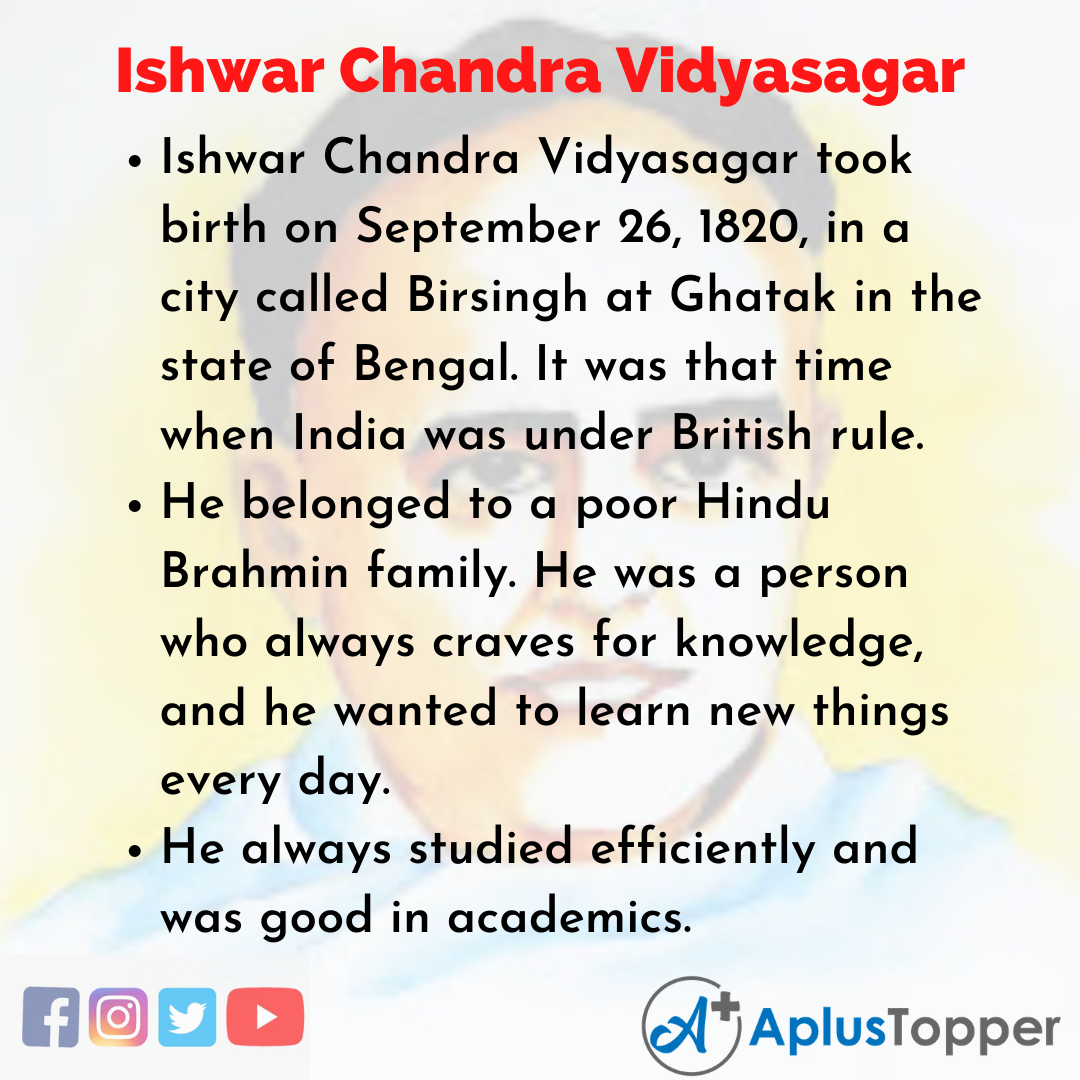 Ishwar Chandra Vidyasagar took birth on September 26, 1820, in a city called Birsingh at Ghatak in the state of Bengal. It was that time when India was under British rule. He belonged to a poor Hindu Brahmin family. He was a person who always craves for knowledge, and he wanted to learn new things every day. He always studied efficiently and was good in academics. As he was a good student, he got several scholarships that helped him to study further. He used to read different other books other than his course books so that he can gain more knowledge of various things.

He continued his studies in a Sanskrit college that helped him to learn Sanskrit grammar, literature and bidding. Because of his knowledge of Sanskrit, he was appointed as a chief in Fort William College’s Sanskrit department at the age of 21. After working there for some year, he then joined a government Sanskrit College as assistant secretary.

Ishwar Chandra was acknowledged for his knowledge and was awarded the title of Vidyasagar, which means Sea of Knowledge. He believes that education is the power that one needs to survive in this world, and he was the living example of this. He also supported girl child education and inaugurated schools in different areas so that girls can enhance their education and stand along with men. Ishwar Chandra Vidyasagar was always enthusiastic about learning new things. The thirst of knowledge motivates him to read more and more so that he can enhance his knowledge to higher levels. He also wanted to share his knowledge with others which is why he started writing about his thoughts. He didn’t fail as a writer and was quite popular among many readers. He wrote some books that inspired people all over the world. He was appreciated for his writings in every corner.

Betal Panchabindati was one of his special and popular books. This book contains stories of legends who belong to the Indian background. It was first published in Sanskrit. He also wrote different books on widows and how they are treated in the country. He tried to give a detailed overview of the Hindu customs.

“Education should not only mean learning, reading, writing and arithmetic, it should provide broad knowledge, education in geography, geometry, literature, natural philosophy, ethical philosophy, physiology, political economy etc. is very important. We want teachers who know both Bengali and English, as well as free from religious prejudices.” The books and quotes were written by Ishwar Chandra not only interest people of their era but are still popular among youth to this day.

Ishwar Chandra Vidyasagar is considered as a Bengali polymath. He was popular among people because of many reforms in the society. He was against many norms which were accepted in India and challenged them so that Indian citizens can live a more comfortable life. Some of the norms that he challenged are:

At that time, widows were suffering a lot in Indian society because of the norms. Vidyasagar was totally against these norms and didn’t like it. Widows were forced to shave their heads, wear white sarees and serve their husband’s family till death. During that time, there were many widows because the elderly were used to marry teen girls at that time.

To escape from all this hardship, many widows try to run away from their husband’s home and live a free life. Many turn into prostitutes to earn a living, but they were degraded by society. So in both ways, they were unhappy and disgusted by other people.

Vidyasagar’s aim was to change the thinking of Indian people and prevent the widows from all these hardships. He was responsible for starting many reforms in order to give freedom and respect to the widows of the society. He claimed that every widow should get treated like other people and have equal rights so that they can’t get degraded by society.

Many people stand against him, claiming that he is violating Hindu traditions and customs, but he also got the support of many influential people like Akshay Kumar Dutta. This gave him the strength to fight further against society.

Vidyasagar has the sole purpose of increasing the social status of women in India. This was the reason he established nearly 35 schools promoting girl child education. He explained to people why a girl needs to be educated and urge them to send their daughters to the school so that they can be independent.

Ishwar Chandra Vidyasagar didn’t only work for widows and women of India but has also contributed his work towards developing the society as a whole. His contributions to society are commendable. 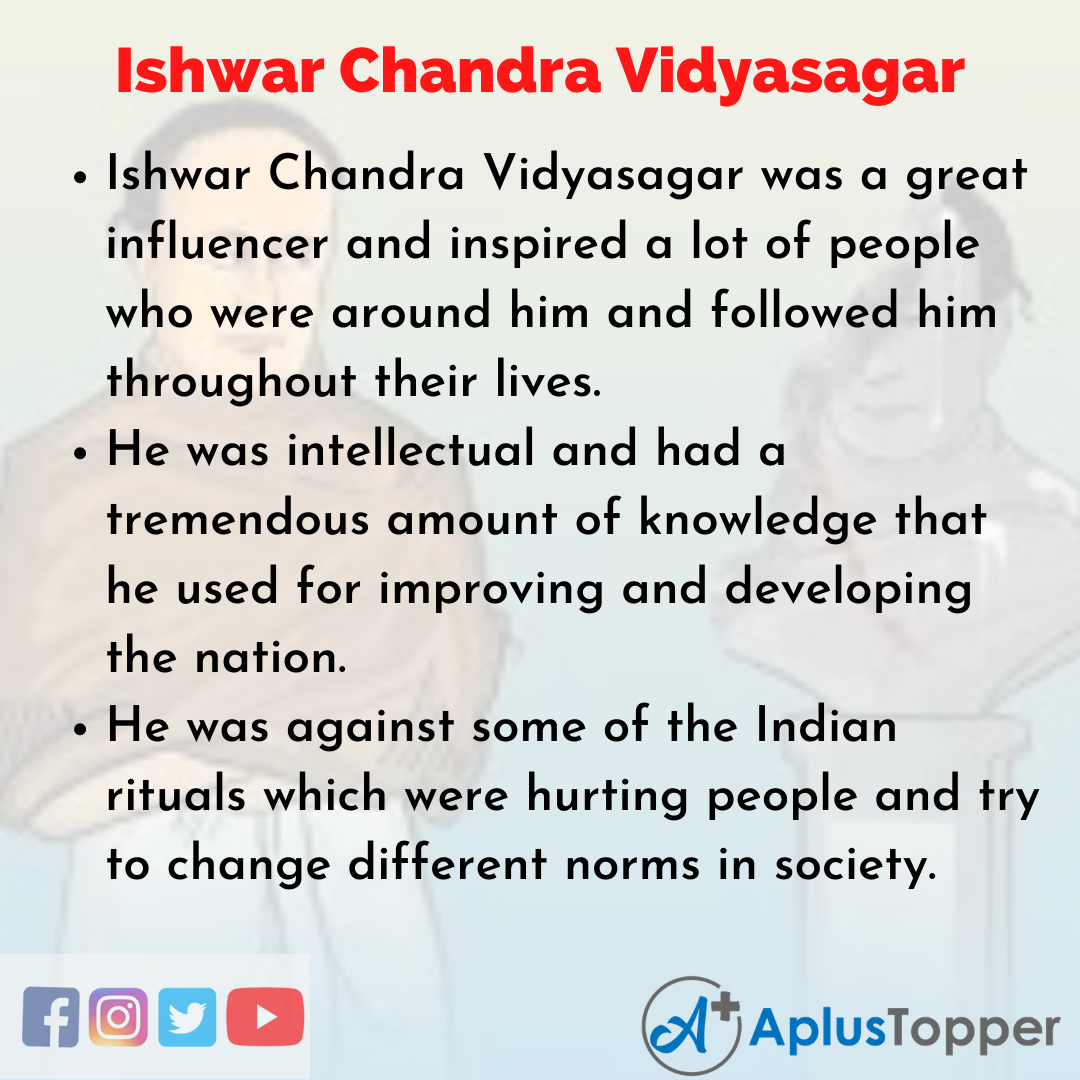 Long Essay on Ishwar Chandra Vidyasagar is usually given to classes 7, 8, 9, and 10.

Ishwar Chandra Vidyasagar was a great influencer and inspired a lot of people who were around him and followed him throughout their lives. He was intellectual and had a tremendous amount of knowledge that he used for improving and developing the nation. He was against some of the Indian rituals which were hurting people and try to change different norms in society. The criticism he got for standing against Indian rituals never affected him, and he continues to do his job.

Ishwar Chandra Vidyasagar belonged to a poor family in Bengal. He was lucky to have parents who knew the importance of education. He was enrolled in a school by his parents. He was so passionate about studies that he used to study under street lamps because his parents were not able to afford a gas lamp for him. Education played a very important role in Ishwar’s life.

He was not studying only to pass the exams but also to gain knowledge about different things that were around him. Due to his financial conditions, he used to work in a place. After working the whole day, he took out time for studies at night.

A Good and Bright Student

Ishwar Chandra Vidyasagar was talented in school days. He was keen to learn new things whereas other students were playing most of their day. He used to read different books most of the time. He studied everything thing passionately with utmost concentration which is why he did well in his exams. He was offered many scholarships because of his performance. He continued to study well with dedication throughout his education career.

He enrolled in a Sanskrit College and learned many things despite limited resources. This shows how passionate and aspiring he was regarding his studies.

Ishwar Chandra Vidyasagar has worked on different important key positions in some prestigious institutions in his professional life. He was appointed as the head of the Sanskrit department at Fort Williams College. After working here for some years, he was then appointed as the assistant secretary in the Government Sanskrit school. During his tenure in this institution, he brought many key changes that helped to improve the students academically.

Ishwar Chandra was a well-educated man which is why he got a good job. With this job, he could have lived a restful and luxurious life without thinking about others. But he chose to develop the society and change the old norms that are troubling many people. The main issue he wanted to rectify was the way women were treated in our society.  He worked hard to give a respectful status to women. He also established many schools in order to promote girl-child education which was then a taboo in India.

There is much to learn from the life of Ishwar Chandra Vidyasagar because he is really inspiring. The way he managed to study and educate himself with limited sources was commendable. The only thing thing that helped him to go through all this hardship is dedication. Along with his studies, he used to work at a place to support his family and also he saved some money for his higher education. With all this, he also managed to work for society and develop it for making it a better place to live in.