Essay On Intolerance: Intolerance is a reluctance to accept, respect, and appreciate any opinions or belief systems relates to an individual or group belonging to another caste, custom, religion, and culture. Intolerance gives rise to crime, hatred towards brethren, and discrimination at a deeper level in the society. Furthermore, it forbids an individual to bear, follow, or go with certain opinions, groups, or people that belong to another caste, creed, culture, religion, or nationality. In a society, Intolerance forms its inception through sex, culture, caste, religion, or other unaccepted beliefs. Thus, Intolerance is an act that gives a person the right to refuse any individual’s mind or heart.

The below-written long Essay on Intolerance applies to students of classes 6,7,8,9, and 10. The essay is written to guide the students during class events or assignments. It also assists the students aspiring for various competitive examinations.

Intolerance is the state of refusal to acknowledge or admire any belief system or ideas of another group, or person’s religion, caste, culture, or traditions. Intolerance leads to the path of destruction of an individual or a society. Mythology and History are, by far, a great example of such an asynchronous act. People can tolerate such actions, but slowly it leads to the feeling of irritation. Some people react to intolerant behavior, practices, or beliefs through fight after a certain point. An intolerant person never listens to other’s ideas on Intolerance and is impotent to make any right decisions.

Intolerance is a transgression, which leads to society, nation, or a country towards escalation. It is an act of failure that influences people to dislike certain beliefs, religion, culture, caste, and traditions belonging to another set or group. An example is in Intolerance between the Israeli Jews and Palestine, which leads to the rise of violence.

Intolerance originates in a society comprising politically charged and economically depressed groups, or individuals who tolerate differentiation, or harm. In such cases, violence, discrimination, dehumanization, or repression of individuals take place. Subsequently, it leads to a situation with permanent separation between two or more groups, caste, religion, cultures, and traditions.

Intolerance is a grave matter of concern in a society, or an action, as it gives rise to violence among people belonging to different communities. This situation leads to a boycott of those communities that are treated differently based on their indifference. For instance, the Muslims boycotted the non-Muslim population and vice versa. Intolerance narrows a person’s mindset. This prevents him/her from accepting any reforms that would help the development of a society or the nation. Intolerant people possess a high level of destructive power and put the entire nation at stake. Therefore, the act of Intolerance should be prevented in any country, community, or society.

We cannot brush off saying that India is free of Intolerance; many countries are great examples of ‘unity in diversity.’ Many developing countries use this motto as their mantra. Intolerance occurs in countries that home people with diverse cultures, traditions, castes, religions, castes, and customs. However, tolerant countries celebrate fairs and festivals without the interference of other groups and communities. Due to religious Intolerance in Indian society, the nation gets divided. This situation makes one cause harm or wage war against his/her neighbor. Intolerance in society arises due to the absence of experiences among individuals and the lack of individual opinions. Generally, the ideas are based on each other’s beliefs, leading to the closet person’s influential ideas.

Compromisation occurs when people promote tolerance through several experiments and disapprove of Intolerance. Interacting with inter-culture or group contacts creates personal experiences and thus reduces Intolerance. Communication is another effective negotiation mechanism that eradicates Intolerance, allowing people to express their interests and needs. Intolerance is perpetuated between individuals, media, and Education. Media plays a crucial role in promoting understanding, tolerance, and anything that is culturally sensitive. In a society. Education is another best way to promote peaceful co-existence and endurance in the nation, culture, or community.

In short, one should live and promote an atmosphere of tolerance and interact with other groups to understand their stand on an issue. 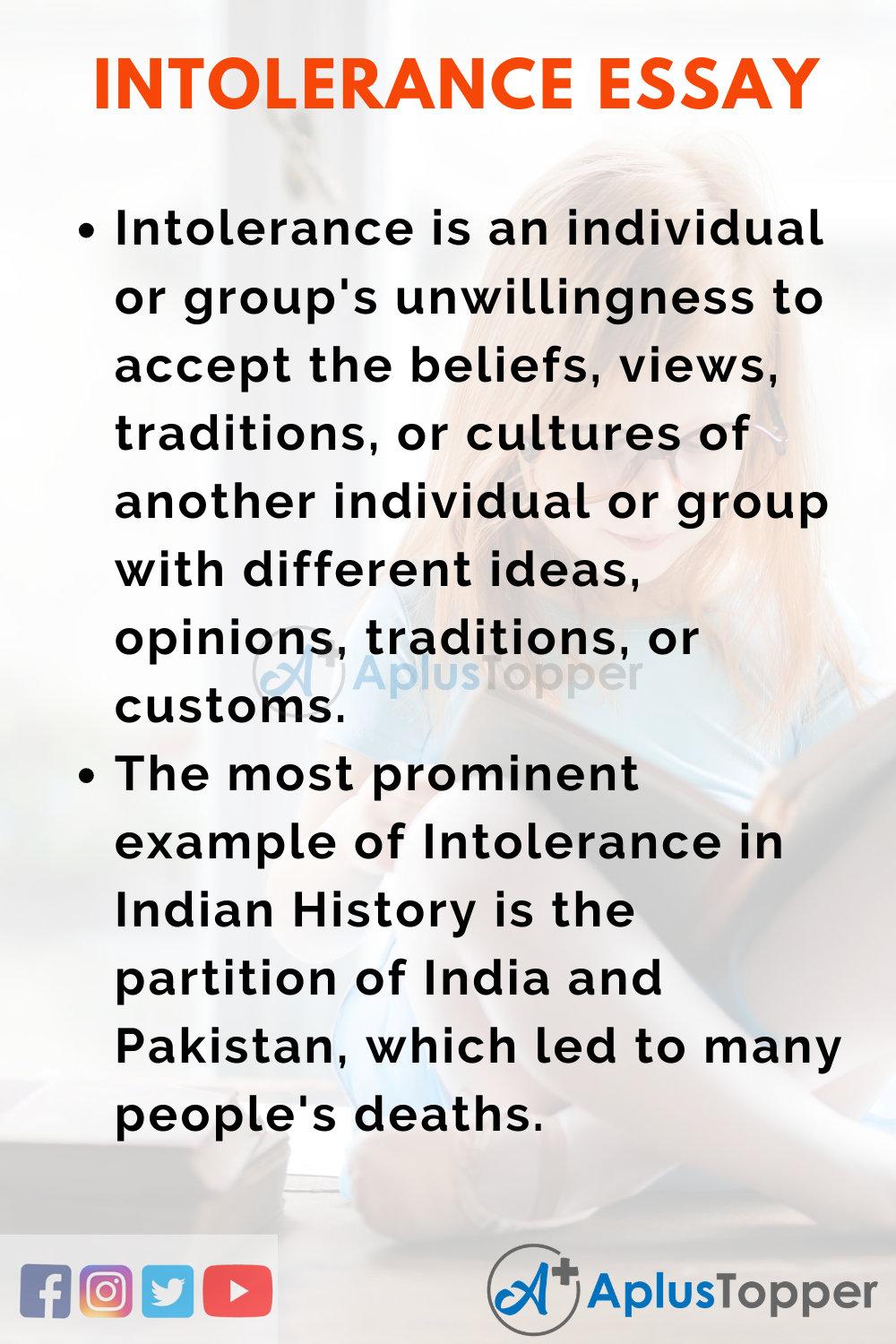 Intolerance is stated, which is does not allow the rise and practice of caste, religion, beliefs, or cultures different from its own. Intolerance, especially religious Intolerance, separates people in a society or community, thus dividing the nation on the whole. The separation creates a gap between the people of the organization with diverse cultures, caste, traditions, religions, and beliefs. Through this unjust Intolerance, a neighbor fights the other.

Intolerance makes people angry and makes them use violence against people of different groups. To stop Intolerance, one needs to promote tolerance, and that action starts with oneself. People, as individuals, should focus and practice the habit of understanding in their everyday lives. This means that one should not make decisions based on assumptions and stereotypes. Education is a vital tool in promoting peace and Intolerance. It should teach students to accept diversity in a community or society. For instance, schools that create a sophisticated atmosphere establishes the act of respect and understanding between children from different groups.

Thus, an individual must remain tolerant and promote peace for the growth and development of an individual, society, or nation.

10 Lines On Intolerance Essay in English 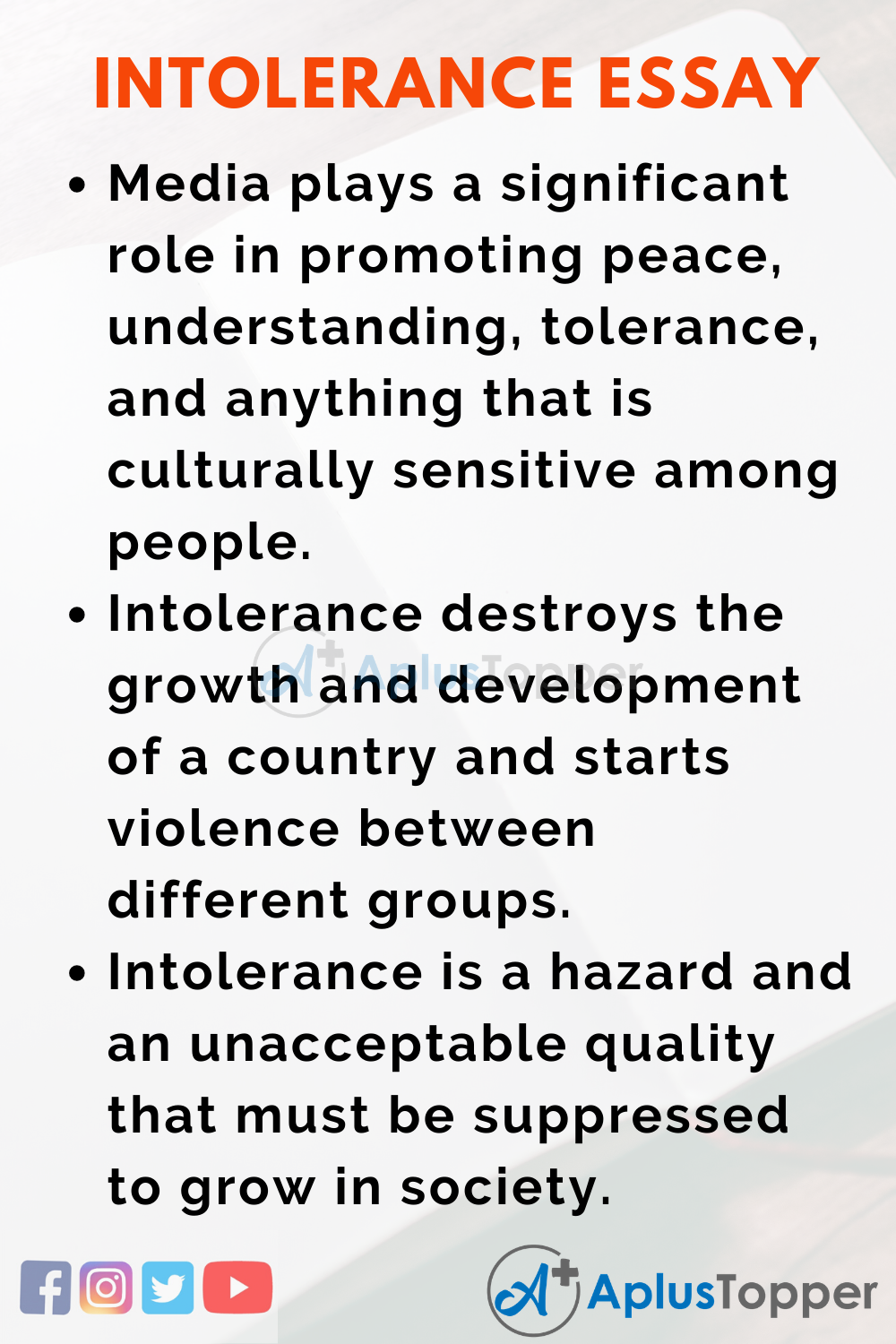 FAQ’s on Essay on Intolerance

Question 1.
What is Intolerance?

Answer:
Intolerance is the state of refusal to acknowledge or admire any belief system or ideas of another group, or person’s religion, caste, culture, or traditions. Intolerance leads to the path of destruction of an individual or a society.

Question 2.
How does Intolerance affect a society?

Answer:
Intolerance in a society creates division and permanent separation of people. It leads to the act of violence among different groups—for example, the Partition of Bengal during the British Rile in India.