Essay on Internet Addiction: The origins of the Internet can be traced back to the 1960s. Over the last 60 years, technology has improved in such strides that it seems virtually unrecognizable today to what it was when it started. No other invention has evolved at a pace as fast as this. The Internet gives us access to the entire world for anything and everything. If one has access to the Internet and enough money, there can be no need for any individual to step out of the house whatsoever. As much as it has connected us to the world, it has also isolated us.

What’s worse is that now there exists a phenomenon of ‘internet addiction.’ Which is an unhealthy addition to a world already struggling with addictions as it is. And just like any other addiction, it has its fair share of negative consequences and problems that can affect a person physically and mentally.

As of recently, internet addiction has become a global problem among people of all ages. Not just the youth but also children. They sit in front of the screen on social media, chatting, or video games. Using the Internet in excess can be destructive for the person and even fatal.

While the Internet is a great tool and can be used to make life easier, it is essential to check how much time we spend. It is harmful when individuals make their whole lives revolve around the Internet.

The Internet is also filled with dangerous people, and it can therefore cause people to get isolated from their family and friends and influence individuals to make wrong decisions. It is crucial to regulate internet usage, and parents and guardians must be careful and aware of their children so that they don’t develop an over-dependence on the Internet.

Internet addiction has become a new age addiction that has gripped people around the world. People belonging to different age groups suffer from this addiction, though it’s more prevalent among the youth. People access the Internet to kill boredom, find a way out of loneliness, or simply to have some fun in their lives. However, before they know it, they are hooked to it.

The Internet is a massive entertainment and engagement source, and it’s hard to resist the addictive things it offers. However, it’s essential to regulate internet use to ensure that it has not become an addiction. Like any other addiction, this one too has grave consequences. It can have a severe impact on a person’s neurological functioning. People can lose their sense of time and bearing and neglect their family, friends, and even their work and responsibilities.

Many internet addicts develop anxiety issues and depression. This hampers their personal and professional growth. Their physical health also deteriorates. They can incur health problems like obesity, heart condition, and hypertension. To live a balanced life, it is essential to be careful of one’s internet usage and to have the self-control not to let it take over your life.

The number of internet users worldwide is increasing drastically, and with every passing day, the number of internet addicts is also rising. The Internet can be a very alluring place. Video games, chat rooms, social media platforms, entertainment videos, engrossing web series, and interesting blogs can keep an individual hooked for hours. People begin to use the Internet to beat loneliness and tedium and end up attached to it within no time.

Around a decade ago, when the Internet could only be accessed on the desktop or a laptop, web usage was limited. Many were still excessively using it, but it was not as bad as it is now. The introduction of smartphones has given the rates of internet addiction a boost. People are seen glued to their screens wherever they go. This becomes worse as work is done on screen as well. And in these times, you need this technology for getting an education as well.

Internet addicts forget to eat, complete essential tasks, and ignore their loved ones. All they need is a high-speed internet connection and a tool to access it. This is more than enough to consume all their attention throughout the day.

Internet addiction is a severe disorder that affects a person’s ability to think rationally. Even though internet addicts often know the harmful consequences of this addiction, they do not make much effort to beat it. This often results in severe problems like depression, anxiety, and other psychological disorders.

The Internet is one of the world’s most important sources of data that is used worldwide. People from across the globe communicate with one another through the Internet. Whether it’s watching a movie or catching up with an old friend, the Internet has made everything easier. It has also made us more productive and has made life so much easier.

It is hard to pinpoint precisely what causes internet addiction. But it is known that it can be easily compared to other types of addictions with the sort of dependency it causes. Internet addiction is a more recent phenomenon, and the causes can vary with gender, age, and personality.

Social circles play a critical role in causing behavioral issues like addiction. Internet addiction is no exception, as constant internet surfing has become commonplace among the youth. There is even an encouragement to seek friends online while playing online games, chat rooms, or just on social media.

The Internet can also become a coping-mechanism for self-soothing and as an escape for those who are suffering from mental health issues and such. The same way that people who suffer from depression or anxiety use alcohol and drugs to self-medicate, the Internet can be a distraction. Be it by playing video games, watching shows, or merely surfing forums.

An addition to the last point is that emotions and thought patterns have a huge role to play when it comes to addictions being developed. Those that desire an evasion from real life or a distraction from problems go to the Internet for emotional support. When an individual finds this sort of support only on the Internet and not in real life, it becomes an addiction. Introverts or are shy and do not have social skills can also develop an internet addiction. They find that it is easier to interact with people online than in person. It is also that easy for people to fabricate their identities and scam people like those who are naïve.

People get addicted due to the dopamine high that internet surfing can give. A person who receives this only from the Internet and nowhere else can very quickly be addicted. All of us need to be careful with our internet usage and dependency. Regulation or completely cutting it off can sometimes be the answer. 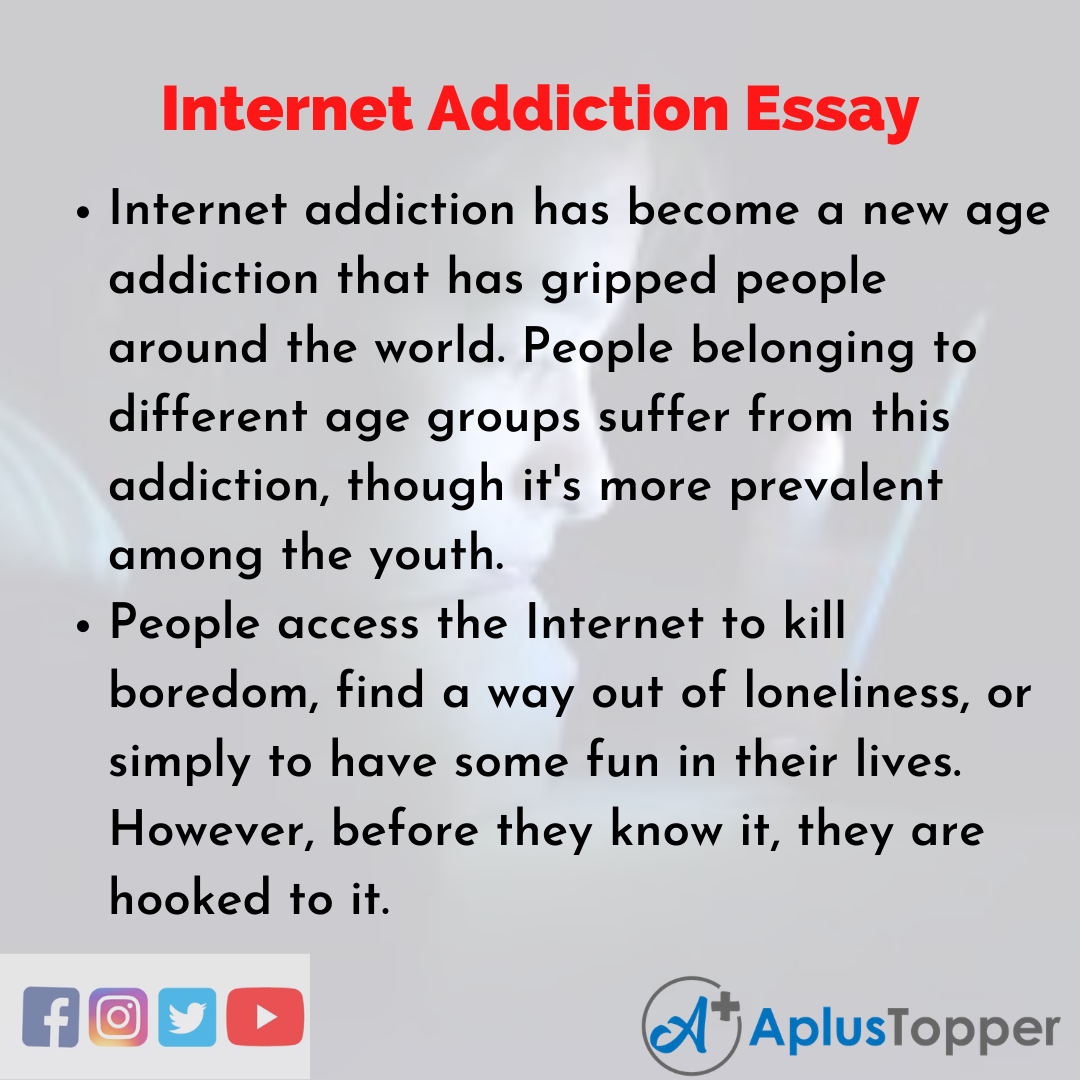 Long Essay on Internet Addiction is usually given to classes 7, 8, 9, and 10.

People around the world are now having the issue of compulsive internet usage. They spend hours and hours on end on the Internet knowing that it does not benefit and is simply a waste of time. They make no effort to change this even though they know that it is harmful and can become an addiction. This lack of self-control can be hazardous, just as any other addiction is. People who are addicted to the internet face mental and physical issues, which can end up being fatal and end a person’s life prematurely.

Internet Addiction and the Youth

Internet addiction is more prevalent among youngsters. They end up scrolling on social media or forums or other websites, watching videos, shows, chatting, or shopping online. Time on the Internet may have begun as very minimal but ends up taking hours and hours of a person’s day as the usage increases. As they grow addicted, other responsibilities at home or studying are neglected. This can affect a person’s education and even inhibit their social growth.

When social skills are not allowed to be built, they do not know how to function in society anymore. They are unable to interact with people in real life normally due to this. They can also develop social anxiety. They prefer friends online who can very easily be dangerous individuals scamming them and negatively influencing them. They can be groomed inappropriately or end up stealing and losing money. When their education is affected, it hampers their future, and they spend no time developing skills that can build their careers. Spending all the time online can cause health issues if they do not exercise or go out.

It is also regrettable that parents hand their children iPads to distract them. From a young age, the children begin to develop a dependency on the Internet. Even while eating, the children gravitate towards the screen to watch something. Another sad development is the fact that now smartphones and laptops are essential for education. Notes, lectures, and all resources can be found online. If all a student’s time studying and relaxing is spent online, there is no time to be present in real life.

In the same manner, many young working professionals also fall prey to the same problem. Their time is wasted on the Internet when they should concentrate on furthering their careers and networking. Internet addiction has an adverse effect on young people today and presents a genuine danger for their future.

Internet addiction can have extremely harmful consequences. It can deteriorate one’s ability to function normally in society and affect them physically and mentally. It can cause various types of disorders and problems. Here are some examples of the same.

Constant use of the Internet reduces the brain’s capacity to grasp and understand new things. It drastically affects one’s attention span. The addicts have a continual desire to get back on the screen and surf regardless of what work is pending. It affects productivity and can cause behavioral issues.

It can also induce mental disorders such as anxiety and depression. An excellent example of this is anxiety caused by doomscrolling. It can also cause paranoia.

As mentioned before, individuals spend more time online than offline, which hampers social skills growth. Individuals no longer know how to interact and function normally in society. And the lack of such skills results in more avoidance, which furthers the problem and does nothing to solve it. It can lead to a feeling of isolation and even depression.

When all of a person’s time is spent on the Internet, and no time is spent walking around and going out, they develop an unhealthy sedentary lifestyle. This can cause obesity and cardiac issues. They can even become overweight, putting them at risk for stroke, diabetes, and such illnesses.

An obvious indication that spending time on the Internet is becoming an addiction is withdrawal symptoms. Individuals begin to feel restless, angry, and irritated when offline. The Internet becomes a crutch that they cannot live without. This causes stress and anxiety, and the emotional outburst caused by not accessing the Internet can be disturbing. It can be harmful to people around as there have been incidents where people had murdered family members when the internet connection was cut off. 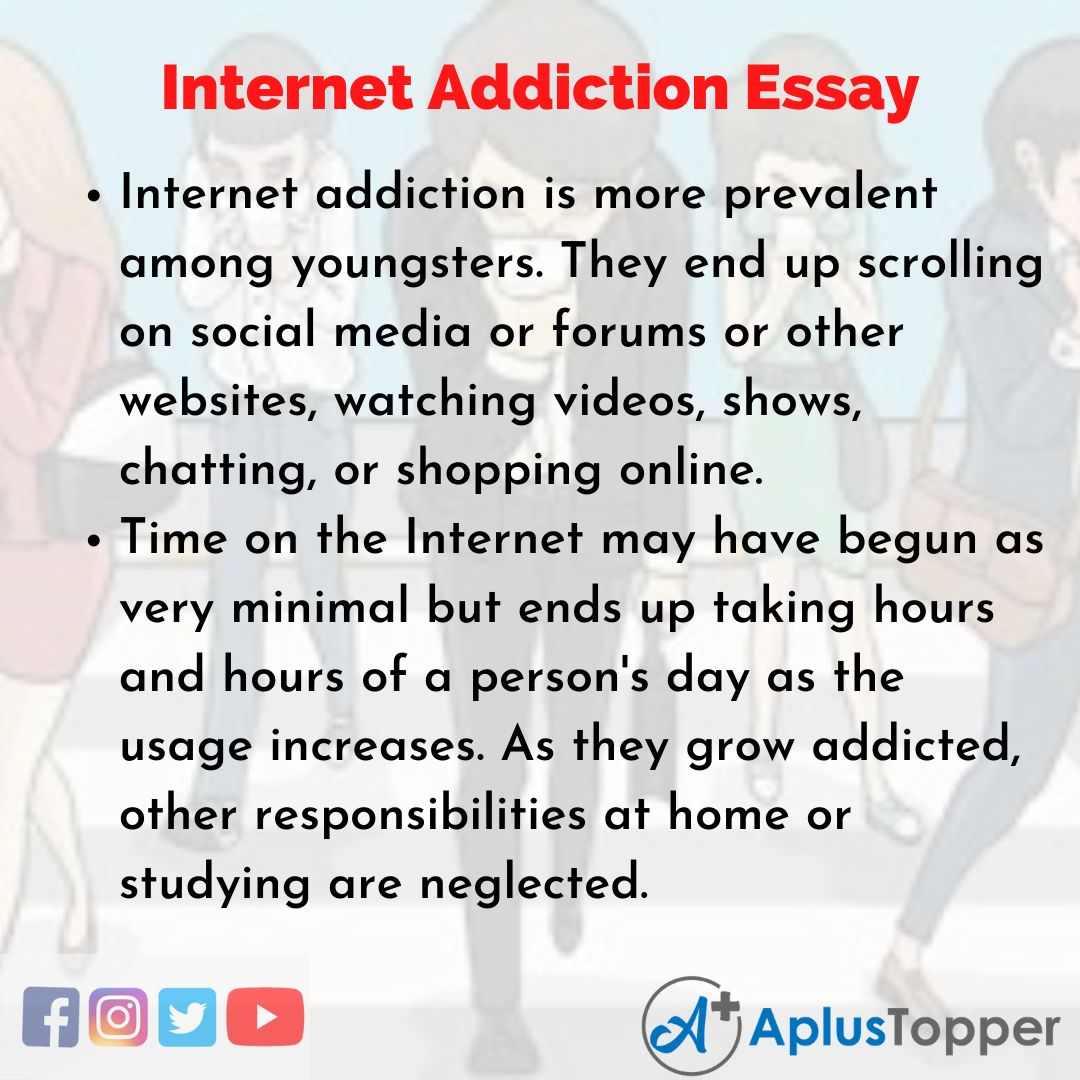 People must be careful not to let internet usage get this bad and get help if it does develop into an addiction. It should not be taken lightly, and we must be careful so that we can lead healthy lives.