Essay on Inter School Competition: Inter-school competitions are held on various topics, throughout the year involving several schools. This is a very healthy thing as a student is assessed, not only within the school, but is compared with the students of all the other schools too. These competitions give the younger generation a boost and raise their confidence while progressively developing a positive attitude towards competitions.

Below we have given a long essay on Inter School Competition of 500 words is helpful for classes 7, 8, 9 and 10 and Competitive Exam Aspirants. This long essay on the topic is suitable for students of class 7 to class 10, and also for competitive exam aspirants.

Two months ago, I had the privilege of taking part in an inter-school extempore competition. First, a screening contest was held in our school. Around twenty students delivered a speech on the topic. “Is the education of women necessary for the upliftment of Indian society? We all had prepared well, but the final result had the names of the best three participants only. My joy knew no bounds, when I saw my name in the list. I had no idea that I would be selected. I had done well, no doubt, but to represent my school in an inter-school competition was a very big responsibility.

The competition was a month away. A month? It was too short a time to prepare on all the topic under the sun, I selected a number of recent topics and started preparing myself earnestly. I wanted to win laurels for my school. It did not mater to me if I did not win, but at the same time, I wanted to earn a good reputation for my school. My father helped me a lot, he would point out weaknesses, and within a month, I was ready to face the contest.

The day of the competition dawned. Oh! It was a very gloomy rainy day. My spirits sagged but my parents encouraged me saying I was sure to get success. I reached the Youth Hostel, where the contest was scheduled to be held. There were many contestants, all waiting with bated breaths, for the competition to commence.

The judges arrived, and the rules of the contest were told. The topic was “Global Warming”. Each student was allowed to speak for seven minutes, after six minutes, a warming bell would be rung. After the warning bell, the student could speak for only one minute, after which he/she would be disqualified. There were fifty students from prestigious schools.

As my turn was approaching, I felt sweet beads breaking out on my forehead. Although I was well prepared, I could not help feeling nervous. My name was called out and I approached the stadium. Before starting. I prayed in my mind, asking God to help me. 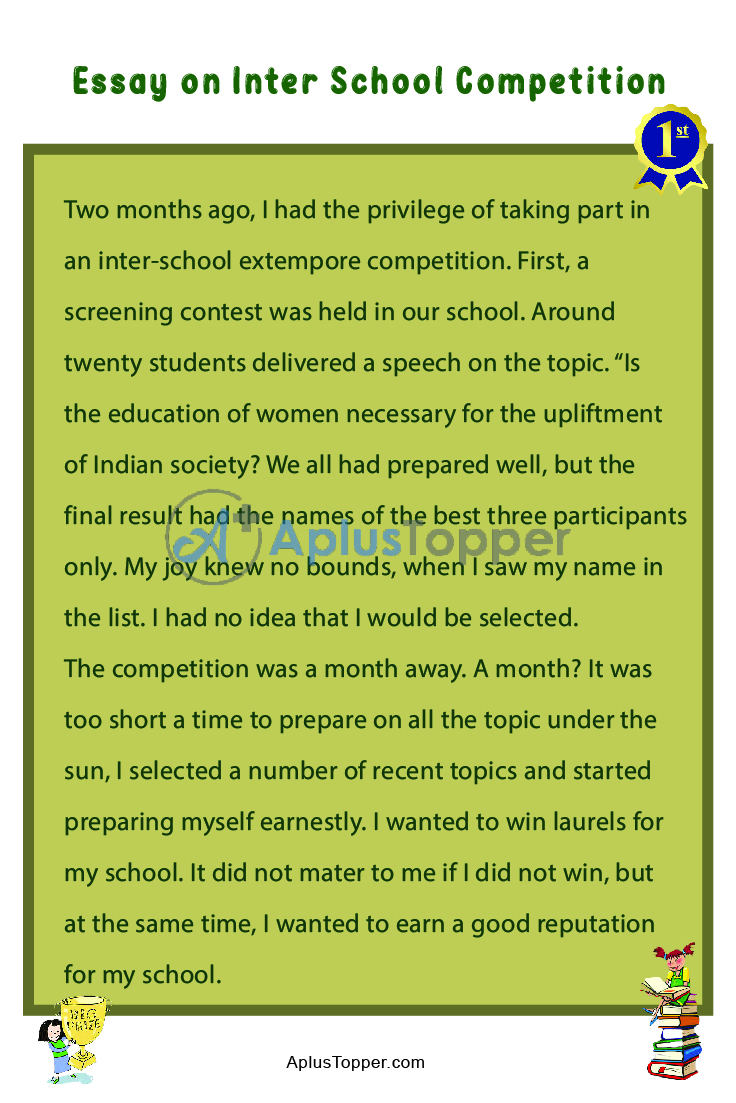 I started speaking and I got so engrossed in my speech, I did not realize how time flew, till I heard the bell. I concluded the topic and came back to my seat. I couldn’t believe that the contest was over. All the other students, spoke veiy well, truly, the cream of the student community was present there. The matter they presented was concise and interesting. I did not think, I stood a chance of winning. It was a very tough competition.

At the end of three hours, the contest came to a close. We waited, in eager anticipation, for the panel of judges to announce the results. It seemed that time had come to a standstill. At last one of the judges came to the dais. As he announced the result, there was loud applause. There were three prizes. Each of the Prize winners was awarded a cash prize along with a certificate. My name led the list of prize winners! I was so overjoyed that tears rolled down my eyes. I received my prize and went home as a proud winner! So overjoyed that tears came to my eyes. Thinking that I had brought honor to the school. I thanked God and felt very humble before his bounty.