Essay on Indore: Indore is very popular for the Malwa Plateau that comprises of rich black soil. The cotton textile of this city has taken up fourth place across the country. This city is also famous for its elegant and beautiful bangles.

Besides, it is famously known as the food city. Indore is well-known for the lassi comprising of the flavours like yogurt. Similarly, in many restaurants in this city, the appetizers such as santrola and Jal-Jira are provided. The area taken up by Indore is around 530 km2.

We are providing students with essay samples on a long essay of 500 words and a short essay of 150 words on the topic Indore for reference.

Indore is one of the largest and beautiful cities present under Madhya Pradesh. This city is widely famous for its delicious food. Besides, it is also well-known for the language that is primarily used by the people of Indore.

It is considered to be a well-developed city that is home to the most famous IIM and IIT. Besides, it is known as the educational hub due to several highly prestigious universities and colleges.

Many students outside of Indore visit to continue their studies further and achieve their career goals. This city is considered to very polite and friendly place to visit or stay in. The people in Indore are known for hospitality and formality.

Indore’s culture is quite similar to that of the other states or cities. It celebrates several festivals with happiness and excitement. The club that has received its name from the Maharaja Yeshwant Rao Holkar II is trendy in Indore, i.e., Yeshwant club. It is located at the Sayaji Hotel in this city.

This club is widely known for adding to the glory of the art and culture of Indore. There are several other art centres located in the city. Besides, many gifted people are born in this city.

Rock and Metal is the soul of the city. One of the most widely recognized brands across the world is the Nicotine band from Indore. There are several exciting and amusing historical locations present in Indore that attract tourists.

Besides, the city is also widely popular for its delicacies, and the food that is demanded amongst the people across the globe is Jalebi and Poha. It is considered to be the usual or common breakfast for the people residing in this city.

There are several famous restaurants and café available in this city that add to its liveliness. The most popular food lane in Indore is known to be the Chappan market. It is normally jammed with people at all times. It is considered that the people in Indore love mouth-watering delicacies.

Indore is also well-known for the availability of different types of Namkeens. This city is famous for the presence of countless kinds of cuisines starting from pani puri, samosas, vadas, Chola bhaturas, and so on. The other dishes include Nihari Gosht, Dal-Bafla, and so on.

It is also highly recognized for its drinks, including the Shikanji – an amusing mixture of dry fruits and milk. These are one of the best parts of Indore that one must experience.

In Indore, people belonging to a variety of cultures, religions, and backgrounds coexist peacefully. This is why it is known to be an incredible city to visit throughout the country. The royalty and the beauty of the city is displayed through its culture. Besides, this city has developed drastically over the years.

Indore is known for being warm to people from any caste, race, or colour. Therefore, the migration rate has increased. So, the population of Indore has been exponentially growing each day.

The people from across the globe have migrated to Indore for several reasons, including education, peacefulness, warmth, and livelihood. Besides, the people residing in Indore are highly developed and social. Indore is the biggest city in the state of Madhya Pradesh. It is commonly known as the commercial capital for the central part of India. It has been stated that Indore is the cleanest city in India.

Moreover, it is famous for being the Centre of attraction for tourists as it offers diversity in food culture. Thus, considering the diversity of food, it has been given the title of “Street food capital.” This city is well-known for its street food places such as Sarafa Bazar and Chhappan Dukan.

These places provide a variety of dishes, including the speciality of locals such as Poha, Jalebi, Bhutte ka kees, Garadu, and Malpua, South Indian, North India, Italian and Chinese cuisine. Sarafa Bazaar is the only food market that is not closed until 2 am. On the other hand, Chappan Dukan is an array of food stalls on the left and right side when you enter this street. Thus, it is considered famous among foodies.

10 Lines on Indore Essay in English

1. It is popularly referred to as the food city, mostly for its imarti and poha.
2. The world cup square is present only in Indore in India.
3. This city is very popular for the largest idol of Ganesha that is around 8 meters.
4. Lal Bagh Palace is the most elegant and beautiful entrance widely famous across the globe and is present in Indore.
5. CAT or the Centre for advanced technology is present in this city.
6. The largest colony of the city across Asia is the Sudama Nagar in Indore.
7. Indore houses Military Headquarters of War (MHOW) is considered one of India’s most important headquarters.
8. Indore has been taken from the name of the Indreshwar Temple.
9. This city is considered the Centre of education as it comprises IIM and IIT.
10. In the early years, Indore had been referred to as the City of Cotton Mills. 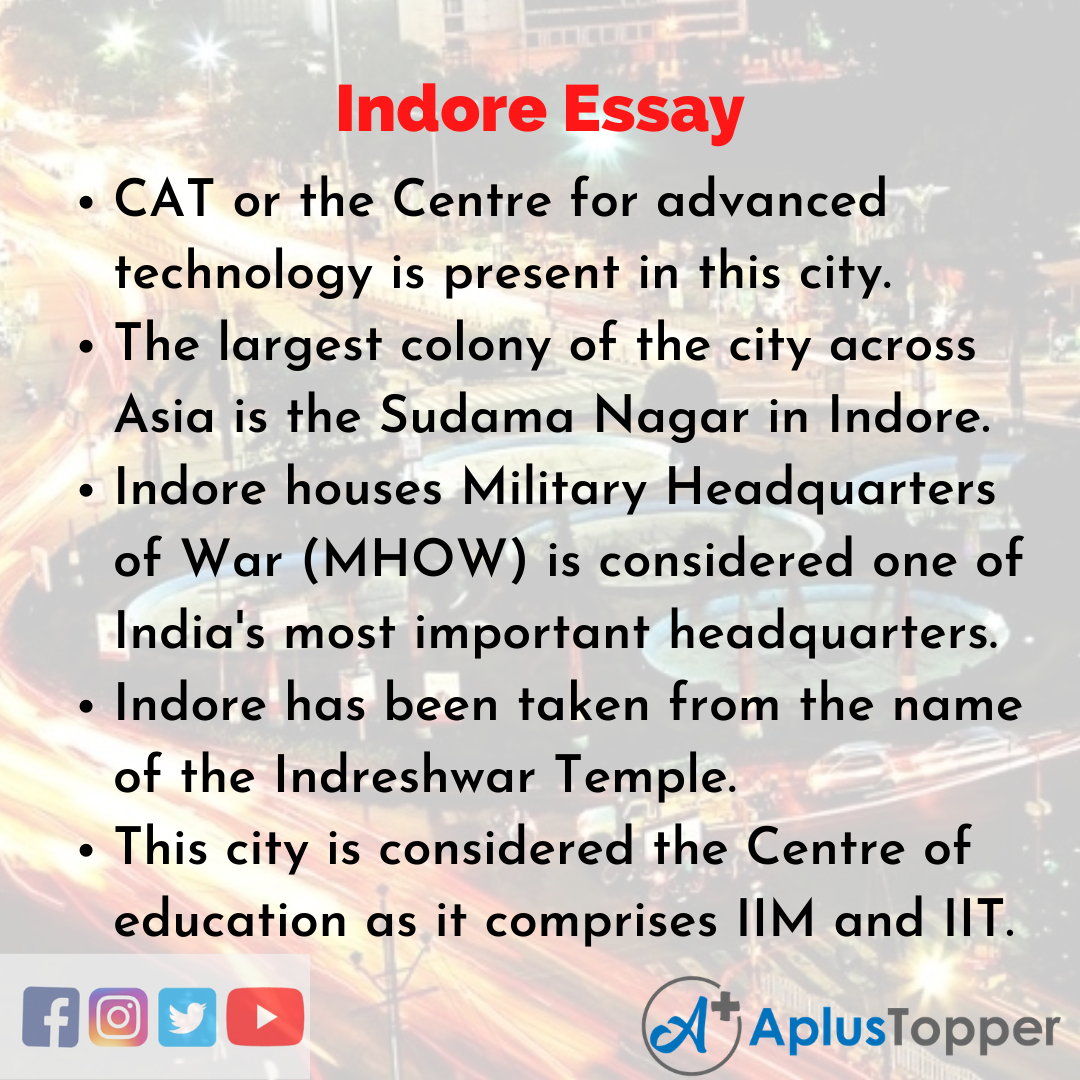 Question 1.
What are things that are very popular about Indore?

Answer:
Indore is widely known as a historical destination in the country.

Question 2.
When is it known to be a pleasant time to visit Indore?

Answer:
October to March is known to be a pleasant time for travelling to Indore.

Question 3.
What kinds of food are popular in Indore?

Question 4.
Which places are considered to be famous in Indore?