Essay On Indian Heritage: India is known for its unity in diversity. And the heritage of India is a testimony for this statement. India has numerous religions that millions of people follow and there are popular and historical heritage places from each of these religions. The fact that these heritages sights that were made thousands of years ago, still exists and is celebrated widely says a lot about how we Indians value our ancestral possessions and traditions.

In this Indian heritage essay, we are going to talk about the richness and vastness of Indian heritage, what it represents to today’s Indians and what is its significance in the future.

Find below the 600-word essay on Indian heritage is helpful to students of classes 7,8,9 and 10 in English.

India has a rich heritage in its history. Fromcho las and dravidas in the south to Mughals and Rajputs in the north, every region in every corner of the country has a unique story to tell. Some of the monuments and heritage sites like Hampi in Karnataka or Ajanta Ellora caves in Maharashtra are UNESCO world heritage sights. They are of the utmost importance to the tourism industry in India. Other than revenue, tourism and economic aspects of our heritage sites, the preservation of these heritage sites are important to celebrate the architectural and cultural marvels of our people thousand of years back.

If we look at the architectural and engineering marvel of heritage sites like Ajanta Ellora caves or Belur-Halebeed temples, it signifies the knowledge about art, engineering, management construction, patience and perseverance that people had back then. Many such monuments back then took more than 100 years to be built. Such caves and monuments are difficult to build even now, in 2020, with so much of technological and engineering expertise.

Taj Mahal has become the face of India in the rest of the world. The importance of love and sacrifice that the Taj Mahal signifies is an important message to people even today. Being one of the seven wonders of the world, the architectural marvel of Taj Mahal is beyond words to describe. From Taj Mahal to Laal Kila (red fort) to Qutub Minar and Jamma Masjid, the Mughal rule in India has definitely left its imprint in the country and it continues to leave one for years to come.

When we say heritage, it does not necessarily mean monuments and buildings. Heritage refers to any possession that our ancestral generations have left for us. In this Indian heritage essay, we will be talking about such possessions as well.

From the swords and jewels of Tipu Sultan, ruler in Karnataka, to the collection of vintage cars left behind by Rajput of Rajasthan and Maharajaas of Mysore region, such possessions in India are numerous. One of the biggest heritage of India, the Kohinoor diamond,  which was looted and taken away by the Britsh, still lies with the United Kingdom. There are various such valuable possessions in the UK and other parts of the world that belongs to India, which has never come to us, which rightly and fully belongs to us. In fact, the reparations that the UK has to pay India, for its brutal regime of 200 years in the country, will be in billions of dollars.

It is not just the architectural, artistic and engineering marvel that these heritages represent. They represent something far more than that. The sacrifices, immolations, tortures and renunciations that people had to go through while making these legendary arts. It is said that the labourers who built the Taj Mahal had their thumbs cut off so that they shall not be employed again to build a similar structure. While we awe the beauty of these structures now, we should also understand and learn from the sacrifices that went behind making these heritages.

Many statues of kings and queen were built by hard-working labourers, soldiers and artists. They are the real unsung heroes of those times and not just the queens and kings. The heritage of India celebrates not only the traditions and culture of our land but also the sacrifices and immolations that our heroes have gone through. 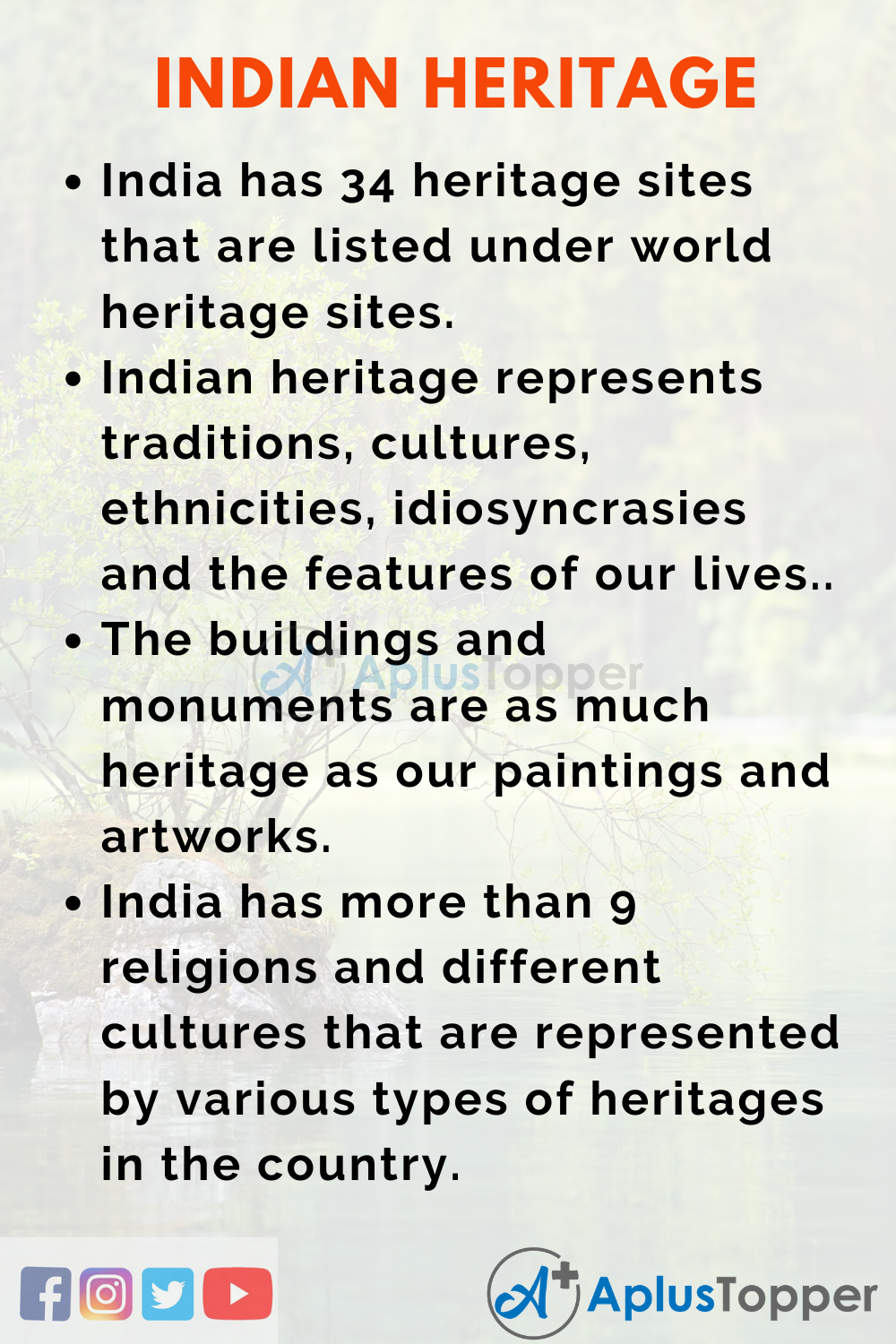 Find below a 200-word limit short essay on Indian heritage in English for schoolchildren and students of classes 1,2,3,4,5 and 6.

India represents 9 religions, tens of languages, hundreds of ethnicities and cultural backgrounds and yet works as one nation. India is, without an ounce of doubt,  a testimony for unity in diversity. There are hundreds of heritage sites in India namely, red fort, the Tajaj Mahal, Hampi temples, Ajanta Ellora caves, Gol Gumbaz, Hawa Mahal, Mysore palace and Qutub Minar. There were plenty of rulers who had their own set of heritage sites in India. Some of the popular rulers were the Rajputs, the Cholas, the Dravidians, the Mughals, the Mayuryans and finally the British raj. Each of the dynasties has left an imprint on the cultural as well as the political dynamics of the country that we see today in 2020.

The heritage sites also represent the sacrifices and the love for the motherland by our ancestors, other than the fact that people at that time were in fact ahead of us in architectural, management and engineering expertise. FAQ’s on Essay On Indian Heritage

Question 1.
What is Indian heritage?

Answer:
The valuable things we have inherited from our ancestors’ count as Indian heritage. These can be monuments, artifacts and paintings

Question 2.
What are the three types of heritages?

Question 3.
Which is the most popular heritage site in India?

Answer:
Ajanta Ellora caves in Maharashtra and Agra fort in Uttar Pradesh are considered as the most popular heritage sites in India.

Question 4.
Which is the heritage city of India?

Answer:
Jaipur in Rajasthan is known as the heritage city of India.