Essay on Indian Farmer: India is popularly known for its agrarian economy. According to World Bank data, nearly 42% of the workforce in India engages in agriculture. Agricultural production is crucial for a country such as India, the second-most populous country in the world.

A large percentage of our population lives in rural areas and engages in agriculture. Often referred to as the backbone of the Indian economy, farmers provide us with food. Their contributions to society are immeasurable. However, farmers face many hardships. Addressing their problems is the need of the hour. The prosperity of our agrarian economy depends upon our farmers.

Long Essay on Indian Farmer in English 500 Words in English

The long essay on Indian Farmer is suitable for students of class 7, 8, 9, 10, and competitive exam aspirants.

India is a developing country with an agrarian economy, with 70% of the population residing in villages. According to the World Bank data, 42% of the Indian workforce engages in agriculture. An economy that is heavily dependent on agriculture, farmers have a critical task to carry out. Farmers ensure that food production does not become stagnant in India and food availability for all.

India was initially dependent on the United States for food grains and would import it from abroad up. Importing became costly for India as more money drained from the country, and the United States increased the tariffs. India had no other option but to become self-sufficient and carry out food production at home. During Lal Bahadur Shastri’s reign as prime minister, the slogan ‘Jai Jawan Jai Kisan’ became popular. The green revolution in 1965 kick-started self – sufficiency in India, and surplus increased.

The green revolution helped the Indian Farmer as it brought about modern methods that helped increase productivity. Today, India is producing its food grains due to the contributions of farmers. Due to their hard work, India is a major exporter of rice, sugar, cotton, etc. making the country the 7th largest exporter in agriculture. They provide food for a population of more than a billion as well as foodgrains for other countries dependent on us.

However, farmers face many hardships. Many farmers get caught in a debt trap and face the brunt of moneylenders. Due to high-interest rates, the farmers use the profit that they get to pay off the debt and have very little money for their families. The land is not readily available; many times, there are land disputes, and the rent is expensive. Farmers suffer the most during droughts as there is not enough water available for the crops. Climate change also affects crop production. During periods of failed monsoons, many do not have proper irrigation facilities. Fertilizers and pesticides are not cheap. Many farmers are illiterate and do not know how to use technology. With the increasing rate in farmers’ suicide, addressing their issues is the need of the hour.

Eradication of corruption in agriculture and making loans readily available and at cheaper interest rates will help to mitigate their problems, and they can afford to buy fertilizers and pesticides. When crop production fails, they must receive some compensation so that they do not face poverty. The government has established a helpline to help farmers. Insurance is another way to help the Indian Farmer.

The government launched schemes to help farmers in India. Some of these include:

Farmers play a crucial role in agricultural production. They face many problems, and agriculture itself is a challenging and tricky occupation. The entire country depends on farmers and thus necessary to resolve their issues, help them become prosperous, have a better quality of life, and a higher standard of living.

Short Essay on Indian Farmer 200 Words in English for Kids

India has a population of billions and is very diverse. A large part of our social lives in villages, and many of them are farmers. Farmers are vital as they engage in agriculture. Through their hard work, they provide food for a largely populated country like India. Farmers also help our country to grow, and we no longer depend on other countries for our food grains. Many of these countries get food grains from India, such as rice, sugar, cotton, etc. The green revolution has made it easier for farmers.

However, farmers face many problems. When monsoons get delayed, the crops cannot grow, and farmers do not earn money. Climate change has affected crop production. When farmers take loans from moneylenders, `they cannot pay back if the crop fails and sometimes the moneylenders cheat them. Many farmers do not receive an education and find it difficult to use technology. They cannot afford fertilizers and pesticides.

The government launched many programs to help the Indian Farmer. There is also a helpline available. Often called as the backbone of our country, farmers are essential to our economy. They help our country grow. Many of them live in misery, and we must make their lives better. 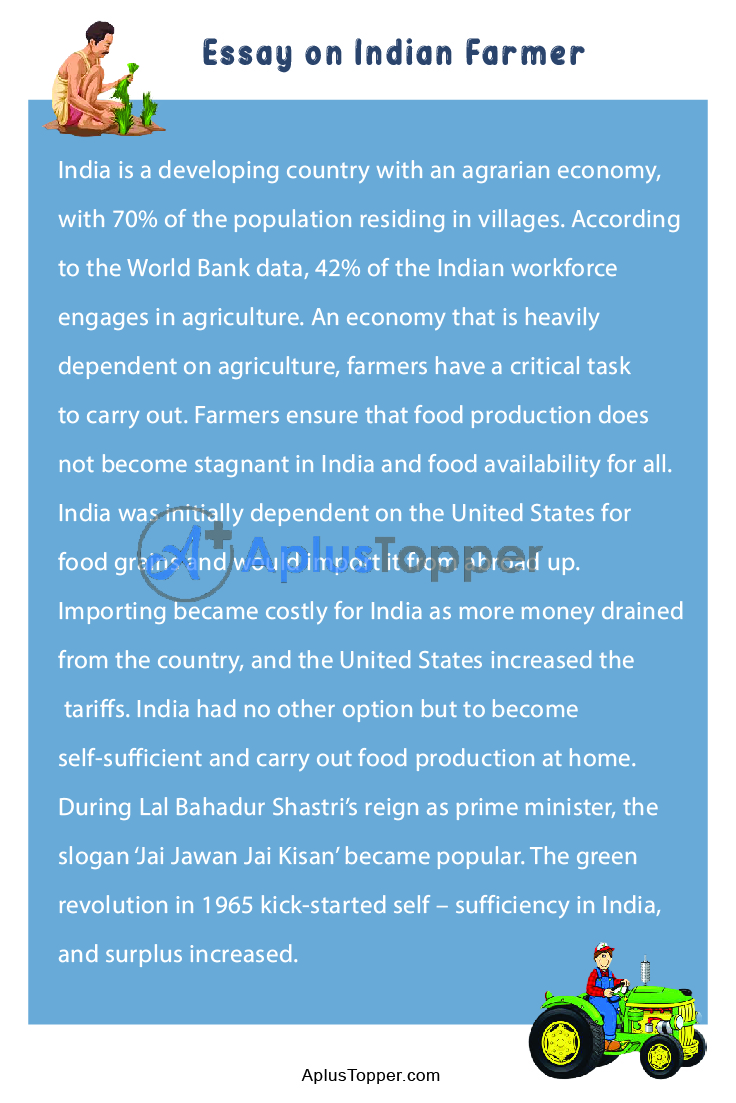 These ten lines are suitable for competitive exam aspirants and while making speeches.

FAQ’s On Essay on Indian Farmer

Question 1.
How much percentage of the workforce engages in agriculture?

Answer:
42% of the Indian workforce engages in agriculture.

Question 2.
How has the green revolution benefited farmers in India?

Answer:
The green revolution brought in modern methods of agriculture to boost production. Due to their efforts, India is self-sufficient and the 7th largest exporters of food grains.

Question 3.
What hardships does the Indian framer face?

Answer:
Droughts, high-interest rates charged by money lenders, the rising cost of fertilizers, pesticides, and illiteracy are the hardships that Indian farmers face.

Question 4.
What are some of the government schemes that benefit farmers?