Essay on Guwahati: Guwahati is referred to as the gateway to the north-east of India. And Guwahati is also the largest city of that region. The former name of the city was Gauhati, which was changed to Guwahati in 1983. Hills and hillocks surround almost 3/4th part of the city.

Guwahati is situated between the foothills of the Shillong plateau and the southern bank of the river Brahmaputra. Guwahati with one of the major riverine ports is also a very fast-growing city. Guwahati is also called the ‘City of Temples’ because of the presence of several popular ancient Hindu temples.

We are providing students with a long essay on Guwahati of 500 words and a short essay on the same topic of 150 words for reference.

The varied history of the Pragiyotishpura city that is now known as Guwahati dates back to the 6th century. Pragiyatishpura means the ‘The Light of East’ and this ancient name of Guwahati is mentioned in Ramayan, Mahabharat, and Raghuvansha of Kalidas. Along with the rich heritage, Guwahati has also developed to become an important city in Assam.

Guwahati is situated between the south bank of river Brahmaputra and the foothill of the Shillong Plateau. The city is also called the ‘Gateway to North East of India’. The former capital city of Assam, Guwahati is the largest city among the eight north-eastern states.

Guwahati represents a miniature Assam to visitors with its terrain and structure of the city with the presence of the great Brahmaputra River bisecting the area in two parts. The collection of inhabitants in Guwahati alone is notable as their lifestyle is highly dependent on the mighty river. The city of Guwahati, with a population of over a million, also seems like an overwhelmingly crowded place. The streets during office hours are astir with people and vehicles that make traffic snarls very common every day.

Guwahati region is the host habitat for a wide range of wildlife like rhinoceros, Asian elephants, pythons, tigers, endangered rare birds, etc. The best time to visit the city of Guwahati is between months October to April, for the tourist attraction sites like Kaziranga National Park, Manas National Park, etc. remain closed during monsoon season (April to mid-September).

Guwahati is an ideal place for recreation and retreat as the region consists of green hills, tea plantation, religious places, art workshops, educational institutes, etc. The city offers a plethora of historical evidence, archaeological sites, and educative museums because of the ancient roots that date back to the 9th century. Guwahati is a vibrant cosmopolitan city, offers the tourists an opportunity to interact with natives of the state but also immigrant populace from adjoining sister states. One should never miss the opportunity of indulging in authentic Assamese food as well as Eastern Indian food mix when they visit Guwahati.

Support the local artists of Assam by buying their indigenous craft goods and art items that are created with sheer talent, innovativeness and massive effort. These artists travel far as they come to sell their bag full of goodies in the Guwahati markets.

Guwahati has it all starting from the Planetarium that explains one about the planets, to the Nine Temples devoted to the astrological celestial bodies. Even though the Nine Temples on the hilltop of Navgraha Hill (the Chitrasal Hill) are dedicated to the planets, however, there are also nine Shivlingas inside the temple with the symbolic colour garment of the nine celestial entities.

The Kamakhya Temple, along with several other ancient temples are situated on the Nilachal Hill which is about 7km from Guwahati, is a site of great religious, historical and archaeological importance. The ancient architecture of the temples, greenery and the scenic excellence of the city along of the riverine view makes it tourism hub. 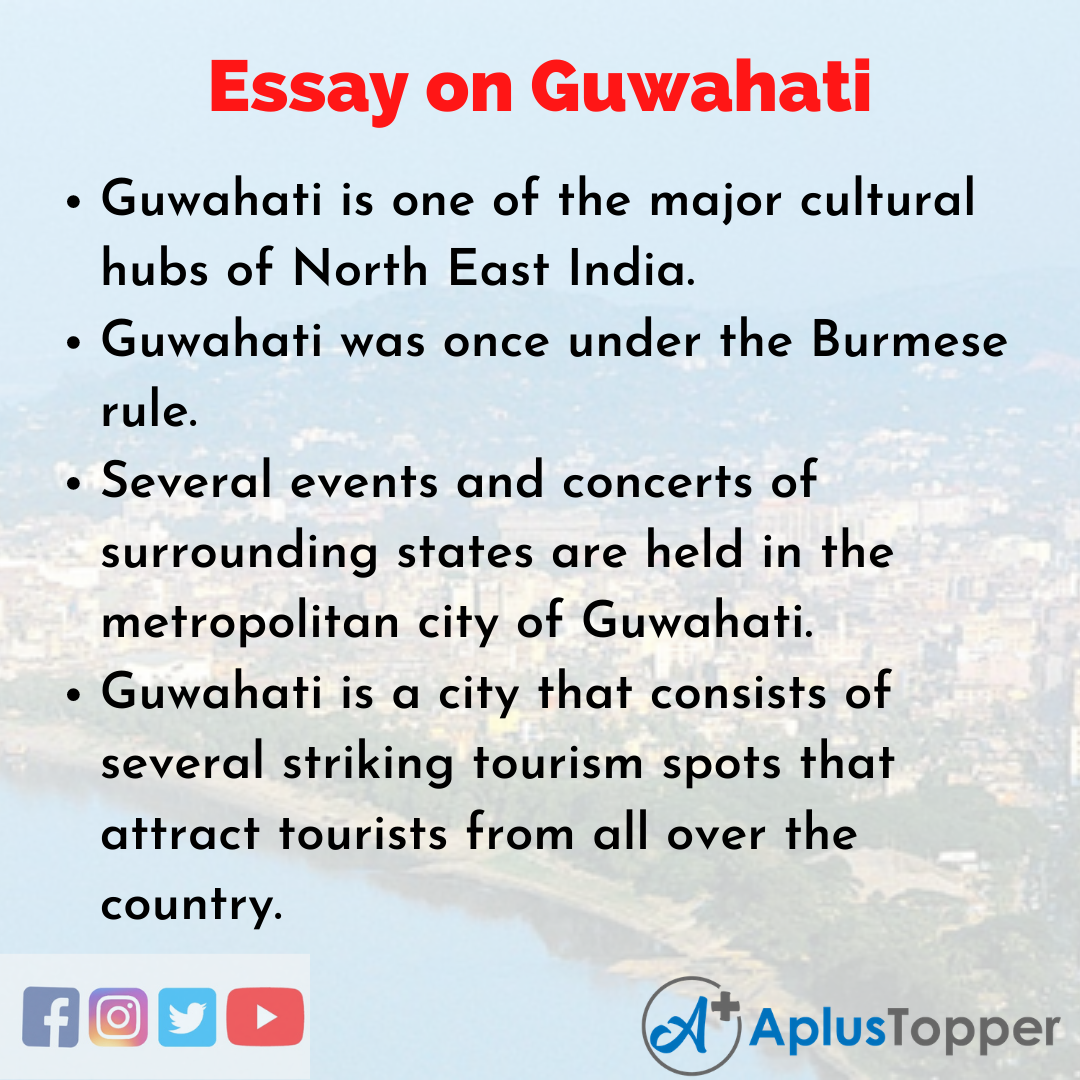 The fifth-fastest developing city in India is the beautiful city of Guwahati situated on the southern bank of the Brahmaputra River. In ancient times, Guwahati was made of two regions, namely Pragiyatishpura and Durjaya, which are even mentioned in the Hindu Purans.

Since religious temples like the Kamakhya Temple, Umananda Temple, Basistha Temple, Ugratara Temple, Doulgovinda Temple, etc. are situated in Guwahati that is why it is also referred to ‘The city of Temples’. Guwahati is the largest city among the states of North-East India, with an area of 328 square kilometres.

The exquisite Assamese handicraft and cuisine can be enjoyed when in Guwahati. Also, the scenic beauty of the green hilly regions of Guwahati is the habitat for various rare flora and fauna. Guwahati consist of several National Parks that are visited by tourists from all over the world to spot the one-horned Indian rhinoceros. All these and more make Guwahati a tourist magnet area.

10 Lines on Guwahati Essay in English

1. Guwahati is one of the major cultural hubs of North East India.
2. Guwahati was once under the Burmese rule.
3. Several events and concerts of surrounding states are held in the metropolitan city of Guwahati.
4. Guwahati is a city that consists of several striking tourism spots that attract tourists from all over the country.
5. Head over to local restaurants and food joints serving authentic Assamese or tribal dishes when in Guwahati.
6. If one is planning to visit Guwahati during tourist season, then it is advised to make advance hotel bookings.
7. The most favourable time to visit Guwahati is between the months of October to early April.
8. One of the major festivals held in Guwahati is Bihu.
9. The three types of Bihu festivals celebrated are the Rongali Bihu (held in mid-April), Maagh Bihu (held in mid-January), and Kati Bihu (held in October).
10. One should avoid monsoons when travelling to Guwahati for pleasure. 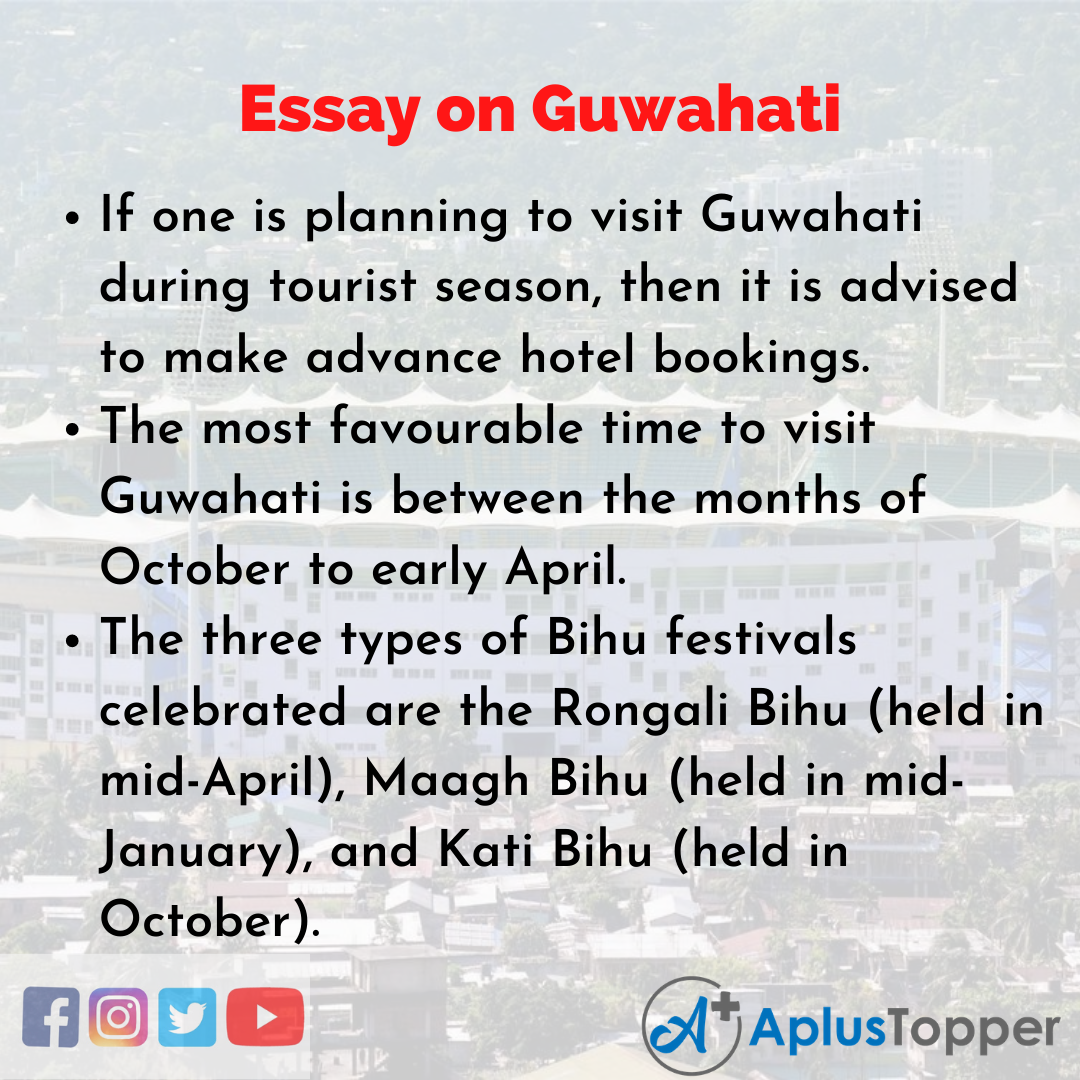 Question 1.
What are the most abundantly spoken languages in Guwahati?

Answer:
Assamese, Bengali, Hindi and English are some of the most widely spoken languages in Guwahati.

Question 2.
Which are the major religions of the populace in Guwahati?

Answer:
Hinduism, Christianity and Islam are the major religions of the people living in Guwahati.

Answer:
Yes, Guwahati is a very safe city with welcoming people. However, like any part of India or the world, while travelling, it is best to stay cautious about oneself and their belongings.

Question 4.
Do we have to learn Assamese before visiting Guwahati?

Answer:
Not really. You can communicate in Hindi, Bengali or English during your stay in Guwahati. However, it is advised to learn a few greeting phrases while visiting a foreign place that might come in handy.