Essay on Global Terrorism: Global Terrorism indicates to the ubiquity of terrorism and terror modules at various important locations worldwide. Global terrorism works through extremist terror groups, sponsored mostly by Islamic clerics and countries. The only agenda they have is to change the entire world into a state of fear and idealistic agenda.

We provide children and students with essay samples on a long essay of 800 words and a short essay of 250 words on the topic “Global Terrorism” for reference.

Terrorism is usually defined as using indiscriminate destruction to provoke fear or terror in people’s hearts to attain financial, religious, ideological or political goals. In recent years, terrorism has expanded its appendages globally and is the favourite fanatics method to achieve what they aspire. Terrorism is a crucial quandary all across the world at the moment. It influences a country’s automation. Terrorists were formed in the name of religion. The world is united today in a manner never seen before in history.

The world has evolved significantly after the September 11 attacks. Safety has become an all-encompassing concern. Nowadays, people plan their holidays according to the factor, such as whether the destination is secure or not, which route has the least danger. Besides, people no longer feel secure or protected in their own countries since terrorist attacks have taken place in nations that were deemed safe and at various locations such as parks, bars and even roadways. The use of violence and threatening to persevere political/ideological/religious purposes is referred to as ‘terrorism’. This has become one of the most significant dilemmas in almost every part of the world. It is the most terrible thing to have hit various countries in this century.

Global terrorism attains in various forms which involve suicide bombings and attacks on foreign countries. One prominent example of Global Terrorism attack was in the year 2001 on September 11, where members of a terrorist organisation called Al Qaeda flew airliners into the World Trade Center in New York City. When terrorism takes place, it does not only harms the country in which the violence or threats are taking place, but it also involves many nations. Sterner security and global cooperation are often needed to stop terrorist groups from succeeding in their cause.

Terrorism also has economic consequences, both directly and indirectly. Terrorists target structures and areas that are essential financially or in terms of perceptibility or both. They damage buildings, devices, plants, transportation and other financial resources that can cost between thousands and billions of dollars in repairing or constructing. Trade, stock markets, insurance and tourism also take severe hits due to terrorist attacks.

Terrorism has also contributed to the growth of nationalism and heightened scepticism of international businesses, cultures, emigrants, and expatriates. Racism is on the surge across the globe, and countries are closing their borders to immigrants, thus reducing economic transactions’ size and diversity, which has political consequences. Brexit and Donald Trump’s election as President reflects the increasingly isolated and nationalist reasoning of people who have grown very sceptical of foreigners and are allowing their prejudices to drape out for everyone to see.

Terrorists usually deploy bombs and guns in their attacks and areas like airports, railway stations or concert halls are their chief targets of attack. To summarise, we can look at countless events like an attack in Belgium or Western European areas where many civilians were executed. There are various ways to fight terrorism.

The first and foremost thing is, to have an international team always on call to answer such kinds of menaces so that there is a minimum loss of human life and resources. Apart from this, gun control is another potential explication of global terrorism. Identification of a terrorist organisation can also benefit from evading any kind of future terrorist attacks. 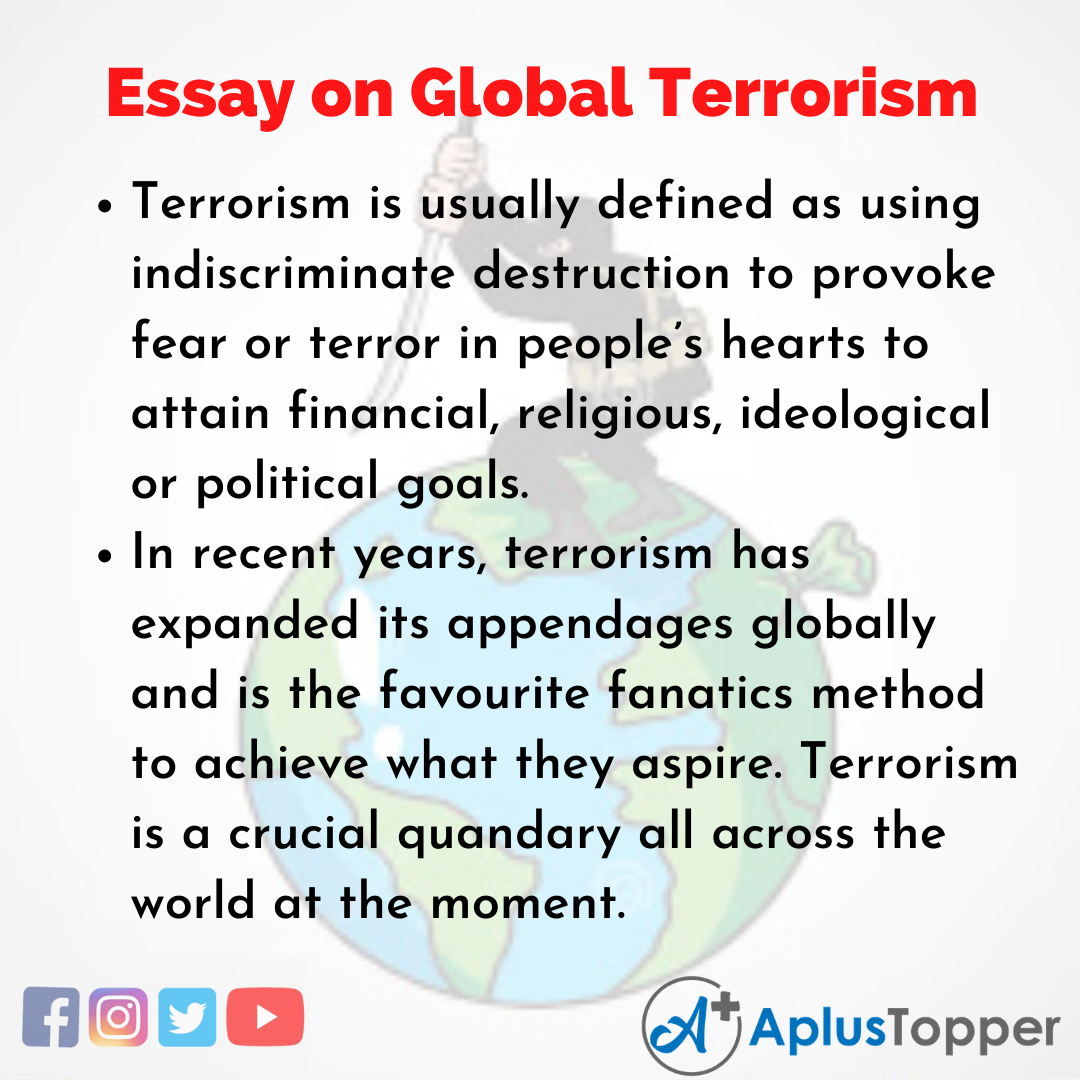 Despite being the predominant topic in headlines globally, terrorism doesn’t have a universally agreed explanation. In general terms, the use of perils or destruction to accomplish a particular purpose is called terrorism—legal interpretations of what composes terrorism changes from country to country. Over the past years, acts of terrorism have developed across the world.

Terrorism has subsisted for a long time in human history. Some examples are the Jewish Sicarii who wanted to abolish Roman rule in the Middle East. They assumed that Jews cannot be ruled by other people and should only be ruled by God. To further their purposes, they targeted Jewish supporters of the Roman Empire.

Another example is Guy Fawkes, who planned a terrorist plot in order to establish a Catholic monarch over England. In France, the Republic’s establishment was supported by “The Reign of Terror”, a phase during which the state-sponsored terrorist actions against the nobility and anyone believed to be assisting them. The 20th and 21st Century terrorism is the one we are most familiar with, was incited after World War II. Nationalist movements began expanding all across lands that were colonial boundaries of European empires. Thanks to a well-connected world, these movements directly paid consideration to their causes and exert influence over international policy.

People in different parts of the world were apt to pick up on this approach to bring local problems to global attention, and modern terrorism was born. This version of terrorism reached its zenith on September 11, 2001, popularly known as 9/11, attacks on the Twin Trade Towers and the Pentagon in the United States of America.

The loss of life was huge – almost 3000 people were killed, and more than 6000 people were wounded in the course of a few minutes. It garnered global attention considerately on terrorism and became the idea behind the War on Terror that affected the United States and its associates into Iraq and Afghanistan.

The word terrorism symbolises extremists who use fear tactics to develop terror in people’s hearts everywhere. They succeed in it because they target commoners in places such as schools, markets, pubs, nightclubs, churches, and mosques. Terrorism is a tactic that various organisations use to accomplish their aims by targeting innocent people. Terrorist attacks affect public confidence and create an atmosphere of fear. These attacks form partitions between people from different ethnicities, countries, and religions. Instead of coming together to fight this hazard, people are sceptical of each other and close themselves up.

India has shown concern over the probability of terrorists taking hold of chemical weapons and has asked for unrelenting global action towards them. As per Indian intelligence, terrorists engaged in these attacks either had close links with or were prepared by handlers in Pakistan or terrorist groups such as Al-Qaeda. These organisations also determined that Pakistan’s ISI has been helping these organisations clandestinely.

Based on this and further intelligence, India has been striving to have Pakistan labelled as a terrorist state. Pakistan enjoys China’s support, which itself is a constituent of the UN Security Council and has a requisite veto. In addition, nations like the US and UK have adjudicated to downplay these attacks as a result of strains between India and Pakistan rather than labelling them as the terrorist attacks they are.

India has been striving to use global affront to have Pakistan identified as a terrorist state. In this effort, it hasn’t encountered much success. So far, India’s procedures for tackling this threat have been non-violent. However, it might be the time for a significant belligerent solution to the problem of global terrorism’s attacks on India. 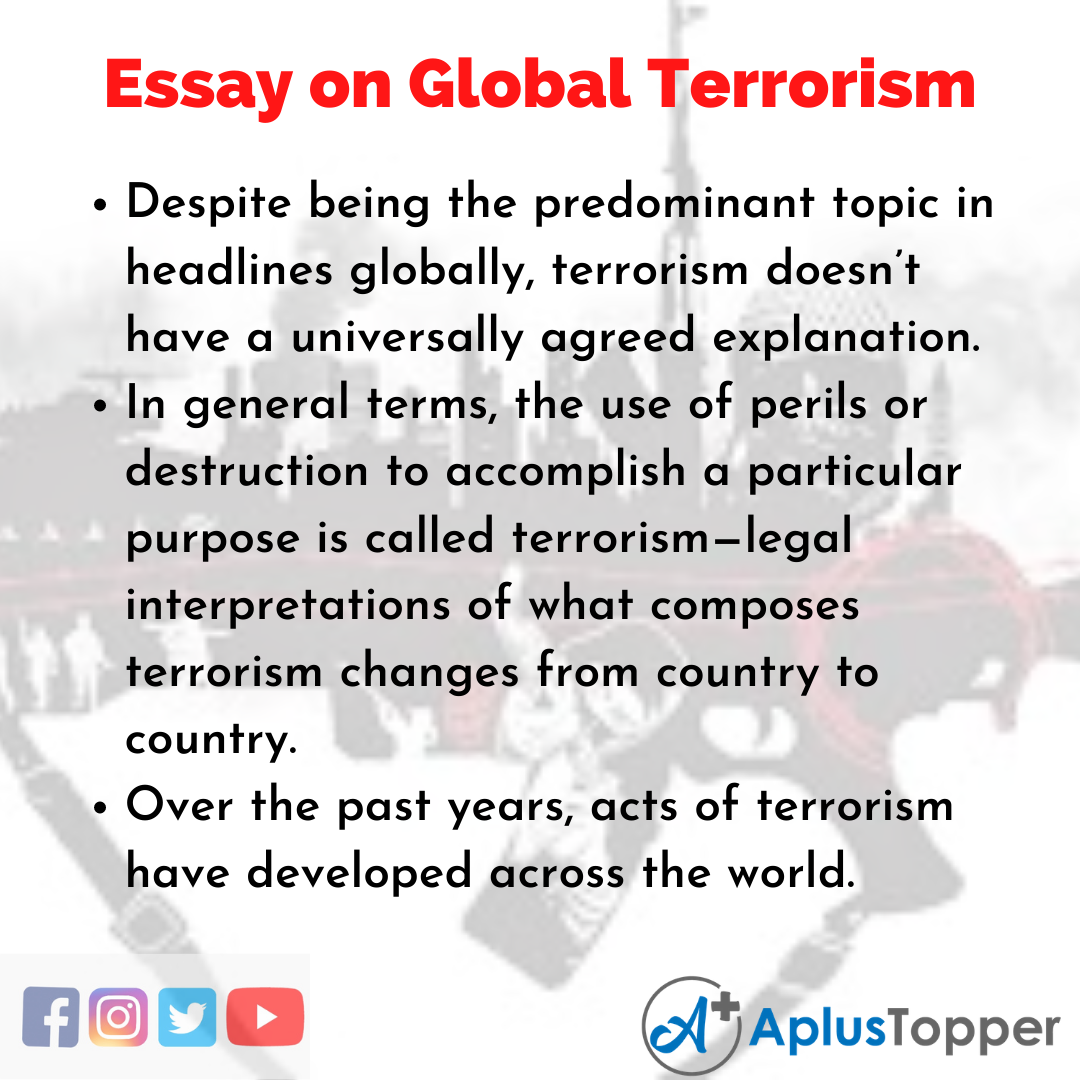 Terrorism is certainly an actuality of modern times. The insignificant threat of a terrorist strike is sufficient to create panic and terror amongst the general masses. The calamities of terrorism aren’t only the people killed or wounded in terrorist attacks; humanity as a whole becomes a catastrophe. People who don’t look like us or speak like us or pray to the same God become ‘other’. Terrorism undertakes the very foundation of human relations, and if it isn’t corrected, it will eat up humanity from the inside out. We cannot negate the fact that global terrorism has impacted policy decisions to a great extent.  The internet has also provided terrorist groups with a global platform to broadcast their agenda and hire more people.