Essay on Fit India Abhiyan: Fit India Abhiyan is a nationwide movement launched by the current prime minister of India Narendra Modi at Indira Gandhi Stadium in New Delhi. On 29 August 2019, which is celebrated as the National Sports day, this movement which encourages people to remain healthy and fit by including physical activities and sports in their daily lives.

The movement has gained popularity after celebrities, and sports personalities have started participating in the movement. Short and Long essays on Fit India Abhiyan launched by the Ministry of Youth Affairs and sports are given below.

Every year National Sports day is celebrated on 29 August, on the birth anniversary of Major Dhyanchand, the hockey wizard and legendary player termed as the best ever. On 29 August 2019, Prime Minister Narendra Modi launched Fit India Abhiyan with a motive to encourage people to include physical activities and sports in their daily lives.

Due to technological advancements, our physical activities are reduced. This change in lifestyle has brought about cases of lifestyle diseases in younger people as well. Diseases like diabetes and hypertension are repeatedly on the rise and affecting more and more younger individuals. With the Fit India movement, the aim is to cultivate a strong sense of belief towards fitness and healthy lifestyle.

To improve upon one’s health is one’s own responsibility as a healthy mind can reside only in a healthy body. To perform well in any profession one requires to have a physical and mental well being. The movement also encourages participation in sports as it is directly related to fitness. Successful sportspersons are among the fittest persons who worship their bodies and take complete care of it. Many sports personalities, celebrities and politicians such as Anupam Kher, Sachin Tendulkar, Shilpa Shetty have come forward in support of the movement. 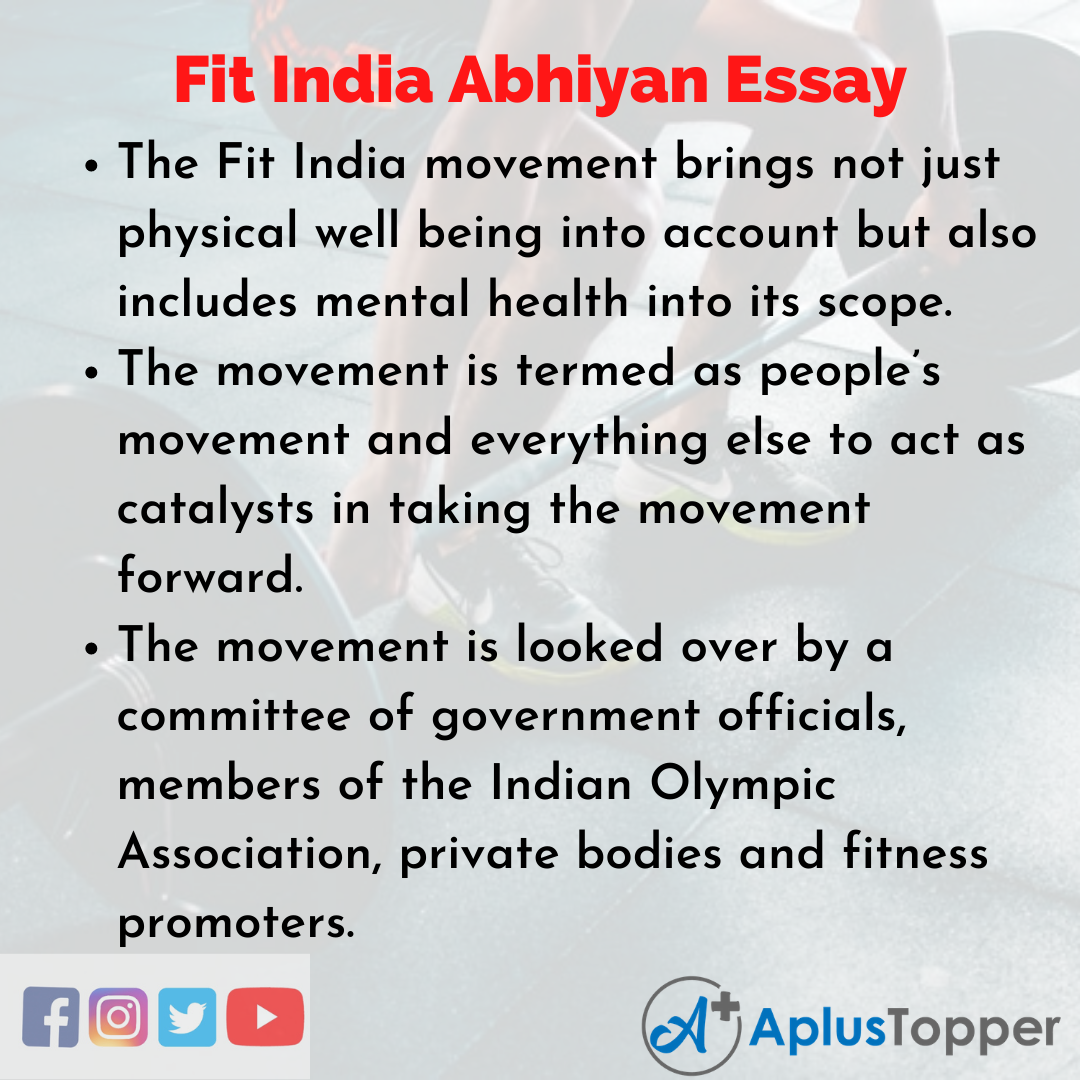 The ministry of Youth affairs and sports on 29 August 2019 launched Fit India movement kickstarted by the Prime Minister of India, Narendra Modi, who advocated the need for physical activities and sports in our lifestyle. A committee headed the Sports Minister Kiren Rijiju, are responsible to take the movement forward to newer heights.

The need for a nationwide movement was orchestrated by the present lifestyle of people, that does not include much physical activity. With improvements in technology, we can measure the number of steps we took every day using a mobile app, but the same is the reason for our lack of movement and activity. This change in lifestyle is also the root cause of many lifestyle diseases such as diabetes, hypertension, diabetes, heart diseases and stroke.

The probability of these diseases can be reduced much by small lifestyle changes. Including physical routine in daily lives can help in pumping heart rate up that reduces the risk of a majority of heart diseases. Also, the horizon of fitness is not limited to physical sense but also to mental well being and lifestyle changes to improve one’s overall health. As sports is relative to fitness, the movement also encourages involvement in various sports. Training the body and training the mind as well as using sports as a tool. The Prime Minister stressed the use of sports as a basic lifestyle activity that improves upon one’s overall health. He also congratulated our sports personalities for their performance at the world stages and making the country proud.

Sports personalities such as Sachin Tendulkar, Virat Kohli celebrities such as Karan Johar, Sunil Shetty and many others have come out in supporting this movement. The popular #FitIndiaMovement was viral on Twitter, and many celebrities were posting their videos of working out, cycling, swimming, meditating or indulging in any physical activity. As the Prime Minister stated that this is a people’s movement and it can only succeed with public participation. The ministry also organises various events such as marathons, yoga events, cyclothon, among many others.

With the Fit India movement encouraging people to improve upon their lifestyle, we are also improving our country. As healthy individuals, we can contribute more to the development of the nation. Fitness and sports have been a part of our legacy. Healthy individual’s make a healthy family and a healthy society which is the new face of Fit India. The Fit India Movement was launched on National Sports at Indira Gandhi Stadium in New Delhi on 29 August 2019. The movement was launched by Narendra Modi, who has been vocal about improving one’s physical health by taking part in physical activities. To encourage this, the Fit India Movement was launched on the birth anniversary of hockey wizard and legend, Major Dhyan Chand. The Prime Minister also congratulated young sports personalities for their outstanding performances at world stages bringing medals and glory to the country and keeping the tricolour afloat.

The movement is a nationwide movement that hopes to instil a sense of well being in this modern age where convenience outweighs health. With advancements in technology and medicine, we believe we have the cure for every disease, but that is not at all a correct approach. Many cases of lifestyle diseases are now young individuals. Cases of diabetes, hypertension, stroke and heart diseases are continuously on the rise. These are those diseases which can be prevented by making informed changes in the lifestyle.

The Fit India movement brings not just physical well being into account but also includes mental health into its scope. The movement is termed as people’s movement and everything else to act as catalysts in taking the movement forward. The movement is looked over by a committee of government officials, members of the Indian Olympic Association, private bodies and fitness promoters. The committee is headed by Kiren Rijiju, the current sports minister. The Ministry of Youth Affairs and Sport organises various events under the banner of Fit India movement to spread awareness about the importance of physical activity and popularise the movement.

The movement has seen participation from schools, celebrities, sports personalities and politicians promoting the movement. The Fit India movement promotes sports activities to bring about lifestyle changes in people using the fun way. Sports has been an integral part of our childhood, and it brings back good memories in each one of us. So taking out time to invest in sports will keep us happy and in good shape as well. Sports has been relative to the term fitness. Sports personalities who have achieved success in their respective fields focus on their fitness and are fond of their fitness as well.

Investing time in your health helps you to perform better in other areas as physical well being translates to mental well being, which translates into success in the respective fields. The movement will pave the way for healthy individuals who are a part of a healthy family and a healthy society. Only a healthy society can lead to a nation’s development. The Fit India grading brings a sense of healthy competition by grading schools according to fitness. Schools can also apply for the Fit India logo by performing well in these competitions. Various events such as cyclothon, marathons, run for fun, meditation, yoga and school-level activities allow for people’s participation. Only with more participation from the common public will the movement pick up popularity among young people. The movement is one that works for the nation’s improvement by improving the health of its citizens. 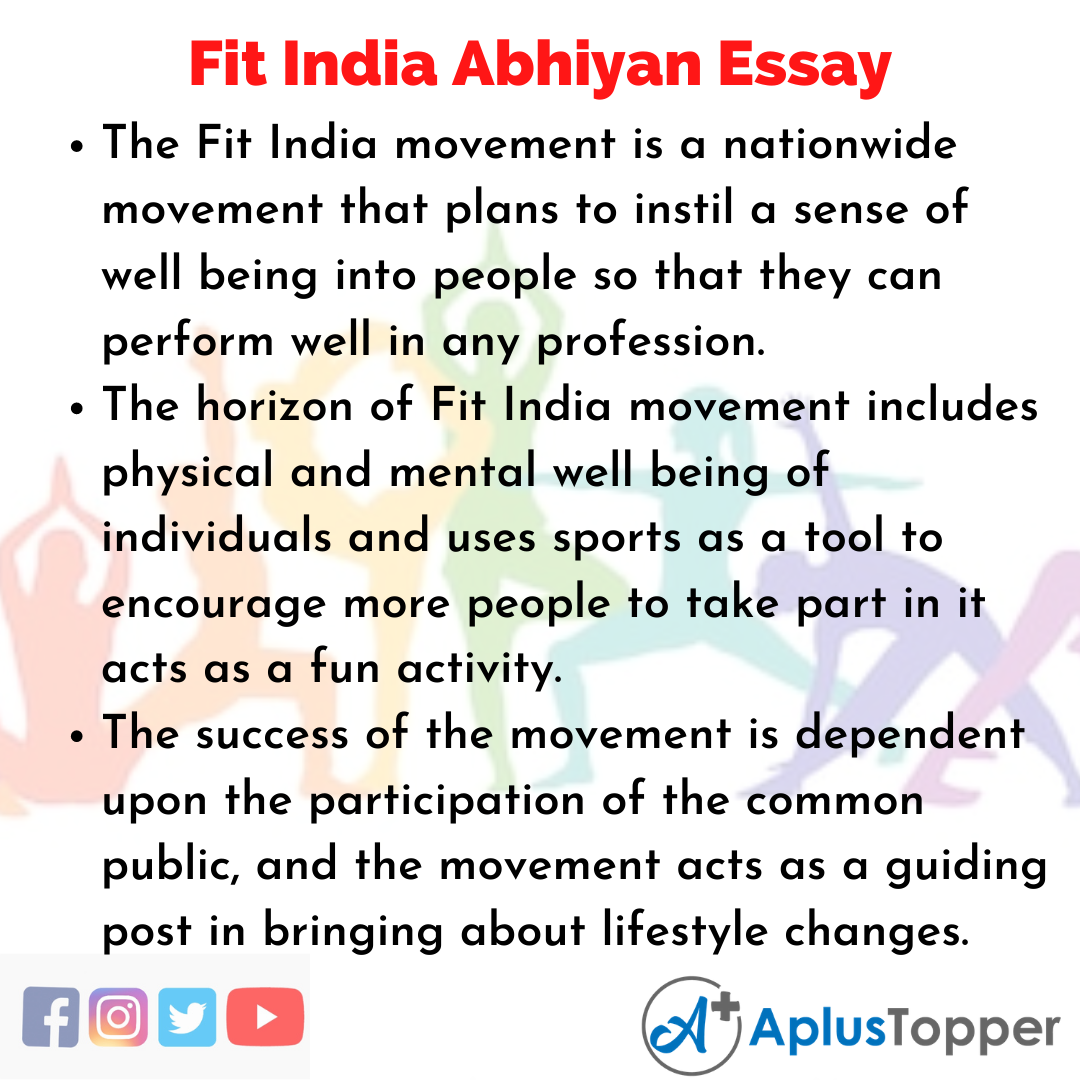 The Fit India movement is a nationwide movement that plans to instil a sense of well being into people so that they can perform well in any profession. The horizon of Fit India movement includes physical and mental well being of individuals and uses sports as a tool to encourage more people to take part in it acts as a fun activity. The success of the movement is dependent upon the participation of the common public, and the movement acts as a guiding post in bringing about lifestyle changes.