Essay on Ek Bharat Shreshtha Bharat: India is a country where people follow various religion. It has a rich heritage and ethnicity. People speak various languages and dialects. But, still, all the Indians are one nation. They have mutual love and respect for each other. The Ek Bharat Shrestha Bharat scheme is a programme to strengthen this unity among the people of India. The programme was started by the Prime minister of India, Mr Narendra Midi, where the states and union territories of India exchange the various customs and practices. This will promote and signify the customs and identity of particular states and union territories and will also enhance mutual love and respect for each other. This will encourage brotherhood and integrity among the diverse nation.

We are providing the students with essay samples on an extended essay of 500 words and a short essay of 150 words on Ek Bharat Shrestha Bharat’s topic.

Long Essay on Ek Bharat Shreshtha Bharat is usually given to classes 7, 8, 9, and 10.

India is a country that is rich in culture and heritage. It is the most diverse country in the entire world. However, unity among the citizens is a unique feature of this country. In a view to strengthening this unity, the Prime Minister of India, Mr Narendra Modi launched a nationwide programme called the “Ek Bharat Shrestha Bharat” programme on 31st October 2015. This particular programme was launched on the auspicious 140th birth anniversary of Sardar Vallabhbhai Patel. Sardar Vallavbhai Patel was a great freedom fighter of India who served as the Deputy Prime Minister and Home Minister. He is also given the title of “The Iron man of India”.

The role of Sardar Vallavbhai Patel in gaining freedom of India and making it a Republic is immense. He had United all the provinces and princely states of India during the Freedom struggle movement to get independence from the British Rule. He has ignited the flame of unity along with other freedom fighters which are still alive. So this programme is dedicated to his contribution to the unity and integrity among the people of India.

This programme involves the mutual exchange of culture between the different states and Union Territories if India. This will be held from time to time. This will ensure a good sense of unity and integrity in the whole country. This will also help people to accept and promote their own culture and identity. This programme recognises the rich culture of people in a particular area. People who are unaware of their own culture will get to know about their own and respect each other’s culture. The scheme initially had 11 ministers, including the Department of Higher Education, Department of School Education and Literacy, Department of Sports, and Ministry of Information and Broadcasting.

India has the most diversified culture and language. There are as many as 1075 languages and dialects of the Indian country. One will observe the slight difference in language in every 6 kilometres of length. Although Hindi is a majorly spoken language, however, there are as many as 22 Scheduled Languages spoken by India’s people. Not only language, but India is a secular country. Every citizen is free to practise, profess and propagate the religion he or she likes. The State favours no particular religion. There is no state law. However, most of the population practises Hinduism, followed by Islam, Christianity, Sikhism, Buddhism, and Jainism. Some people are atheists.

Despite all these differences, the difference in language, culture, ethnicity, religion, there are no hindrances to unity. Fraternity is the essence of the Indian counter. The whole country is a big family. This programme fosters this beautiful and divine quality and retains them. When the states and Union Territories are paired from time to time, they are mutually bonded. They share common cuisines, dance forms, festivals and other events. In this way, brotherhood remains intact. The society becomes healthy and rich to dwell in. 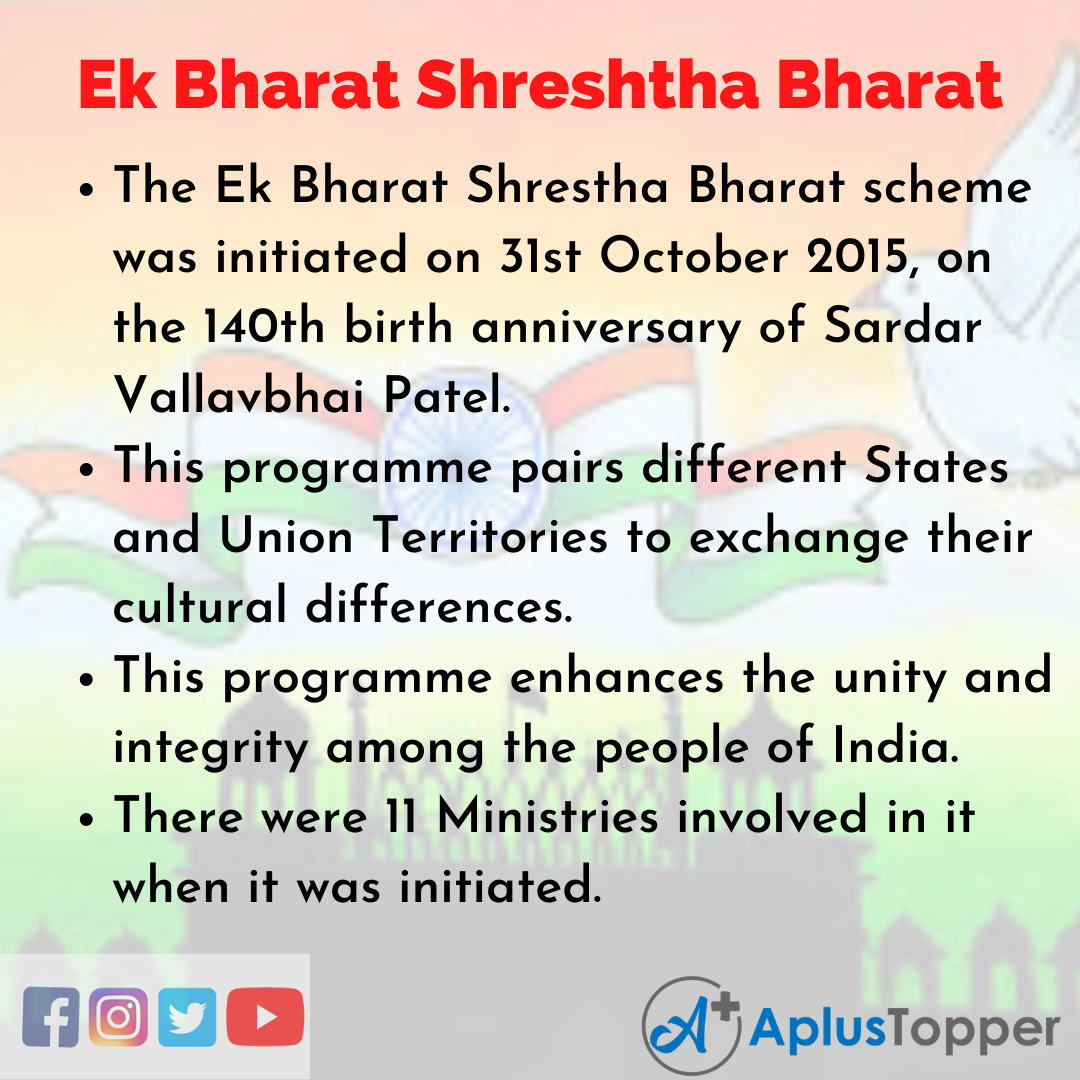 The Ek Bharat Shreshtha Bharat programme was launched on the auspicious 140th birth anniversary of Sardar Vallavbhai Patel on 31st October 2015 by the Prime minister Narendra Modi. This programme has been initiated to promote and strengthen the unity and integrity of the country. Under this scheme, the States and Union Territories are paired to exchange their culture and other practices mutually. In this way, the citizens get to know about their glorious history, their customs, traditions, philosophies, cuisines and other differences and respect the others. Question 1.
When was the Ek Bharat Shreshtha Bharat scheme announced?

Question 2.
What does the Ek Bharat Shreshtha Bharat connote?

Answer:
The Ek Bharat Shrestha Bharat withholds the concept of Unity in Diversity.