Essay on Dhanbad: The city is considered the second most populated city of India, located in the Jharkhand state of India. The city ranks as the 33rd largest city of India and ranks about 42nd largest city with millions of urban establishments. The population of the city is around 11.6 lakhs.

The total area covered by the city is around 577 square kilometres. The city is at a distance of 148 kilometres from the capital city Ranchi. The city of Dhanbad is famous for having the highest amount of coal mines in the country.

We provide the students with easy samples on a long essay of 500 words and a short essay of 150 words on the topic Dhanbad for reference.

The city is located in the eastern part of India. The city is primarily a commercial city. Dhanbad is well known for the largest number of coal mines present in it. This is why the city is known as the “Coal Capital of India.”

Despite the coal mines present in the city, the city still ranks as the 56th cleanest city in India. This rank was given by the “Swachh Survekshan 2019”. The following change took place in one year between the period of 2018-2019. In 2018, the city was considered one of the dirtiest cities in India. The municipal corporation of Dhanbad has worked a lot to maintain the greenery of the city.

The rail division of Dhanbad ranks as the second-highest division in the generation of review. According to a survey, Dhanbad’s city is ranked for the availability of the highest 4G network.

The city of Dhanbad used to be a part of the Manbhum region, which fell under the Bihar region and was under the control of the Mundari tribes. Even a lot of powerful kingdoms, such as Sasankas, ruled the ancient city of Dhanbad. During British rule, the city was one of the districts of East India, which was surrounded by dense forests and was known for the rich mineral resources present in the city. A lot of people from different religious and social groups used to live in the city.

After India got its independence, the city of Dhanbad became a part of Bihar. In 1950, when the re-organization of states took place, the city became a part of West Bengal. During the same year, the present-day Purulia district moved out of the Manbhum district. When the settlement report of Manbhum was made in the year 1928, it was mentioned that no rock inscriptions, old coins, or old copper plates were found during the survey and settlement operations of the land. The documents found during the oldest times were inscribed in paper and were done about 100 years before.

The city of Dhanbad stayed in the Manbhum district from the year 1928 to 1956. Dhanbad was specially declared as a separate district in the year 1956 on October 24. The “States Reorganization Commission gave the following recommendation.” The following decision was taken in the leadership of Satish Chandra, who was a renowned journalist at that time.

In the year 2006, the city of Dhanbad celebrated the golden jubilee of being an independent district. The city remained under Bihar from November 14, 2000. Dhanbad’s city became a part of Jharkhand after the state was created on November 15, 2000.

Jharkhand’s government could have been richer because of the huge number of coal mines present in Dhanbad. Jharkhand’s government couldn’t enjoy this opportunity because of the nuisance made by the coal mafias and the gang wars that took place in the state. Dhanbad and Wasseypur faced a lot of conflicts and were adversely affected by the gang wars. 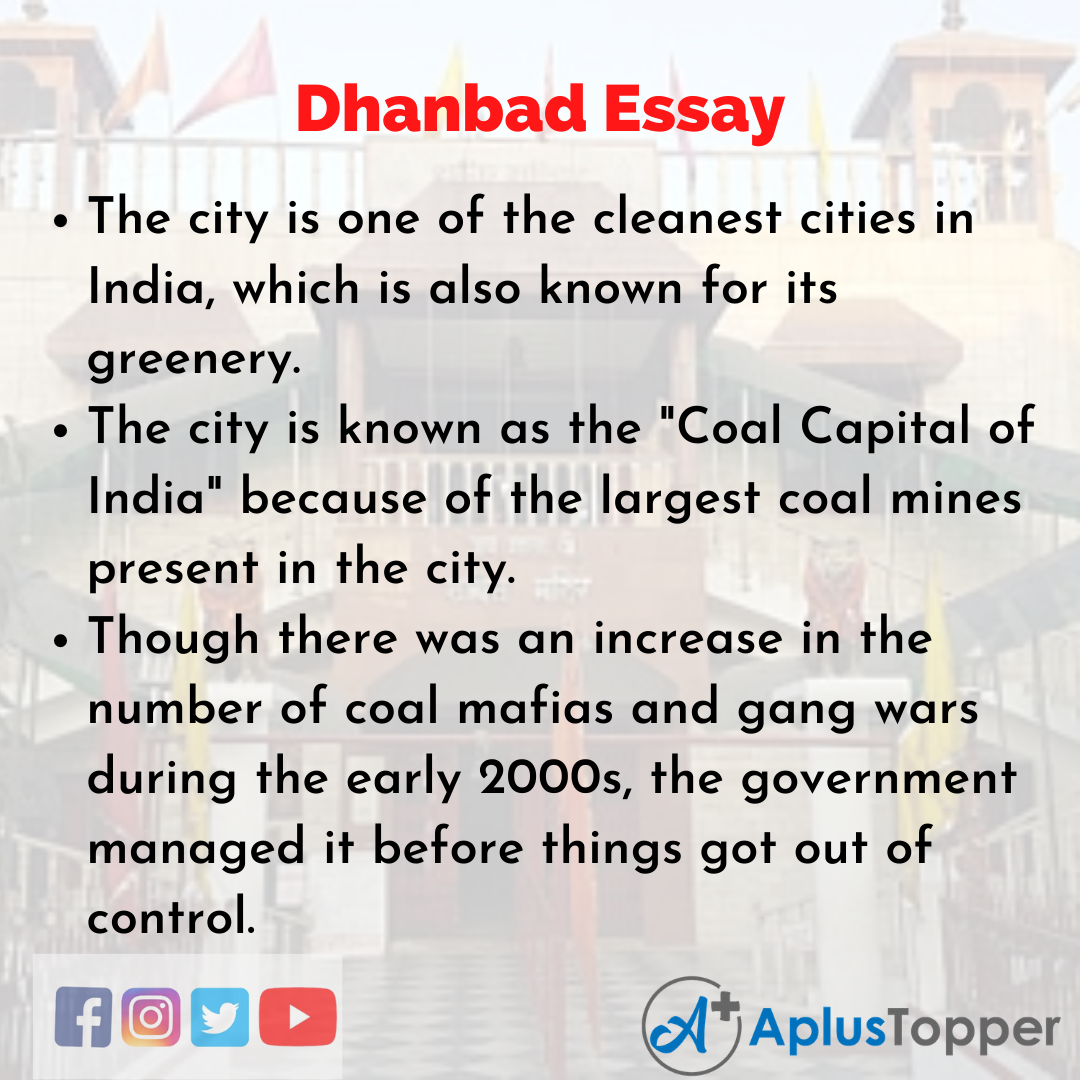 The urban establishment is rapidly taking place in Dhanbad in recent years. The city is considered the cleanest city in India, and it also ranks second when talked about population. The city is located in present-day Jharkhand. Dhanbad is known as the “Coal Capital of India.”

Dhanbad peoples languages are like Bengali, English, Urdu, Hindi, and Khortha. The city is situated at 236 meters above sea level. The climate of Dhanbad is tropical. The temperature of Dhanbad remains around 25.9 Celsius. Dhanbad faces about 47.4 inches of rainfall every year.

The Coal Capital of India has become popular due to its cleanliness and the establishment of urban territories. Dhanbad is also known for its food items. Dhanbad is known for its street foods and homemade delicacies like Til Barfi, Malpua, Dhuska, Litti Chokha, Rugra, Chilka Roti, Thekua, etc. There are a lot of other food items present in Dhanbad.

10 Lines on Dhanbad Essay in English

1. The city is one of the cleanest cities in India, which is also known for its greenery.
2. The city is known as the “Coal Capital of India” because of the largest coal mines present in the city.
3. The city is located in the eastern parts of Jharkhand.
4. Though there was an increase in the number of coal mafias and gang wars during the early 2000s, the government managed it before things got out of control.
5. In ancient times, the Mundari tribes had control of the city when it belonged to the Manbhum region.
6. The city belonged to the Bihar province while the East India Company had its rule.
7. The city is known for its remarkable food items, whether it be homemade delicacies and street food.
8. The languages spoken in Dhanbad are Bengali, English, Urdu, Hindi, and Khortha.
9. Dhanbad is also famous for tourist locations like Bhatinda Fall, Maithon Dam, Topchanchi lake, Panchet Dam, and many others.
10. The city has a tropical climate and faces 47.4 inches of rainfall annually. 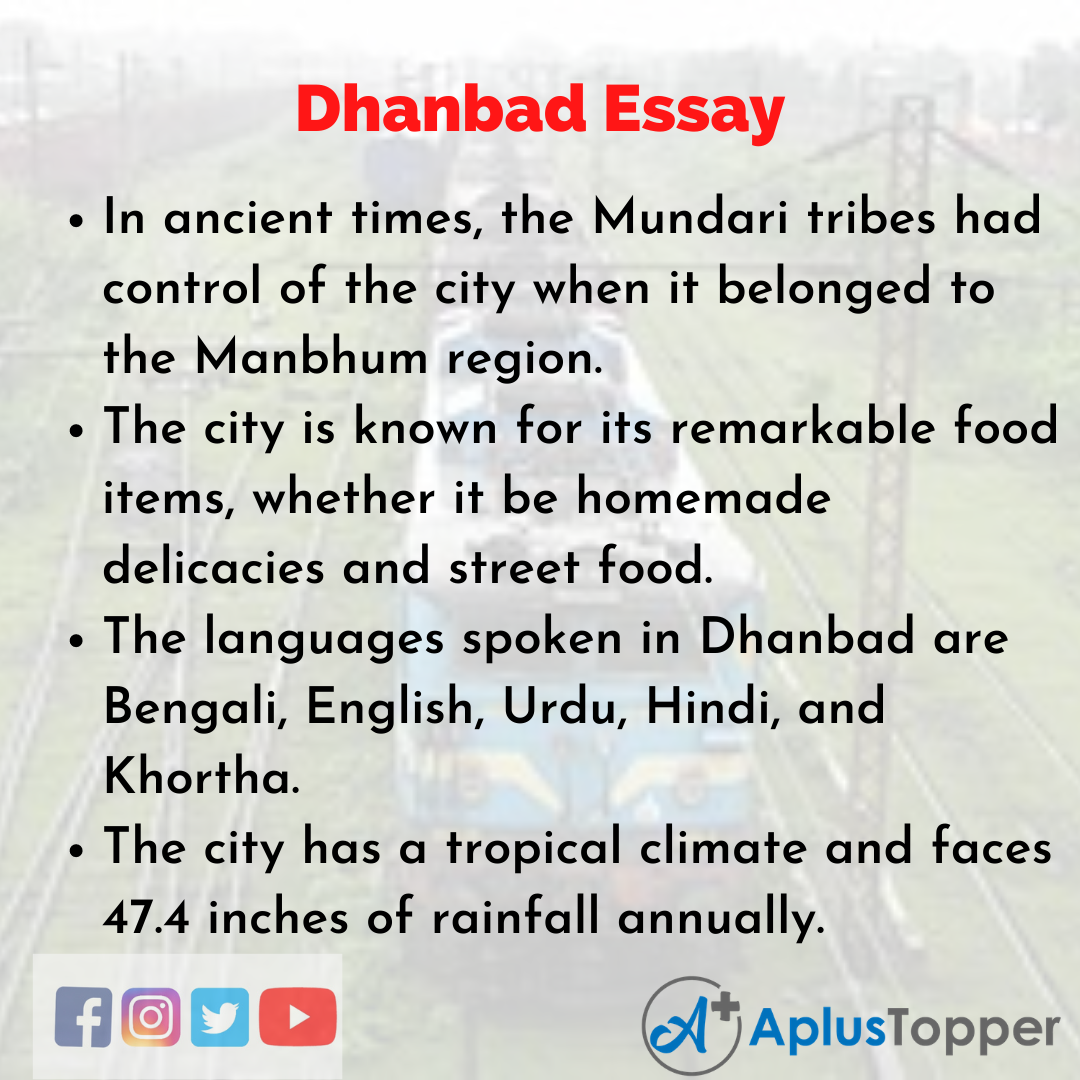 Question 1.
Why is Dhanbad known as the “Coal Capital of India”?

Answer:
The city is known as the “Coal Capital of India” due to the largest number of coal mines present in the city.

Question 2.
What are the famous dishes available in Dhanbad?

Question 3.
What are the famous tourist spots in Dhanbad?