Essay on Depletion of Ozone Layer: In another major atmospheric challenge that has been traced to human technology, the work of environmental scientists again has uncovered a serious problem for which there was no prior warning. Our knowledge of the workings of the atmosphere has been appallingly poor, and one consequence of that lack of understanding is the strong possibility that ultra-violet radiation will increase in intensity all over the Earth.

Long Essay on Depletion of Ozone Layer 500 Words in English

Below we have given a long essay on Importance of Depletion of Ozone Layer of 500 words is helpful for classes 7, 8, 9 and 10 and Competitive Exam Aspirants. This long essay on the topic is suitable for students of class 7 to class 10, and also for competitive exam aspirants.

Radiation from the sun includes ultra-violet (UV) radiation, along with the visible light. On penetrating the atmosphere and being absorbed by biological tissues, UV radiation damages protein and DNA molecules at the surface of all living things. This is what occurs when you get a sunburn. If the full amount of UV radiation falling on the stratosphere reached the Earth’s surface, it is doubtful that any life would survive. We are spared from the more damaging effects of the UV rays because most of the UV radiation (over 99%) is absorbed by ozone in the upper stratosphere. For this reason, stratospheric ozone is commonly referred to as the Ozone Shield or the Ozone Layer.

Ozone depletion refers to two related atmospheric events of significance, observed since the late 1970s. The first is the steady decline of total volume of ozone in stratosphere at the rate of 4% per decade. The second is a larger decrease in ozone over the polar regions, which is known as ozone hole.

In the autumn of 1985, some British atmospheric scientists working in Antarctica reported a gaping ‘hole’ (actually, a thinning of one area) in the stratospheric ozone layer of the South Pole. There is an area equal to the size of the United States, where ozone levels were 50% lower than normal. Scientists had assumed that the loss of ozone, if it occurred, would be slow, gradual and uniform over the whole planet. The ‘hole’ came as a surprise, and if it had occurred anywhere but over the South Pole, the UV damage would have been extensive.

News of the ozone ‘hole’ stimulated, enormous research effort. A unique set of conditions were found to be responsible for the ozone ‘hole’. In summer, gases such as nitrogen oxide and methane react with chlorine monoxide and chlorine to trap the chlorine, forming so-called chlorine reservoirs, preventing much ozone depletion.

High above the Earth is the stratosphere where a small number of ozone molecules shield all life from harmful ultra-violet radiation. Ozone, an unstable form of oxygen containing 3 oxygen atoms (O3), falls apart into an oxygen atom (O) and an oxygen molecule (O2) when it absorbs ultra-violet radiation. However, a fresh supply of ozone forms continually in the stratosphere, producing a delicate chemical balance in which a layer of less than 4.5 trillion kg of ozone, blankets the planet. That balance is threatened by chemicals called chlorofluorocarbons or CFCs, such as the fluoro carbon-11. They decompose and release chlorine atom, which cause ozone to break down. The difference is that each chlorine atom destroys as many as 100,000 ozone molecules faster than nature can replenish them. As a result, the ozone layer is thinning, forming a hole that lets damaging ultra-violet radiations reach the Earth.

The maximum decrease in ozone has occurred in the lower stratosphere. However, ozone hole is not measured in terms of concentrations of ozone. It is quantified by the reduction in total column ozone above a point on Earth’s surface. It is expressed in Dobson Units or DU. Ozone column is surveyed with the help of total ozone mapping spectrometer.

The reductions of upto 70% in ozone column observed in the spring of Southern Hemisphere over Antarctica are still continuing. In the 1990s, column ozone was 40-50% lower than pre-ozone hole valves. In the Arctic, the amount lost varies year-to-year. The greatest decline occurs during winter and spring, when the stratosphere is colder.

The depletion of ozone layer, allows more UV radiation to reach the Earth. It has been estimated that a 5% loss of ozone results in a 10% increase in UV radiation. Some of the important effects of ozone depletion are that in humans, the increased UV radiation increases the incidence of cataract, skin cancer and decline in the functioning of the immune system. Secondly, the elevated level of UV radiation damages nucleic acids in living organisms.

Thirdly, UV radiation inhibits photosynthesis in plants and photoplanktons which in turn affects the whole food chain. Fourthly, UV radiation will affect the crops in symbiotic association with cyanobacteria. Cyanobacteria live in the roots of some crops, like rice and help in the retention of nitrogen. Cyanobacteria are sensitive to UV radiation, and plants too have limited adaptability to increased UV-B levels. Fifthly, like in humans, in other organisms too, UV radiations cause severe sun-burns. The epidermal damage was discovered in the whales of the Gulf of California in 2010.

Ozone losses have not been confined to Earth’s polar regions, although they are most Prominent there. A worldwide network of ozone-measuring stations send data to the World Ozone Data Centre in Toronto, Canada. Reports from the centre reveal a rate of loss of 2-4% per decade since 1979 over mid-latitudes in the Northern Hemisphere. Ozone loss was expected to start showing in the year 2001, when the chlorine and bromine concentrations in the stratosphere started to decline as a consequence of the international agreements that have been forged.

However, according to a report published in 2010, the ozone holes, high in the stratosphere over each of the polar regions, have stopped growing due to the phase out of nearly 100 ozone-depleting substances once used in products like refrigerators and spray cans, as per the study by United Nations scientists. It was noticed that the ozone hole that forms each year over Antarctica was slightly smaller in 201 3. The world is moving towards phasing out of hydrofluorocarbons (HFCs), however, India has said that it first needs to find environment friendly alternatives, then make the move. 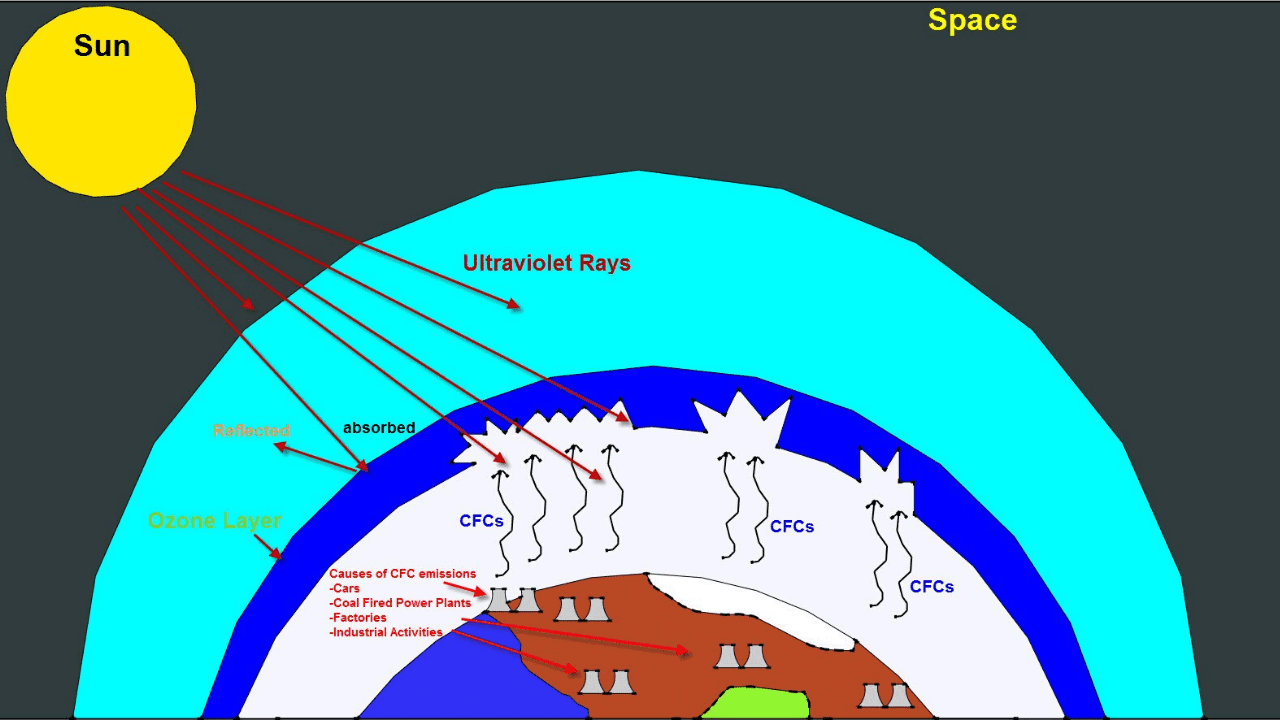 Short Essay on Depletion of Ozone Layer 200 Words in English

Below we have given a short essay on Depletion of Ozone Layer is for Classes 1, 2, 3, 4, 5 and 6. This short essay on the topic is suitable for students of class 6 and below.

The ozone story is a remarkable episode in the human history. From the first warnings in 1974 that something might be amiss in the stratosphere because of a particularly inert and useful industrial chemical, through the developments of Montreal Protocol the final steps of CFCs phase out that are still being undertaken, the world has shown that it can respond collectively to a clearly perceived global threat. The scientific community has played a crucial role in this episode, first alerting the world and then plunging into intense research programmes to ascertain the validity of the threat and its remedial actions.

Stopping the rapid decline in ozone layer is as much the responsibility of the civil society as it is of governments and scientists. We can see to it that we limit private vehicle travelling, use eco-friendly cleaning products and avoid chemical pesticides and weedicides.

Ozone layer is the protective shield of the Earth. We have to ensure that the hole in this ‘shield’ doesn’t get bigger, otherwise all life on Earth would perish owing to the wrath of the sun, in the form of UV rays.