Christmas Essay: Essay on Christmas is an important topic for students to learn. Christmas is one of the biggest annual festivals in the world, with billions partaking in its cultural celebrations. The festival commemorates the birth of Jesus Christ in the month of December; interestingly, historical records nor the Bible mentions the exact day Jesus was born.

The earliest records of Christmas celebrations can be traced back to the time of Roman Emperor Constantine, on December 25th, 336 AD. Today, Christmas is celebrated at the same time around the world, whether they are Christians or not. Celebrations include spending time with family and friends, decorating houses and exchanging gifts. Offices and companies usually give employees time off to celebrate Christmas with their families, children spend the day playing with their new gifts or toys. Most people also adorn their houses with Christmas trees, with lights, decorations and tinsel. Read on to explore more about Christmas and the reason it is celebrated worldwide.

Introduction on Essay On Christmas

Christmas is a festival celebrated around the world by Christians and even non-Christians. The festival commemorates the birth of Jesus Christ, who would go on to establish Christianity. It is also one of the biggest annual festivals in the world, with billions of people taking part in its celebrations. Time is also spent with family and friends, exchanging gifts and having a blast.

When was Jesus Christ Born?

Christmas Date and Its Origin

Many believe that the birth of Christ did not happen on Year 1, but somewhere between 2 BC and 7 BC. The first-ever recorded evidence of Christmas celebrations can be traced all the way to 336 AD, during the reign of the Roman Emperor Constantine. Constantine was the very first Roman Emperor to adopt Christianity, and hence, celebrated the birth of Christ on December 25th. However, there are more theories that explain why we celebrate Christmas on 25th.

An ancient Christian tradition marked March 25th as the day when Mary was told that she would give birth to a very special baby, this event was called the Annunciation in Christian literature. Nine months after March 25th was December 25th, which is when Jesus would have been born.

How “Old Christmas” is Celebrated?

The Meaning Behind the Term “Christmas”

The name “Christmas” is actually a shortened form of the word “Christ’s Mass” or the Mass of Jesus Christ. This is in turn derived from the Old English word – “Crites-messe”, which literally translates to Christ’s Mass. The term “Mass” is a service used by Christians to indicate the death and the subsequent resurrection of Jesus. Alternatively, Mass was also called a Eucharist or Communion.

Interestingly, people also use the term “Xmas” in place of Christmas. The Greek name of Christ is “Χριστός (Christos), and it starts with the Greek letter “X” or Chi (pronounced as “kai”). Hence, people started abbreviating “Christ” with “X”, thereby calling it “Xmas”. 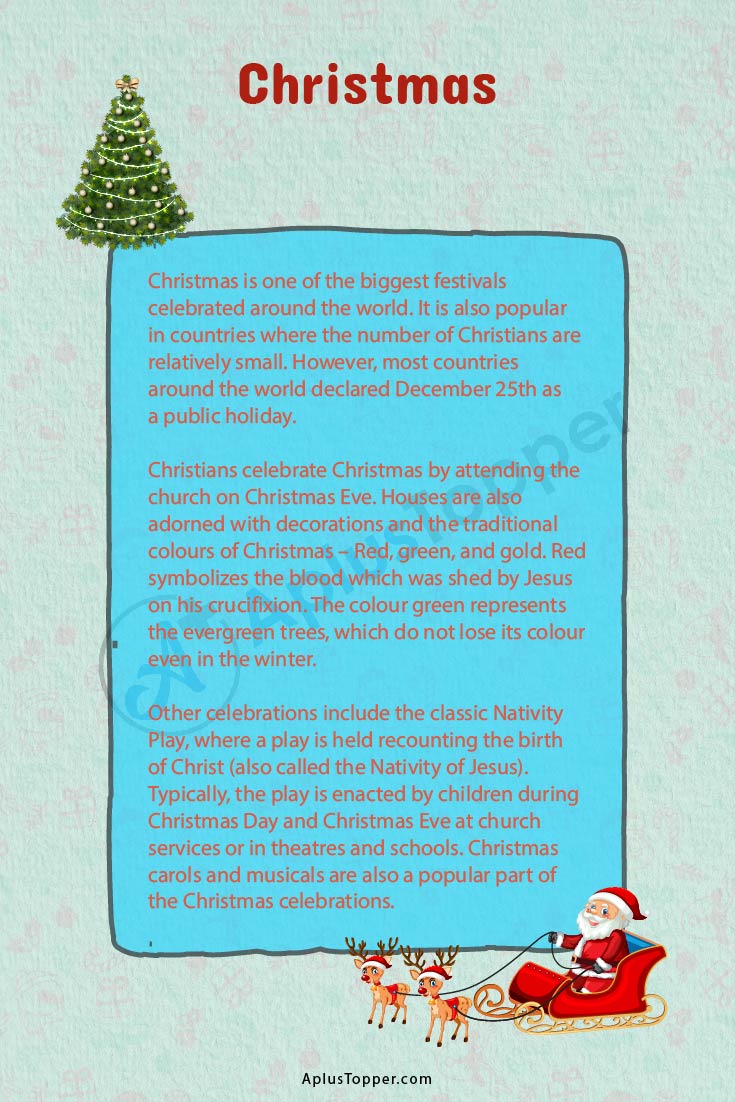 Essay on Christmas Celebrations and Traditions

Christmas is one of the biggest festivals celebrated around the world. It is also popular in countries where the number of Christians are relatively small. However, most countries around the world declared December 25th as a public holiday.

Christians celebrate Christmas by attending the church on Christmas Eve. Houses are also adorned with decorations and the traditional colours of Christmas – Red, green, and gold. Red symbolizes the blood which was shed by Jesus on his crucifixion. The colour green represents the evergreen trees, which do not lose its colour even in the winter. The colour green also symbolizes eternal life. The colour gold symbolizes royalty, as it was one of the three gifts given by the Magi (priests). Another iconic item of decoration is the Christmas tree, which is usually adorned with tinsel, bells and a star atop the tree. The star on the tree top represents the Star of Bethlehem.

Other celebrations include the classic Nativity Play, where a play is held recounting the birth of Christ (also called the Nativity of Jesus). Typically, the play is enacted by children during Christmas Day and Christmas Eve at church services or in theatres and schools. Christmas carols and musicals are also a popular part of the Christmas celebrations.

Christmas is one of the biggest festivals in the world and is celebrated by billions, both Christians and non-Christians. It signifies the birth of Jesus Christ, the central iconic figure of Christianity. People usually spend time with their family and close friends, showcasing the true spirit of Christmas.

Question 1.
What is Christmas all about?

Answer:
Christmas is a festival celebrated every year to commemorate the birth of Jesus Christ.

Question 2.
How do you write a Christmas essay?

Answer:
An essay on Christmas must provide a brief overview of the festival and the reasons why we celebrate it. The essay must also elaborate on the ways that people celebrate this festival.

Question 3.
Why is Christmas celebrated?

Answer:
Christmas is celebrated to mark the birth of Jesus Christ.

Question 4.
What is Christmas in simple words?

Answer:
Christmas is a festival and a public holiday that celebrates the birth of Jesus Christ.

Question 5.
Who made Christmas?

Answer:
The origins of Christmas celebrations have many theories. The most prominent one is about the Roman Emperor Constantine, who was the very first Christian Roman Emperor- he celebrated this festival on 25th December, 336 AD and the tradition may have followed for future Roman emperors.