Essay on Christianity: Christianity has become the most popular religion, with over 2 billion followers. When it has started, there were only a few people who practised this religion, but gradually it has become one of the greatest and the successful religion of all the time. It is considered as an Abrahamic means people who worship God of Abraham.

It is followed on the life and the teachings of Jesus, which are considered as the Son of God. It Is the world’s largest with around 2.4 billion followers in total as calculated in 2020. Jesus Christ-followers are known as Christians, and Jesus are referred to as the Christ here.

For reference, we provide students and children with essay samples on a long essay of 500 words and a short essay of 150 words on the topic “Christianity”.

West Christianity remains the dominant religion as it occupies almost 70%, which are identified as Christians. Christianity and its culture are growing at a very rapid growth in Asia and Africa. Christians are often in some regions of East Asia, South Asia, North Asia and Middle east. They believe that God has sent Jesus as the messenger to save the world. They are monotheistic that is they believe in that there is one God and believe that it is consists of 3 parts that is the father which is God, the son of God and the spirit which is considered holy.

Christians believe that Jesus will return and that returning will be referred to as the resurrection of Jesus in the world. The Holy Bible, which guides Christians in how to live their life, have several pictures and Christians has told about the teachings of Jesus. And the cross is considered as the slogan of Christianity. The majority of Christians and news follow the old testament of the Bible, and also many other Christians follow the new testament. The Bible of Christian is a set of 66 books written by different authors, and the old testament refers to Judaism which includes the history of Jews, written specific laws and also in this the detailed lives of prophets are mentioned. The new testament was crafted and written after the death of Jesus.

The first four books are classified as and given the names of John, Luke, Mark and Matthew. Parables meaning short tales, including hidden messages, Jesus use this thing to teach people how to conduct their lives. Sone of the Jesus teachings includes that love you God, Some of the main principles in his teachings was to love God, love your enemies, don’t judge others, Forgive others, love your neighbour as yourself, ask for forgiveness from God for your sins and be a good human.

In his very popular speeches which are known as Sermon on the Mount, he explained many regulation and instructions for his followers. Many sects of Christianity has very distinctive opinions and worship in many different ways, but the prime thing for all the Christians are the teachings of Jesus. 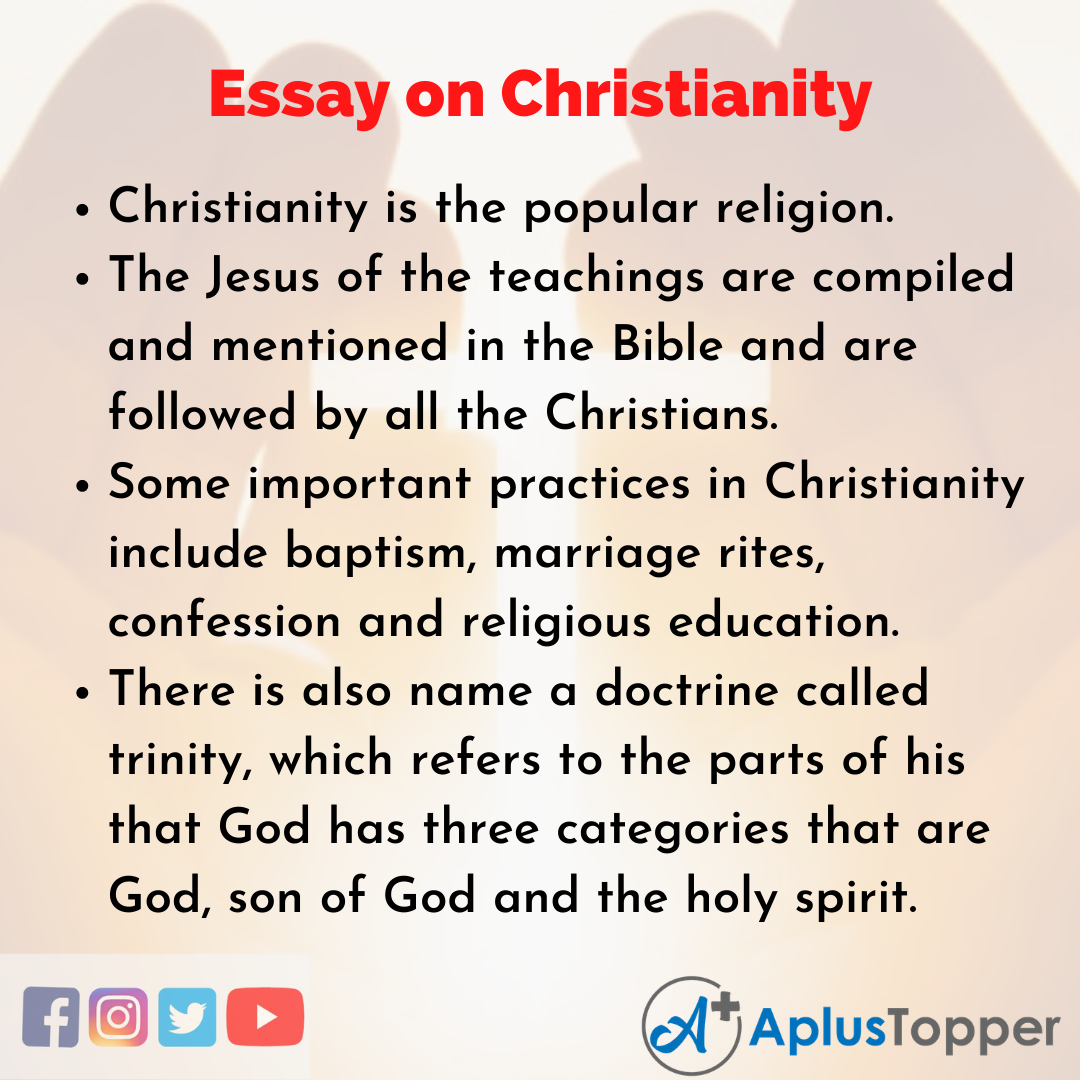 Jesus Christ was born in Bethlehem and was the founder of Christianity. The main scripture which was crafted is known as the Bible. The main communities in Christians are divided into three types that are Catholics, orthodox, protestants. The most prestigious and sacred symbol of Christians is the cross.

This religion is spread all over the world. Jesus has built this religion to give a path to the wanderers and people who are in search of peace and contentment. Giving charity to the needy ones is considered a special deed by humans, and everyone should do this according to the teachings of Jesus.

10 Lines on Christianity in English 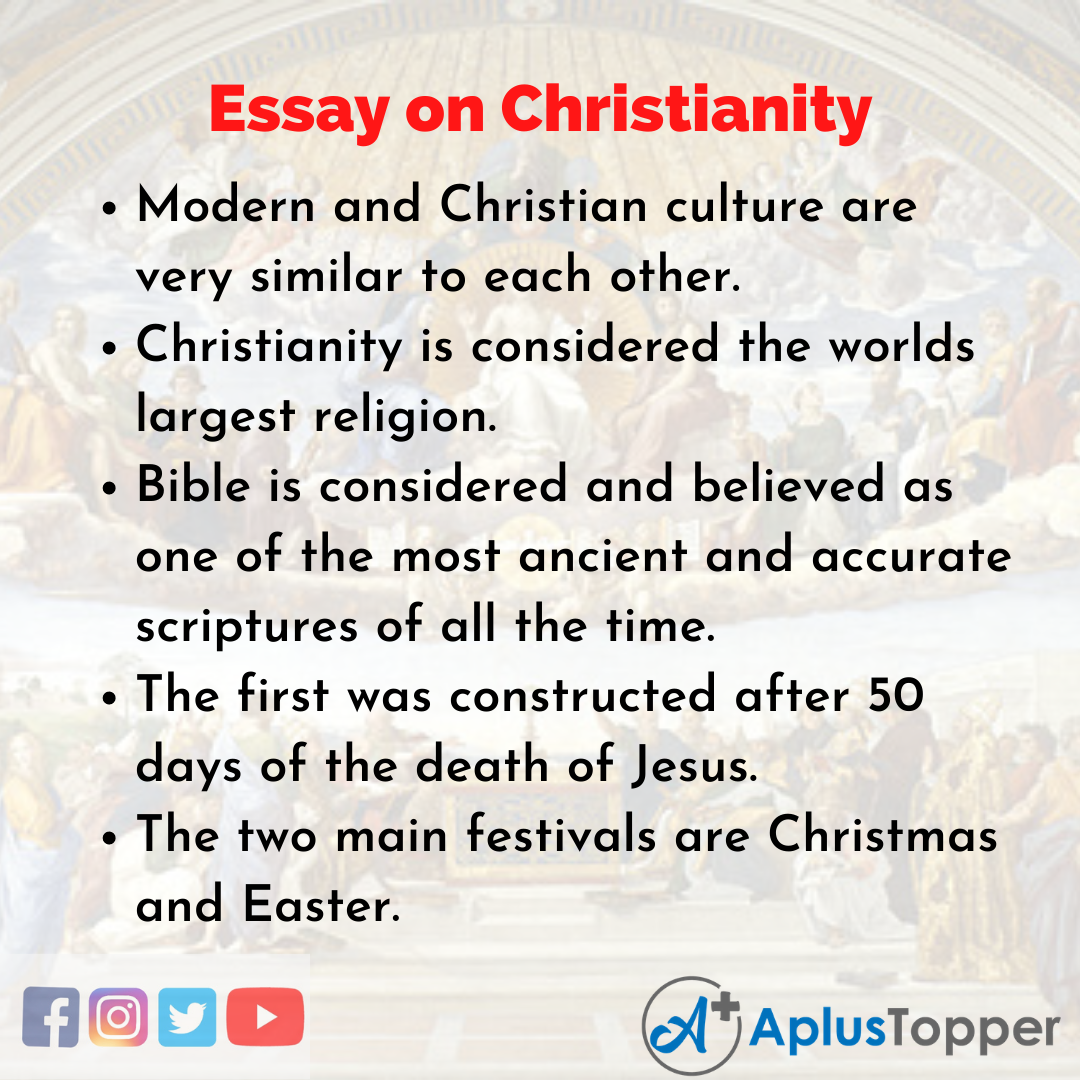 Question 1.
Whose teachings are followed by Christians?

Question 2.
How many followers are there of Jesus Christ?

Answer:
There are 2.4 billion followers of Jesus Christ which are spread all over the world.

Question 3.
Which thing is considered to be the most sacred in Christianity?

Answer:
The cross has considered being the most sacred thing in Christianity.