Essay on Chennai: In the earlier times, Chennai used to be known as Madras. It is considered as the capital of Tamil Nadu in the southern side of India. It is situated on Bay of Bengal’s Coromandel coast. This city is quite famous due to its diverse and dynamic culture and tradition.

It is included as one of the four metropolitan siblings of the country. It has a cultural and historical background that is both rich and vast. It thoroughly mixes up with the metropolis lifestyle perfectly. Besides, it is very famous for its South-Indian culture, museums from the British Era, monuments, temples, and so on.

We are providing students with essay samples on a long essay of 500 words and a short essay of 150 words on the topic Chennai for reference.

Chennai is considered to be one of the biggest cities throughout the south side of the country. It is termed as the capital of Tamil Nadu. The city is widely popular for its historical background. It has been established first by the Raja of Chandragiri.

In Chennai, you can see a combination of several communities across the country. This city welcomes people with any race, caste or religion with utmost warmth and politeness. Thus, visiting Chennai can be a pleasant experience for you.

Several people still prefer sarees over modern clothes in this city. Besides, one can also notice people with traditional dhotis more rather than modern-day blazers.

There are numerous structures and monuments, including the government buildings, railway stations, complexes, churches, and high courts that were developed back in the British Era. Thus, the streets of Chennai still give out a feeling of the British touch in them.

Marina Beach is one of the largest seashores across the globe which is located in Chennai. However, the sea is not suitable for swimming due to the presence of sharks in this area.

The people living here belong to different religions and cultures that co-exist in harmony. It is also the home to several famous holy temples including the Kapaleseshwara temple, Sri Ramanaadheswarar Temple, Shri Ashtalakshmi Temple, and so on. These are some of the most elegant architectural pieces present in Chennai.

Chennai is also widely known for its transportation services including the city busses, rickshaws, etc. Many trains link all the crucial parts of the towns. The Chennai metro rail project is on the last stage of completion.

The city is also popularly referred to as the Gateway to the South. This is because it is well-known for its culture, rich history, beach, theatres, parks, monuments, temples, restaurants, shopping malls, and so on.

The people in this city are famous for their skills in several arts, starting from the classical Bharathanatiyam to the modern-day salsa, contemporary, hip hop, etc.

Chennai is also highly popular for the availability of different types of cuisines. In Chennai, you have the choice to choose from any cuisine may it be South Indian or Chinese. However, it is highly known for mouth-watering foods like Mullitgatawny Soup, Sundal, Nethili Fry, Masala Dosa, Biryani, Idli, and so on.

This city has a list of beautiful museums that are considered to be a must-visit place for anyone considering a tour to Chennai. Some of these famous museums include the Egmore government museum, fort museum, Vivekananda house, Adyar library and research centre, etc. Due to these unique and rare monuments, the number of tourists has been increasing across the city constantly. 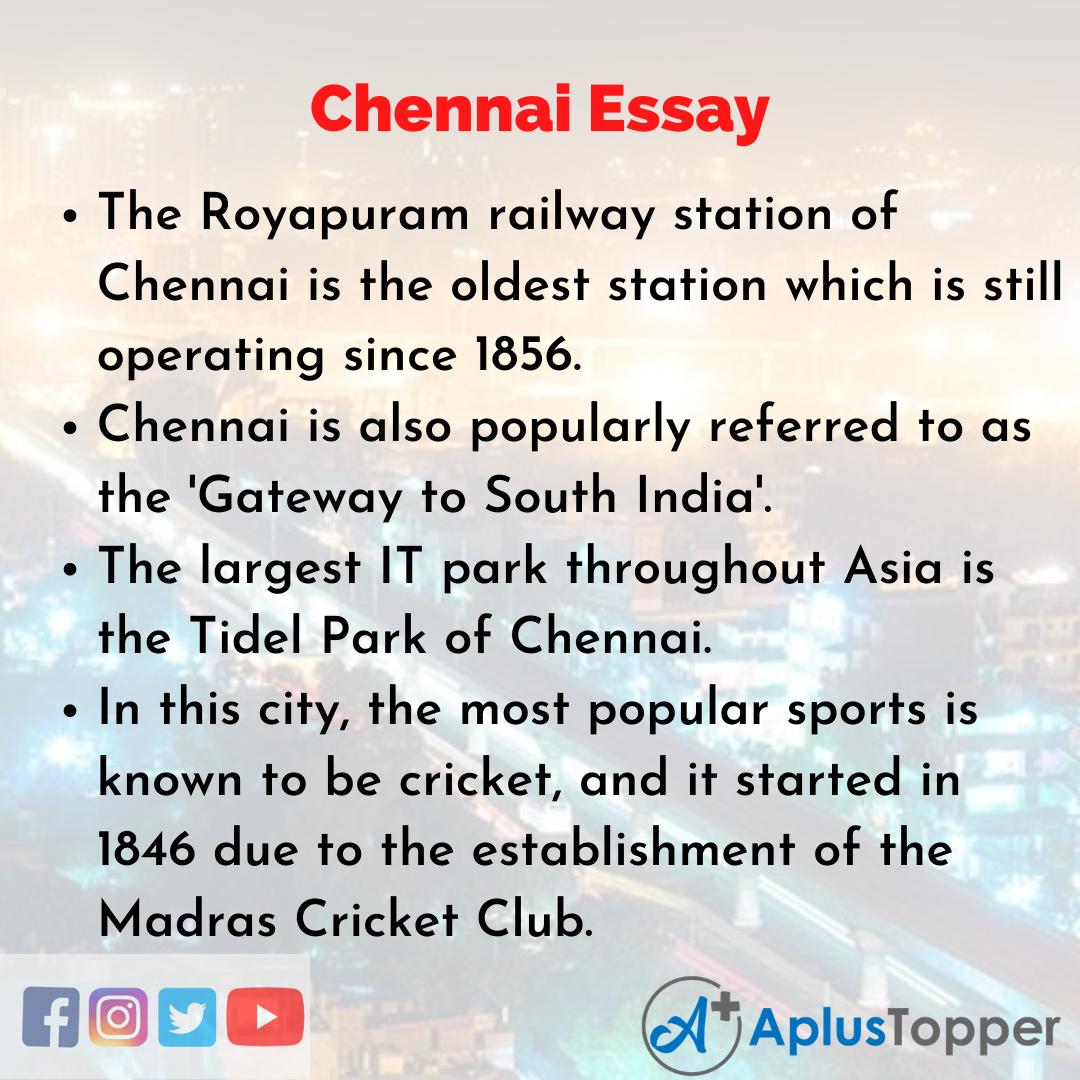 Chennai is the capital city of Tamil Nadu. Earlier, its name was Madras. This city has a population of 7.5 million (2005) and thus, comes at 6th number when it comes to India’s most populated cities. Chennai is considered the Gateway for South India.

It has exquisite art scenes and fascinating local culture that makes it a popular destination for tourists. This city is also well-known for being in the list of fastest-growing cities of the world and is also ranked thirteenth for being the cleanest city in India.

The official language of Chennai is Tamil. The locals in Chennai mostly speak Tamil. Thus, getting to know some of the general words of Tamil is helpful to travel in Chennai. Still, the English language is suitable for tourists. After Tamil, English is the second language used in Chennai. Due to this reason, all the major signboards are written in English as well as Tamil.

10 Lines on Chennai Essay in English

1. The Royapuram railway station of Chennai is the oldest station which is still operating since 1856.
2. Chennai is also popularly referred to as the ‘Gateway to South India’.
3. The largest IT park throughout Asia is the Tidel Park of Chennai.
4.In this city, the most popular sports is known to be cricket, and it started in 1846 due to the establishment of the Madras Cricket Club.
5. The first and the largest public zoo across India is the Vandalur Zoo established back in 1855 in Chennai.
6. Chennai is well-known for its classical dance Bharatnatyam.
7. It is the home of the top foreign banks like the Citibank, Bank of America, etc.
8. The largest library throughout Asia is the Anna Centenary Library in Chennai.
9. Chennai has one of the oldest medical centres in India, i.e. the Cancer Institute formed in 1920.
10. The top bus terminal in Asia is the Chennai Mofuss Bus Terminus. 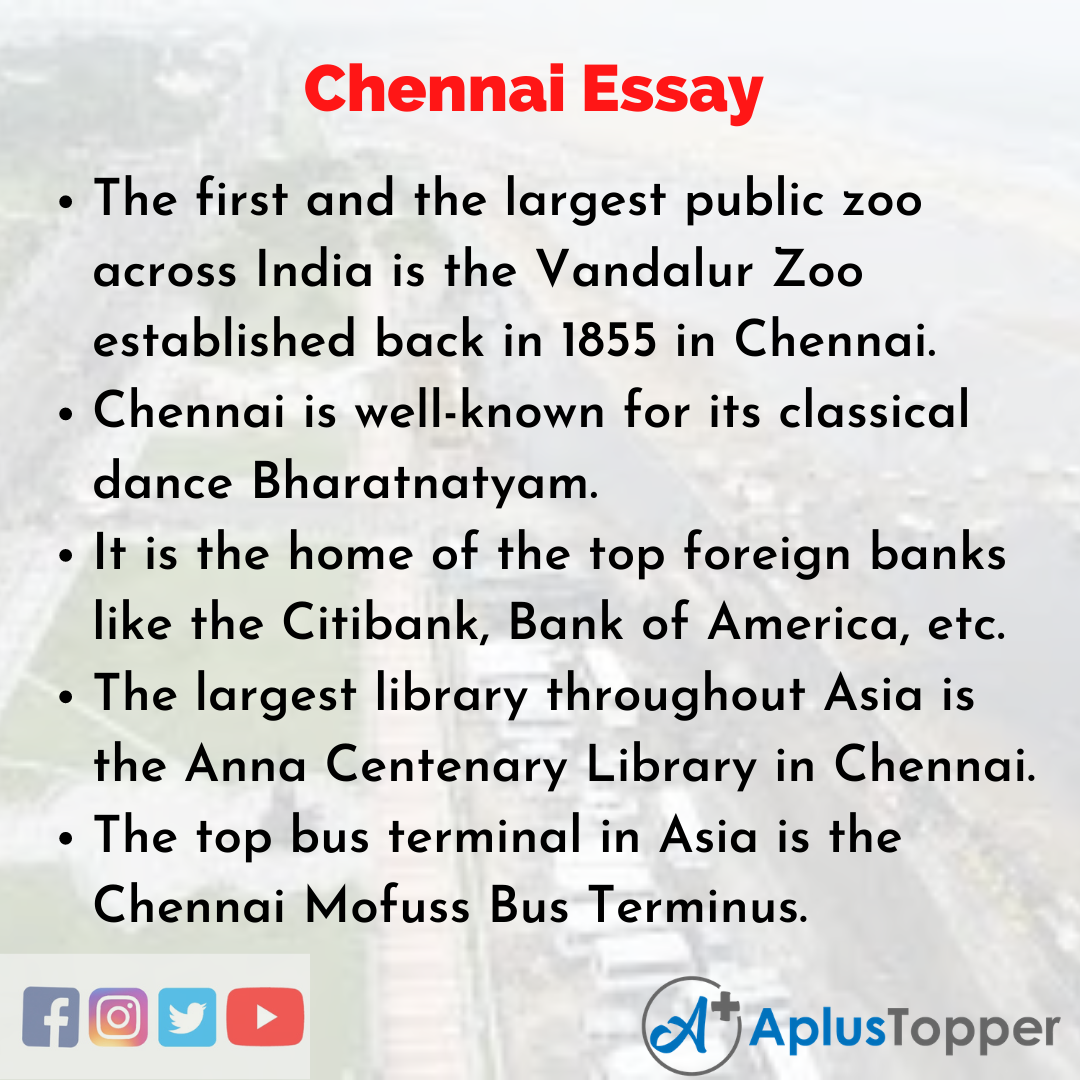 Question 1.
What are the things popular about Chennai?

Answer:
Chennai is quite famous for its rare and diverse culture.

Question 2.
What are the types of food popular in Chennai?

Answer:
The dishes like Masala Dosa, Murukku Sandwich, Biryani, and Mulligatawny soup are very famous in this city.

Question 3.
What did Chennai use to be referred to as in the earlier times?

Answer:
Chennai was referred to as Madras in the past.

Question 4.
Which months are considered a pleasant time to visit Chennai?

Answer:
You should visit Chennai between November to February.