Essay on Cashless India: The dream of digital India’s first step is a cashless India. With this dream, on the evening of 8th November 2016 at sharp 8 pm, the Prime Minister of India, Narendra Damodardas Modi announced the demonetisation of Rs. 500 and Rs. 1000 notes in the country. This historic decision was based on various reasons, one of which was a dream of cashless India.

In this essay on cashless India, we will be talking about what it means to be cashless, the various alternatives for our monetary system and what are the advantages and disadvantage for a country which has fully gone digital or cashless in its economy.

The extended essay on cashless India is helpful to students of classes 6,7,8,9 and 10.

The traditional form of monetary transactions with hard physical cash exchanged between people will almost become almost redundant. And this theory has been given an enormous amount of push by the Covid-19 pandemic, given the health concerns in exchanging physical cash. There are plenty of benefits to going cashless. In this essay on cashless India, we shall be talking about both the advantages as well as disadvantages of a cashless India.

First of all, what does a cashless economy mean?

What is the meaning of a Cashless Economy?

A cashless economy means the liquidity in the system is exchanged between two parties through either plastic currency (ATM debit and credit cards) or through digital currency (online payments). With the advent of blockchain technology, bitcoins have given a whole new meaning for a cashless economy. The concept of bitcoin talks about a decentralized system of finance, but that is not the point of discussing in this particular essay on cashless India. Hence, let us come back to the crux of this essay on cashless India, which are the pros and cons of the digital payment system. 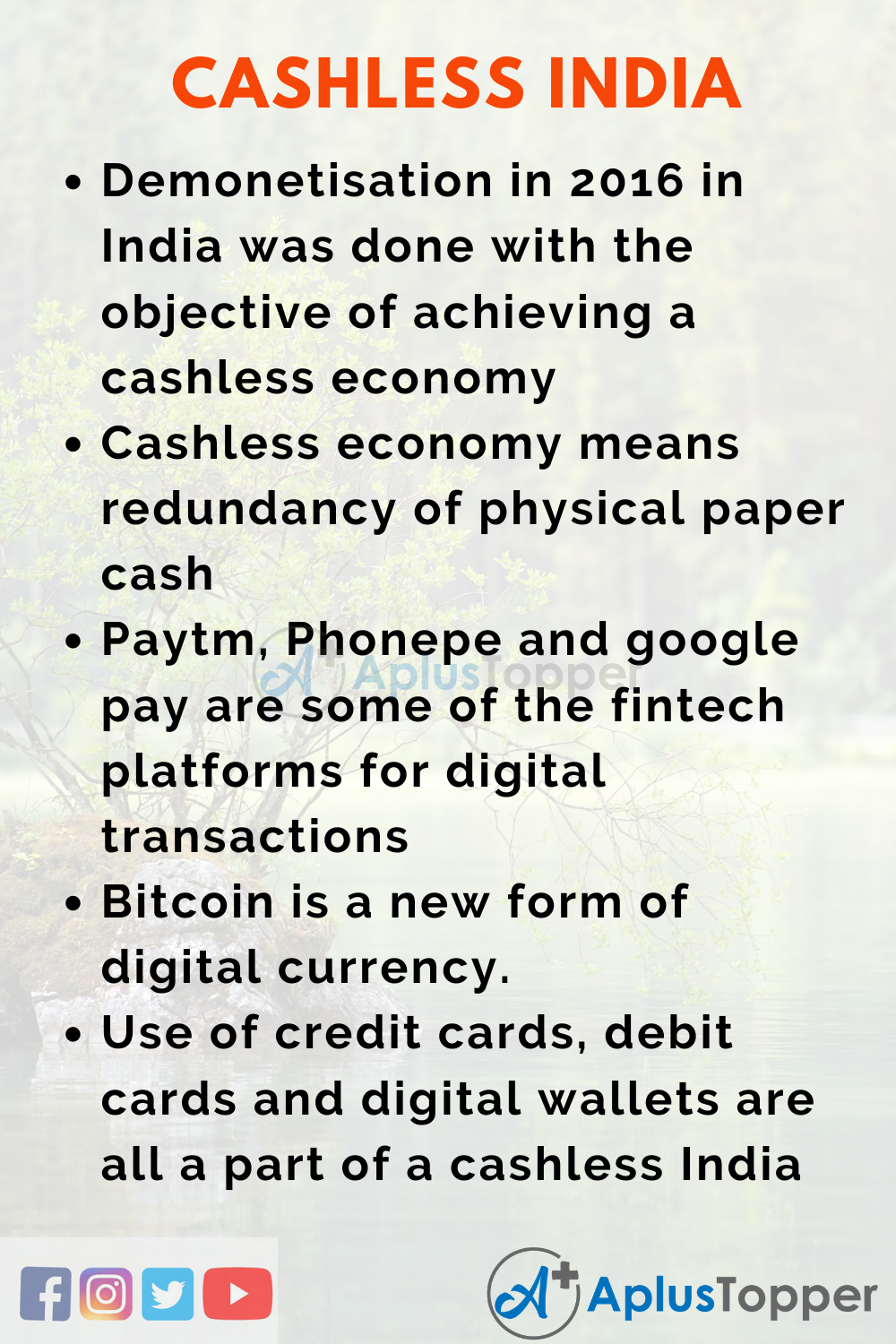 The brief essay on cashless India is helpful to students of classes 1,2,3,4,5 and 6.

Cashless economy is the economy in which physical paper cash will become redundant and all the citizens use smartphones and cards to pay for their transactions. But achieving a fully cashless economy needs a lot of up-gradation of digital infrastructure as well as conducting educational and awareness campaigns for people across the country, especially in rural and economically backward areas.

In the view of making India a cashless economy, Prime Minister Narendra Modi had announced demonetisation of Rs. 500 and Rs. 1000  denomination notes from the country in the year 2016. This led to an increase in online cash transaction in the country by 10 folds. But still, India is not a truly cashless economy. Business across the spectrum increasingly adopted cashless transactions in the view of the changing trends in the country, as a result of which many unicorn startups were given birth to, such as Paytm and phonepe in India.

While there are plenty of benefits for a cashless economy like the ease of transaction, curbing corruption and black money, there are many down comings as well. Some of which is lack of trust in digital transactions, hacking and theft frauds. The government should address these problems immediately with proper resources to make India a truly digital and cashless economy.

10 Lines on Essay on Cashless India 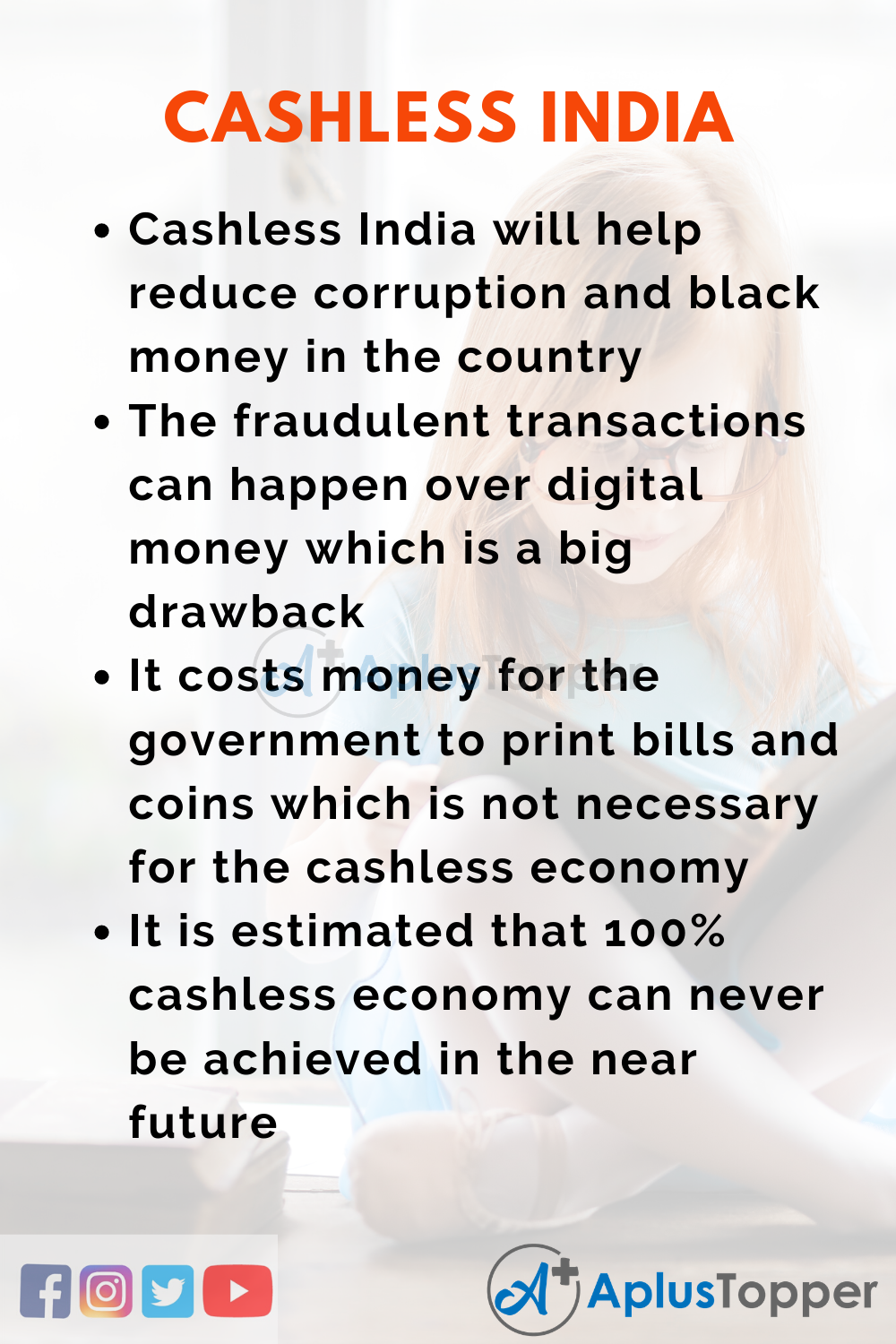 FAQ’s on Essay on Cashless India

Question 1.
What are the types of cashless transactions in India?

Answer:
Cheques, demand drafts, UPI, debit and credit cards, NEFT, RTGS and IMPS are some of the cashless transactions in India

Question 2.
Which country is completely cashless?

Answer:
Sweden has achieved near cashless economy in the world

Answer:
Yes. A decentralized currency like bitcoin is a great form of currency to improve transparency

Question 4.
What are the different digital currencies in the world?

Answer:
Bitcoin, Litecoin, Ehterim are some of the digital currencies in existence as of 2020