Essay on Basketball: Basketball is a crew sport, where there are two teams of five players each. The game is also commonly referred to as hoops. The teams face each other in a court, which is rectangular.

The main objective of the game is to score by shooting the ball to the opponent’s basket or hoop. The hoops are mounted on a ten feet high pole. Each goal is worth two points; three points if scored from behind the three-point line.

We are providing students with essay samples on an extended essay of 500 words and a short piece of 150 words on the topic “Basketball” for reference.

The game of basketball was first played almost 128 years ago. The date of the first-ever basketball match was 21st December 1891. The beginning of a basketball era came in Massachusetts, the United States by the hands of an American gym teacher. The game then took its route and spread across Canada and gradually in many other parts of the world. In present times, basketball is a sport that is played internationally.

It is a fun sport that is played across various courts. The professional court is, however, of a fixed size. It usually measures 90 feet by 50 feet and a wooden floor. Each team gets two points for scoring a goal. In case of a foul, a penalty is given to the other team, and it comes as free throws. The game is not gendered specific and is played by both men and women.

There is a referee in the basketball matches, who begins the game. He tosses the ball in the court in the presence of one player from each team. Whoever gets his hands on the ball first has an advantage. He passes on the ball to his teammates, and the game begins. The team which can score maximum points till the end are declared the winner.

In case of a draw in any game, there is allotment of extra time. the game involves a lot of dribbling and running, where the teammates pass the ball among themselves. No player can move without dribbling. If a player moves with the ball and fails to dribble, it is considered to be a foul, and the opponents get an extra chance. The game of basketball requires plenty of physical activity. It is a game that makes proper use of technique and positions. Each player has to dribble, shoot or pass correctly. The positioning of the players has to be perfect so that there is not a single missed opportunity.

The players who are playing in the defensive has the full scope to steal the ball from their opponents. They can jump to lock exits too. It is usually the tallest player who gets to play in the central position. The other posts in which the players are placed are power forward and small forward. It is usually the shorter members who take this place. There are also positions for a point guard and shooting guards.

Dr James Naismith, the inventor of this game, meant to keep the sport indoors. But later on, basketball popularised as an excellent outdoor game and is played today in all major sports events, like the Olympics and the Paralympics. The International Basketball Federation or FIBA is the most superior basketball association. In the earliest matches of the game, there were not specific balls that were meant for the game itself. These games were played with simple soccer balls. The dribbling time was also significantly less. Since those early games, a lot has changed, but its fast pace and entertainment has remained constant. 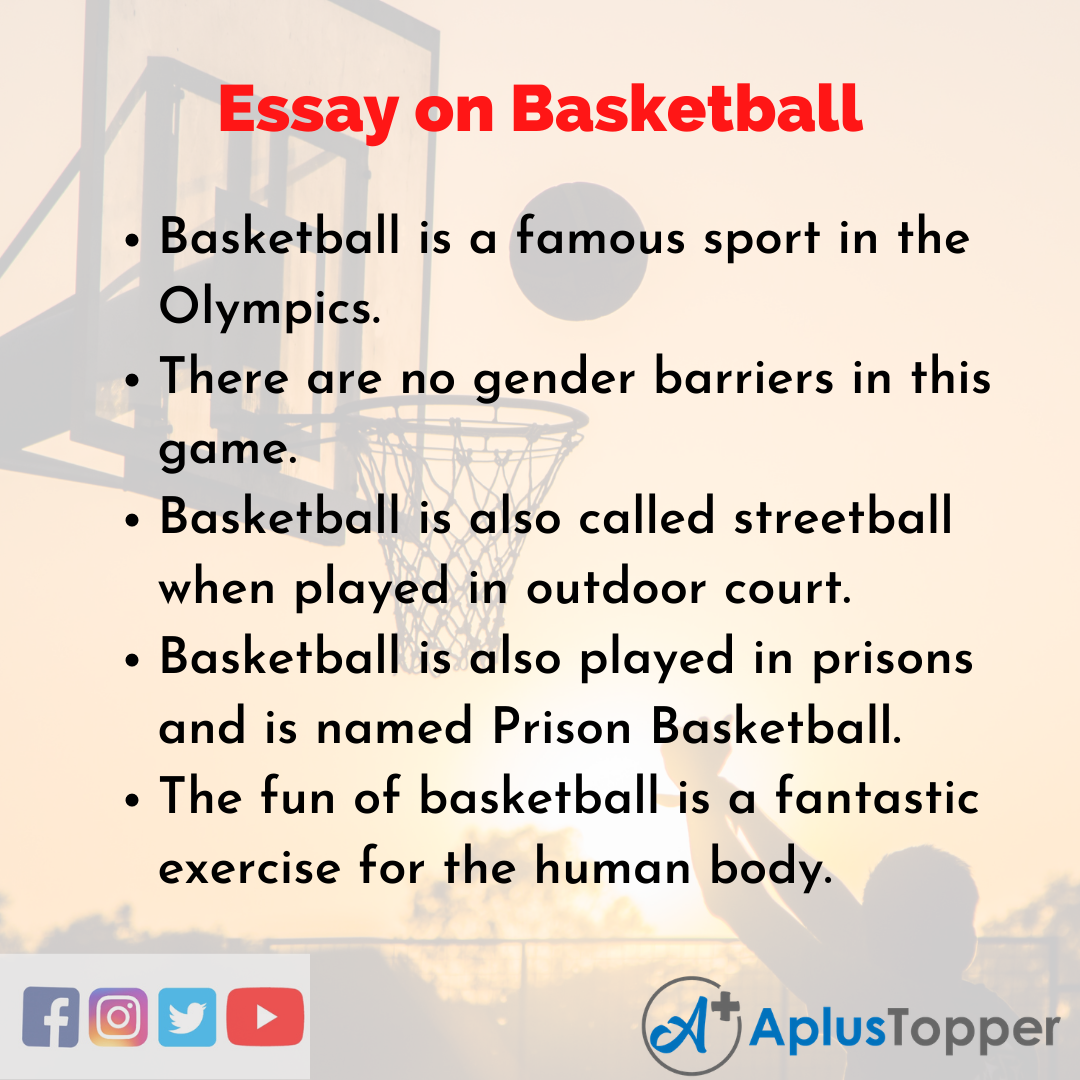 In the team sport, basketball, the five players in each team try to score goals in the hoops of the opposite team. The rings are of fixed proportions and measure 18 inches in diameter. The players can advance to the baskets of the opposing team by running or dribbling. Every player is expected to behave in the proper conduct of sportsmanship, and any behaviour other than this attracts a penalty.

The game of basketball came in the year 1891, in Springfield, Massachusetts. Many other sports formed an inspiration for basketball. It has features of soccer and rugby. There are several positions in which players can play; there is a power forward, centre, small forward, point guard, and shooting guard. Each team comes up with a strategy called a trap, and the most common of all strategies are man-to-man defence. Several types of shots are tried by the players, like jump shot, set shot, lay-up and likewise. Slam dunk is another accurate shot.

10 Lines on Basketball in English 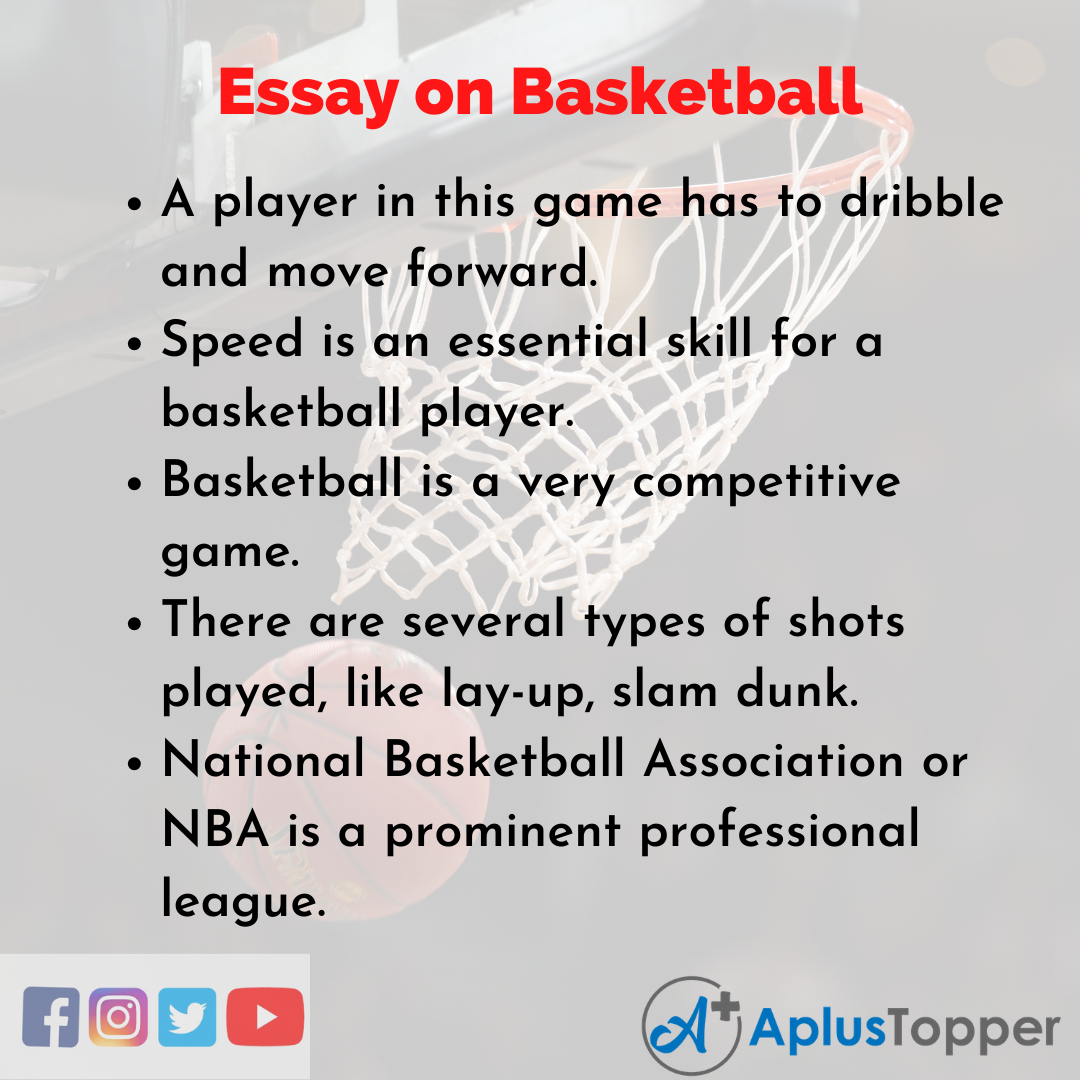 Question 1.
Who are some eminent basketball players?

Question 2.
What are the measurements of the court and ball?

Answer:
The ball used for matches is usually 30 inches in circumference. The court has a measurement of 94 feet

Question 3.
How many points are scored for a basket?

Answer:
One basket is worth two points. Three points are also scored for some baskets if the ball is scored from beyond the three-pointer line.