Essay on Bank: Banks are financial institutions that provide a loan or save customer’s money. The term ‘Bank’ is derived from the word ‘Banc’ or ‘Banque,’ which means a bench upon which the ancient day financiers would display their coins or transact their business in the market space.

Banks are an elemental part of society. Banks are located in different parts of the country and deal directly with the general public. They provide multiple services on customer-based requirements and provide lockers, ATM Services, money transfer, loans for houses and businesses, and several other monetary services.

We have mentioned two essays- a 500 words Long Essay and a 200 words Short Essay. The extended essay on Bank consists of 400-500 words. The Long essay provides a framework that helps students with their competitive exams and assignments. The short essay on Bank is written for 200 words and is suitable for children and kids with their classwork.

Given below is an extended essay on Bank for aspirants of competitive exam and students belonging to classes 6,7,8,9, and 10. The Bank essay helps the students with their class assignments, comprehension tasks, and even for competitive examinations.

A bank is a licensed monetary institution to make loans and receive or deposit money. It provides financial services such as safe deposit boxes, wealth management, and currency exchange.

The inception of a Bank/Banking system in India goes back to the Vedic civilization. Loans were given to those in need and were then known to be the name ‘rnalekhya or rnapatra.’ As time evolved, Big merchants and business people started bidding interests on loans to farmers and small traders and the unpayable assets were confiscated.

The first Bank established in India was the Bank of Hindustan at Calcutta in the year 1770. This was followed the start of other banks such as Bank of Calcutta, Bank of Madras, and Bank of Bombay in the early 19th century.

Classifications of a Bank

Functions of a Bank

The essential function of a bank is to receive deposits. Theses deposits are received as fixed deposits- which have a limited time frame, current deposits- require no interests and are framed mainly for business people and savings bank deposits to encourage savings with a 5 percent interest rate.

Another primary function of a bank is to lend money through cash credits or loans, overdrafts, or discounting bills. The banks usually charge a higher interest rate while giving money.

Importance of a Bank

A bank helps people cultivate the habit of saving and provides safe custody. It collects bills, drafts, cheques, and grants credit facilities and loans to people. It facilitates making payments and secures the overdrafts and loans.

A bank also provides safe custody of valuables such as deeds, ornaments, documents, jewels, etc. It also sells and purchases stocks, shares, etc. A bank is essential as it provides Credit information and a Letter of Credit and acts as representatives and makes correspondence.

Thus, a bank forms an integral part of society and is a critical factor that boosts economic development in the country. 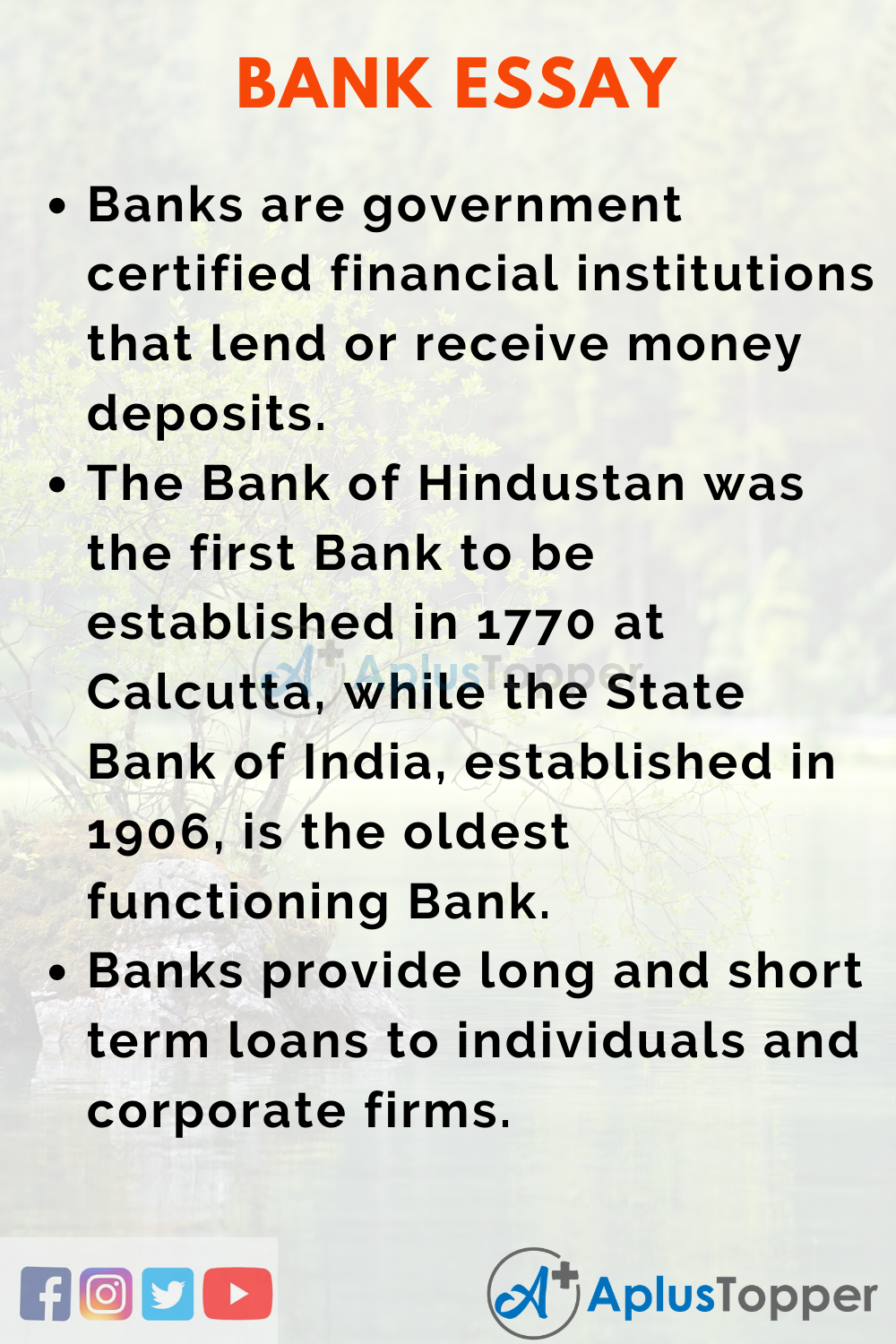 The 200 words short essay mentioned below is suitable for kids and children up to 6th standard. The essay is written to guide the children with their school works-assignments and comprehension exercises.

A bank is a financial institution that provides funds based on credits to firms or individuals and accepts money deposits from the general public. A bank offers various functions such as transfer of funds, issuance of drafts, locker facility, portfolio management, etc. The first established Indian Bank is the Bank of Hindustan, located at Calcutta in 1770.

A bank plays a vital role in the economic development of a country as it removes the deficiency of capital and encourages investment and savings. It resembles all the savings of society and makes it available for investment.

There are a total of 34 functioning banks in India; out of 12 banks are public sector banks, and the remaining 22 banks are private sector banks. The Top ten banks include

In short, Indian banks play an essential role in boosting the economic development of a country. It mobilizes the financial resources and flow of money in a society. 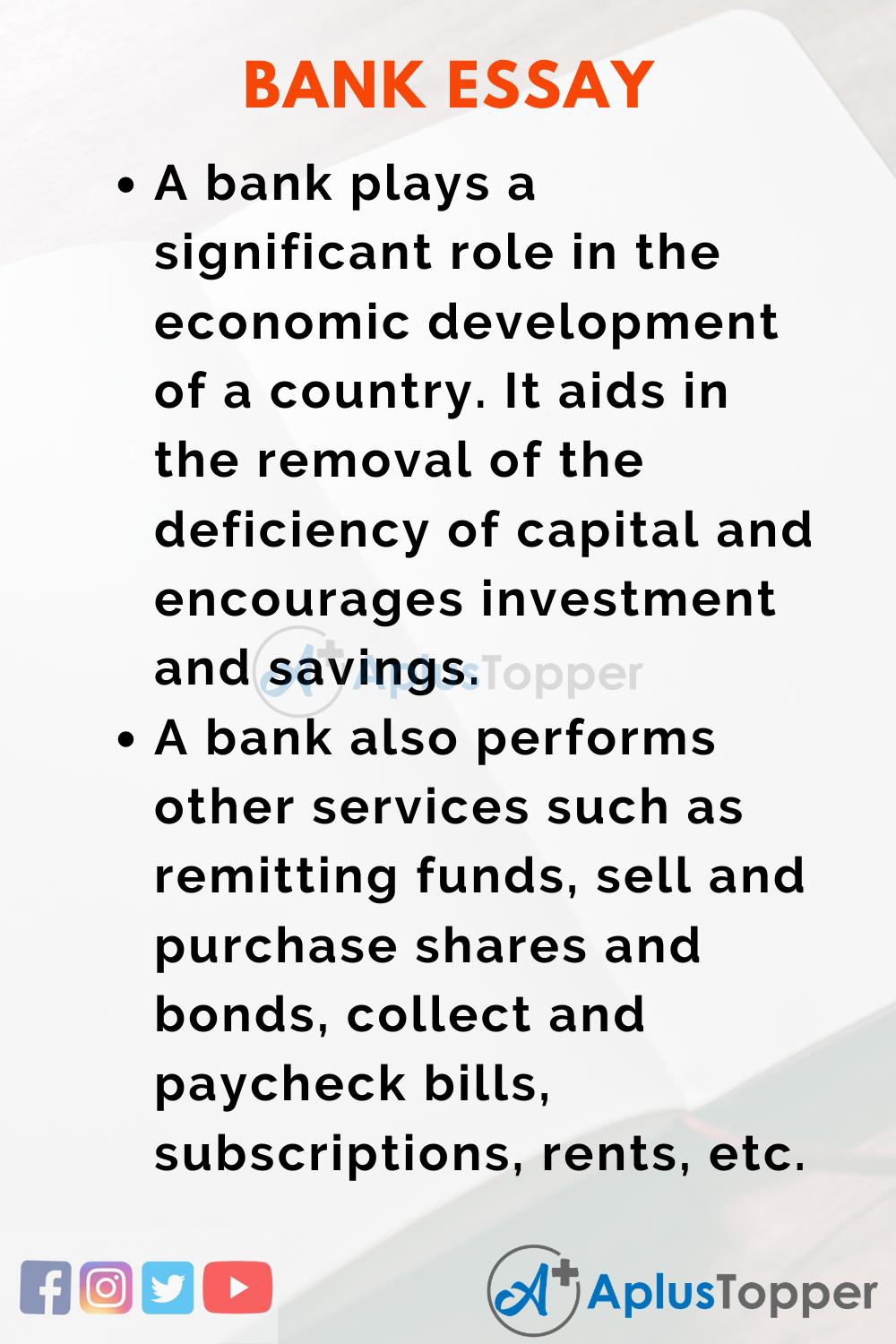 Question 1.
State the significant functions of a bank?

Question 2.
Which is the first Indian Bank?

Answer:
The first Bank to be established in India was the Bank of Hindustan in 1770 at Calcutta.