Essay on Animals: The presence of animals is essential because it maintains the balance in the ecosystem. In today’s world, some animals also serve as companions and help reduce our stress, anxiety, depression, and loneliness. Every organism has a unique place in the food chain, and each contributes to maintaining the existence of life on this planet. The man had learned early that with their more complex and advanced mind, they are superior to any other animal on the Earth.

What makes man superior to them? Humans had learned the ways they can use some animals for their survival, like for transportation or as a food source.

We are providing students with essay samples, both long and short essay type, on the topic ‘Animals.’ We will also include ten pointers on the same topic so that the students can use these to construct their essays.

The living organisms that are eukaryotes and formed of numerous cells and those who sexually reproduce are called animals. Animals play a unique role in maintaining the balance of nature. Several animal species exist in both land and water, and each has a purpose for their existence.

The animals are divided into particular groups in biology for better understanding of their species like- amphibians (the animals that can live on both land and water), reptiles (scaled body and cold-blooded animals), mammals (the animals that give birth to the offspring in the womb and has mammary glands), birds (forelimbs evolved to wings, mostly feather-covered body, and lays eggs for giving birth), fishes (has fins in place of limbs, and gills for respiration in water), insects (they are mostly six-legged or more, and most have a head, thorax, and abdomen), etc.

Since human beings’ existence and evolution, we have established ourselves as the greater and more superior species for our sophisticated and more advanced way of thinking and applying. Humans have also learned to use animals for their benefit and have realized how to incorporate animals into our social lives. Animal husbandry is not a new practice done and has been in existence for a very long time.

The bond between humans and animals has increased, and now both coexist with a mutual understanding of nature. We have also strived to preserve the near exist and rare species through modern modes of conservation like zoological gardens and sanctuaries.

We have used animals for clothes, food, transportation, and entertainment. Animals have also been beneficial for us to discover new things from research and tests. Several vaccines and medicines are the blessings of the resources we obtained from animals. Animals have also been a part of outer-space explorations, which has achieved milestones in scientific discoveries.

Among these activities, some were for good reasons and to sustain a livelihood, but some were just the act of evil and torture the poor animals. With the modernization of the world, people started thinking about animals and worked for their rights.

It is essential to realize that with power, great responsibility comes as well. Hence, we should never abuse animals for our benefits. As good human beings, we must always revolt against any inhumane activity that harms our fellow wild friends. 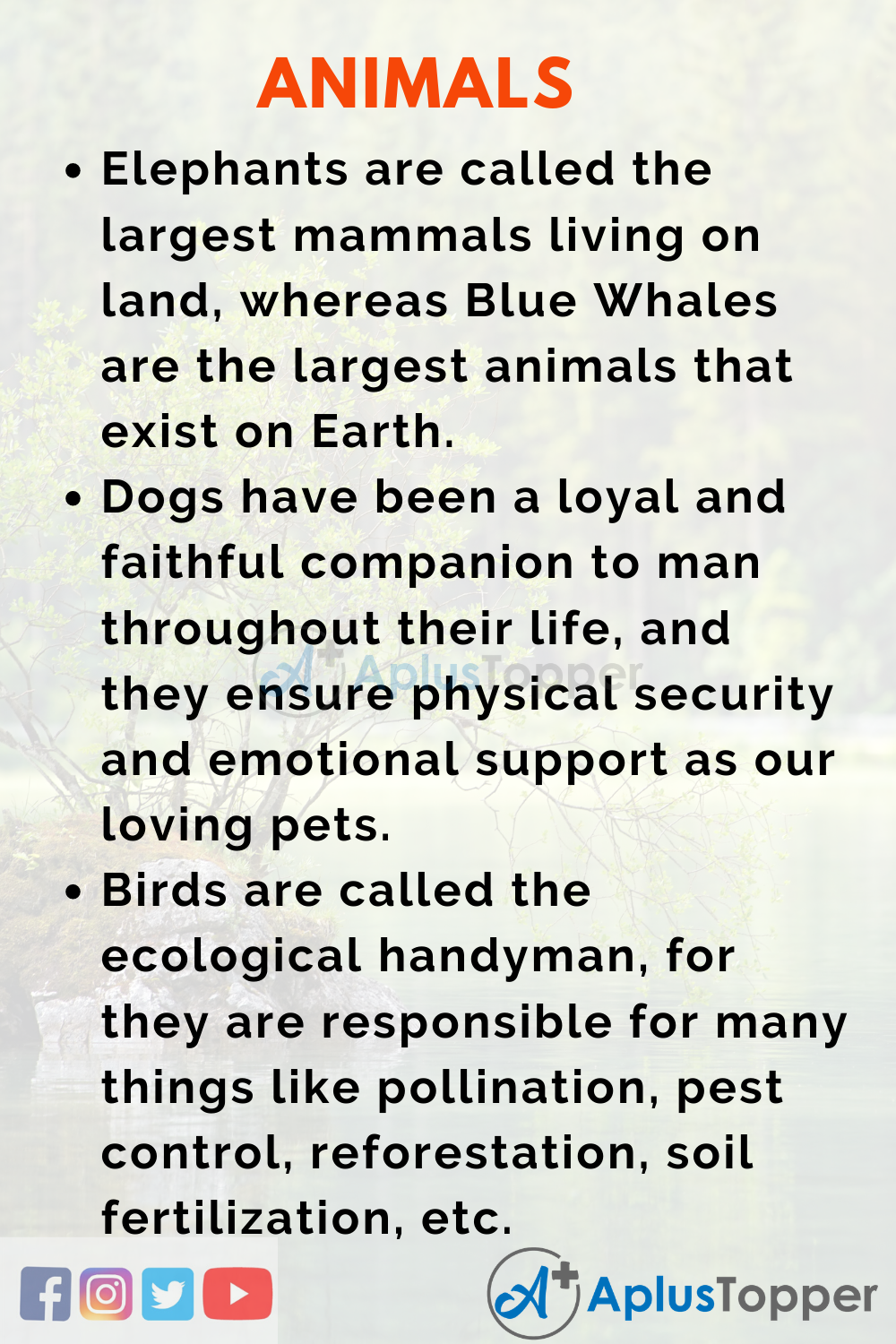 From the beginning of human civilization, we have interacted with wildlife. Before trade and commerce existed, human life had to depend on animal resources in some places solely. Our ancestors who lived in caves and were nomads and some big animals were a threat to their life.

But eventually, they learned to fight and survive and use the skin of the animal for clothing as a layer of protection from cold, used the meat as food or bait, and also came to use ivory elements as utensils or ornaments. Now animals contribute to many more aspects like our transportation, social life, economy, etc. Hence, it is our responsibility to preserve and protect them against any abuse that is not necessary for our existence.

10 Lines on Essay on Animals in English 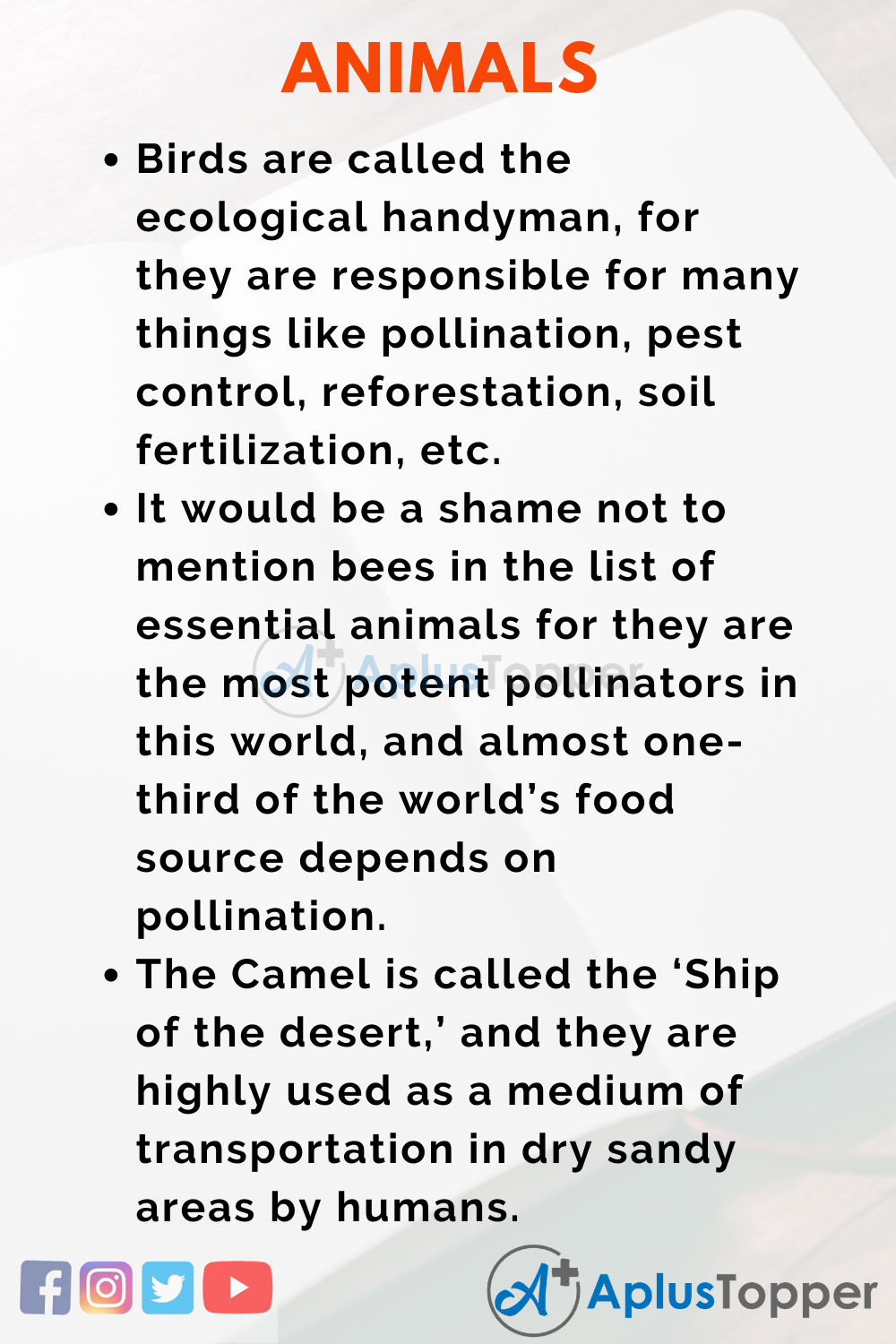 FAQ’s on Essay on Animals

Question 1.
What is the study of animals called?

Answer:
The scientific study of animals is called zoology, which involves research and discoveries about different animals.

Question 2.
What is the definition of animals?

Answer:
The animals are the multi-cellular eukaryotic (living) organisms that belong to the biological kingdom ‘Animalia’ and can sexually reproduce (other than the asexual animals).

Answer:
A ‘zoo’ is the abbreviation of the zoological garden or zoological park, and it is a confined facility that encloses several breeds of animals. A zoo is a place open for public viewing, and the purpose of this facility is to entertain and educate the people while also serving as a scientific research opportunity for those species present in the zoo. Zoos are also used for rare species conservation and are regulated by the government.

Question 4.
What are the living organisms other than plants, which are not considered to be animals?

Answer:
Apart from plants and animal species, several living organisms exist on Earth. Examples of some of these organisms are bacteria, protozoa, algae, fungi, etc.