Essay on AIDS: AIDS or acquired immunodeficiency syndrome is a life-threatening disease that one can contract via contact with blood or via sexual activity. It refers to when HIV or human immunodeficiency virus makes its way into a person’s body. HIV/AIDS affects the immune system so that the bodies of those affected with AIDS find difficulty in fighting minor illnesses.

Below we have given a long essay on AIDS of 500 words. Long Essay on AIDS in English for classes 7, 8, 9 and 10 and Competitive Exam Aspirants

AIDS or Acquired Immuno Deficiency Syndrome is a life-threatening disease which is caused by the Human Immunodeficiency Virus or HIV. This is the reason why the anagrams of HIV/AIDS are often grouped with each other. The virus threatens its victim’s life as it weakens the host body’s immune system. This is incredibly dangerous to people who have weak immune systems, and even more so for those with a disease like AIDS. First, we need to know the function of the immune system to understand the severity of an immunodeficiency syndrome.

The immune system is the bodily system that defends or protects the body from infections, illnesses, and other such problems. It builds antibodies within our bodies against diseases that we have suffered from before, so it can protect us from sickness again. In simple terms, the immune system is the part of your body that fights off infections and keeps you safe and healthy. With this being said, you should now understand better why somebody with a weak immune system is more prone to illnesses.

When HIV enters the body, it attacks the immune system by destroying CD4 cells. These cells are the ones responsible for fighting off illnesses, and HIV destroys them, weakening the system so that it fails to defend the body from other diseases. This is the reason why we call it life-threatening because it makes the body of the sufferer physically vulnerable. With HIV/AIDS, even a controllable infection like the common cold can become fatal, as the immune system is unable to fight it off.

AIDS is called the ‘Acquired’ Immuno Deficiency Syndrome because it is a disease that you can only acquire from another person, including your mother, who can pass it down to you at childbirth. The main mode of transmission of HIV/AIDS is via unprotected sexual activity, which makes it a sexually transmitted disease (STD), or if you come in contact with an HIV-positive individual’s blood. This can be by sharing a needle, coming in connection with a bleeding wound, etc. which can transmit the syndrome to you.

The most unfortunate part of suffering from AIDS is that there is no permanent cure for it as of yet. However, there is the treatment to help keep the level of CD4 cells high and reduce the amount of virus in the body. This means that once someone has been diagnosed with AIDS, they must be extremely careful living their life and follow their treatment to the dot so that they can live the best lives possible for them in that situation.

Many celebrities have also been diagnosed with HIV/AIDS, such as actor Charlie Sheen, singer Freddie Mercury, comedian Steve Moore (who even made an HBO special about it), among several others. HIV/AIDS activism is a relatively new concept that calls for the normalization and destigmatization of positive individuals. While HIV/AIDS is a terrible disease to take people over, it is a must to remember that there is always hope, even on the darkest days.

AIDS is a horrible disease which threatens the life of the people who have got it. It is a disease that a person can get when a virus called HIV enters our bodies. It is very dangerous for our bodies and can even lead to death.

In our bodies, we have a system called the immune system that takes care of us by fighting off any infection that comes to us. HIV destroys the cells in our immune system that saves us from becoming unwell. This means that if HIV enters the body, even small illnesses like a cold can make someone very sick.

A person can get AIDS when they come in contact with the blood of a person who has HIV. They can also contract it while doing some kind of sexual activity. Another way to get HIV/AIDS is by being born with it, but this only happens if your mother who gave birth to you had it. AIDS is not a natural disease, but it comes from somewhere else into the body.

It is challenging to live with HIV/AIDS because it can’t be cured. However, doctors can help you control it so that you can live happily. 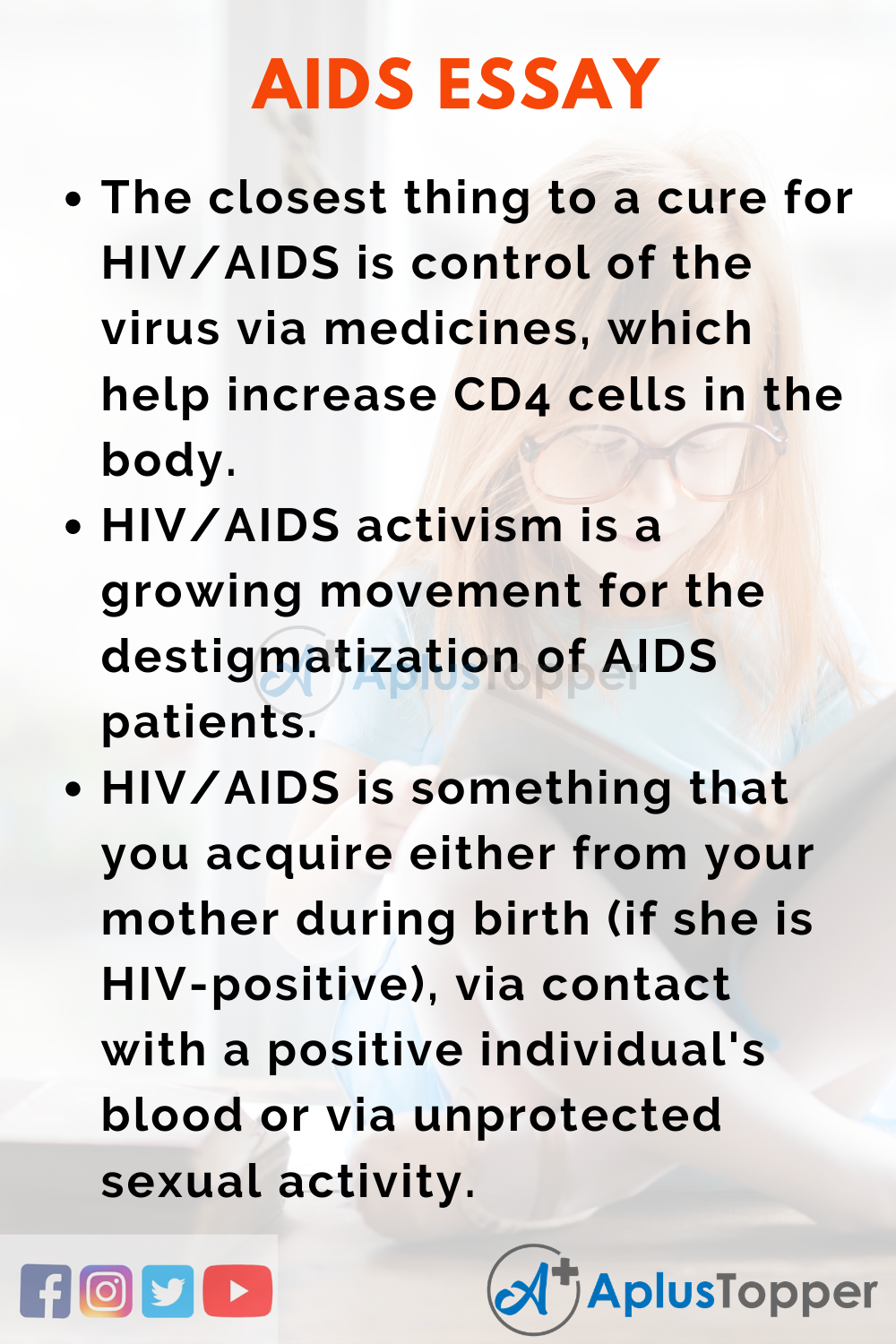 FAQ’s on Essay on AIDS

Question 1.
What is AIDS?

Answer:
AIDS is the Acquired Immuno Deficiency Syndrome caused by the presence of a virus called the Human Immunodeficiency Virus (HIV) in the body. It weakens the immune system in a life-threatening manner.

Question 2.
What’s the difference between AIDS and HIV?

Answer:
The mere difference between AIDS and HIV is that the former is a disorder with the immune system, and the latter is the virus that causes this disorder.

Question 3.
How can a person get HIV/AIDS?

Answer:
AIDS can be transmitted in one of three ways – by contact with HIV-positive blood, sexual activity with an HIV-positive individual, or via childbirth if your biological mother is HIV-positive.

Question 4.
Is there a cure for HIV/AIDS?

Answer:
No, there is no cure for AIDS, unfortunately, so for the individuals who suffer from it. However, there is a treatment that patients must take precisely the way they are prescribed to them, which helps increase the body’s illness-fighting cells.