Essay on Ahmedabad: Ahmedabad is included in the list of most developed towns across India. This city used to be called Karnavati. It is also popularly referred to as Amdavad. It is the biggest town in the state of Gujarat. Ahmedabad is also known as a metropolis. This city is filled with peace and elegance.

This city is also known to be the second biggest in terms of cotton manufacturing in India. UNESCO has also acknowledged Ahmedabad as a World Heritage City. This city is widely famous for the presence of several beautiful monuments, museums, parks, gardens, temples, etc. Besides, the food of Ahmedabad is another essential factor in this city that allures visitors.

We are providing students with essay samples on an extended essay of 500 words and a short piece of 150 words on the topic Ahmedabad for reference.

In ancient time, Ahmedabad was widely called Ashaval. The war between the Bhik King and Karna occurred; it was obtained successfully by Karna. After which, the city went with the name Karnavati, given by Karna.

In the fourteenth century, the rulership over the state shifted to the Delhi Sultanate. During the fifteenth century, Zafar Khan became the ruler of the country. The state of Gujarat is also famous for being the home of a great personality like Mahatma Gandhi. Ahmedabad has also been an important place during the war of freedom.

The two ashrams founded by Mahatma Gandhi is situated in the city of Ahmedabad, namely Kochrab Ashram, and The Satyagraha Ashram. Several vital movements took place in this city.

The city of Ahmedabad is quite famous for the variety of food available. This city has prohibited alcohol. There are several festivals celebrated by the people of Ahmedabad. The most famous festival celebrated in this city is Navratri. During this festival, the entire city is adorned with beautiful and sparkling lights.

During Navratri, Garba is played across the entire city, which is known as the famous form of dance of the state. The atmosphere of the city during any festival is filled with happiness and excitement. Therefore, it is considered an excellent time to visit Ahmedabad during festivals.

This city is also the home of some of the most renowned institutes like the IIM, MICA, etc. It ensures to provide high-quality education to the students in this city. Besides, the city is filled with several libraries, parks, and museums.

One of the main attractions of this city is the combination of various types of architecture. This city has creative passageways called ‘pols’ that are very intriguing to the visitors.

Ahmedabad amuses the tourists in the most astonishing ways. Also, the contribution of Mahatma Gandhi towards the freedom moment of India is reminded by the Sabarmati Ashram.

This city even gives the motivation for people to enjoy every moment of life with various festivities such as International Kite Festival or Navratri. It even becomes a famous spot for the nature lovers as it has multiple riverfronts with astonishing beauty and also homes Indroda Nature Park which is the only museum of the country with Dinosaur remains.

Ahmedabad is also famous as “Machester of India” due to its various shops of dairies and textile industries. It also acts as the commercial hub for the country and is given a place among the cities chosen for ‘Smart City’ project.

This city is also well-known for its production of fabric such as bandhani and khadi and thus, acts as a famous place for shopping in India. To complete your tour of Ahmedabad, one must taste the various available flavours of the cuisine. Ahmedabad also provides dairy products which are regarded as the richest and creamiest single throughout India.

This city is also famous for giving the best experience for shopping for visitors. It is also well-known due to its gems embroidered fabrics, block prints and textiles. 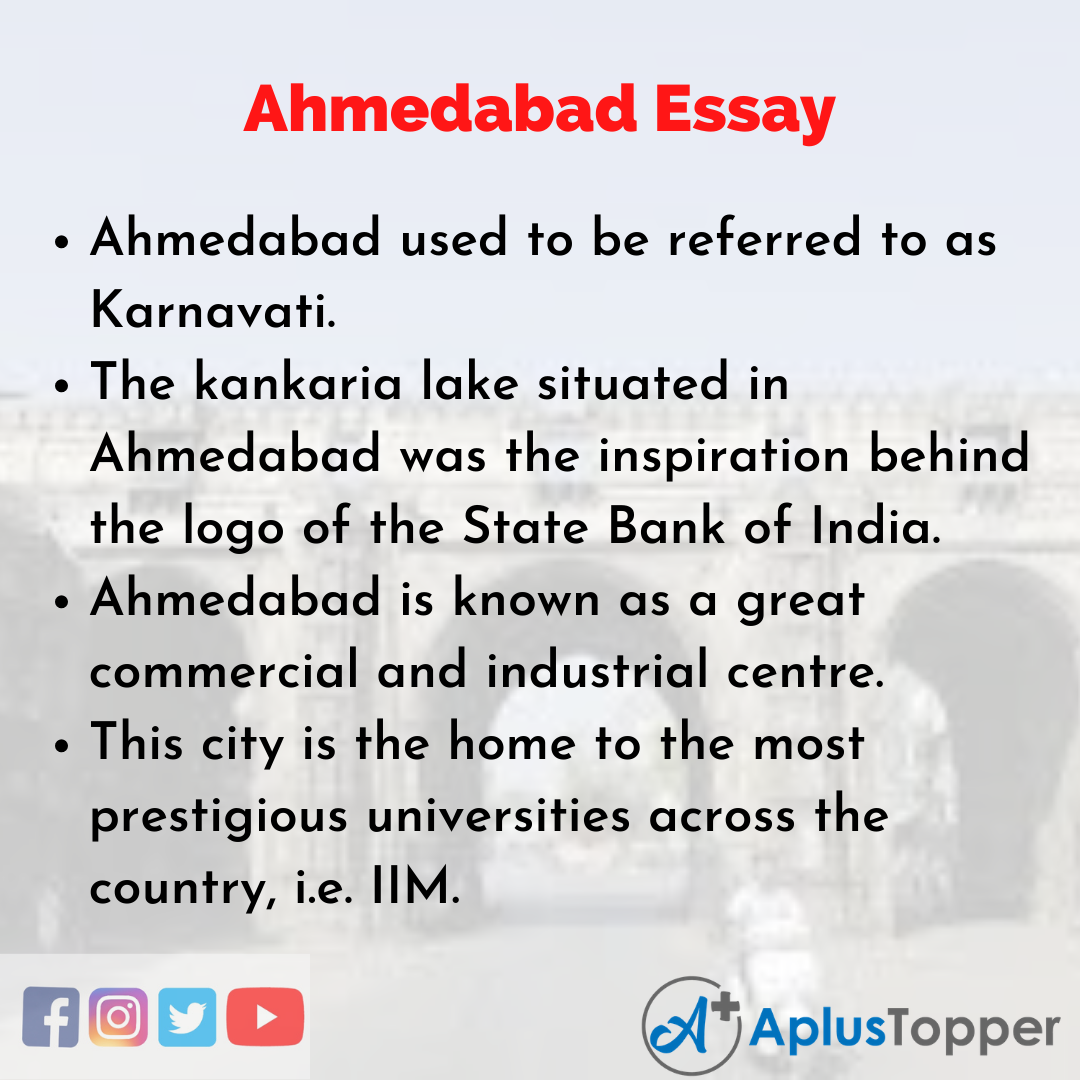 Ahmedabad is growing exponentially as the centre for industries and education. This city has a glorious historical background. It is known to be one of the most crucial towns present in Gujarat. This city is situated on the river banks of Sabarmati. This city used to be known as the capital of Gujarat.

This city is well-known for offering numerous mouth-watering delicacies. Besides, the culture of the city is very dense and rich, which never fails to amuse the tourists. This city houses several magnificent temples, including the Swaminarayan Temple. This city is also filled with fascinating museums and charming markets along with an ancient or historical touch to it.

This city has successfully managed to maintain its old attractions even with the rapidly changing time. Ahmedabad is well-known for its tie-dye bandhani handloom method, textiles, which makes it an incredible shopping destination. It offers traditionally designed dupattas, bandhani sarees, and so on.

10 Lines on Ahmedabad Essay in English

1. Ahmedabad used to be referred to as Karnavati.
2. The kankaria lake situated in Ahmedabad was the inspiration behind the logo of the State Bank of India.
3. Ahmedabad is known as a great commercial and industrial centre.
4. This city is the home to the most prestigious universities across the country, i.e. IIM.
5. Ahmedabad used to be known as Gujarat’s capital.
6. This city is included in the list of fastest developing cities across India.
7. Ahmedabad is referred to as the “Manchester of the east”.
8. Ahmedabad is founded in the 1411 AD by Sultan Ahmed Shah.
9. Ahmedabad included in the list of cities that are to be transformed into a smart city.
10. The second-largest manufacturer of cotton across the entire country is Ahmedabad. 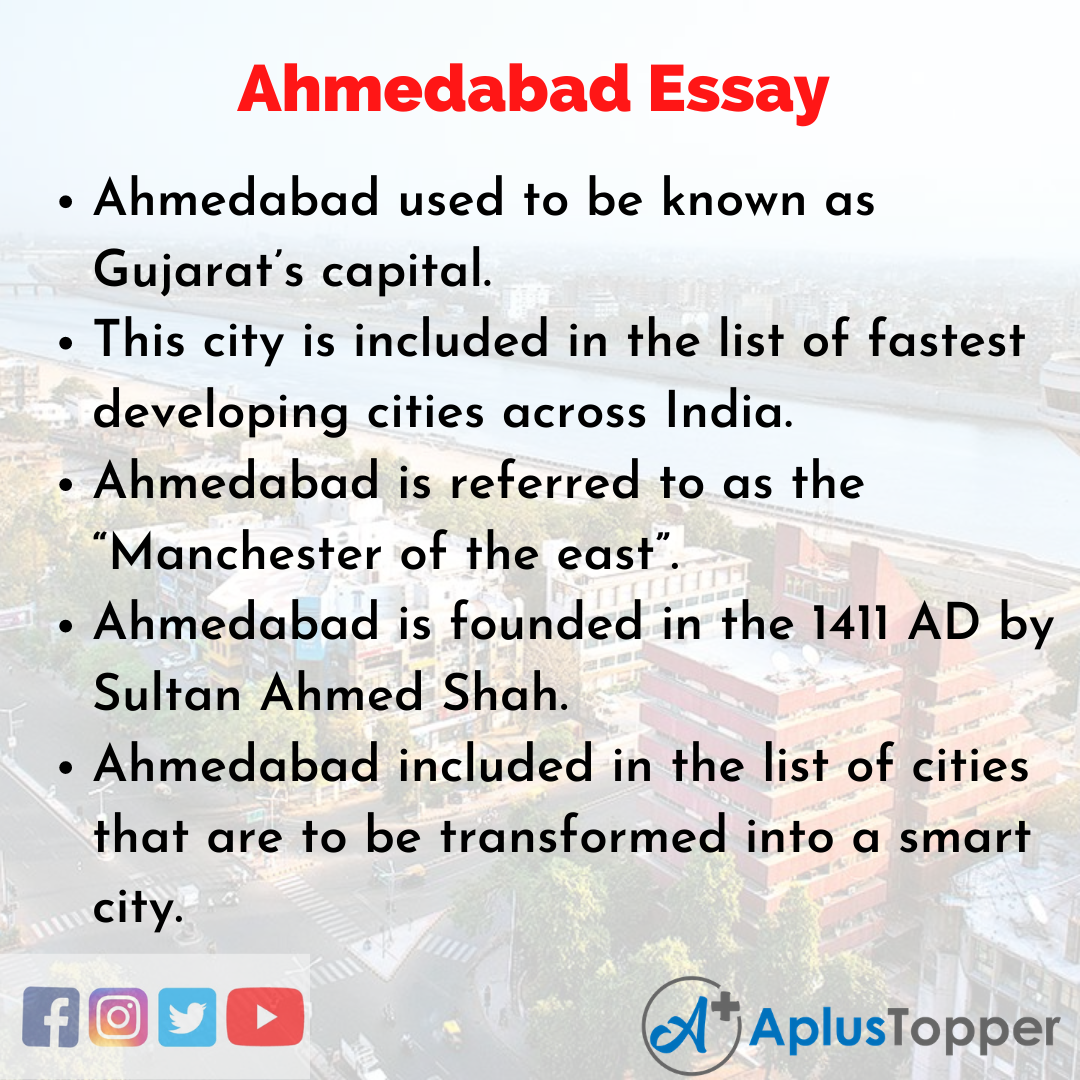 Question 1.
Why is Ahmedabad famous across India?

Answer:
This city is well-known for the politeness and friendliness of the people living in it.

Question 2.
Which months are the best to visit Ahmedabad?

Answer:
The ideal time for visiting this city is from October to March.

Question 3.
Which are the foods famous in Ahmedabad?

Question 4.
Which are the popular destinations in this city?