Debate on Republic Day: On 26 January 1950, the Constitution of India was adopted after attaining Independence on 15 August 1947, celebrated as Republic Day.

A warm welcome to the Honorable Judes, Respected teachers and all my dear friends and opponents. I find immense pleasure to speak in favour of the motion Debate on Republic Day.

On 15th August 1947, India got freedom, but it was not fully free. Then on 26th January 1950, India’s first Constitution was made, making India an entire self-rule country. From then onwards January 26 is celebrated as Republic Day every year in India also called as ‘Gantantra Diwas’. We the Indian citizens are celebrating the 72nd Republic Day this year. People celebrate this day with great enthusiasm. Many educational institutes including schools and colleges organize different cultural events, debates, essay-writing, skits, speeches and many other.

Republic day recalls the great freedom fighters of our country who sacrificed their lives to get us full freedom (Purn Swaraj). It’s because of their struggle that today we are living in a democratic country where each citizen has the right to equality, right to freedom, right against exploitation, right to freedom of religion, educational rights, and right to constitutional remedies.

Through this Debate on Republic Day lets us know why this day is celebrated and what are its significance.

Though India obtained its independence on 15 August 1947, the nation did not have a permanent constitution, instead, the country still obeys the laws that were based on the modified colonial Government of India Act 1935.

After much contemplation and modifications, finally, history was created. And the Constitution of India came into effect on January 26th, 1950. Finally, India has declared a republic country with Purna Swaraj.

A republic is a form of government in which “power is held by the people and their elected representatives”. In a republic government, the country is considered a “public matter”, with a right of equality for everyone not the private concern or property of the rulers.

Every year Republic day celebrations take place at the Rajpath, Delhi, the capital of India before the President of India. Various activities like flag hoisting, reciting the national anthem and organising shows and events on this day, are the major part of expressing gratitude towards our country.

One of the main attractions of the Republic Day Parade is to pay tribute to the martyrs who have sacrificed their lives for our beloved country and to confer bravery awards on military persons, citizens and children for showing courage in the face of adversity.

The Honorable Prime Minister of India at the very first lays a wreath at the Amar Jawan Jyoti at India Gate, in memory of all soldiers of the armed forces who gave up their life for the country. Followed by 21 gun salutes, unfurling of the National Flag and singing of the National Anthem. Next, on the eve of Republic Day, the President of India distributes prestigious Padma Awards i.e Padma Vibhushan, Padma Bhushan and Padma Shri to the civilians of India for their work in different fields every year also awards such as the Paramvir Chakra, Ashok Chakra and Vir Chakra are presented to gallantry award winners.

The security system of our country, the defense forces including the Indian Army, Navy, Air Force, police and paramilitary forces showcase their skills at the parade on Rajpath which is broadcast on television. Along with the various programs like performing stunts, air shows, stunts on motorbikes, tanks and other weapons systems which are the major achievements of our country also showcased. Also, beautifully decorated tableaus which signify the uniqueness and beauty of the various states of India are showcased. Visitors from different countries gather to witness the diversity and rich heritage of our country.

Debate on Republic day also wants to highlight that to mark the closing of Republic day celebrations, on the third day after Republic Day, the Beating Retreat ceremony is held on the evening of 29 January. The three wings of the military, the Indian Army, Indian Navy, and Indian Air Force bands perform on this day.

In my Debate on Republic Day, I have covered each and every point that is a pride of our country.

Thus I conclude my Debate on Republic Day with the message I’m proud to be an Indian. 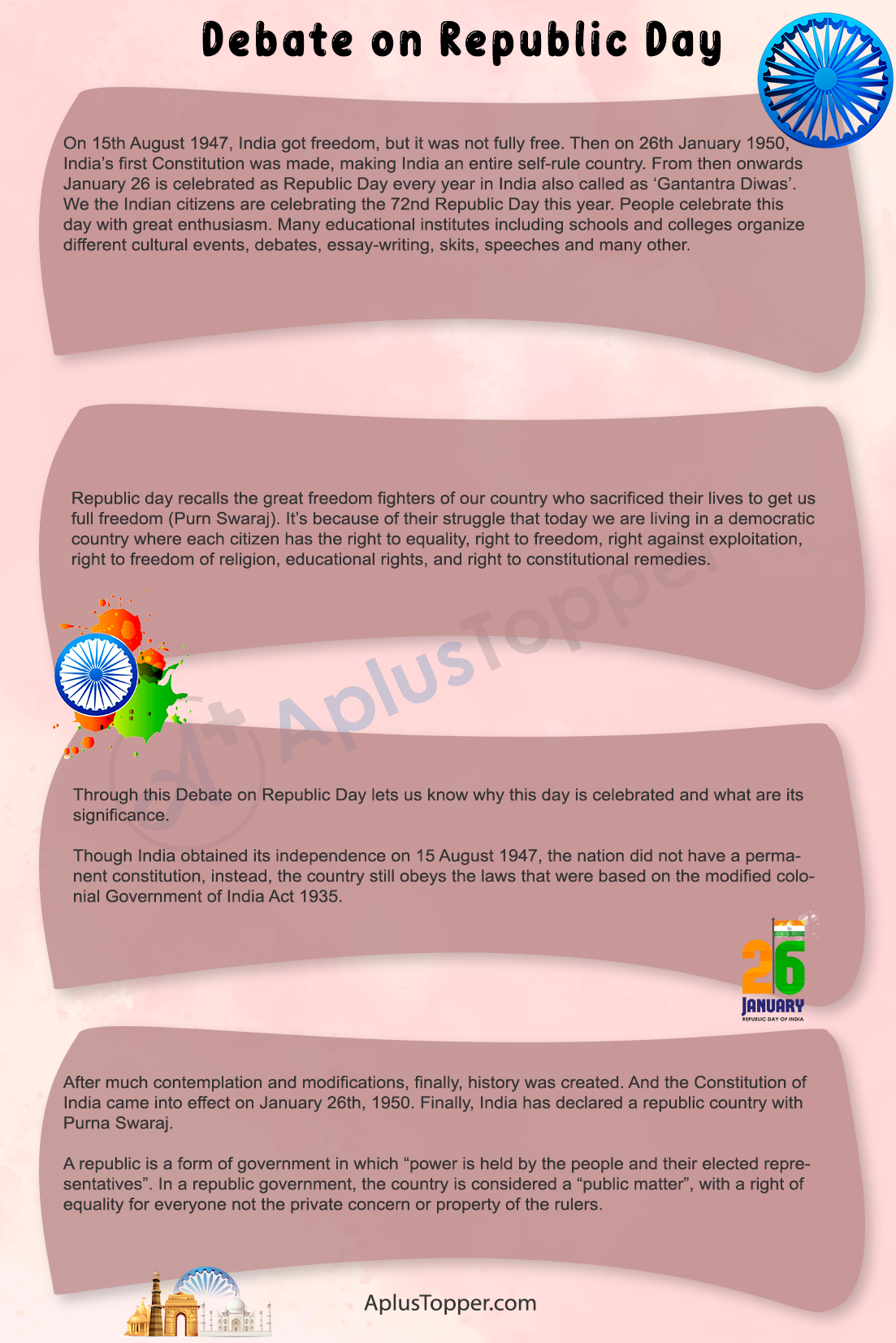 FAQ’s on Debate on Republic Day

Question 1.
Why do we celebrate Republic Day on 26th January?

Answer:
India became an independent republic country and the constitution of India came into effect on January 26, 1950, . Hence, we celebrate Republic Day on the 26th of January every year with great enthusiasm.

Question 2.
How do we celebrate Republic Day?

Answer:
Mainly, the Republic Day celebration is held in New Delhi with magnificent parades before the President of India. Republic Day is celebrated throughout the country in schools, colleges, institutions, government and private offices, etc with various programs and activities.

Question 3.
Who made India’s first draft of the Constitution?

Answer:
Dr. Babasaheb. R. Ambedkar was responsible for making India’s first draft of the Constitution, and he was also the drafting committee chairman of India’s constituent assembly.