Corruption In India Essay: There was a time when Gandhiji would say “My religion is based on truth and non-violence. Truth is my God and non-violence is a means of realising him.” Such were the principles of our political leaders at one time. Today what is more astonishing is that India has been ranked 94 on the Corruption Perception Index among 177 countries. While India is at the threshold of becoming superpower, the progress of the country is getting eaten up by the corrupt people of the country. Corruption is closely associated with bribery which means to give or to take profit for some illegal work. Corruption has progressively involved in every sphere of Indian society. Corruption is a cancer that is not restricted to any particular political party. It infects the whole society.

Long Essay on Corruption In India 500 Words in English

Below we have given a long essay on Corruption In India of 500 words is helpful for classes 7, 8, 9 and 10 and Competitive Exam Aspirants. This long essay on the topic is suitable for students of class 7 to class 10, and also for competitive exam aspirants.

In government hospitals, corruption is associated with non-availability/duplication of medicines, getting admission, consultation with doctors and availing diagnostic services. There have been several cases of manipulation of officials of the Income Tax Department of India for relaxed prosecutions in exchange of bribes. Corruption is prevalent on a large-scale during election times and votes are bought with the help of l money.

According to a report (in 2008), 120 of India’s 523 Parliament members were accused of crimes. Politicians and criminals are the main cause of corruption in every country. Lack of ethical qualities and morality among administrators and politicians, illiteracy among people, poor economic infrastructure all these have tightened grip over corruption. Artificial scarcity created by people, vast size of population, complex laws and procedures to eliminate corruption discourage the people for taking steps against corruption.

Tolerance of people towards corruption has indeed fueled the strength and greed of wrongdoers. This was aptly quoted by Arshad Warsi, “Dealing with corruption and staying calm is a talent most of us in India have mastered and learned to live with”. The causes of corruption in India include excessive regulations, complicated taxes and licensing systems, numerous government departments each with opaque bureaucracy and discretionary powers, monopoly by government controlled institutions on certain goods and services delivery and the lack of transparent laws and processes. These are significant variations in level of corruption. Even media has widely published allegations of corrupt Indian citizens stashing trillions of dollars in Swiss Banks.

Corruption is not only restricted to India, but is prevalent or to be precise is growing in many other countries today. The scams and scandals have caused Eurozone crises, the melting down of U.S. Economy and deflating politicians in the United Kingdom. Politicians advertise hugely at the time of elections, which are usually publicly funded campaigns.

The US military budget is bloated but perhaps half of it is spent on outsourced services, not on the military. The developed nations can still sustain this misfortune as they have strong economy, developed science and technology. But India is only crumbling and deteriorating under the burden of corruption. While speaking on corruption and other related problems Arvind Kejriwal once quoted “Political Revolution in India has begun Bharat jaldi badlega.” True, India has, and is taking steps to tackle this problem as they feel cheated for their valued contribution of funds and taxes. Under the leadership of Anna Hazare, who began ‘fast-unto-death’, the mass movement of people saw an expression of their collective anger against corruption. 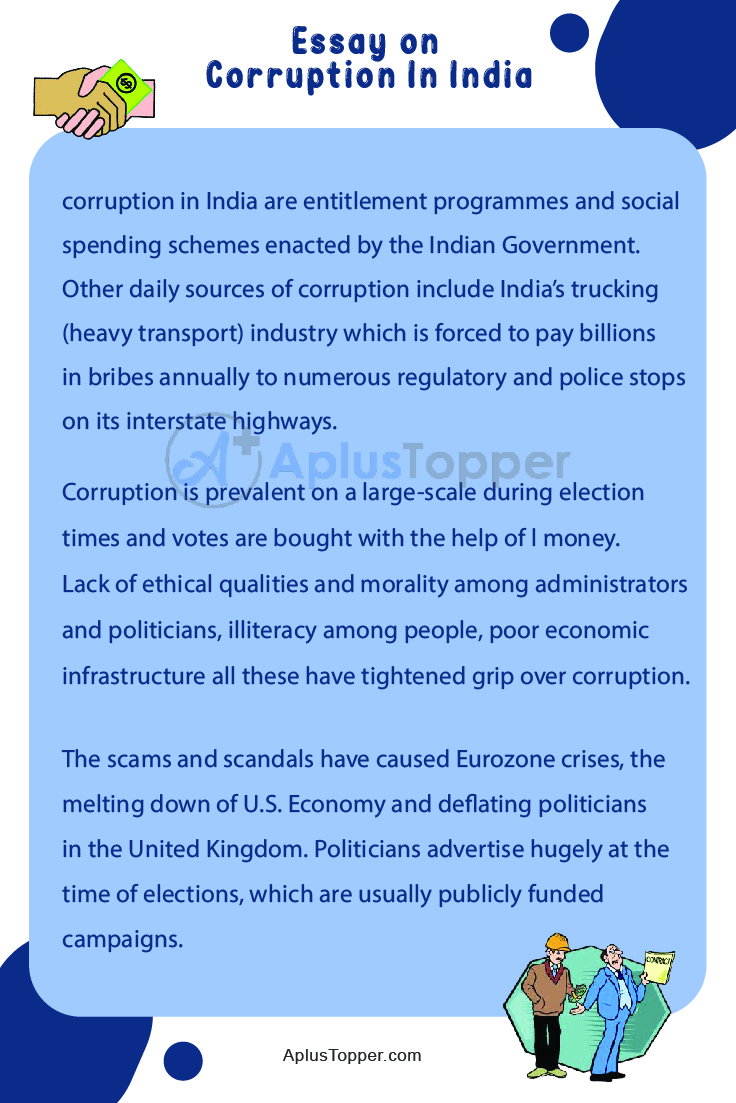 Short Essay on Corruption In India 200 Words in English

Below we have given a short essay on Corruption In India is for Classes 1, 2, 3, 4, 5, and 6. This short essay on the topic is suitable for students of class 6 and below.

The Lokpal and Lokayuktas Act came into force from January 2014 to inquire into allegations of corruption against certain public functionaries. The Right To Information (2005) Act that requires government officials to provide information requested by citizens has reduced corruption in some areas or atleast has opened up avenues to redress grievances.

Another Whistle Blowers Protection Act, provides a mechanism to investigate misuse of power by public servants, has received the assent of the President of India. But unfortunately is pending for notification by the Central Government. Role of media cannot be ignored especially in today’s times. Media can play a significant role to abolish corruption by exposing the scams and scandals, thereby awakening the citizens. Other measures are strict laws should be made; power to make policies in public interests should be vested with independent commission, people should have a right to question the elected representatives and get answers; funding of elections should be banned and persons with criminal records should be denied to contest elections. More and more courts should be opened for speedy justice. Lokpals and Vigilance Commissions should be more powerful and of independent nature so as to provide speedy justice.

India has every ability, talent and resource to be a developed nation, just some corrections here and there are needed. In one of movie ‘Nayak’ also this idea was emphasised wherein one person at the top political position was corrupt, he made his whole party full of corrupt people. Whereas another person with right intention, not only eradicated corruption, but changed the whole face and fate of his state.