These are some burning questions that one always ponders upon when the issue of corruption in India comes up. Through this particular essay on corruption free India, we hope some of the questions will be answered.

Find below a 600-word long essay on corruption free India is helpful for students of classes 7,8,9 and 10.

India, mostly in recent years, has become popular around the world because of the various scandals and corruption issues that have broken out in the power corridors of the country. Corruption has been a part of India ever since its birth. Corruption is not just something that is associated with politicians and businessmen, corruption is a problem in India that exists in all the levels, right from ministers to watchmen. Basically let us answer a few questions,

Corruption is an act of dishonesty and a criminal offense conducted by a person or a group of people or an organisation by abusing and taking advantage of their power and position of authority. This means that anything unethical done, for the greed of money, which is beyond the boundaries of the legality of the land, will be termed as corruption. Corruption can be on various levels. A minister taking bribes to provide a license for a businessman, a pion taking kickbacks and bribes to let you inside a government office, a doctor taking a bribe from you to provide you with a fake medical certificate are all the different levels of corruption. One thing we should remember is, giving bribe is as bad and unethical as taking a bribe. Whether the bribe is Rs. 10 or Rs. 10,000 crore does not matter, a bribe is a bribe.

While it is easy to say that we shouldn’t pay bribes, the ground relates to it are far from easy. Imagine your loved one has severe health issues and you don’t have enough money to go to a private hospital. So you have taken them to a government hospital, where you are required to pay a bribe for the authorities to get your loved admitted into the hospital. The question of ethical dilemma becomes faded here and saving the life of our loved one takes precedence. One can’t expect to follow rules and integrity in a time of crisis like this. So how do we tackle corruption in India?

The tacking of corruption should come from higher authorities and the strongest laws and regulations should be in place. There are many laws in places such as the Prevention of corruption act and Jan Lokpal to name a few. While laws are robust in nature, its implementation is somehow weakened. This essay on corruption free India is mostly confined to corruption in the public sector. There is massive corruption in private sectors as well who circumvent the law of the land to make quick money.

To prevent corruption, we have to understand why corruption takes place in the first place.

Why does corruption take place in India?

Whose responsibility is to prevent corruption

We simply can’t expect everything to be done by the government when in some cases, the government leaders are themselves involved in massive corruption scandals. The responsibility lies equally with everyone, right from top-level ministers to mid-level government employees and low-level watchmen and workers. The responsibility also lies with the customer and common citizen of the country. He or she should be vigilant and record the acts of corruption and expose such people in accordance with the law.

How to prevent corruption?

While there is no one good answer to that question, here are some steps that should be taken to prevent corruption. 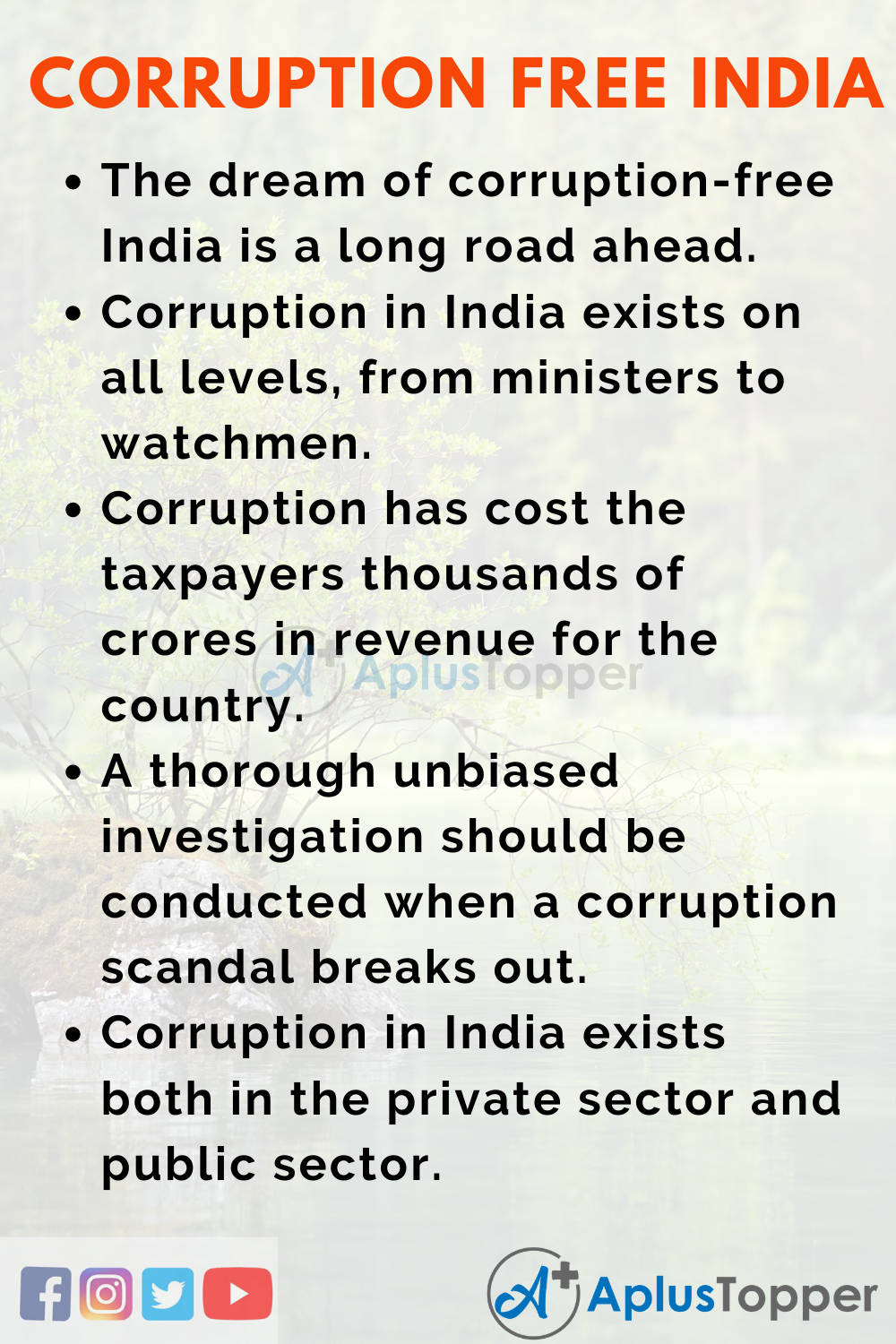 Find below a 200-word short essay on corruption free India in English is helpful for students of classes 1,2,3,4,5 and 6.

A corruption-free India is a dream that every politician promises his voters during elections but forgets it during the regime. While corruption is usually associated with public sector employees and politicians, we cannot deny the fact that massive corruption and criminal offences exist even in the private sector of India.

Preventing corruption is not an easy task, especially in a democratic country like India. India is a free-market country with strong laws on privacy and human rights. But this is not the case in authoritarian regimes like North Korea or China. When a state is a complete police state, it becomes easier to tackle corruption since there would be no resistance. But in India, even the anti-corruption officers need to follow the course of the law to prevent corruption.

It is a tricky situation since the criminals circumvent the law while the people catching them has to follow the law. Red tape bureaucracy, lack of accountability and inefficient leadership are some of the reasons for the rising corruption rates in Inda. For India to become truly corruption free, strong laws, the autonomy of power to government officers and good awareness campaigns for the general public should be done. 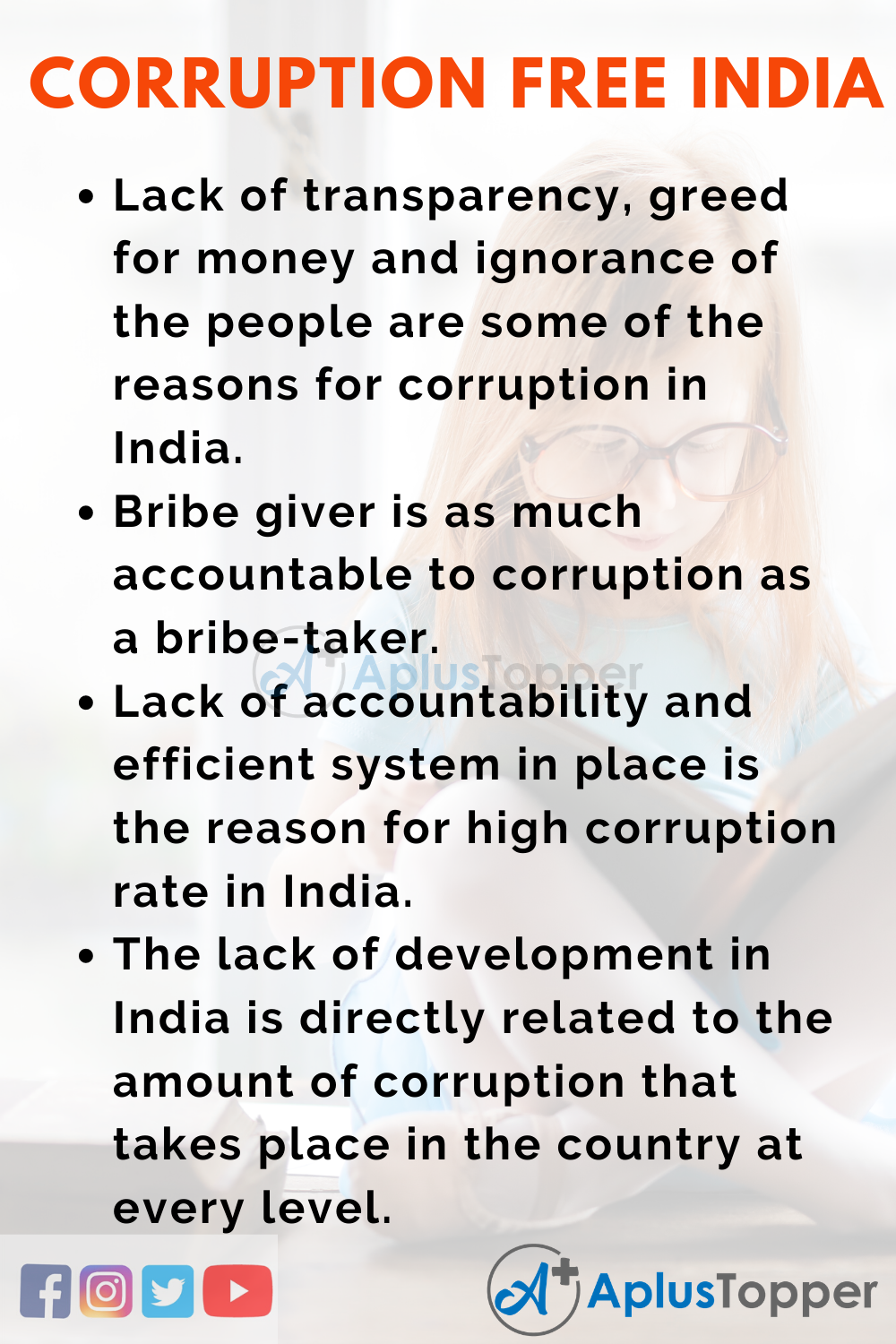 Question 1.
Which is the most corrupt country in the world

Answer:
South Sudan is considered as the most corrupt country in the world

Question 2.
Which is the biggest corruption scandal in India?

Answer:
The Common Wealth Games, popularly known as CWG scam is the biggest scam in India

Question 3.
What are the types of corruption?

Question 4.
What is the effect of corruption?

Answer:
The effect of corruption is seen in the development and economic distress