Causes and Effects of Global Warming Essay: The emissions of greenhouse gases have caused global warming. One of the many effects of global warming is that it has led to an increase in the planet’s temperatures.

The leading cause of global warming is the release of harmful and toxic gases into the atmosphere. Some of the harmful gases include carbon dioxide and sulphur dioxide. These two gases are the main ones because of the burning of fossil fuels and industrial activities.

There are various effects of global warming. Some of the results are acid rain, climate change and depletion of flora and fauna. Here in this article, we have provided short and long essays on Causes and Effects of Global Warming Essay in English. The essays have been written in simple yet effective English for your information and knowledge and aim to help during school assignments or a speech on Causes and Effects of Global Warming.

We provide children and students with essay samples on a long essay of 500 words and a short essay of 150 words on the topic “Causes and Effects of Global Warming” for reference. 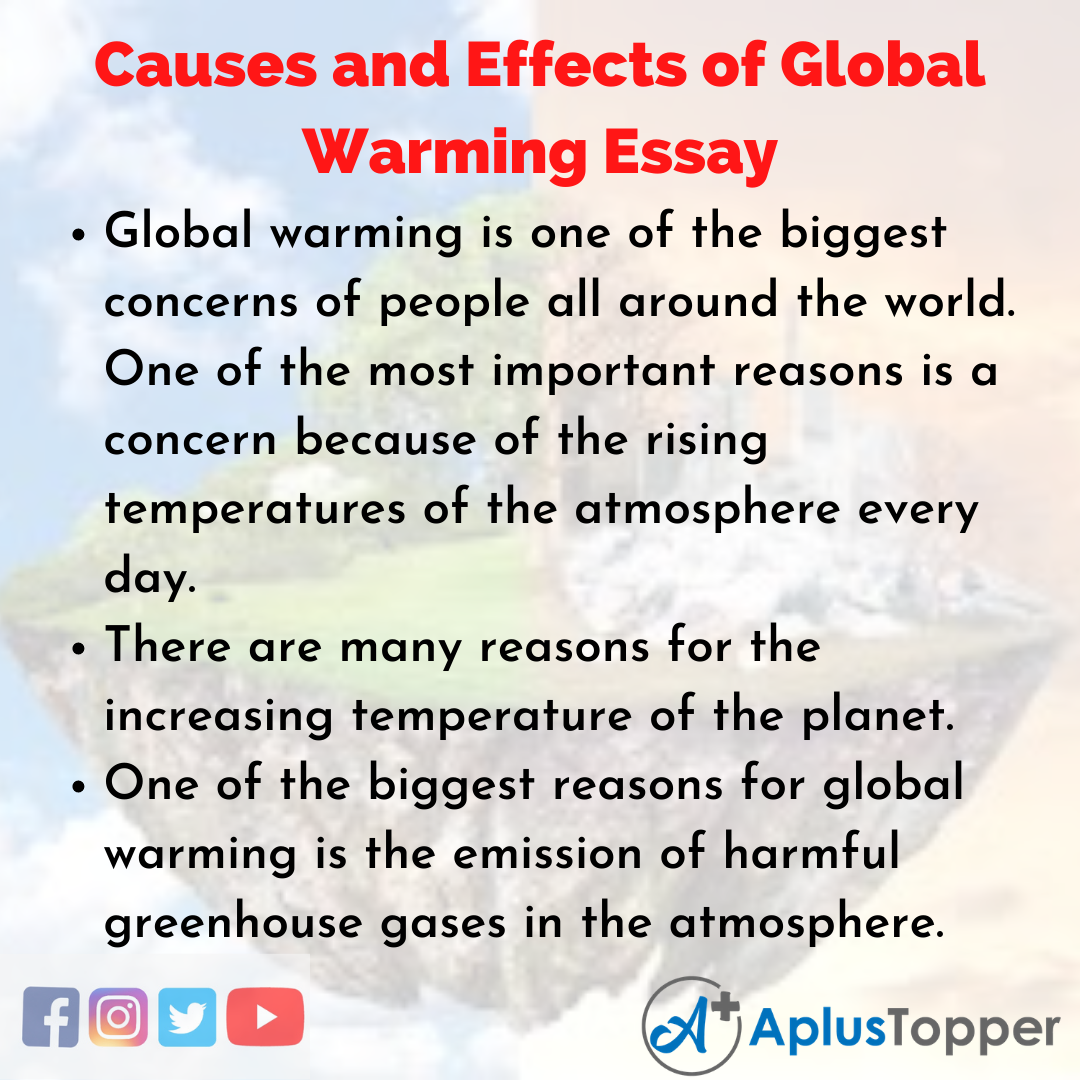 Global warming is one of the biggest concerns of people all around the world. One of the most important reasons is a concern because of the rising temperatures of the atmosphere every day.

There has been continuous emission of the greenhouse gases by the activity of the humans. Some of the humans’ activities that cause global warming are increasing automobiles, industrial activities and burning of fossil fuels. All the activities emit carbon dioxide in the air, which increases the temperature of the planet. The effects of global warming are visible in the environment around us. It is causing glaciers to melt, temperatures to rise, climate changes and unpredictable natural disasters.

The increase in environmental temperature and climate change on the planet has become evident in the last five decades. The concentration of the greenhouse gases in the atmosphere of the earth has increased. 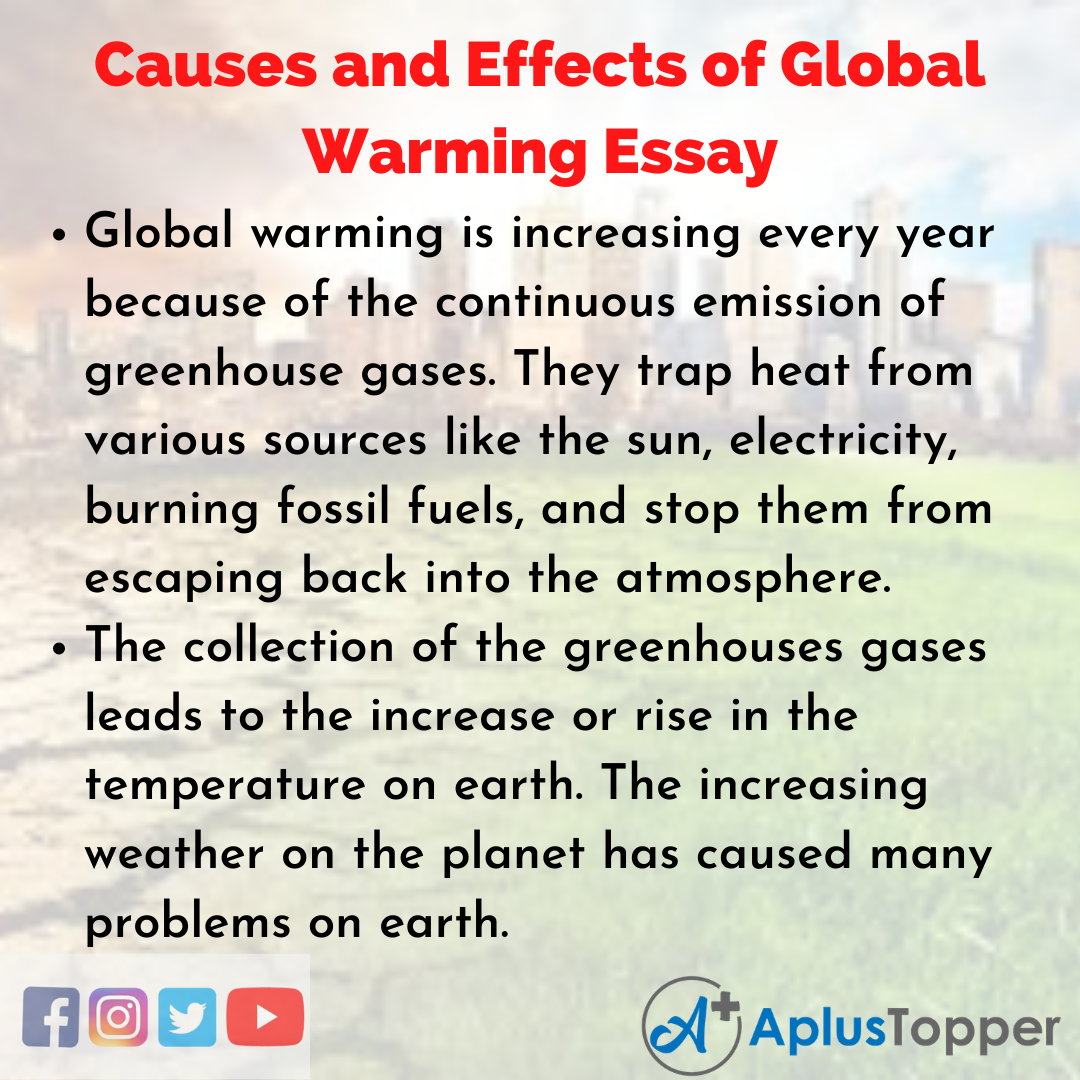 Long Essay on Causes and Effects of Global Warming is usually given to classes 7, 8, 9, and 10.

Global warming is increasing every year because of the continuous emission of greenhouse gases. They trap heat from various sources like the sun, electricity, burning fossil fuels, and stop them from escaping back into the atmosphere. The collection of the greenhouses gases leads to the increase or rise in the temperature on earth. The increasing weather on the planet has caused many problems on earth.

Earlier, the planet was cool, and the natural cycles in the climate were going correctly. However, the constant change in the environment due to global warming has caused the natural process to become irregular, and it keeps fluctuating. There are fluctuations in the weather, temperature, health and climate.

The rising temperature leads to the melting of the ice glaciers. When the glaciers melt, they increase the sea level drastically. In the past few decades, there has been an increase in temperature, sea level and the weather patterns. The various climatic changes happening around us are because of global warming. These effects of global warming are not coincidences. They are happening because of the activities of humans and the technological advancement of humans.

When there is a little increase in the amount of carbon dioxide emitted in the atmosphere, it causes a massive global temperature change. The continuous rise in the percentage of atmospheric carbon dioxide is dangerous and alarming because it is causing many changes.

Many people are ignoring the changes in the environment. People continuously use more fossil fuels for their needs, and this is causing changes in the background. Due to the continuous burning of fossil fuels, the carbon dioxide emission in the air is increasing. This is leading to an increase in the temperature of the planet.

Another cause of global warming is deforestation. It is causing the depletion of the plants, and it exposes the soil to direct sunlight. One of the best sources that absorb carbon dioxide is trees. However, due to the cutting of trees all around the planet, this source is depleting.

Humans cut trees to make more space for human occupation in areas that should be forests. We deplete the green cover and are harming the environment. If there is a little increase in the level of greenhouses gases may impact global warming immensely.

One of the major causes of global warming is the use of a chemical called chlorofluorocarbons. You will find the use of chlorofluorocarbons in refrigerators, and aerosols spray propellants and many other objects around you. These chlorofluorocarbons continuously damage the ozone layer, which increases the chance of the heat to remain on the planet. It is preventing the heat from escaping, which is increasing the temperature of the earth.

The destruction of the ozone layer is due to the emission of chlorofluorocarbons. When the ozone layer starts depleting, it causes the change in the environments. It causes an increase in health disorders such as skin cancer, respiratory diseases, and respiratory problems.

A significant effect of global warming is the damage it does to the seasonal crops and marine food. Marine life is facing the consequences of the changes in the climate as the sea is heating up. The weather changes are drastic due to global warming. Summers are longer, and winters have shortened due to global warming. Many countries have banned the use of chlorofluorocarbons because of the effects that it has on the environment. Their ability to degrade the ozone layer and trap more heat than carbon dioxide is the main reason for the ban.

There are many other causes of global warming. One of the causes of global warming is the emission of carbon dioxide by cars and other vehicles. The amount of carbon dioxide that is emitted by cars causes serious harm to the environment. In all the countries around the world, there has been an increase in the number of vehicles on the road. However, there has been a change because of the introduction of electric cars.

The scientists are continuously working towards finding ways to reduce greenhouse gas emissions and save the environment. Climate change and global warming are one of the things that most countries are trying to reverse. The increase in the emission of greenhouse gases is causing many problems in the environment.