Bullying in Schools Essay: The use of coercion, force, threat to aggressively abuse or dominate is known as bullying. However, bullying and conflict are not the same things. Bullying involves an imbalance of physical or social power but so is not the case in conflicts. Bullying is not a onetime thing but in fact, is a behaviour that is repetitive.

We are providing students with essay samples on a long essay of 500 words and a short essay of 150 words on the topic “Bullying In Schools” for reference.

Long Essay on Bullying in Schools 500 Words in English

When a person is seen to use force, coercion and (or) threat to dominate, harm or abuse, someone is known as bullying. Bullying is characterized by an imbalance of social and (or) physical power, which differentiates it from conflicts and fights. It is a repeated form of behaviour and is a result of malicious intent, sadistic behavioural patterns or underlying trauma or confidence.

There are various forms of bullying, a few of them being:

Bullying is or can be done individually or in a group. One can even remain anonymous when bullying. Bullying takes place at all levels of life, but one common place of bullying turns out to be schools.

Popular culture constantly brings into focus bullying in schools (especially high schools full of teens and young adults). Pop culture might even have had a role to play in the increase of bullying because pre-teens watching movies might even get inspired by the portrayal of bullies movies. A classic teen-drama movie that involves everyone bullying everyone that paved the way for bullying in the 2000s and 2010s is Mean Girls, later in the 2000s came another pop culture stop, Gossip Girl which is the epitome of Social, Verbal and Cyberbullying.

However, one should not be confused between a bully or a mean person. The later’s nature is so, and they do not have specific targets, whereas a bully can even be your friend or as sweet as honey. There are times when the blatant signs of bullying are not even present in a person from afar, but only the bully’s victim knows what is going on.

It is said that on an average one in every three children get bullied in schools. UNESCO also says that about 32% of students get bullied in schools all around the globe. When the behaviour of bullies is not checked in school when they are at the stage of growth, it continues to different stages of their lives and in turn affecting lives of those who they decide to bully. Short Essay on Bullying in Schools 150 Words in English

Bullying is defined as the use of coercion, force, the power to dominate and threat. There are different types of bullying, including physical, cyber, emotional, psychological, and verbal, amongst others, all of which are self-explanatory. They take place all around us, some we see, and some we don’t.

A common stage of life where bullying is prevalent are schools. Pop culture, throughout history, has often put the spotlight of school bullies in the reel world, but hardly any action has been taken in the real world. Around 31% of children, all around the globe get bullied, but not many of them face the consequences.

If children and teens are not stopped from pulling such aggressive, malicious behaviour (which is usually caused due to self-doubt and trauma, which although does not excuse one’s action) at an early stage, a report says that they might end up committing some form of criminal activity by their early or mid-twenties.

10 Lines on Bullying in Schools in English 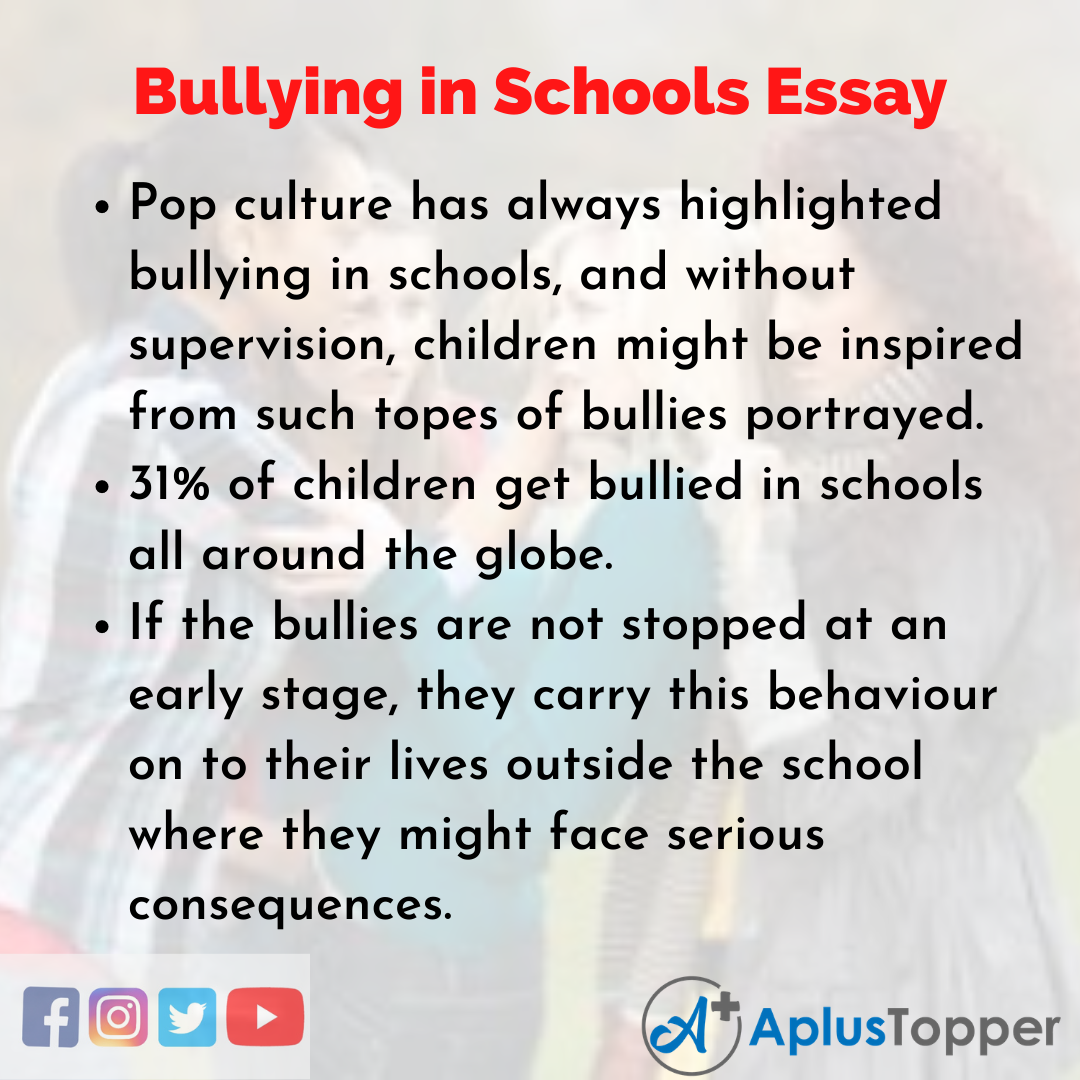 FAQ’s on Bullying in Schools Essay

Question 1.
What does bullying mean?

Answer:
Bullying means the use of power, force and coercion to abuse and dominate.

Question 2.
How does bullying take place?

Answer:
Bullying takes place in various forms that include physical,emotional, verbal, and psychological and cyberbullying.

Answer:
Once school gets over, the bullies, if not corrected before that end up affecting the lives of all those who encounter them outside and according to statistics, might end up committing a crime.