Animals that Start with K in English: When it comes to the diverse species of animals found on earth, the list goes on and on. We can’t remember all the animals that live on this planet. To relieve people from the worry of missing out on an animal, we have taken up the job of categorizing animals in alphabetical order. We have developed a list of animals found on earth whose names start with the letter ‘K’. In this article you can find Sea, Farm, Zoo, Small, Wild, Exotic, and Endangered Animals that start with K.

Name of Animals Whose Name Starting With K

Alphabetical List of Animals that start with Letter K

They are a kind of insect belonging to the Tettigoniidae family. They are found in parts of Canada, Australia, South Africa, and the United States. They are also known as Bush Crickets. They can camouflage between leaves of bushes and have a unique mating call.

They are a kind of rat species found in parts of North America. They are rodents of small size, and their hopping characteristic is very similar to kangaroos, which is the reason behind their name. They are nocturnal creatures and have giant hind legs.

They are unique animals living in the Australian Sub-continent. They have a particular hopping characteristic due to smaller and much weaker forelimbs and more extensive and more muscular hind legs. They have short, coarse brown hair and a weight of 6 to 7.2 kg.

They are an endangered bird species of New Zealand. They are large birds similar to parrots and have moss green to yellowish feathers. They are birds of historical importance for the Maori. They have a face similar to owls, and they are friendly nocturnal creatures who initially lived in small groups.

They are a bird species residing in the forests of the New Caledonian region. They are unique among other birds due to their pale grey feathers and bright red-colored legs. They have nasal corns and build nests that are close to the forest floor. They are on the boundary of extinction due to global warming and predators.

They are a bird species of the falcon genus. Their name is obtained from the French word crecerelle, meaning ratchet. They have a definite hunting characteristic where they hover over their prey and attack their target with force. They have brown and black feathers. 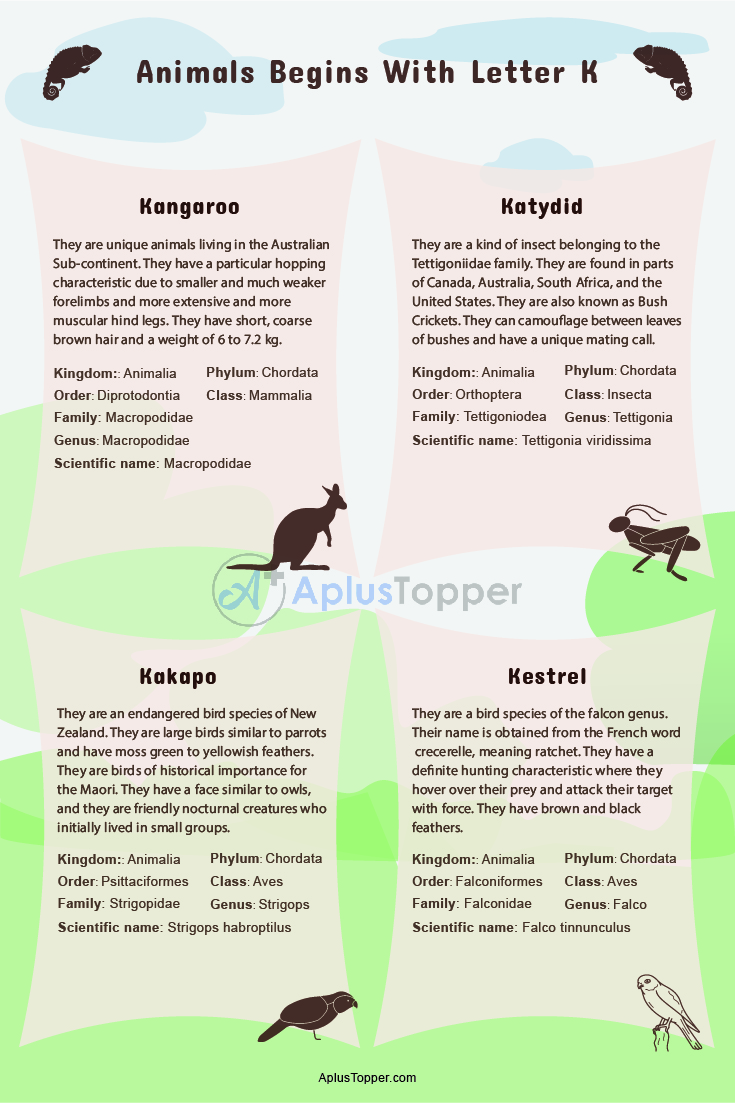 They are a dog of medium size, of German origin. They have long hair, short legs, and a double coat of fur. Their fur color is a mixture of black, white, and grey. They are about 46 cm in height and around 18 kg in weight.

They are an omnivorous toucan species of Latin America. They are also known as Rainbow-billed toucan and sulfur-breasted toucan. They are primarily found in the jungles of Columbia and Mexico. They go up to 500 g and have a yellow neck.

They are a species found in the tropical rainforest regions from the potos genus. They are alternatively called the honey bear. They are nocturnal animals and usually live up to 40 years. They weigh around 10 lb and reach a height of 57 cm.

They are a bird species also known as Alcedinidae. They are found in regions of Asia, Africa, and Oceania. They are small to medium in size and live near water bodies. They have unique blue-colored feathers on their back and a chestnut-colored belly. They are 46 cm and up to 426 g in weight.

They are the second-largest penguin species and very similar to emperor penguins. They are found on several Islands of the world. They can go up to more than 300 m depths to eat.

They are the giant crabs primarily sold and consumed due to their taste and high demand. They have a shell with spikes that protect their interior body from predators.

They are a venomous species of the Cobra group. They are found in forests of the South and Eastern Asian regions. They are easily distinguishable due to to their unique color patterns of black and beige. They hunt smaller species of snakes of their kind and others. The king cobra, before attacking, opens its neck, flaps, and hisses when provoked. They are able to reach targets of great heights, being vertical climbers and fast-paced snakes.

They are an oceanic whale species of the dolphin family. They have a white and black patterned body and can be found in most oceans around the world. They feed on smaller fish and mammals. They travel in close groups and have unique hunting techniques. 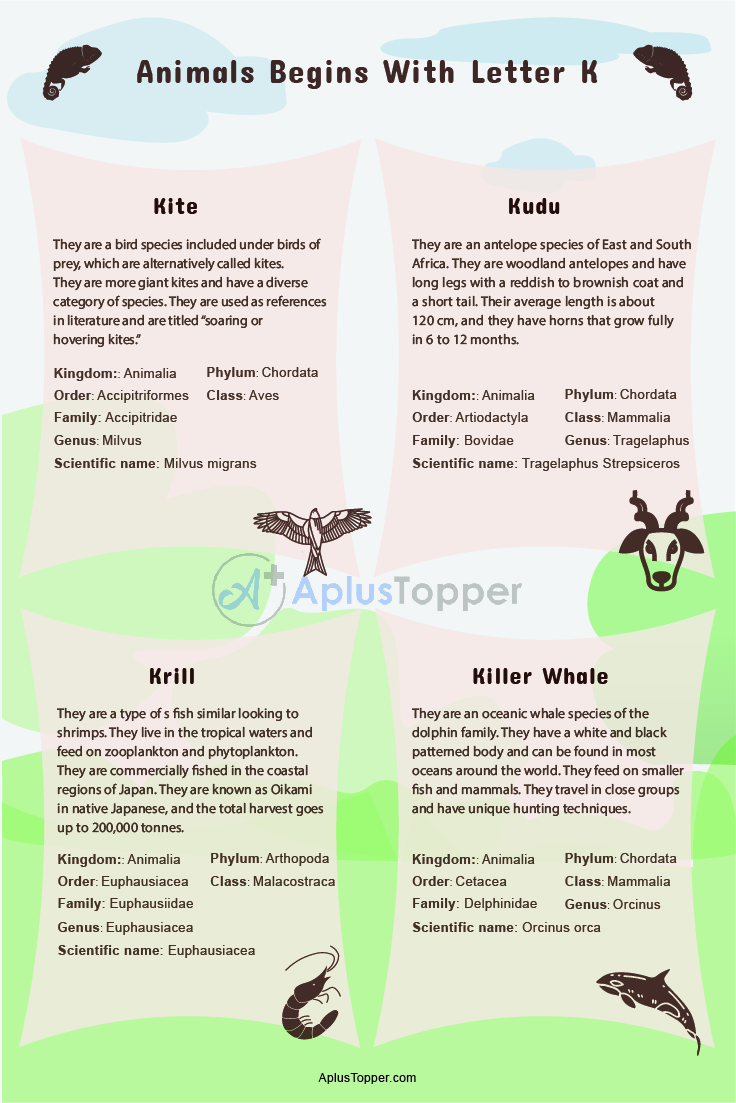 They are a flightless bird species of New Zealand. They are very similar in structure to domestic chickens. They are considered the smallest in size compared to other ratites. The kiwi bird species is listed to be vulnerable due to drastic deforestation. The weight of one egg of the kiwi bird can go up to 450 g. 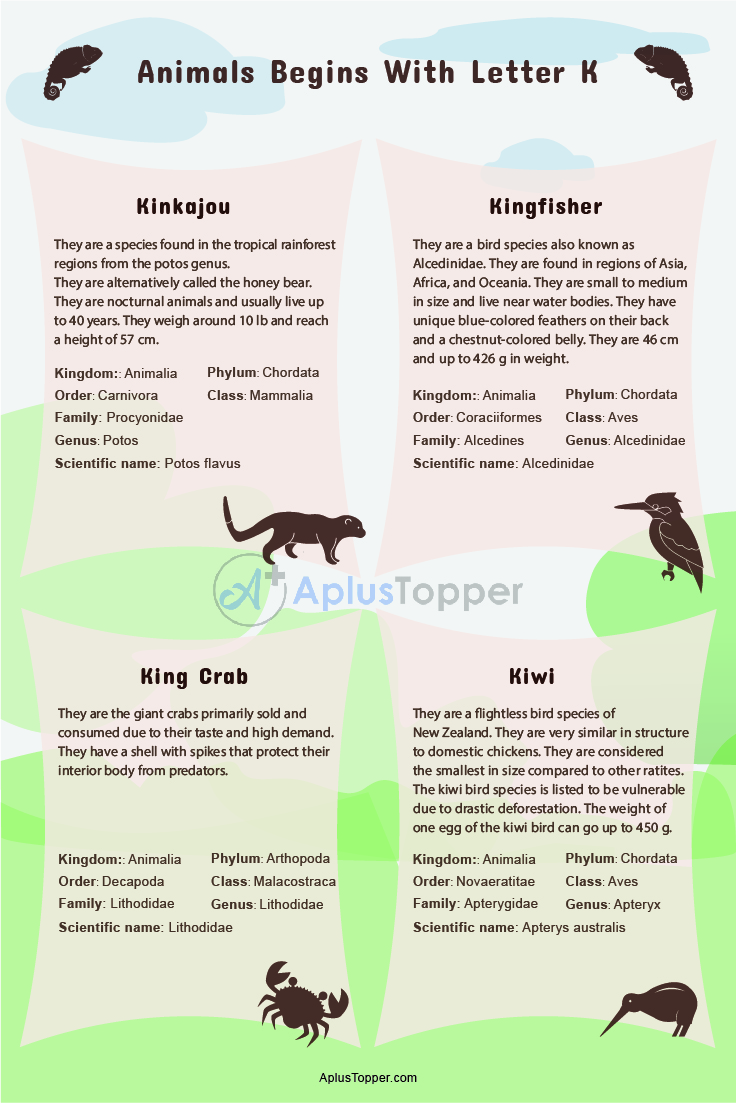 They are a mammal species of the Congo region belonging to the family of Soricidae. They primarily live in swampy or marshy areas of the Republic of Congo.

They are a bird species included under birds of prey, which are alternatively called kites. They are more giant kites and have a diverse category of species. They are used as references in literature and are titled “soaring or hovering kites.”

They are a smaller antelope species found in areas of East Africa. They are a part of six distinct subspecies. They are herbivorous animals with fawn-colored bodies and living in the Savana region. They can run up to a speed of 42 kmph. They are known to live for around five years in the wild but can be seen to survive till the age of 18 years maximum.

The knife fish is a tropical fish species that thrives in the Amazon Basin’s freshwater regions. They are called the black ghost knife fish. They have an electric organ that locates larvae while hunting at night. They can convert the electronic waves into sound to understand their motifs and strategies at play.

They are another antelope species of Africa. They are more smaller in size compared to other species. They have two horns and eight up to 18 kg. They are short-haired, coarse with reddish-brown to grey color. The mates usually stay up close between a 5 m radius to each other. They live in Rocky and rugged terrain.

They are rodent species found in areas of Central Australia. They are a vulnerable species and known as Kayer rats, bushy-tailed rats, or brush-tailed marsupial rats. They mostly live in arid grassland regions and eat insects, spiders, small lizards, or rodents. They travel in groups and breed in winter.

They are an ox species found in South-Eastern Asia. They have narrow, tall bodies, humbled backs, and long legs, covered with coarse dark black or greyish hair. Their horns are a distinguishing feature, and their weight can go up to 910 kg.

They are rodent species found in regions of Indonesia, Western Sumatra, especially the mountains Kerinci and Talakmau. They have a prolonged history, and their origin can be traced back to around 1.4 million years ago.

They are a native rabbit species found in the Korean and Chinese mountain forest areas. They live in diverse habitats and have brownish hair coats. They weigh around 2.6 kg and have a body length of around 54 cm.

They are a rodent species of Korean origin. They are found in areas of North China, Korea, Hokkaido, Russian Far East region. The average adult mouse is sized around 125 mm with a tail length nearly equal to its body. They are alternatively known as Korean wood mice.

They are a bird species of native New Guinea and Australia. They are referred to as terrestrial tree kingfishers. They have a distinct calling sound and grow between 28 to 34 cm. Their weight goes up to a maximum of 300 g. Their call names’ laughing kookaburra’ live in a diverse range of habitats, including the tropical jungles, savanna, and humid forests near water sources.

They are the members of the monitor dragon species found in the Indonesian Islands of Gill Motang, Rinca, Flores, and Komodo. They have a length of 3 m and a weight of 70 kg. They have tough and rough skin and are known to have nasty bites. They can produce up to 20 eggs and have an exceptional hunting technique different from other dragon species. They take up to 9 years to mature and live in trees to avoid predators.

They are a small leopard species of the American variant. They have been known to live in regions of Chile and Argentina. They are listed to be a vulnerable species and have a coat of brownish to greyish with black spots. They have a smaller head and thick tail with a body length of 25 cm maximum and a weight of 2.5 kg.

They are an antelope species found in the regions of Central Africa, Western and Eastern Africa. They are kept in care in Congo, Virunga National park, and Queen Elizabeth National park. They are herbivores and travel in groups. They are primarily inactive during heated days. They have an average height of 100 cm and a weight of around 94 kg. They have white eye rings and neck fur, and a brown coat throughout their body.

They are herbivorous animals residing in native Australia. They are known as koala bears and survive on tree leaves and eucalyptus. They are slow in movements and sleep for 20 plus hours a day. Their coat color varies from grey to brown. They fall under the category of vulnerable species and are protected at various places and conservation centers.

They are an endangered species of Turkmenistan. They are natives of Central Asia and are also called Transcaspian Wild Ass or Turkmenian Kulan. They weigh around 200 to 240 kg and have a pale brown colored coat with a long dark stripe down the spine. They have short tails, and their coat becomes darker during winter.

They are an antelope species of East and South Africa. They are woodland antelopes and have long legs with a reddish to brownish coat and a short tail. Their average length is about 120 cm, and they have horns that grow fully in 6 to 12 months.

They are a type of s fish similar looking to shrimps. They live in the tropical waters and feed on zooplankton and phytoplankton. They are commercially fished in the coastal regions of Japan. They are known as Oikami in native Japanese, and the total harvest goes up to 200,000 tonnes.