Animal Testing Essay: Animal Testing is a hotly debated topic in our society. Animal testing uses animals and organisms as a test subject and are exposed to clinical trials before conducting human trials. Scientists use them to determine the effectiveness of a drug or other products and see any side effects. There are two groups of people, one which strongly supports this measure, from a medical point of view, and the other, which doesn’t.

We provide children and students with essay samples on an extended essay of 500 words and a short piece of 150 words on the topic “Animal Testing” for reference.

Before implementing it on humans, animal testing is testing newly developed products and drugs on animals for the test. Many well-known brands still use animal testing, like Johnson and Johnson, Colgate, etc. Companies like these use their products on animals before selling them in the market.

Organizations have come up to prevent such behavior like People for Ethical Treatment of Animals or PETA. They discourage the practice of animal testing and animal cruelty. They also expose such actions if they see such action.

Though it is a debatable topic, it is best not to test on innocent animals. It is unethical to make animals the recipients of harmful drugs and chemicals only because they cannot protest. Testing includes brutal treatment like water deprivation, starvation, force-feeding of unhealthy and non-edible substances, pain stimulation, and other such heinous treatment. Animals have no choice but to endure the pain and slow death. It is nothing less than torture.

People use animals, and when they are too damaged, they are ‘put down’ or killed. There are animal laws or rights, and they should include the law that protects them from such treatment. Animals should have legal rights too. We should not forget that we are a part of the living organism and so are animals.

It is an unacceptable practice to use animals solely for our benefit. Many animal rights activists strongly protest this practice. All life was born equally, and we should treat all life with the same respect as any human deserves.

Apart from this, animal research is quite extensive and expensive. A large sum of funds goes to animal experiments, which are deemed to be quite useful. Though much of it is wasted since there is data repetition, some experiments yield no results.

It is ironic to spend money on torturing animals where millions still go to bed hungry. Animal testing is undoubtedly cruel and unethical. Even if some experiments yield fruitful results, where is the guarantee that it will hold for human beings? Even if an experiment is successful, how many animals will have died of starvation and torture for it? Is it worth it?

Vivisection, for example, is a type of method which involves burning, dissecting, and inflicting deep wounds into an organism. It is extremely inhumane to treat any living organism that way.

Animal testing has helped in the past to discover new and effective drugs, treatments for humans, etc. Since medicine and innovations are continuously evolving, people use more and more animals to their effectiveness. Toxic levels in some environments and biodiversity are also checked with animal testing. It is an extensive process of torture on the mute animals. Let us unite and say no to animal testing permanently.

Alternative methods of animal testing are plenty. Technology is so developed that there is no need for animal testing. A computer, for instance, can calculate if a product is effective or not. Hence, say no to animal cruelty and use cruelty-free products and drugs as much as possible. 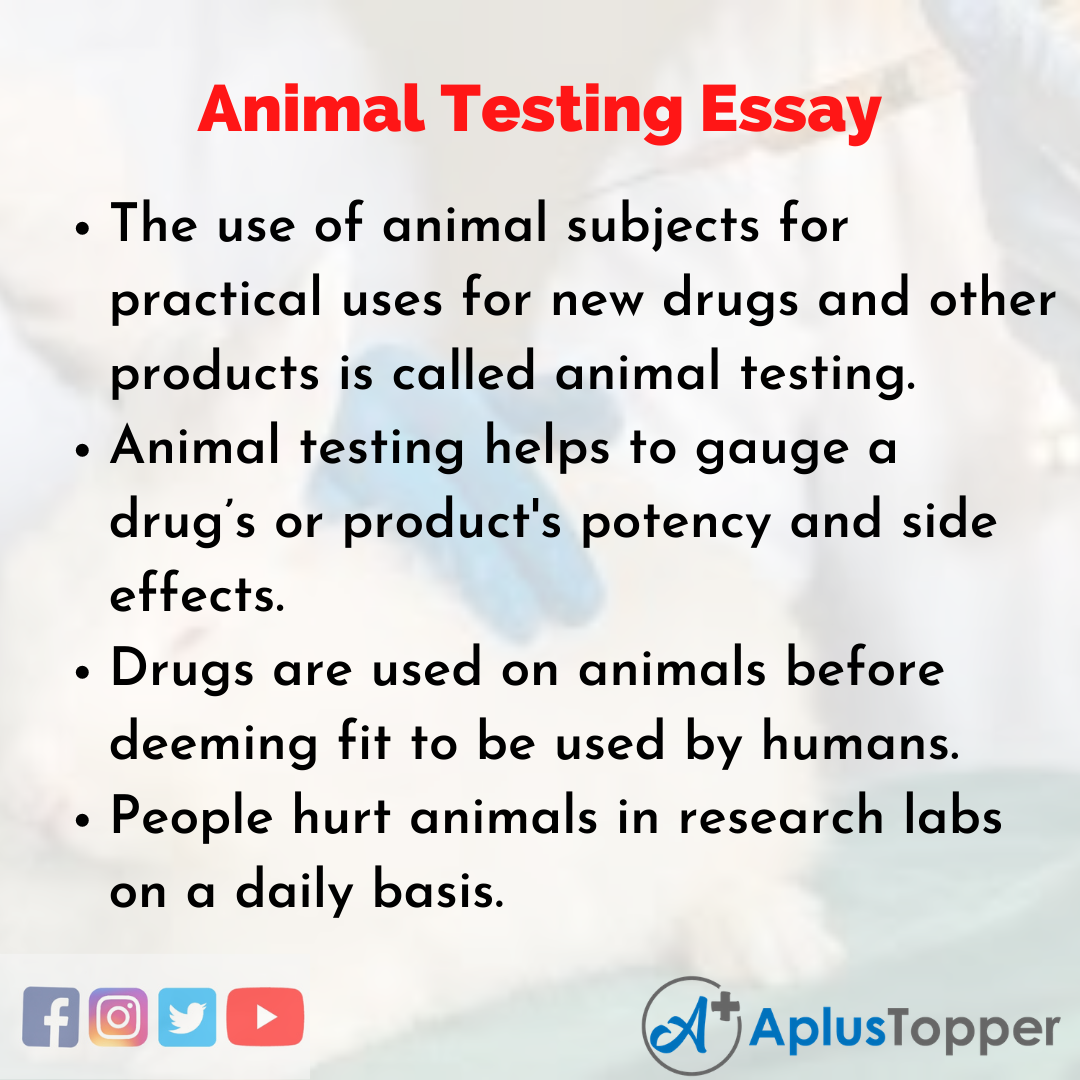 Animal testing is the practice of using newly prepared drugs and other products for humans on animals first to understand its potency and its side effects. It is true that animal testing is useful for producing new drugs and medicines. Hence, people use more and more animals and torture them in the name of humanity.

Many argue that instead of banning animal testing, they can use animals and treat them well and see that they are well-fed and fine. Truth be told, no one cares about some animals like rats to check on them.

You can now access Essay Writing on the topic Animal Testing and many more topics.

Animal rights groups are increasing, and they demand a stop to such cruel tests on innocent animals. If we cannot accept humans in testing labs getting their intestines opened, why do we allow the same to happen for animals? Let us unite and say no to animal testing and use only cruelty-free products, and show our resistance.

1. The use of animal subjects for practical uses for new drugs and other products is called animal testing.
2. Animal testing helps to gauge a drug’s or product’s potency and side effects.
3. Drugs are used on animals before deeming fit to be used by humans.
4. People hurt animals in research labs on a daily basis.
5. It is a pressing matter, and hence we need to discuss about animal testing.
6. You can buy cruelty-free products and stop using animal tested products.
7. Organizations have come up to prevent animal testing like People for Ethical Treatment of Animals or PETA.
8. It is unethical to make animals the recipients of harmful drugs and chemicals because they are unable to protest.
9. Alternative methods, like computerized testing, can potentially replace animal testing.
10. Use only cruelty-free products and save millions of innocent animals. 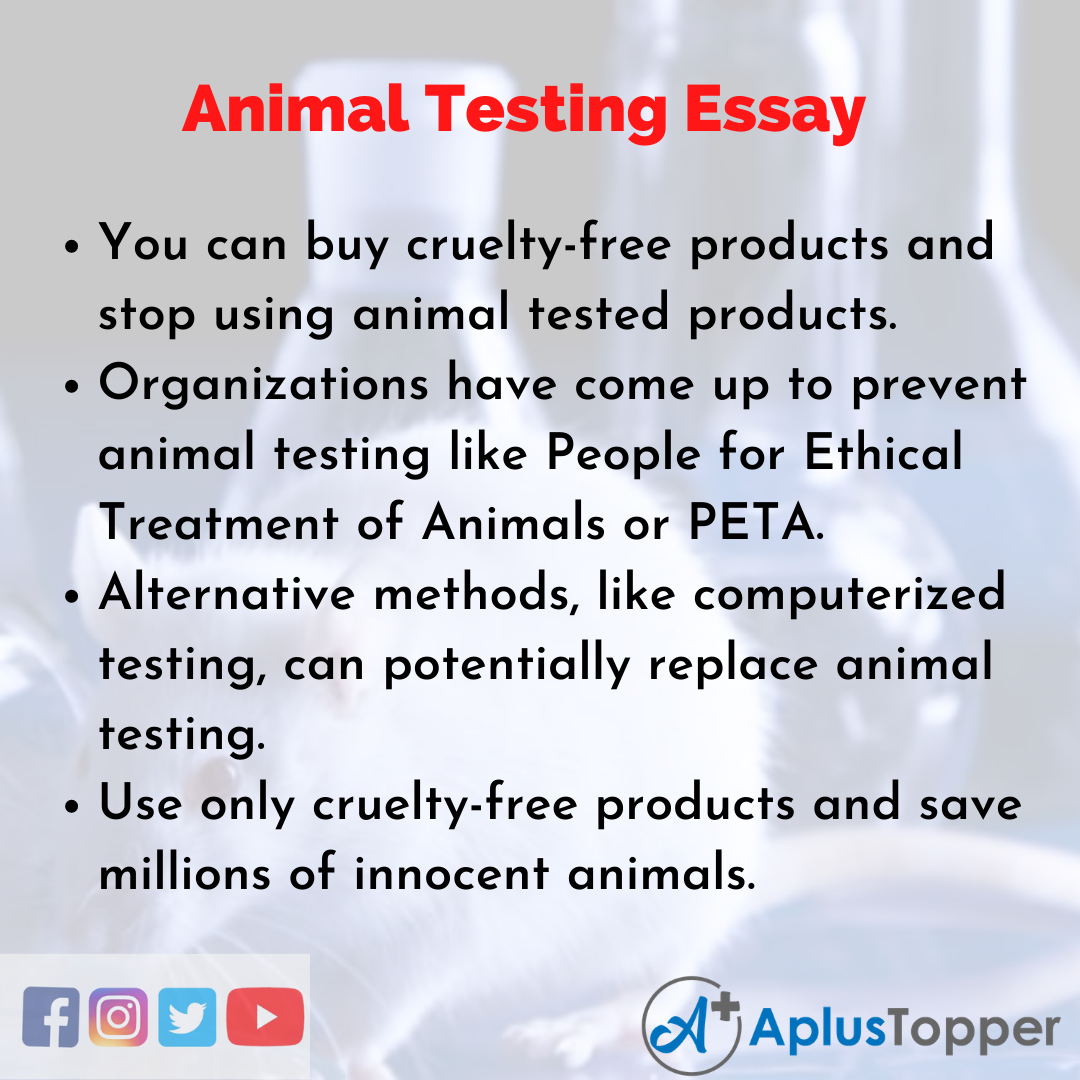 Question 1.
What is animal testing?

Answer:
Animal testing is the method of using animals as test-subjects for testing drugs and products on animals.

Question 2.
What is vivisection?

Answer:
Vivisection is the process of burning, cutting, and inflicting deep wounds on animals before using drugs on them.

Answer:
Animal testing has been useful in the past for testing drugs and producing side-effect-free products for humans.

Answer:
Though animal testing has been useful in the past, technology has surpassed such experimental needs. Mechanical stimulation can replace animal testing, hence it is not relevant.