Ambedkar Jayanti Essay: April 14, 1892, the birthdate of Dr. Babasaheb Ambedkar is also celebrated as Ambedkar Jayanti, a tribute for his contribution to the country. All his life, he worked diligently towards the betterment of Dalits in the country.

While doing so he emphasized Dalits getting equivalent rights as the rest of the citizens in the country. With a degree in pollical science, law, and economics, he was indeed one of the first members from the Dalit society back then to have achieved such higher education. Though Dr. Babasaheb Ambedkar was born in Madhya Pradesh, Ambedkar Jayanti is fondly celebrated in Maharashtra for his great efforts to uplift the society.

The ignominy and discrimination that he faced throughout since a child did not stop him from achieving great things in life both personally and professionally. Apart from being a victorious economist he also became an Indian Jurist. It did not stop here, along with flourishing academically Dr. Babasaheb Ambedkar went on to become a significant political leader and a great philosopher.

The efforts and energy he had put in for the furtherance of the Dalit community make him stand out from the rest of the leaders and thus, his birthday is celebrated all over the country and is marked as a public holiday.

Dr. Babasaheb Ambedkar motivated people to join him in the amelioration of society by participating in various movements. One of the striking movements was when he led the Dalit community on a march towards drinking water bodies as the community was denied access to it. People never questioned his actions and still follow the principles laid down by him.

Jayanti’s are often celebrated after the demise of a human being but the craze of Dr. Babasaheb Ambedkar was so much that “Ambedkar Jayanti” is being celebrated since he was just 37 years old. April 14, 1928, is when his first Jayanti was celebrated by his fervent follower named Janardhan Sadashiv Ranapisay. Dr. B.R. Ambedkar Essay was a major influence in transforming the way India looks at socio-economic policies today.

In his 100th year a considerable size statue was held up on the centre hall of the parliament and this year was also marked as a year of social justice for the work Dr. Babasaheb Ambedkar offered in the Indian society.

India and its citizens hold great pride for those years when the United Nations celebrated Ambedkar Jayanti for three years straight in a row i.e. from 2016 to 2018. Ambedkar Jayanti is passionately celebrated in Chaityabhoomi, Mumbai where Dr. Babasaheb Ambedkar’s last rituals were performed and in Deekshabhoomi, in Nagpur.

Both these locations are situated in the state of Maharashtra. Ambedkar Jayanti is celebrated for around a week in the Chaityabhoomi and numerous people from all over the country are seen in Mumbai for the same. Exclusive travel arrangements are made from the Government of India for the devotees to travel and reach the desired destination. People also carry processions in his memory.

Deekshabhoomi, a sacred monument in Nagpur is the place where Dr. Babasaheb Ambedkar changed his religion and adopted Buddhism along with approximately 6 lakh followers. This massive event occurred on October 14, 1956. People start visiting Buddhist centres from 5 am onwards to pay tribute to the leader who paved the way for their bright future. The Prime minister along with other Cabinet members lay flowers in the parliaments centre hall on the day of Ambedkar Jayanti. It is a tradition that has been followed for years in the country. 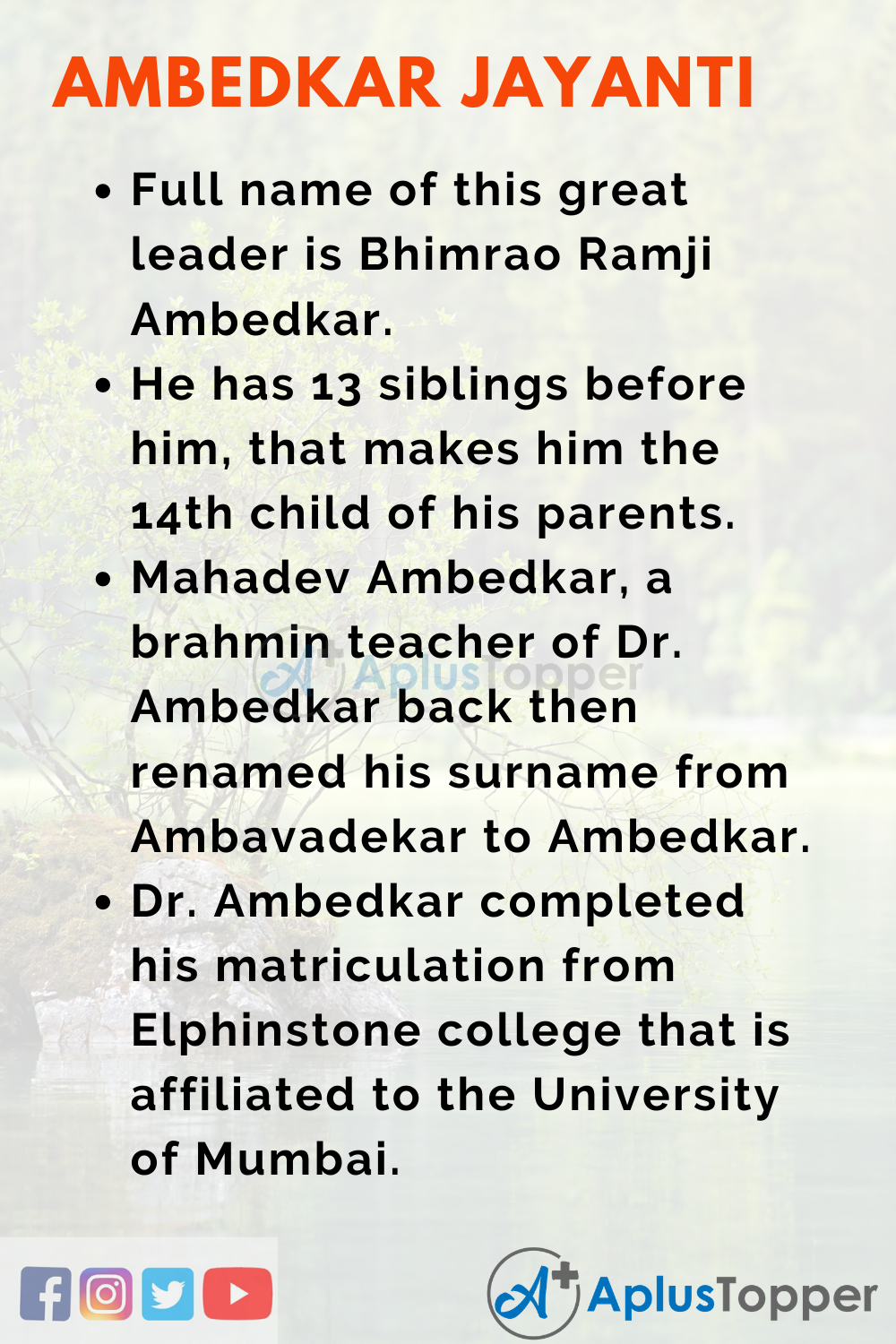 As Ambedkar Jayanti is declared as a national holiday, schools often celebrate it one day in advance. The teachers organize events for the students, for them to know about him and his practices that helped Dalit society get their rights and how it enhanced their standard of living. Such events in various schools begin with a speech highlighting Dr. Babasaheb Ambedkar’s birthdate and his accomplishments and are often delivered to the students by the principal or the director.

The theme behind organizing events in schools is to let students know how Dr. Babasaheb Ambedkar struggled throughout his life and transpired as a winner and a leader to all the citizens of the country. His story is told to inspire students and let them know to not leave the battle before they have won it. Government schools that have a majority of Dalit students hold this event without fail for they have to face a similar struggle that was seen by Dr. Babasaheb Ambedkar when he was young. 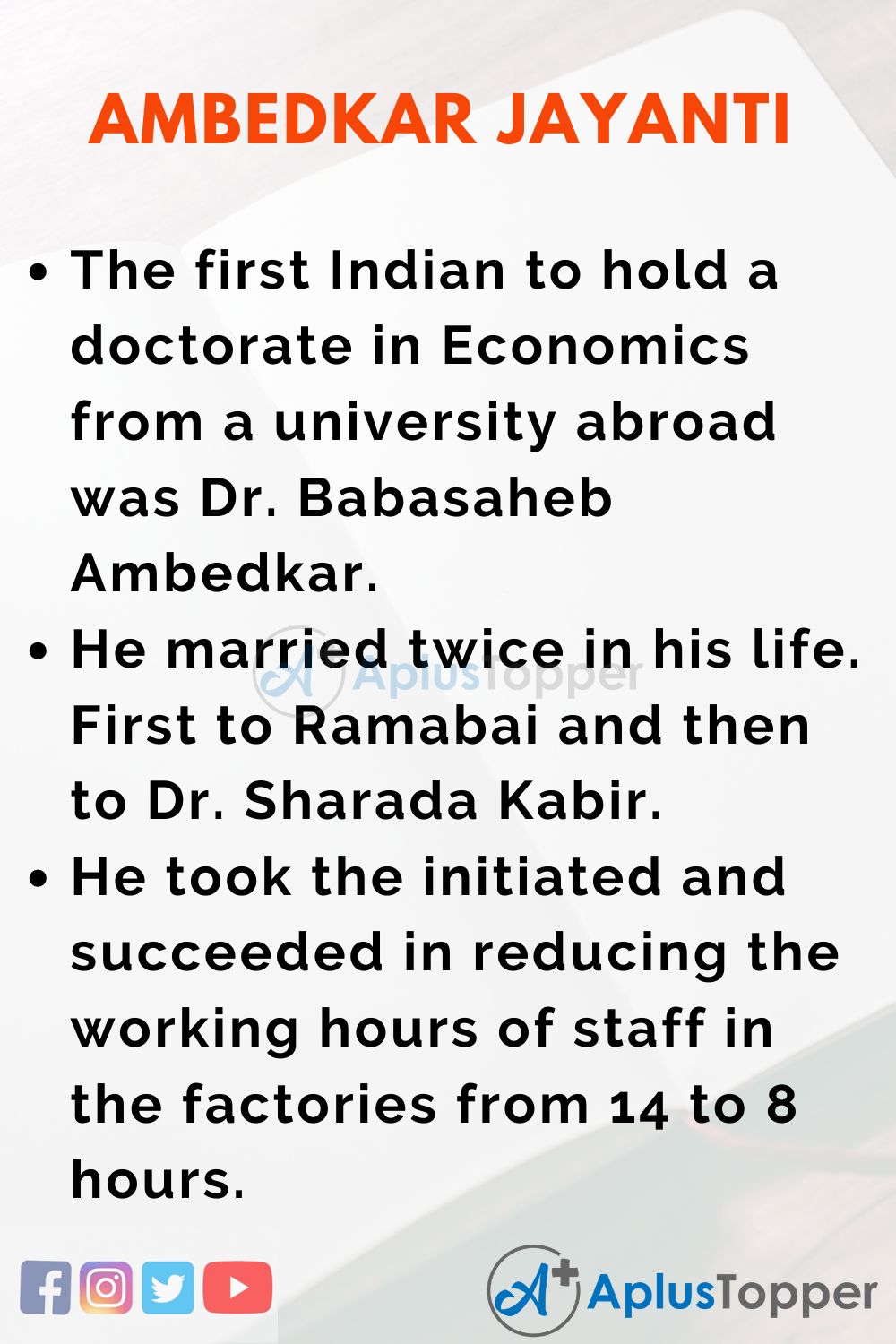 Answer:
It was a satyagraha held in Mahad, Maharashtra where he was followed by the Dalit community towards the water bodies. This took place 3 years before Gandhiji’s Dandi March.

Question 2.
Why Dr. Ambedkar opposed the implementation of Article 370 in the constitution?

Answer:
Article 370 would break the objective of united India and hence, he opposed it. It was then drafted by Gopalswamy Ayyangar.

Question 3.
How did Dr. Ambedkar pass away?

Answer:
He suffered from diabetes and was bedridden for almost two years after which he passed away on December 6, 1956.

Question 4.
When was Dr. Ambedkar awarded with Bharat Ratna?