Alzheimer’s Disease Essay: Alzheimer’s disease is a degenerative disorder which slowly leads to memory loss in a person. It damages the brain tissues and is a form of dementia. It ultimately damages the human brain.

It occurs in the later years of life and is seen in middle-aged and older people at the late 65s. There is no such cure to this disease, but medication often helps to improve the condition.

We are providing students with essay samples on a long essay of 500 words and a short essay of 150 words on the topic Alzheimer’s Disease for reference.

A German neurologist named Alois Alzheimer discovered Alzheimer’s disease in 1906 after studying the case of a middle-aged woman named Auguste D. After her death he found senile plaques and neurofibrillary tangles as he did an autopsy. Alzheimer’s disease or AD is a form of dementia which leads to the loss of a person’s ability to think and reason. It destroys the memory as neurons are injured and die throughout the brain resulting in a break down in the connections between networks of neurons. Major brain regions begin to shrink. By the final stages of Alzheimer’s significant loss of brain volume is seen, which is called brain atrophy.

The most crucial symptom of Alzheimer’s is memory loss, and the person faces difficulties in remembering. It also leads to occasional memory lapses. An Alzheimer’s patient often gets lost in familiar places and also does not find the right word to identify objects and often tends to forget close relatives and family members.

Alzheimer’s reduce the ability of thinking and reasoning considerably, and the person fails to make decisions or proper judgements. As the disease progresses, the patient often forgets to perform familiar tasks or even the basic tasks like bathing or dressing. An Alzheimer’s patient undergoes many behavioural and personality changes like depression, delusion and mood swings are prevalent. Distrust, social withdrawal, changes in sleeping patterns and aggressiveness also occur.

Alzheimer’s is caused by a combination of genetics, lifestyle and environmental factors over time though the exact reason causing Alzheimer’s is yet to be found. The problems with brain proteins disrupt the proper functioning of the brain cells and eventually die out, resulting in a loss of significant portions of the brain.

The human brain is characterised by amyloid plaques and neurofibrillary tangles caused by significant brain degeneration due to Alzheimer’s. A leftover fragment of a larger protein called beta-amyloid, and its clustering have a toxic effect on neurons, and it disrupts the cell-to-cell communication. Neurofibrillary tangles are abnormal accumulations of a protein called tau that collects inside neurons. Apart from these, chronic inflammations, vascular problems and cell death re major characteristics of Alzheimer’s.

The early symptoms include mild forgetfulness, anxiety, confusion about time and place, communication difficulties and loss of spontaneity and initiative. Toward the progress of this disease, short term memory loss and confusion increase with a shorter span of attention and severe forgetfulness and even recognising family members. In the last stage, the inability to understand, incontinency and failure to recognise self or family are common.

A thorough diagnosis of an Alzheimer’s patient is made by assessing the assessing a person’s medical and psychiatric history and brain scans. CT, MRI and PET scans are done to determine the level of mental deterioration. Apart from these, blood and urine tests are also done along with proper neurological and physical examinations. 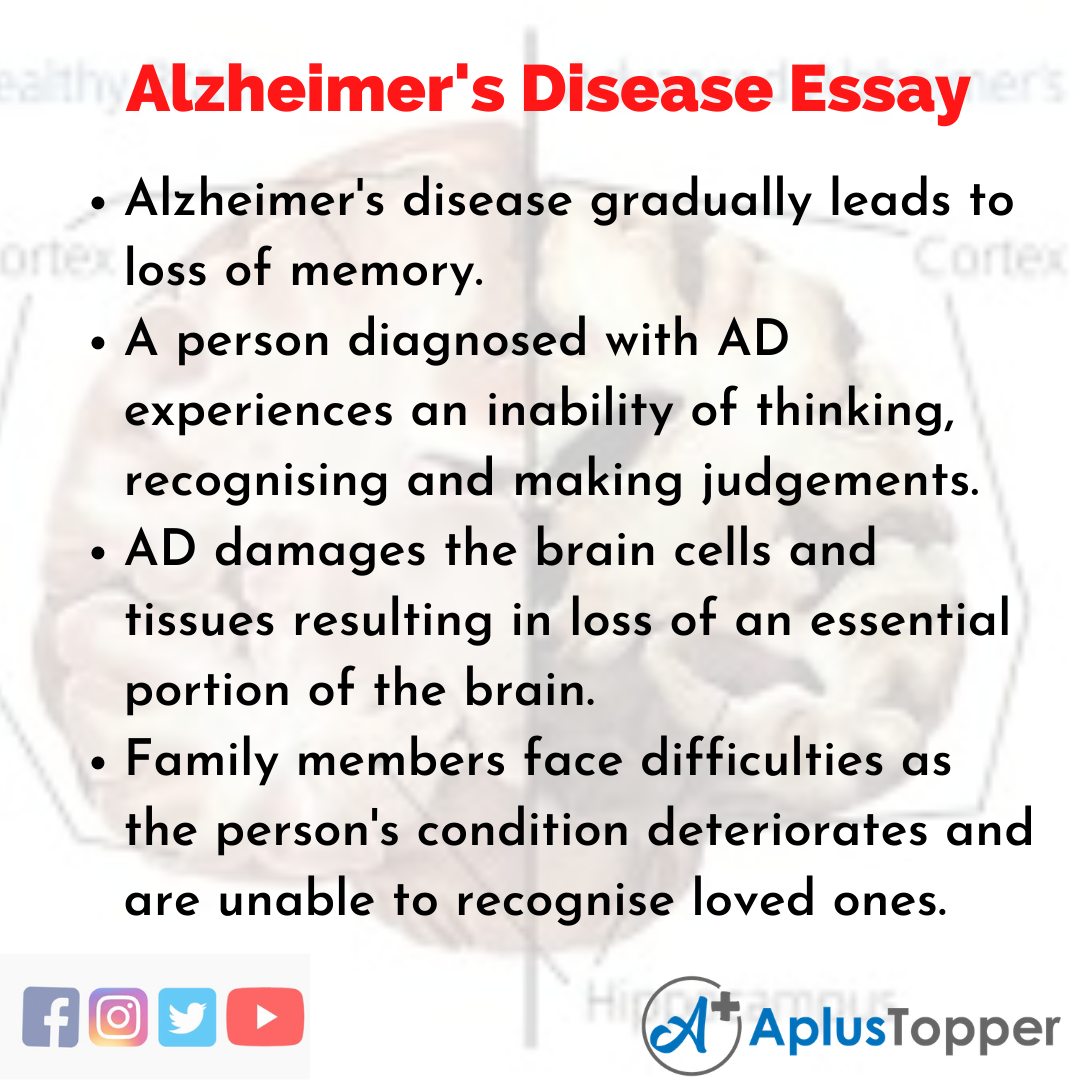 Alois Alzheimer first found the symptoms of Alzheimer’s Disease (AD) after studying the case of a 51 years old woman. He found out destructions in brain cells and rapid degeneration of the brain. AD tends to damage the human brain entirely with significant memory loss and an inability to recognise self and close family members. AD is also associated with aggressiveness, restlessness, mental trauma, insomnia and severe depression.

Beta-amyloid plaques and neurofibrillary tangles in the brain are significant causes for brain damage and subsequent loss of memory. A build-up of glial cells, vascular issues like atherosclerosis and considerable damage in the brain cells are equally responsible for AD. Although a person undergoes all types of brain scans, there is no cure for AD or any proven way for prevention. Treatments improve the behavioural patterns and manage symptoms to maximise a person’s ability to carry out daily activities and tasks so that they maintain their independence for as long as possible.

10 Lines on Alzheimer’s Disease in English 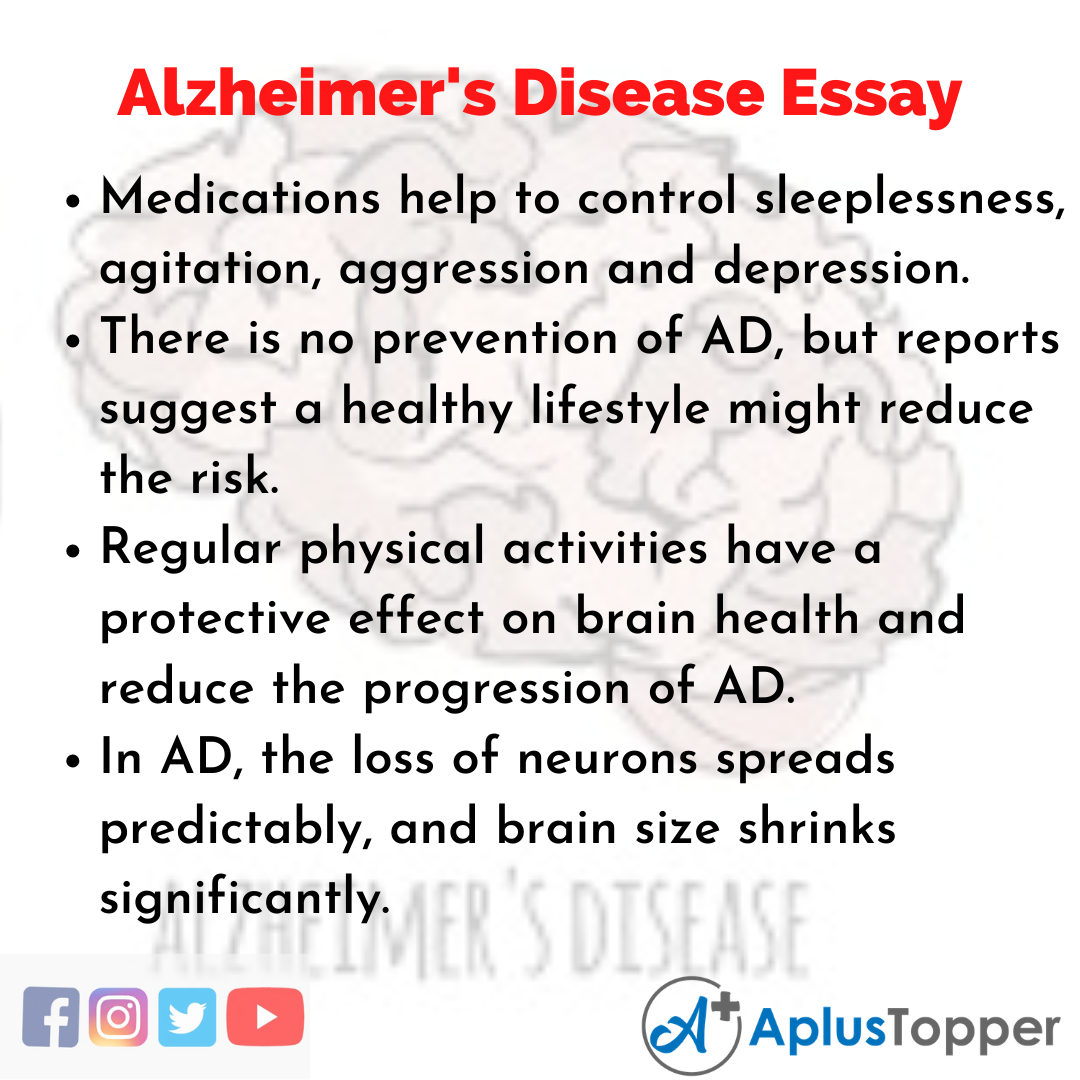 Question 1.
What are the causes of AD?

Answer:
The exact causes of AD are not known, but problems with brain proteins that fail to function normally, disrupt the work of neurons and results in a series of toxic events.

Question 2.
How to prevent AD?

Answer:
There is no prevention to AD, but proper lifestyle might reduce the risk.

Question 3.
What are medicines used in cases of AD?

Answer:
Mostly, anti-depressants and sleeping pills are used to improve the sleep pattern because this disease cannot be cured.