Affirmative Action Essay: The most vital and crucial social policy choices taken up by the United States over the years are referred to as affirmative action. This topic has been widely famous for both research papers and other writings. This was initially developed to correct racial discrimination.

There was a phase where affirmative action was considered highly important for African Americans to search for their space in employment or educational areas. However, its purposes have changed over the years. Now affirmative action is a type of regulation that only restricts the system flexibility in several ways.

We are providing students with essay samples on a long essay of 500 words and a short essay of 150 words on the topic of Affirmative Action for reference.

Long Essay on Affirmative Action is usually given to classes 7, 8, 9, and 10.

The optimistic steps that are chosen to enhance minorities and women in specific areas are referred to as affirmative action. These areas include education, culture, employment, etc. They were removed in the past. These steps are used to add the people back in those areas based on ethnicity, gender, and race.

There are two methods in which the growth, defence, and controversy of preferential affirmative action have progressed. One of these methods includes legal, i.e., courts, executive sectors, a government and legislature that have created and implemented rules needing affirmative action. The other process consists of public debate, where the special treatment has developed enormous literature, pro, and con. However, both ways frequently fail to make a sufficient link since the public argument is rarely safe in any existing practice.

The widely famous problem in society was known to be affirmative action back in 1972. Whereas, in 1964, there was already a thing known as “affirmative action,” the solution that could be used by the federal courts on the culprits of the act. The federal contractors were then subjected to Lyndon Johnson’s Executive Order after the year 1965.

The preference usage was highly defended in the essays written by Nagel and Thomas but individually. Thomson demanded the job opportunities or preferences for both the African American and women as a form of correction for removing them from the grounds of employment and academic. From her point of view, preferential policies were a type of justice. However, Nagel stated that the preferences might bring a significant change in society without harming justice. Besides, it will also help the institutions leave behind the meritocratic basis of criteria.

Justice was the primary part of the following arguments. Numerous writers started questioning the statements made by Thomson in her essay. The preferential method can be seen as an advantage for several individuals, including women and African Americans that are probably not harmed by past mistakes. However, it can also damage the white individuals that are not related or responsible for past issues.

Rather than bringing justice, rights are violated through the preferential method. Equality was mainly affected by it. Therefore, some continuous arguments and debates occurred on the topic of preferential selection. Besides, many writers claimed that whites’ benefits could be neutralized with the use of racial preferences.

It also resulted in reverse discrimination or segregation. Several writers stated that if the schools and organizations begin preferring women and blacks, it will do a similar injustice like the one being imposed. Identical to past discrimination, this kind of discrimination is also considered illegal according to the law and public equality.

Besides, many writers also believed that racial preference was ridiculous. Since it promoted racial equality and claimed that races do not matter, racial bias was considered illogical. Therefore, several discriminations and arguments were raised due to affirmation action. 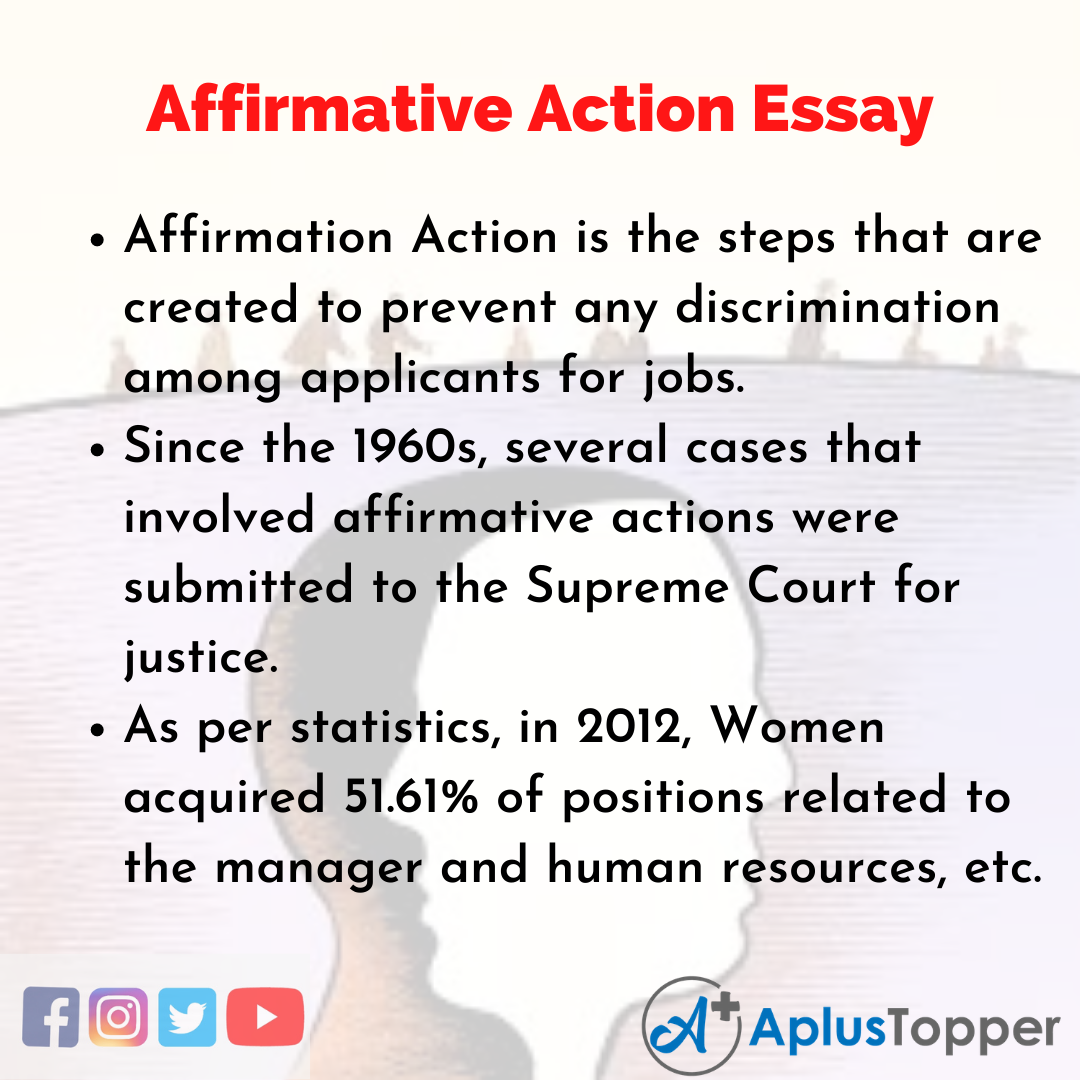 The series of methods and policies involving groups in areas they were excluded from depending on their gender, creed, or race is known as affirmative action.

In other words, it is the addition of the people in the parts from where they were removed in the past. It includes areas like employment and education. Besides, affirmative action originally meant the steps implemented to enhance the minority and women’s image in several areas, including education and employment.

Affirmative action eventually gained the support of the minority groups due to several objectives sought by it. For instance, they were removing employment inequalities, enhancing the availability of education, correcting the wrongs in the past, etc.

The affirmative action and its nature commonly differ from one place to the other. For example, it is not legal to employ an individual mainly due to their status as a protected group in the US.

10 Lines on Affirmative Action in English 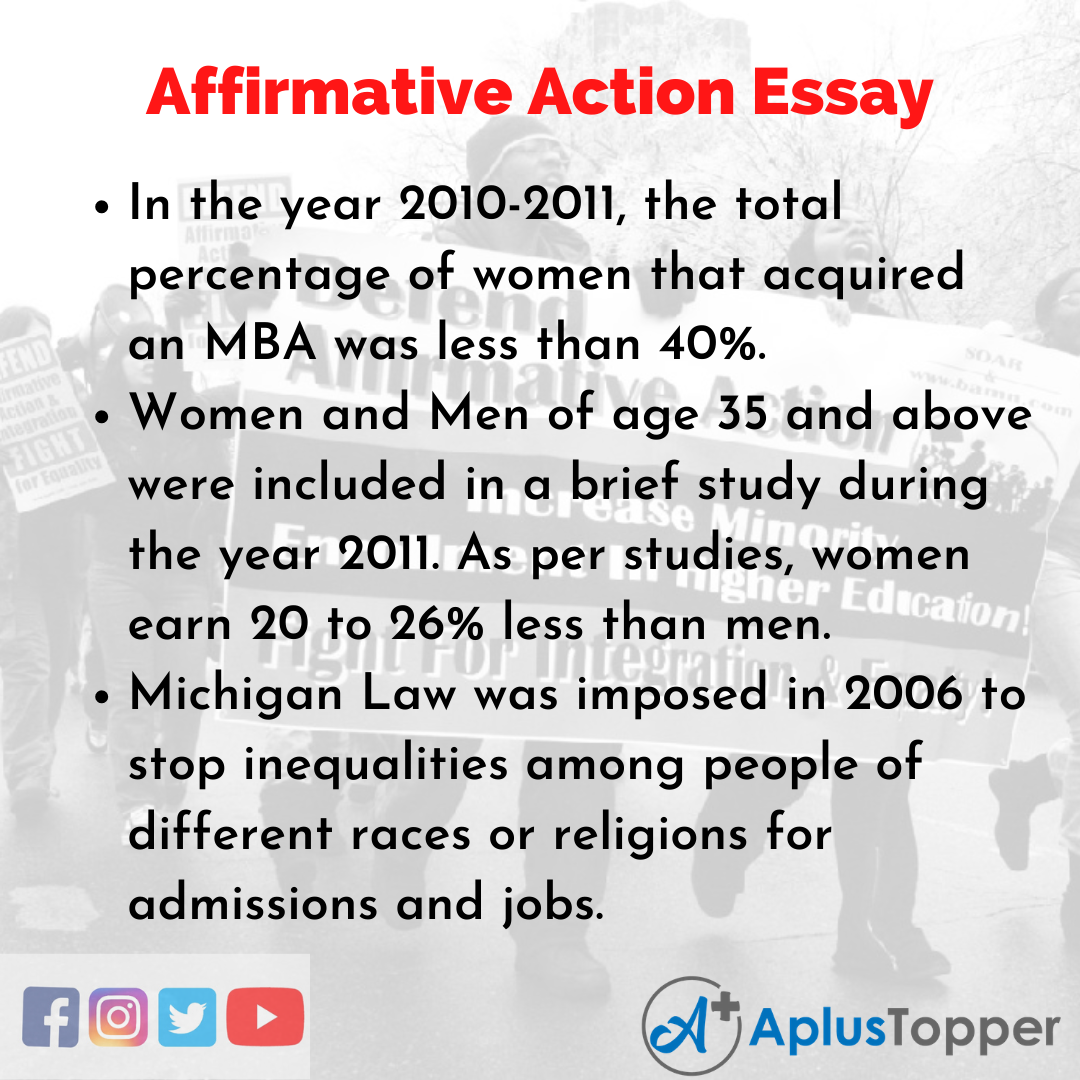 Question 1.
What is the necessity of affirmative action?

Answer:
This has received massive support from the minority of the society to fulfil aims like social equality in races, employment, wages, etc.

Question 2.
What are the few examples of affirmative actions?

Answer:
Few examples of affirmative actions are targeted recruitment, worker support campaigns, and so on.

Question 3.
What is the vital characteristic of affirmative action?

Answer:
It indicates the enhancement of job options for individuals excluded from it in the past based on sex, gender, colour, and race.

Question 4.
When did the affirmative action begin?