Adolescence Essay: Adolescence is the phase of transition between childhood and adulthood. It involves the physical and psychological growth and development of a person during the puberty period and is usually marked by the teenage years. The ages between 10 to 24 are generally said to be adolescence period.

During this period, the changes are associated with new risks and opportunities and are responsible for the positive and negative influences in a person’s behaviour and mindset.

We provide students with essay samples on a long essay of 500 words and a short essay of 150 words on the topic Adolescence for reference.

Adolescence is defined as the age of transformation of an individual from childhood to adulthood. The physical and psychological development and cultural expressions can start early or end later during this phase.

Adolescence starts with puberty, and bodily changes are observed during these years. In this phase, for both genders, there is a rapid increase of height and a development of sexual glands and adrenal glands with hormonal changes. The development of facial hair and deepening of voice is seen in boys. In girls, there is a development in breasts and hips at the beginning of the menstrual cycle. In these years, the bodily changes are very distinctive.

Besides, there are changes in the characteristics of the brain. The amygdala processes stress and related emotions and affect instinctual reactions and reflexes. The frontal cortex also develops, which is responsible for rational thinking, morals, judgments, and self-control. These start to develop at the onset of the adolescence period and develop over the years.

Young people experiencing the adolescence phase are exposed to various social, psychological, and behavioural changes. Individuals learn about their orientation, experience an emergence of abstract thinking and introspection. They get an idea about values, skills, coping capabilities, and the importance of a family and its values.

Various psychiatric disorders are associated with adolescence. Young girls are at greater risk for sexual and substance abuse, depression and anxiety, and sleeping and eating disorders. Boys experience a source of pride and embarrassment and various changes in their mentality, both good and bad.

In the adolescent years, there is overall cognitive development. Improvements can be observed in selective and divided attention. Both working and long-term memory are developed. The speed of registering things and self-analysis increases with self-thinking and social insight with a developed knowledge of themselves. However, there are some social constraints associated with adolescence. The social structure and stereotypical mindset often influence the mentality of a young individual. They develop resilience and are also influenced by radical and divergent ideas and changes within society.

Social developments include maintaining and developing an identity, along with cultural and belief developments. There is a sense of self-awareness and awareness towards others living in the same society. The lifestyle of an adolescent is determined by their assigned roles in the family or society in general.

Young people experiencing adolescence are often involved in physical activities like sports, dance, drama, etc., and try to find their field of interest. They find these pleasurable and gratifying. But due to academic and societal pressure, most of them cannot participate in these activities. Although very important, extra-curricular activities have been curtailed these days, restricting the individual to find exposure. The increasingly important teenagers became a driving force in music, tv shows, movies, and styling during the 1950s in many countries. In many countries, World War II’s effect has been an economic boom where teenagers used to spend money freely. In these affluent countries, teenagers have very few meaningful responsibilities, whereas, in underdeveloped countries, the young generation struggles to survive. 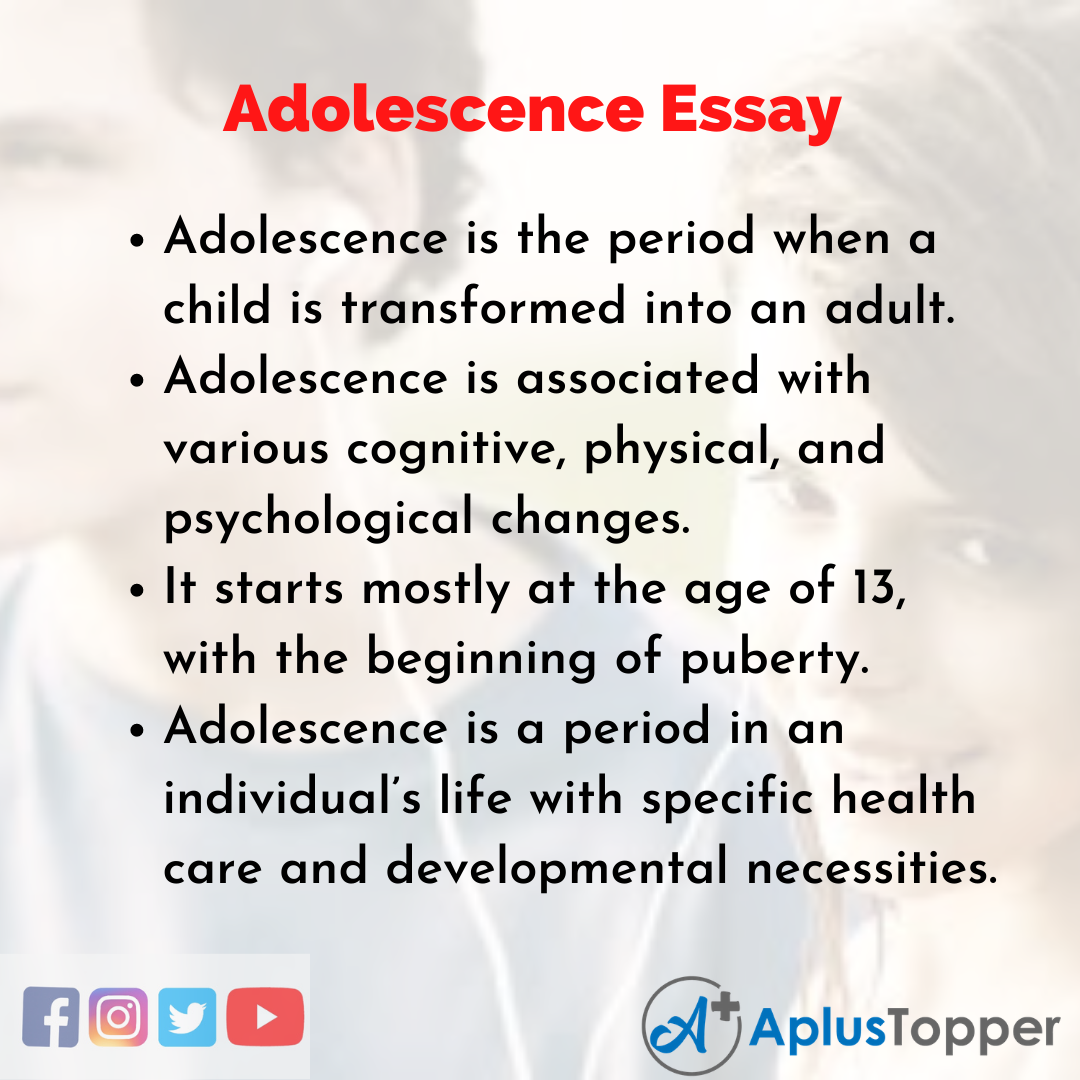 Adolescence is the transition between childhood to adulthood. It involves a lot of physical, psychological, and behavioural changes. Adolescence years start with puberty. In girls, it starts at the age of 12 or 13, whereas in boys it varies from 13-15 years. Physical changes are very prominent in these years.

Adolescence and puberty have psychological and social consequences. The most important of which is looking for self-identity and improvements in cognitive abilities. Psychological changes include the development of strong viewpoints and a mentality. Social changes include self-awareness and maintaining the identity in the society a person lives in.

Generally, the years 13 -18 in an individual’s life is a period of self-discovery, confusion, and stress. During this period, a person explores his/her ability to think and act independently to survive these adolescent years.

These are the years determining how a person would turn out in the future as derived from their psychological and behavioural characteristics. They are exposed to both positive and negative influences during this period. In a few cases, adolescents chose the negative path, whereas some cannot take the mental pressure or bear with the social phobias.

10 Lines on Adolescence in English 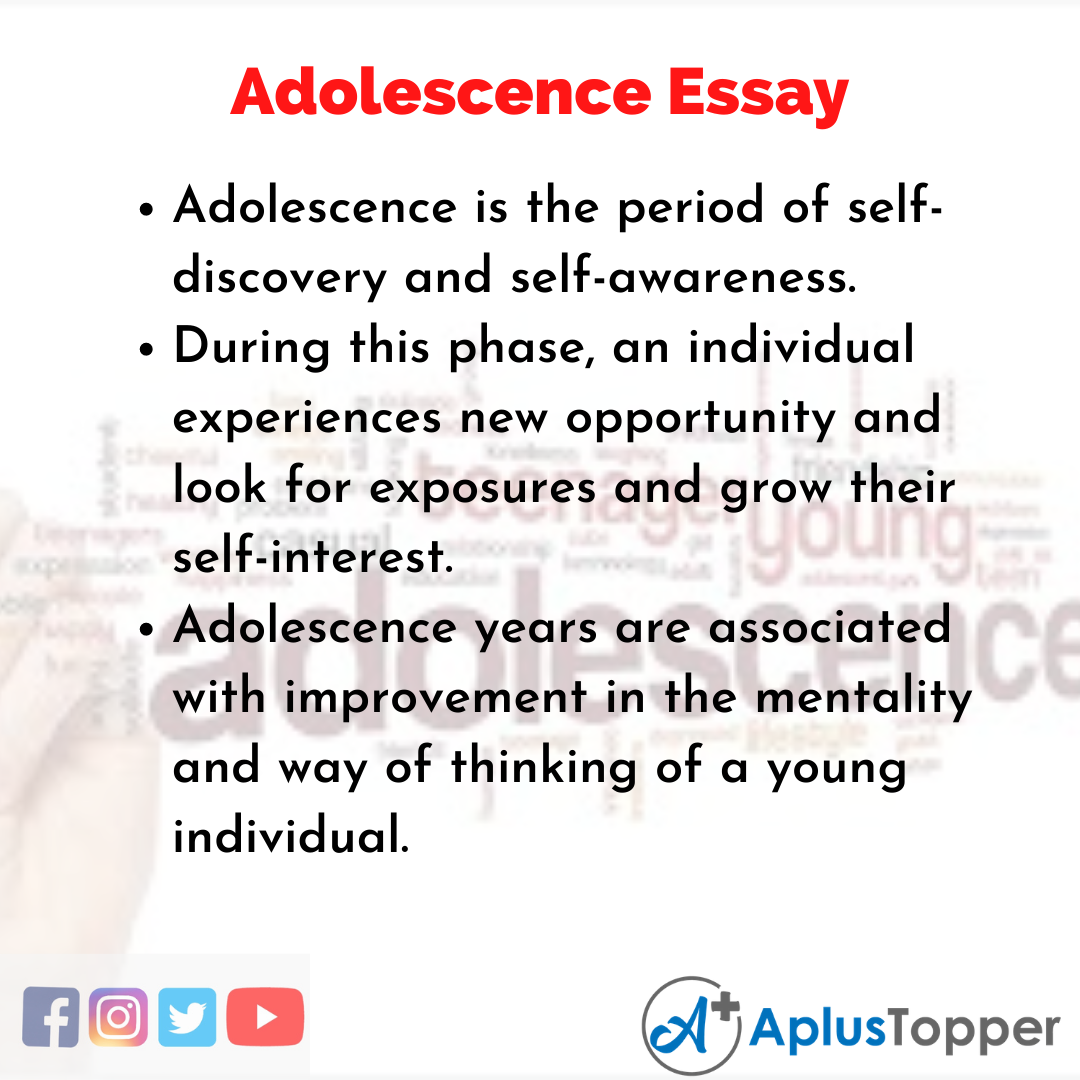 Question 1.
What is the actual age of adolescence?

Answer:
On average, the adolescence period starts with puberty at the age of 13-14 and continues till 24.

Question 2.
What are the changes that occur in a person during adolescent years?

Answer:
During adolescence, a person undergoes different physical, behavioural, and psychological changes that shape the individual.

Question 3.
What are the cognitive developments that occur during adolescence?