Action Speak Louder than Words Essay: Many sayings in English hold a lot of value. “Action Speaks Louder than Words” is one such proverb that is wise and is useful in various instances. This proverb has a very deep meaning to it which would help an individual to achieve his or her dreams in their life.

In simplest of terms, this proverb means that no matter what you speak, but your actions and doings will have a far greater impact.

We are providing students with essay samples on a long essay of 500 words and a short essay of 150 words on the topic “Action Speak Louder Than Words” for reference.

Long Essay on Action Speak Louder than Words Essay is usually given to classes 7, 8, 9, and 10.

This age-old proverb has a beautiful message to convey. One who boasts about his work lacks determination. But the one who lets his or her work do the talking, then that person is the determined one. The performance and action of every person have a lot more strength than mere words.

We all are in the habit of making new year resolutions. More than often, most of us fail to achieve what we committed for, and are more prone to follow the sluggish course of work. We forget our goals and do not take action on the words that we have spoken.

The people who let their action do the talking are more often trustworthy people. The action they take helps build the trust of the people near them. The most accurate example of this statement can be when a child learns from their parents. It is the actions that they learn and not the words. For building any form of relationship, trust is extremely important.

For commitment to goals, many people make mere claims. But these goals will not be fulfilled by words, but they require action. Parenting makes this statement very clear. Kids get well aware that their parents make false promises. If there is no action to the promise made by their parents, then kids also stop trusting their parents.

Mahatma Gandhi, who is a well-known figure not only in India but all around the world, contributed much to the Indian freedom struggle with his actions. His concepts of non-violence, civil disobedience, non-cooperation, farmer support are still very much popular today. He made his contribution to his actions, not words.

Another popular example is the soldiers of any country. The soldiers risk their lives only for the sake of their country. They sacrifice their lives for the national security. They work selflessly, have no desire for fame. There are not many soldiers whose names are even known.

We have all heard the name of Rosa Parks, who contributed to the movement against racial discrimination, through the Montgomery Bus Incident. It was a very important movement that took place in America. The actions that were taken by her made her a role model in the later years.

The then America had very harsh rules for black people, who had to travel in separate buses, studied in separate schools. When she was asked to sacrifice her seat for a white man, she denied. This action marked the beginning of the civil rights movement against racial discrimination.

There are many ways in which we can ensure we do exactly what we say. We should make only those promises that we can keep. We should start accepting our mistakes. These are the two most effective ways. 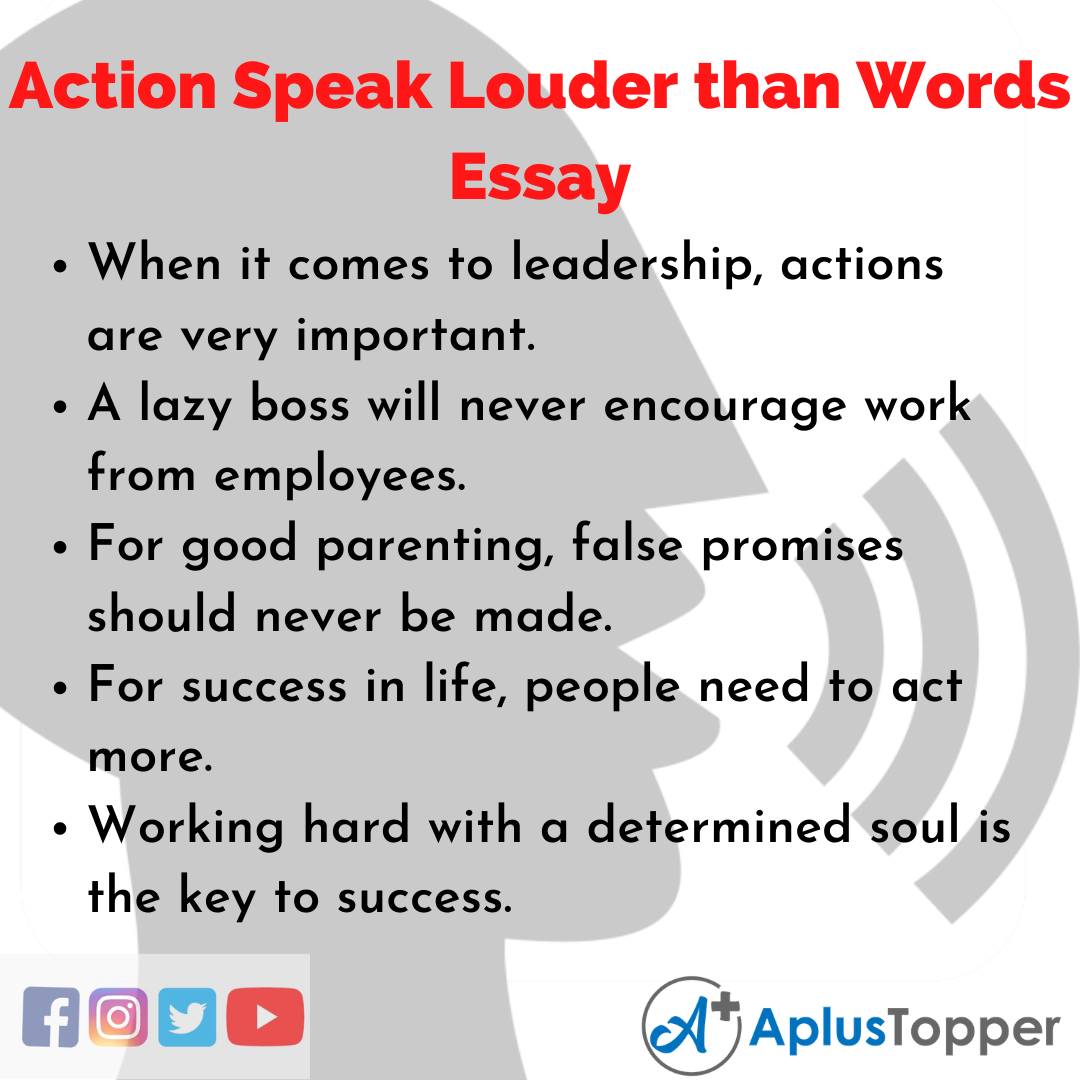 From our childhood, we have grown up learning many golden sayings that are full of wisdom. This proverb is also one among those. This proverb signifies the importance of what we should do, instead of simply saying that we will do.

The habit of building castles in the air is a bad one, as that makes us prone to committing to false promises. What one should do is take a step ahead and work hard to achieve one’s goals. There is no need for someone to boast about their work; if their work deserves recognition, then it will surely receive so one day.

There are only two obstacles in the path of achievement that any person has to overcome: ego and pride. If we are determined to see a change, then we must pledge to be that change first. We should always be ready to face the consequences of our work, and we should never back away from accepting our mistakes.

10 Lines on Action Speak Louder than Words Essay in English

1. When it comes to leadership, actions are very important.
2. A lazy boss will never encourage work from employees.
3. For good parenting, false promises should never be made.
4. For success in life, people need to act more.
5. Working hard with a determined soul is the key to success.
6. The most suitable example of a good action is Rosa Parks.
7. A resolution goes to waste if it is not backed by action.
8. For a nation to progress, people need to work hard.
9. Come out of your comfort zone and take action.
10. Usain Bolt never only spoke of running but did it. Question 1.
Is it important to act on promises?

Answer:
Yes, it is extremely important, especially to your loved and close ones. Doing so will make you a trustworthy person.

Question 2.
Why are soldiers important?

Answer:
Soldiers are important to a nation for different reasons, but doing their duty to the nation tops the list.

Question 3.
How to fulfil our resolutions?

Answer:
The only way to fulfil the resolution is to get out of your comfort zone and take some action for the promise you made to yourself.

Question 4.
How to build trust?

Answer:
For building trust in a relationship with your near and dear ones, try to back your words with actions of equal effort.