A Raisin in the Sun Essay: Lorraine Hansberry wrote the play, A Raisin In The Sun. It received its first debut on Broadway in the year 1959. The play tells the experiences of a black family residing in south Chicago.

They have seen the death of the head of the family recently and is trying to cope with the loss and reach a better financial condition with the help of insurance pay-outs.

We are providing students with essay samples on a long essay of 500 words and a short essay of 150 words on the topic “A Raisin In The Sun” for reference.

During the times of the Great Depression, many parts of America suffered from severe forms of racism. The southern parts of Chicago were no such exception. The story of how racism affected the lives of the Youngers, a black family, is the main plotline of this play. Being black, the Youngers face a life full of hardships.

The living condition of this family depicts how they are the victims of racism. They live in a low-class estate, and they have faced tremendous social downfall. The family of five live in extreme conditions of poverty, and their two-bedroom flat is in a state of total ramshackle. The head of the family, Walter barely makes a living; he is a limousine driver. His wife Ruth is satisfied with the conditions of living, but Walter wishes of more fortune by making investments in a liquor store.

The play begins when Walter’s father has recently passed away, and he and his sister Beneatha along with their mother Lena are waiting for the insurance pay-outs. Lena chooses to spend some money on a better house, and eventually chooses an all-white neighbourhood, Clybourne Park, as it comes cheaper than a black neighbourhood.

The rest of the money she gives to her son and makes a provision that he saves some for his sister’s education. Walter gives the money to his acquaintance Willy, with whom he wishes to run the liquor shop, but Willy steals it. One fine day they receive a visitor, who is the representative of the neighbourhood and expresses his wish of buying the house. He places his reason being the Youngers will not fit in the neighbourhood. This incident depicts the presence of a racist mind in the people of the nearby houses. Walter, who initially refuses, later thinks of accepting this offer as he has lost all his money.

On the other side of the story, there is the perspective of Ruth, who is Walter’s wife. During the initial parts of the play, she finds out that she is expecting another child. When she already has Travis, she gets worried that there will be an extra mouth to feed, and considers abortion. The perspective of Beneatha towards life is also very different from the rest of the family members. She tries to fit into the norms of the white society and is also portrayed to be materialistic. She has two suitors, George and Joseph. She rejects George and is rectified by Joseph on her materialistic outlook. She agrees to move with Joseph to Nigeria for medical practice.

The family eventually decides to move out of the house, and leave their future to their fate. The family becomes optimistic and hopeful, and they decide to stick together. They hope that by doing so, they can defend their dreams better and can live a more beautiful life. This play depicts the need to disrupt the roots of racism from society and also depicts the need to follow our dreams and give value to it. 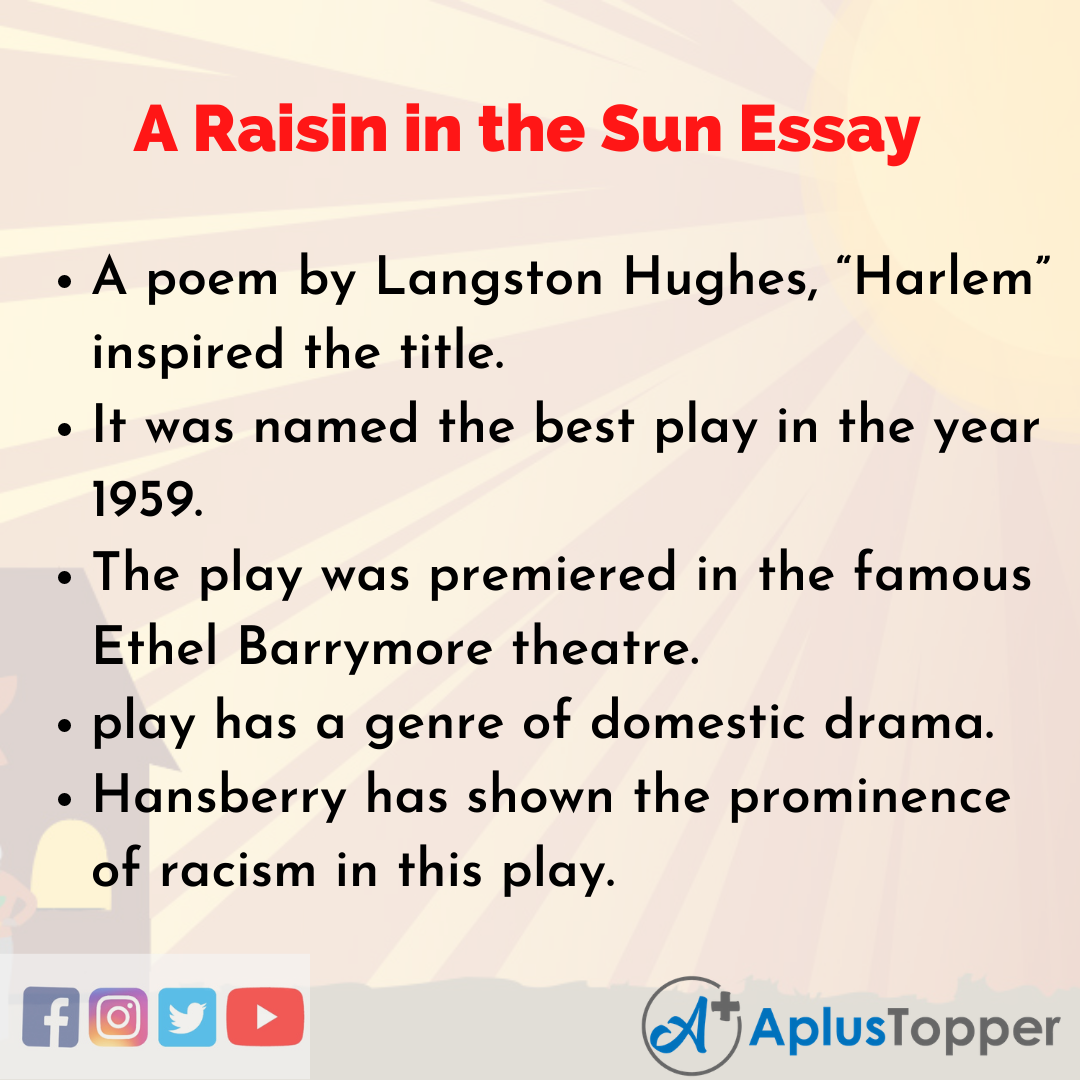 The play by Lorraine Hansberry depicts the life and struggle of a black family in the southern parts of Chicago. It shows the struggle the blacks had to face in the then American society through this story. The Youngers face all forms of racist comments and behaviours from their neighbours when they decide to move into an all-white neighbourhood.

The play also depicts the importance of dreams in one’s life. The value of dreams and their purpose is extremely important. Every member of this five-member family has different dreams. One wants to become a doctor, while another wants to provide for his family.

Another notion that is beautifully depicted in this play is the importance of family. This socially estranged family finds solace and strength in their family members. They try to put the wishes of the family before their own. They believe that by staying together, they can strongly defend their dreams, and converges their individual dreams to a collective one.

10 Lines on A Raisin in the Sun Essay in English

1. A poem by Langston Hughes, “Harlem” inspired the title.
2. It was named the best play in the year 1959.
3. The play was premiered in the famous Ethel Barrymore theatre.
4. play has a genre of domestic drama.
5. Hansberry has shown the prominence of racism in this play.
6. The life of an African-American family is depicted in the play.
7. The play is based on the South Side of Chicago.
8. The play was adapted for many films later.
9. Raisin was the musical version of this play.
10. The play was considered to be risky for investment. FAQ’s on A Raisin in the Sun Essay

Question 1.
When was the play published?

Answer:
The play by Lorraine Hansberry was published in the year 1959.

Question 2.
How was the play received?

Answer:
The play depicted the life of a black family. It was considered to be quite risky for investments, and there were many contradictions regarding its presentation.

Question 3.
How is Clybourne Park related to this play?

Answer:
The life of the white people who lived in the house before the Youngers are depicted in the play Clybourne Park.

Question 4.
What is The Raisin Cycle?

Answer:
The two plays, “Clybourne Park” and “A Raisin In The Sun” are together termed as the Raisin Cycle.