During the last few months, there have been many railway accidents. The losses incurred, both to life and property, due to these accidents are immense. In July, there occurred a serious accident between Frontier Mail and Bombay Express near Ratlam Station. It occurred during the early hours of the morning.

As the two trains collided with each other, there was a deafening sound. Everybody was paralysed on hearing the dreadful noise. Soon, it was discovered with great shock and dismay that two trains had collided. People immediately woke up and rushed to the ill-fated spot. 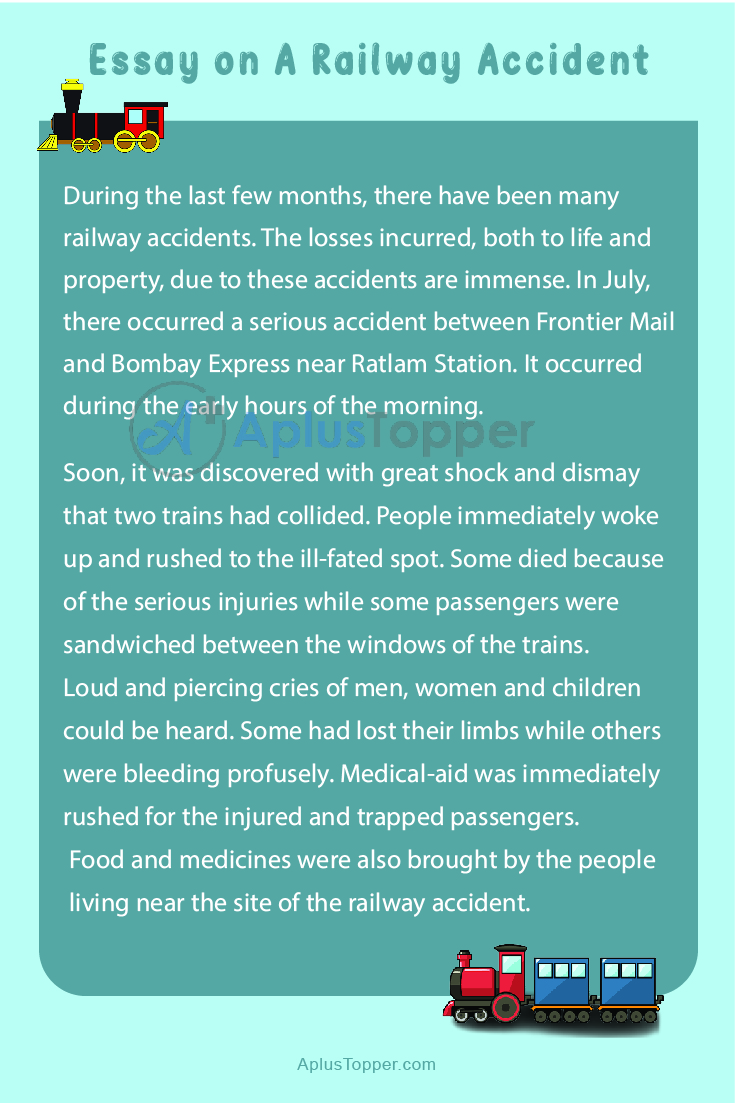 The scene at the accident spot was very tragic and pathetic. The engine of the Frontier Mail, after ramming into the Bombay Express engine, forged deep into its compartments. Both the trains were badly damaged. The passengers of trains were in a state of shock. Some died because of the serious injuries while some passengers were sandwiched between the windows of the trains. Loud and piercing cries of men, women and children could be heard. Some had lost their limbs while others were bleeding profusely. It was a scene that would have shaken the most stoic person. The luggage lay broken and scattered. The belongings of the passengers were lying strewn around the site of the accident.

Medical-aid was immediately rushed for the injured and trapped passengers. Vans and ambulances came to the rescue. First-aid was soon given to the victims of this ill-fated collision. Some passengers were carried to the hospital in the ambulance while others who were not so seriously wounded, were given first aid. Food and medicines were also brought by the people living near the site of the railway accident. It was a terrible sight as there was only a pile of the dead and there were only a few survivors. People came from many places to identify their kith and kin and friends. The entire spot was full of victims, doctors, nurses, social workers and the relatives of the victims. It was the most tragic and heart-rending scene.

Later, people enquired about the cause of the accident. It was learnt that the signal man had given wrong signals. It was one of the most pathetic and disastrous accidents in the history of Indian Railways.