13th Documentary Summary Essay: The American documentary film, named 13th, released in the year 2016 directed by Ava DuVernay. The theme of the documentary mostly goes around the concepts of justice, race, mass incarceration throughout the United States of America.

The documentary draws its title from the 13th United States constitutional amendment. This amendment was adopted back in 1865 related to bondage abolishment and termination of involuntary services.

We are providing students with samples of Essay on an extended piece of 500 words and short writing of 150 words on the topic “13Th Documentary Summary Essay” for reference.

The documentary 13th, written and directed by Ava DuVernay, is a modern take on the slavery system of the United States of America. The film has featured numerous famous activists, politicians, from both the leading parties of the United States, eminent academicians and other public figures. Some esteemed personalities who were featured in this documentary were news commentator Van Jones, social justice activist and American lawyer Bryan Stevenson, eminent political activist and academician Angela Davis, Newton Leroy “Newt” Gingrich, the renowned political leader.

The film starts with the famous speech of Barrack Obama, where he mentions about the United States having only 5% of world population, but as much as 25% of the prisoners of the world. America had been the hub of slavery in history. With the 13th amendment, that came during the Reconstruction period, the expectation of the former slaves to be finally free rose high.

Through this documentary, the filmmaker explores a particular loophole in this amendment. This amendment keeps the provision of legal slavery; that is, slavery is legal as a form of criminal punishment. This documentary explored the ways this system of slavery contributed to the racism that exists in America today. The southern states of America highly criminalized petty offences, using this as an excuse to arrest freemen and force them to work. The south is blamed for being often depriving the blacks of all forms of political participation. The documentary also pointed out the malice spread by “The Birth of a Nation”, where Ku Klux Klan was portrayed burning crosses.

She portrays the “The Birth of a Nation” as something parallel to the present political system. This particular film showed the segregated bathrooms for people of a different colour, and black people were seen as nothing less than a criminal. This scenario is somewhat still present today, according to the documentary.

Ava DuVernay shows us various instances that contributed to the Black Lives Matter movement. She draws the example of Emmett Till, a teenager of mere 14 years, who was brutally lynched in broad daylight. His had committed two crimes, one, he was an African American, and two, he was flirting with a white woman. She also portrays the recent incident of shooting Trayvon Martin. Coincidently Martin was also an African American.

Ava DuVernay criticizes both the political parties of the United States. She is critical of Hillary Clinton’s choice of words for describing the younger generation of the African-Americans. Clinton used the term “super predators”, which DuVernay critiqued as derogatory. DuVernay also scrutinized the methods of Donald Trump, as he advocated the death penalty of innocents of the 1989 Central Park Five.

DuVernay puts forward several questions in the documentary that should be asked to our conscience. She puts forward the question if the African Americans were free in the “true” sense. She reveals the societal dangers of racism and how America still practices it. Racism is eradicated, but it has its seeds in the subconscious of every American. In the end, a beautiful picture of African Americans enjoying recreational activities is shown, which gives hope for a better future. 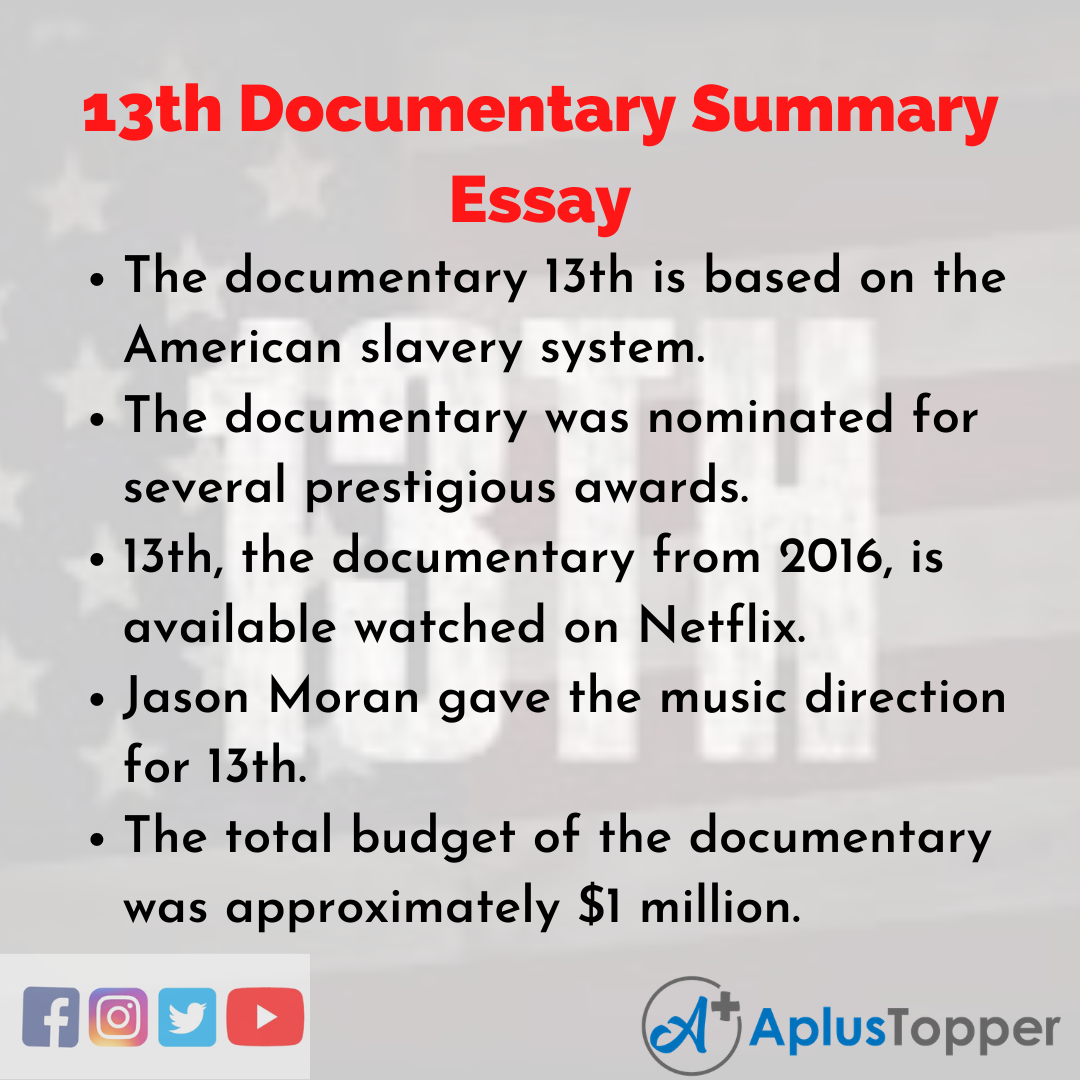 Ava DuVernay, in her documentary, 13th, draws out a picture of slavery and racism that still exists today in America; although not in a tangible form, mentally. 13th points out how much harm can be caused by slavery, even though the constitution negates such a possibility.

DuVernay explores the loopholes created by the 13th amendment to the American constitution, which legalized slavery as a criminal punishment. She draws numerous real-life examples of how racism has crept into the minds and shows the incidents of Trayvon Martin’s shooting or Emmett Till’s public lynching. DuVernay interviews several prominent personalities who spoke about their views on the topic. These interviews form the backbone of the presentation.

She portrays the effects of demonetization on the black community, which only served futile political needs. At the end of the documentary, DuVernay poses some questions like if the concept of slavery was truly eradicated from America. The fatal shootings of black people by white police officers form the climax. Question 1.
Where was the documentary first opened?

Question 2.
How was the documentary rated?

Question 3.
Who has written the documentary 13th?

Answer:
This documentary was both written and directed by Ava DuVernay. She also wrote the famous Selma in 2014.