Water is Precious Essay: Water is an essential part of all living beings on planet earth. It’s one of the elements without which life cannot exist. Water grants us food and livestock security, maintains organic life and industrial production. Therefore water is required to conserve the biodiversity and environment.

Planet Earth is known to be the only planet in the universe to contain this compound of hydrogen and oxygen in such abundance till now. So we have to realize how precious and valuable it is to us humans and the environment.

We provide children and students with essay samples on a long essay of 500 words and a short essay of 150 words on the topic “Water Is Precious” for reference.

Long Essay on Water is Precious 500 Words in English

Water is one of the essential things that lets life thrive on this planet. Thus, the significance of water can be compared to the significance of air. All living organisms, animals or plants, everyone is entirely dependent on water. Though water is a necessity to all living being on earth, having enough water and healthy drinkable water is a rare commodity across the globe. The planet consists of 70% water, among which 97.5% of water is found in the oceans and is salty, and only 2.5% is potable freshwater.

But much of the freshwater gets contaminated and may contain minerals as well as organic impurities. Sometimes this contaminated water spreads bacteria causing epidemics such as cholera and typhoid. It is estimated that around 790 million people (11% of the world’s population) don’t have access to an improved water supply.

Nowadays, the cases of contamination of water sources are relatively common, with many industries sending out their effluents into the ocean without proper sewage treatments. This leads to the destruction of marine life and indirectly affects the life on land. When contaminated water is released onto the oceans, the marine life engulfs the impurities and later when humans consume the aquatic animals, they get affected with the harmful impurities and chemical but in a much bigger scale. This phenomenon is called bio-magnification.

Thus the water needs to be adequately filtered before getting released into the oceans. This is one way to ensure that the water in our water bodies does not get contaminated. Water may seem to be in abundance in the cities, but it’s not the same for all the parts on earth. There are so many places where an ounce of freshwater is a luxury. Due to climate change, so many small water bodies like streams and ponds are drying up in the lesser commutable areas giving them no access to drinking water.

People worldwide are suffering because of water deficiency. The underground water resource is not a sustainable source. It is likely to dry out and get contaminated with minerals like arsenic, lead and iron if we mindlessly keep using it. There are several ways in which water is getting wasted. Rainwater is a source of water that can be harvested, but most of the population is ignoring that which leads to wastage of tones of water every year. Tap leaks and careless water spills are also an issue.

India has sufficient water potentiality enough for its population, but severe disregard and lack of monitoring of water development projects, several regions in the country experience water deficiency from time to time. Further neglect will cause water scarcity in the next few decades. Thus it’s necessary to prevent this crisis by utilizing technology in the best way and spreading awareness to conserve the existing water resources, to make efficient use of water for agriculture, industrial production, human consumption and saving resources for the future generations. No water is equal to no life, and no future. 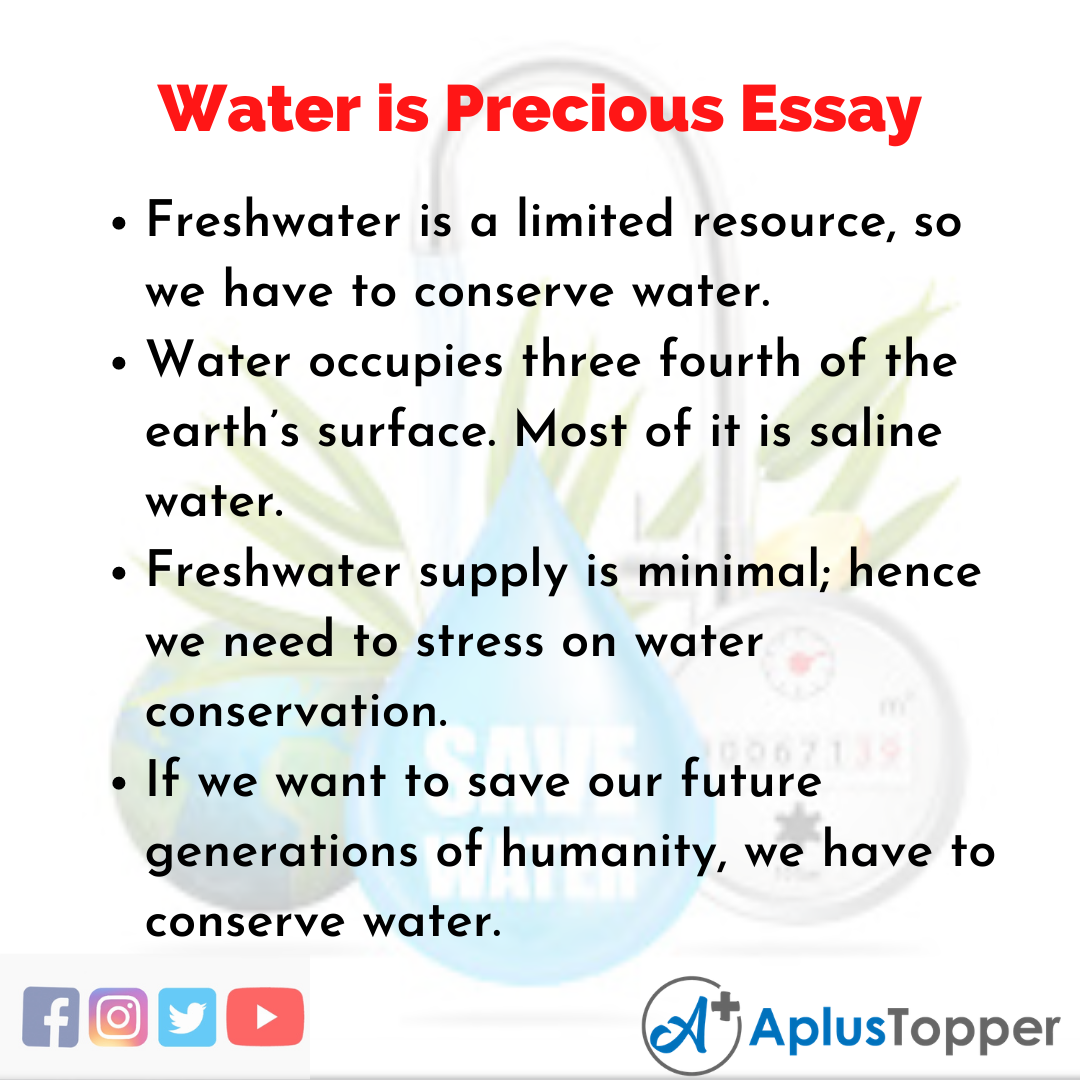 Short Essay on Water is Precious 150 Words in English

Water is the most precious gift for humanity by nature. Earth is the only planet to harvest life just because water is there to sustain it. The earth consists of 70% water and among which most of it is saline, and only 2.5% is drinkable. But because of extreme water contamination, unnecessary wastage, climate change which is resulting in droughts and extreme weather conditions, many people around the globe are facing water scarcity crisis.

This precious substance which is being carelessly utilized by humankind and its demand is increasing due to the growing population and unsuitable lifestyle. Nowadays, many nations are facing a severe water crisis. We have to conserve clean water for the present and future safety of humanity. We should act responsibly and start with water conservation methods, such as rainwater harvesting, recycling, etc. We should know that water conservation is necessary to save our future generations, to save our humanity.

10 Lines on Water is Precious in English FAQ’s on Water is Precious Essay

Question 1.
How water is precious in our life?

Answer:
Water is an essential part of all living beings on earth. Plants and animals could not survive without water.

Question 2.
Why freshwater is exceptionally precious to us?

Answer:
Its vital for all living organisms and major ecosystems (about 9000-25000 plants and animals species depends on freshwater ecosystems), as well as human health, food production and economic development. Freshwater is used for human consumption, cooking, cleaning etc.

Question 3.
What is the rarity of water?

Answer:
Barely one per cent of freshwater – 0.007 per cent of all the water in the world, is easily accessible.