The man in Figure is not going to the outer space. Fie is actually a deep-sea diver wearing a magnesium alloy suit which can withstand high underwater pressure. This is because pressure in a liquid increases with depth. 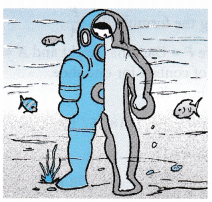 Formula for Pressure in Liquids 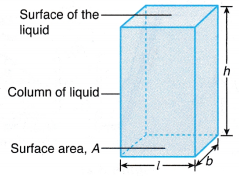 Applications of Pressure in Liquids

Ways to Reduce the Negative Effects of Pressure in Liquids

B. Relationship between Density and Pressure in a Liquid
Method:
The above activity is repeated by replacing water with alcohol (density 800 kg m-3) and then, with glycerine (density 1300 kg m-3).
Observation:
It is observed that for a fixed value of h, the values of l is biggest for glycerine followed by water and then alcohol.
Discussion:

Example 3. Figure shows a submarine travelling from the surface of the sea to a depth of 6000 m. 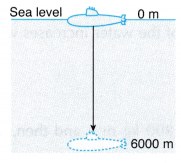 Example 4. Figure shows a farmer’s ingenious method of drawing water from a pond located at a nearby hill by using a metal pipe. Water rushing out of the holes at the lower end of the pipe irrigates his plants. 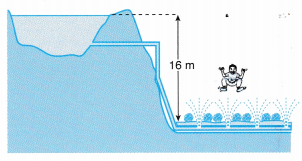 Example 6. A scientist has invented a robot to work at the seabed. According to his calculation, the armour of the robot can withstand a maximum pressure of 106 Pa exerted by the sea water. If the density of sea water is 1025 kg m-3 and g = 9.8 N kg-1, what is the maximum depth of the seabed that this robot can work at?
Solution: