Question 2.
What were the stone tools used for by the people of the Paleolithic Age?
Answer:
The Palaeolithic humans were the first to make stone implements. Earlier, they used stones as they found them and then threw them away. Later, they began making crude unpolished stone tools. Large pieces of stones were shaped into hammers, scrapers and axe heads. These tools were used for cutting trees, killing and skinning animals, chopping meat and digging up roots.

Question 3.
Where did the early humans live in the Old Stone Age?
Answer:
Early humans did not build houses. To protect themselves from wild animals, they took refuge in caves or on trees. Caves protected them from the elements of nature and bad weather conditions.

Question 4.
What did the people of the Old Stone Age eat?
Answer:
The people of Old Stone Age did not know how to grow crops. Their food consisted of fruits, roots, nuts, eggs of birds and raw flesh of animals and birds.

Question 5.
What did the early humans in the Old Stone Age wear?
Answer:
During this period, humans did not wear clothes. Gradually, they learnt to use the barks of trees, leaves and animals skins to protect their bodies from the cold and the rain. Later still, they made clothes by stitching animal skins with bone needles.

Question 8.
What is the Copper-Stone age known as?
Answer:
The period, known as the Copper-Stone Age or Chalcolithic Age, was a brief but significant period in the life of humans. This period extended roughly from 4000 bce to 2000 bce.
It was an age during which both copper and stones tools were used. This age was a period of transition. It marked the end of the New Stone Age and the beginning of the age of metals.

Question 1.
Describe the life of prehistoric humans in the earliest times. When did the modern human Anally appear?
Answer:
In earliest times, prehistoric humans lived alone in caves or other natural shelters. They ate wild berries, roots, fruits, insects, worms and flesh of small animals. They used their bare hands to kill small animals. They did not wear any clothes and their bodies were covered with thick hair.
The modem humans (Homo sapiens) finally appeared about 200,000 years ago. They had mastered the art of making tools.

Question 3.
How did early humans discover fire? How did this discovery help them?
Answer:
Early humans found that when two dry stones rubbed together produce sparks of fire. This discovery bought a great change in their life. They used it for roasting food, lighting his cave, keeping warm in cold season and frightening animals.

Question 4.
What important changes took place in the lifestyle of humans in the New Stone Age?
Answer:
In the New Stone Age human became a food producer from food gatherer. He gave up his cave and made huts of straw and mud and he also made better well grooved and more useful tools.

Question 5.
Give an account of the religious beliefs and practices of the people in the Neolithic Age.
Answer:
Early humans did not understand natural phenomena. They were afraid of lightning thunder, seasonal changes and natural calamities such as floods and earthquakes. They saw them as mysteries that were beyond their control. So they began to worship the forces of nature and sky, sun, rain, thunder, lightning, etc., became their gods. Ceremonies were performed to please them. Later, people began to bury the dead. Items of daily use such as pottery, tools, weapons, food, etc., were placed in the graves. This suggests that they may have believed in afterlife.

Question 7.
Why did early humans make pots? How did the invention of the potter’s wheel affect the art of pottery making?
Answer:
Early humans make pots because they needed pots to store grains, water and food.
The invention of the potter’s wheel was boon for potters. They made pots of various shapes and sizes, pots were often decorated with floral designs and geometrical patterns.

Question 8.
Describe the following features of the Neolithic Age:
(1) Invention of the wheel
(2) Settlements and early villages
Answer: 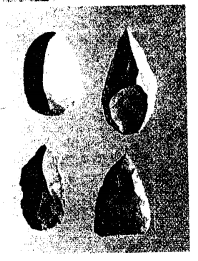 4. Mention five important changes that took place in the lifestyle of humans of this period.
Answer:

Question 2.
Name the tools and implement used by man when he became a food producer ?
Answer:
The names of the tools are sickle hand axe, choppers, flakes, bows and arrows.

Question 4.
How was the discovery of metals useful to the Early Man?
Answer:
The discovery and use of metal is an event of great importance in the history of mankind.

Question 5.
Describe the social life of early humans?
Answer:
Early humans began to form small groups to protect themselves from wild animals. They lived a nomadic life, moving from place to place in search of food.

Question 6.
When the Iron Age began and what is its importance?
Answer:
The Iron Age began in about 1,200 BCE when iron implements began to be used. Discovery of iron encouraged the growth and spread of civilization.